If you’re looking for a howling good time, OJO’s Wolf Run slot will do the trick. This legendary 5-reel game has variable paylines, Stacked Wilds, Free Spins with the up to 255 Respins and a maximum win of £250,000.

After its staggering success in land-based casinos, the online version of the Wolf Run slot was released in 2012 by global game supplier IGT in 2012.

Similar success followed with online slots players and this Wolf Run™ slot is now consistently ranked among the world’s most popular slots both online and offline every year. Stick with us for the ultimate Wolf Run slot review and you’ll discover what gives this ol’ slot its bite!

The Wolf Run slot was born in a simpler time before the internet began, but IGT have resisted the temptation to update the game’s graphics and features, sticking instead with the trusted formula that made its Wolf Run slot machine a global hit.

That means a classic slot vibe with a static background, limited animations and a focus on the gameplay and most important bonus feature. 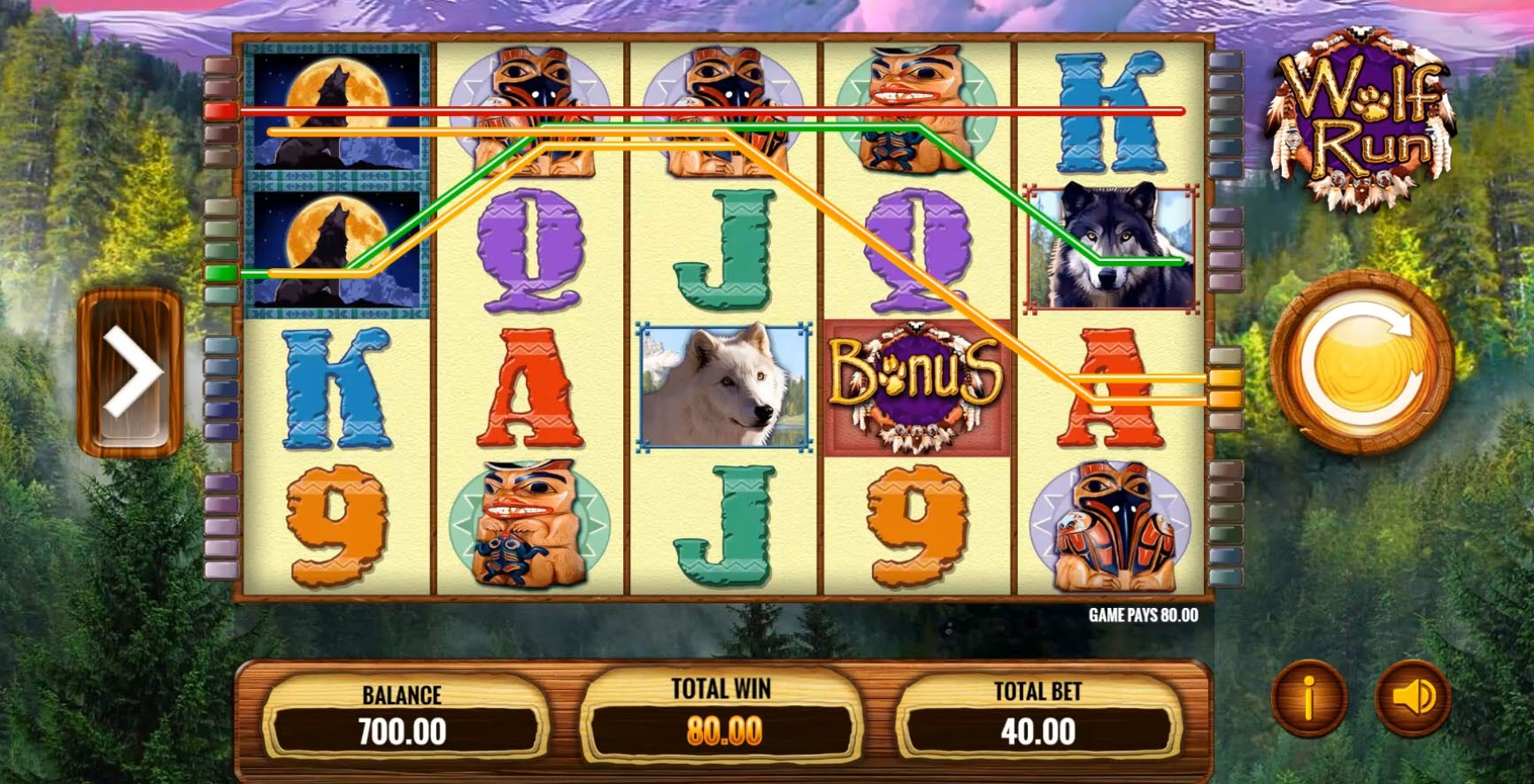 Wolf Run was created for American casinos – and perhaps especially the Indian reservation casinos – so IGT chose a theme that resonated with native American culture and traditions.

The game is set in a mountainous wilderness, the natural habitat of the North American grey wolf which plays such an important role in native American lore.

From the snow-capped mountains to the pine forests and wood trim used for the reels and gameplay buttons, everything in the Wolf Run slot game says ancient tribal culture and outdoor adventure.

Although you’ll notice hints of unusual colours in the base game, it’s during the Free Spins feature, that the game comes to life. The theme turns dark with an emphasis on purple, a dark night sky contrasting with the eerie glow of the mountains and forest. Even the reel symbols get a dark background, adding to the sense of drama. 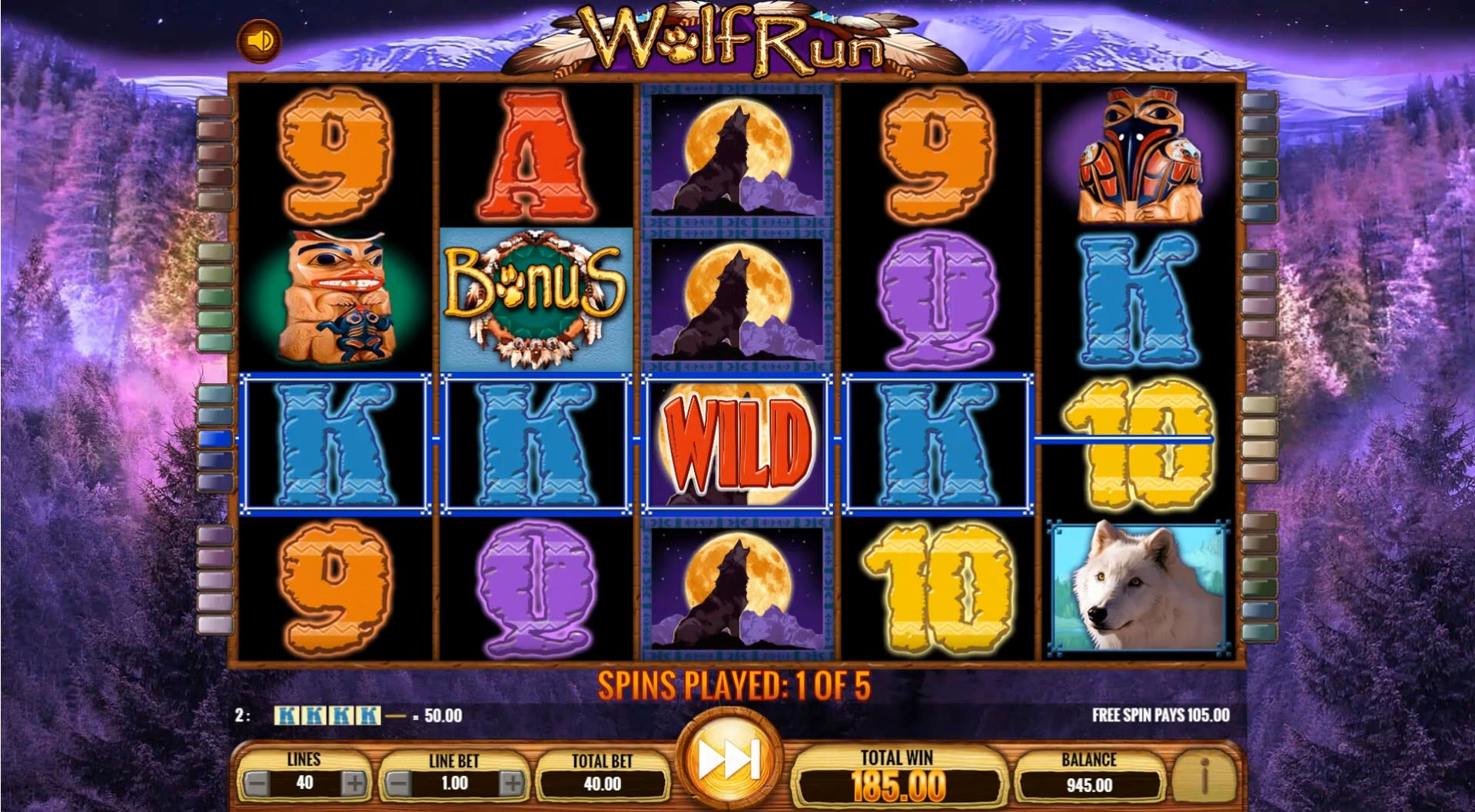 Further up the money tree, you get 2 types of American Indian totem-style carving, white and dark wolves and most valuable of all, the howling wolf silhouette on front of a full moon. The Bonus scatter symbol is represented by a native American Indian headdress.

No background music and minimal sound effects here, so we’re left with the jingle that plays while the reels spin. It’s a sort of cosmic, 80s electro keyboard concoction you often find with land-based slots. Although it doesn’t exactly match the mountain wilderness theme, it delivers a full dose of vintage casino slots nostalgia, so it’s OK by OJO!

Wolf Run is a 5-reel 4-row online slot with up to 40 paylines. With no Wolf Run slot games demo version on offer, you’ll have to get stuck into the real money game and for that, you need a bit of cashish! Pick one of OJO’s super slick payment methods and get your stake & chips ready to roll. 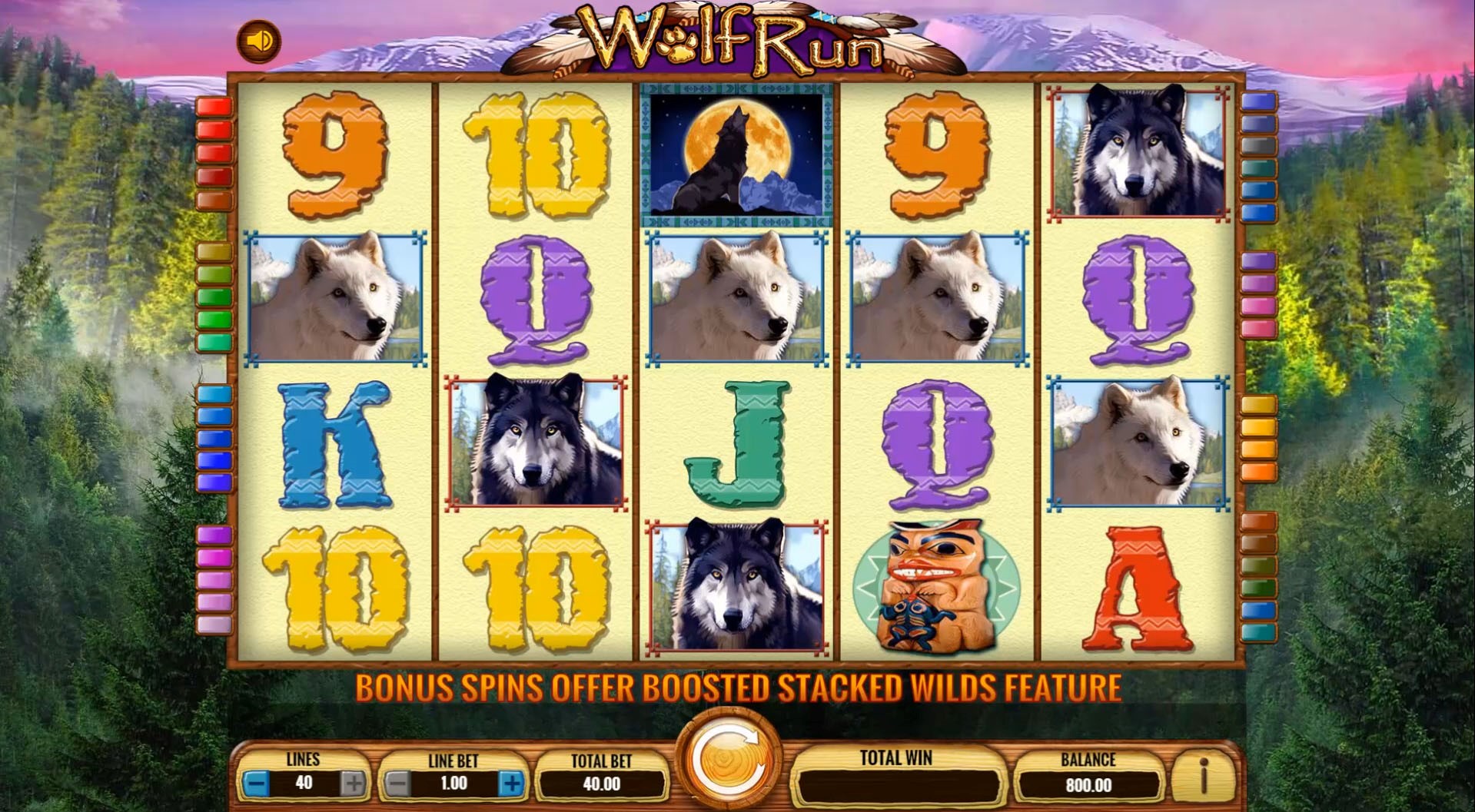 Although you can play 1 line and eek out your bankroll until you’re into your dotage, it’s better to play more lines with a game which uses Stacked Wilds.

Why? Play just 1 line and you’re relying on a single Wild symbol to substitute for another symbol to create a payline win. Any Stacked Wilds above or below your payline are wasted.

Play 5 lines, for example, and a reelful of Stacked Wilds can really power-up your balance with multiple payline wins. In that respect, OJO’s personal preference is to play 40 x 1p lines rather than 1 x 40p line. His other advice is simply to play the Wolf Run slot game within your limits. Responsible gaming at all times, chief!

Before we get to the rules of the Wolf run slot game, it’s worth noting that IGT haven’t added any extras to the online version of this game. No turbo spins, no autoplay, just no frills, back-to-basics slotsplay. Seconds to learn, and a lifetime to enjoy!

There are two main ways to win on our Wolf Run slot, matching 3 or more symbols on a payline in the base game, or triggering the Free Spins feature.

With the assistance of Wilds, multi-line wins and Free Spins, you could win many more times that sum and according to the official bumf, you can win up to £250,000 in a single Wolf Run slot spin. Most players won’t be stumping up £400 a spin however, so you should set your sights a little lower! (hey, five figures ain’t chicken feed though, right?)! 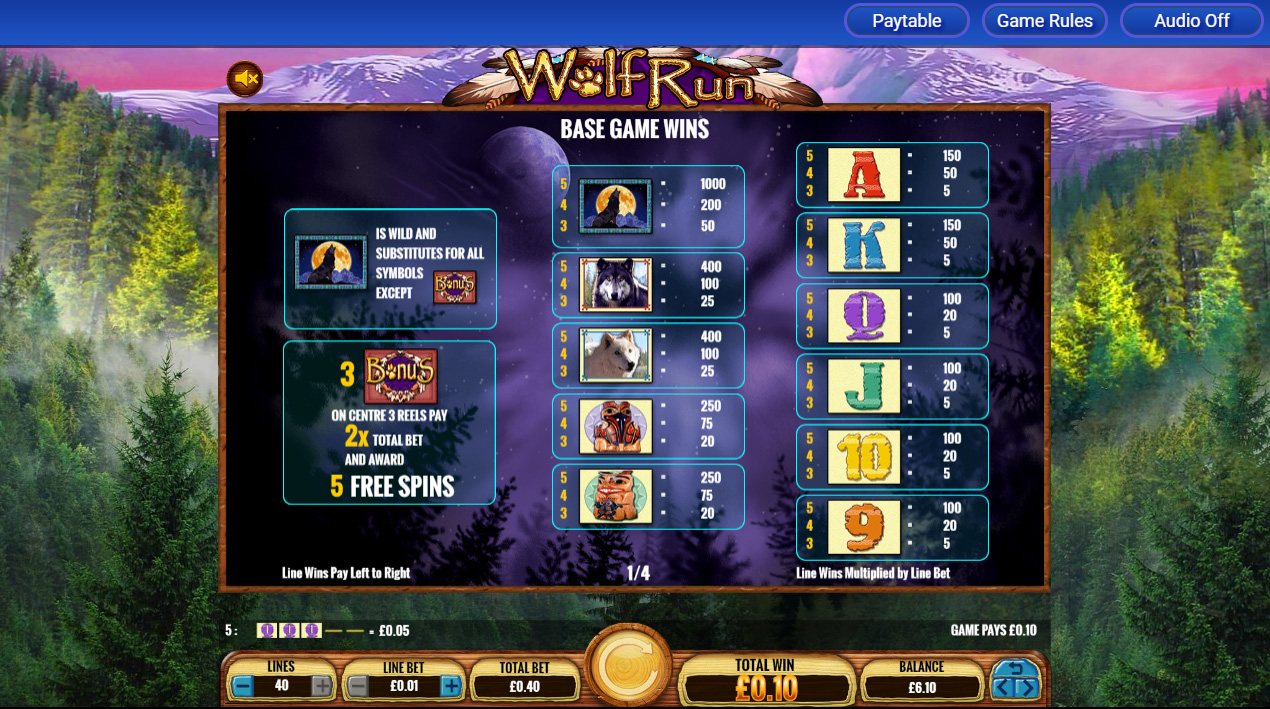 OJO cranks that Wolf Run RTP up a little more by giving you money back on every spin, too. Get the lowdown on how OJOplus works and see why slots play fairer at PlayOJO.

OJO’s Wolf Run UK online slot is designed with medium or ‘balanced’ volatility, which means it has an even mix of hit frequency and payout. If that’s still too industry-jargon for ya, it’s the Goldilocks of slot maths. Bonus triggers and base game line wins are neither too rare nor too frequent, and payouts fall within a moderate range. 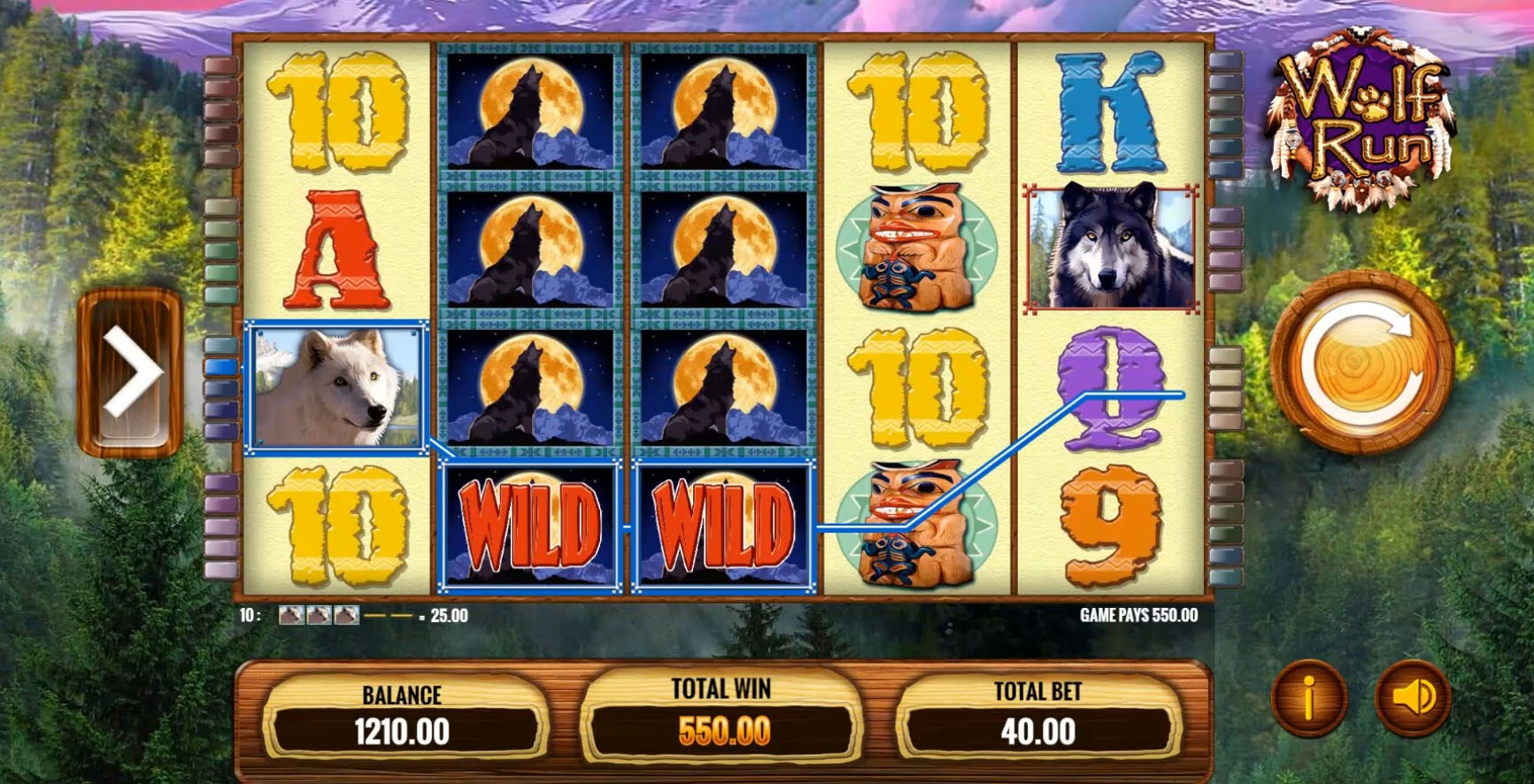 Wolf Run slot game was the first IGT game to include their Stacked Wilds feature. Each Wild symbol substitutes for all symbols except the Bonus scatter, but more importantly each reel comes loaded with stacks of 4 or more Wilds which opens up the chance of huge multi-line wins or as IGT put it, ‘explosions of wins’ on the same spin. 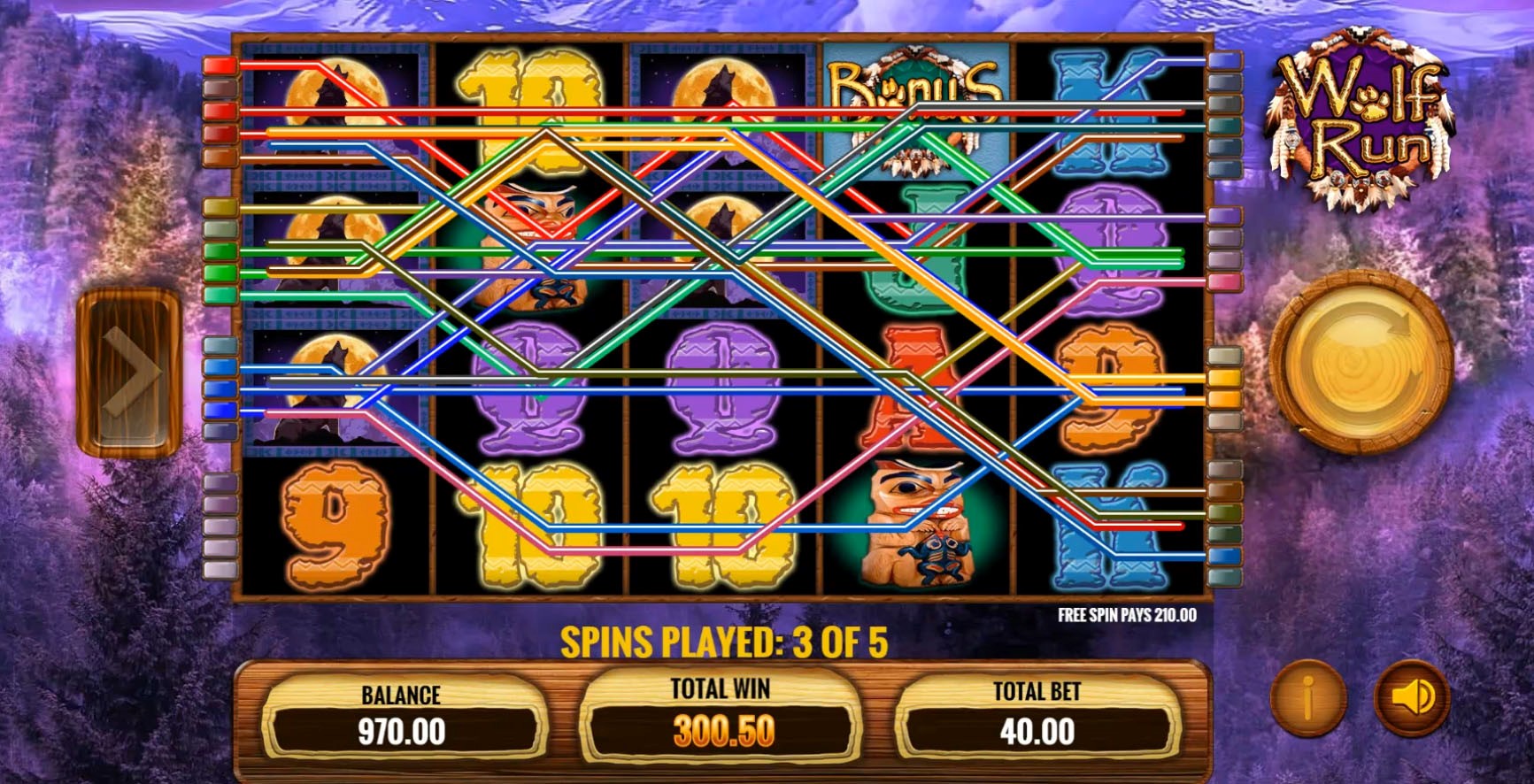 Hit 3 Bonus scatter symbols in any position on reels 2, 3 and 4 and you’ll win twice your total bet for that spin, and trigger 5 Wolf Run Free Spins. Stacked Wilds are apparently ‘richer and more plentiful’ so we assume there are even more Wild symbols on each reel.

You’ll also find more Bonus scatters on each reel, and if you land 3 or more again during Free Spins, you’ll trigger 5 more Free Spins, up to maximum of 255 Free Spins per bonus game.

If anything, you’ll enjoy the game even more if you play Wolf Run slot on your mobile, where fancy graphics have less of a say. There’s also something to be said for the contrast of old online slots game and new technology.

As you’d expect of modern mobile games in the UK, the settings and controls have been streamlined so that once you’ve made your choice of paylines and coins per line, all you need is a spin button and a little luck.

Like our Wolf Run slot machine but want to play for the kind of life-changing wins you get with our Mega Moolah game? IGT’s Wolf Run MegaJackpots slot game is identical in every way, but with the addition of IGT’s MegaJackpots progressive jackpot. It’s pretty easy to understand how the jackpot works and there are a number of ways to win.

Fill the reels with 20 Mega Jackpots symbols and you’ll win the massive progressive jackpot instantly. If you don’t win the jackpot on any spin, a behind-the-scenes ‘second chance draw’ could also net you the jet-setting, Bugatti-buying prize pot.

Your chances of winning are also affected by how much you bet. The more you bet per spin, the better your chances. A player who bets 20p per spin has twice as much chance of winning the jackpot as someone who bets 10p.

The incredible success of IGT’s Wolf Run slot is proof that slicker graphics and more bonus features don’t always win the hearts of slots players. Wolf Run might not have the shiniest coat or loudest roar, but for one reason or another, it’s a perennial contender for slot of the year alongside other classic slots like Play OJO’s Rainbow Riches that made the transition online.

With a Free Spins feature at its core, Wolf Run is stripped-back casino gaming with more than a hint of the golden age of land-based slots.

What do you make of it, amigo?

Wolf Ridge! Another IGT slot with a magical wilderness vibe, this 30-line slot also has Stacked Wilds and a Free Spins bonus feature as well as an interesting Prize Disk feature we’ve not seen before that OJOers will go wild for!