Thunderkick is a Swedish independent game studio famous for popular Thunderkick slots like Pink Elephants and Carnival Queen, and without exception their games are unmistakeably cool. If you haven’t heard of them or their games before, you’ll be playing them in 5 minutes’ time. We guarantee it!

Looking at their unique take on traditional slot formats, Thunderkick is clearly not interested in following the herd. Sure, other games providers are pushing the boundaries of what online slots can do, but Thunderkick make slots like they’ve never seen one before, and the results are magical! It’s high time we kick off this Thunderkick software review and discover their craziest and most inspiring games.

Thunderkick is an under-the-radar independent games developer based in Stockholm, Sweden. Founded in 2012, the studio is led by CEO Jan Lunde, a former NetEnt account manager. The 40-something team of Thunderkickers is split between offices in Sweden and Malta, and they’re all dedicated to producing unique, premium quality games with outstanding graphics, audio and game mechanics – the full Monty.

As a B2B gaming tech supplier, Thunderkick is licenced and regulated by two of the best – the UK Gambling Commission and the Malta Gaming Authority. No messing around then, just a fair, square deal wrapped up in some of the best designs you’ll ever see! As with all OJO games, we want you to enjoy them responsibly too, so here’s some info you should read.

You won’t ever have to wait long for their next Thunderkick games either. Thunderkick release new games around once a month, and it’s impossible to predict what type of slot it’ll be! Just take a look yourself at the latest Thunderkick slots.

Like the Man From DelMonte, OJO prides himself on picking the tastiest games for our no-wager online casino from every corner of the globe. He went to Sweden and came back with 30 or so of Thunderkick’s best video slots and boy and boy, what a selection!

Although all of OJO’s Thunderkick games are video slots, they’re very different. Even so, it’s obvious Thunderkick are big on animated themes and that social gaming feel. 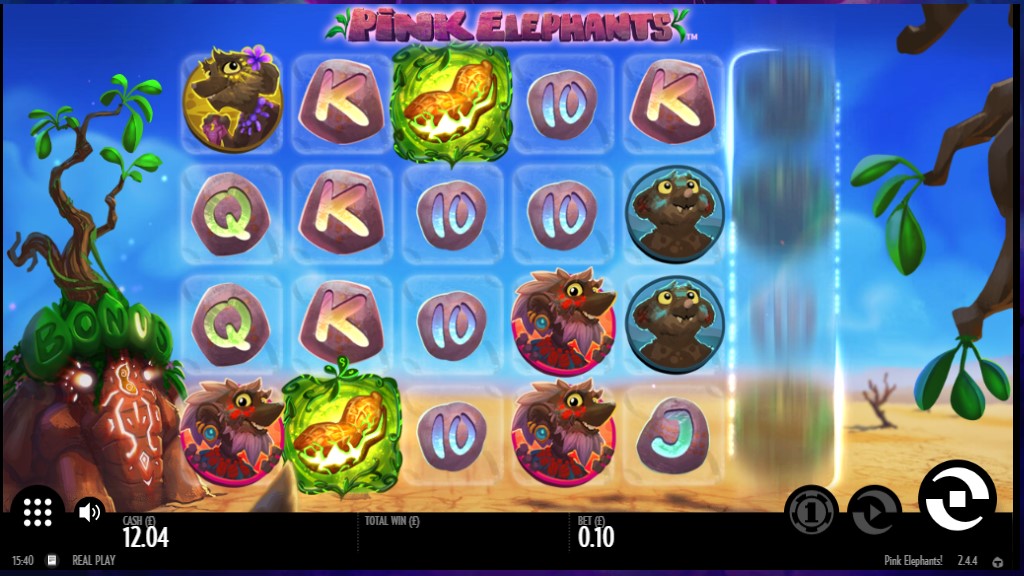 The themes, characters and backgrounds are designed with an amazing attention to detail that gives each game real depth. And it’s those little things - a nodding bird here, a winking Pink Elephant there, a perfectly chosen sound effect - that bring Thunderkick online slots to life.

Another hallmark of Thunderkick slots design is the incredibly simple, intuitive and stylish interface (gotta love those spin, autoplay and bet size buttons!). What about the animated backgrounds and almost total lack of traditional reel layouts?

If anyone in the Thunderkick studio ever slapped some regular reels on a static background, they’d get 20 lashes with the birch twigs (and not in the good sauna-style way). No, the Thunderkick team have freed themselves from the prison of slot tradition! 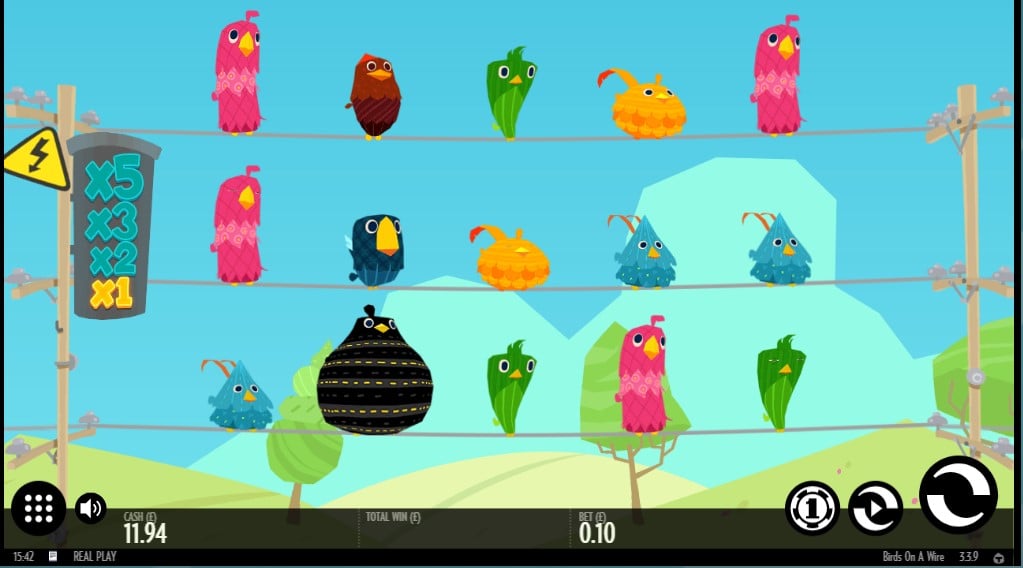 They exist on a different plane of reel consciousness. Sure, their maths engines use columns, rows and symbols, but they’ve come up with countless new ways to present them. Just look at Carnival Queen or the delightful Birds On A Wire (no birds were electrocuted in the making of this slot). Reels are out, floating symbols are in!

And then there’s Fruit Warp. It says 9 paylines but where are they? It’s just pieces of fruit floating about! And look at the fruit they chose. Dragonfruit and Star Fruit? Very Thunderkick.

They’re obviously game developers with a sense of humour too. Play Frog Grog or Explosivo Esqueleto, maybe their best casino game, and you’ll see what we mean. Just look at the gelato-genius of Sunset Delight! No one makes slots like that. Once you’ve tried a few of their games, you realise they’re reinventing slots, 1 genre at a time. 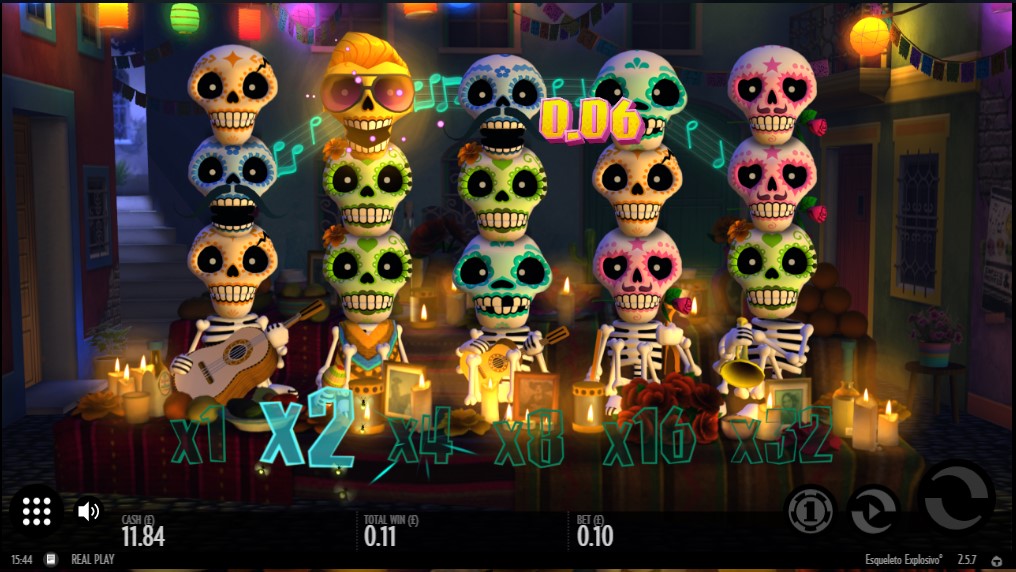 A quick squizz at almost any software provider’s back catalogue and you’ll see the usual mix of Celtic slots typified by our Barcrest Rainbow Riches slot as well as stars, gems, gods and animals. A solid basis for any sensible slots portfolio!

Not Thunderkick though. Their choice of themes is creative, alternative and full of delight. It’s a small portfolio but it manages to be diverse and unique. Thunderkick games have a bit of an international feel too, like they’re taking us on some strange cultural adventure from latin luchadoras to Japanese tokis via Mongolia! 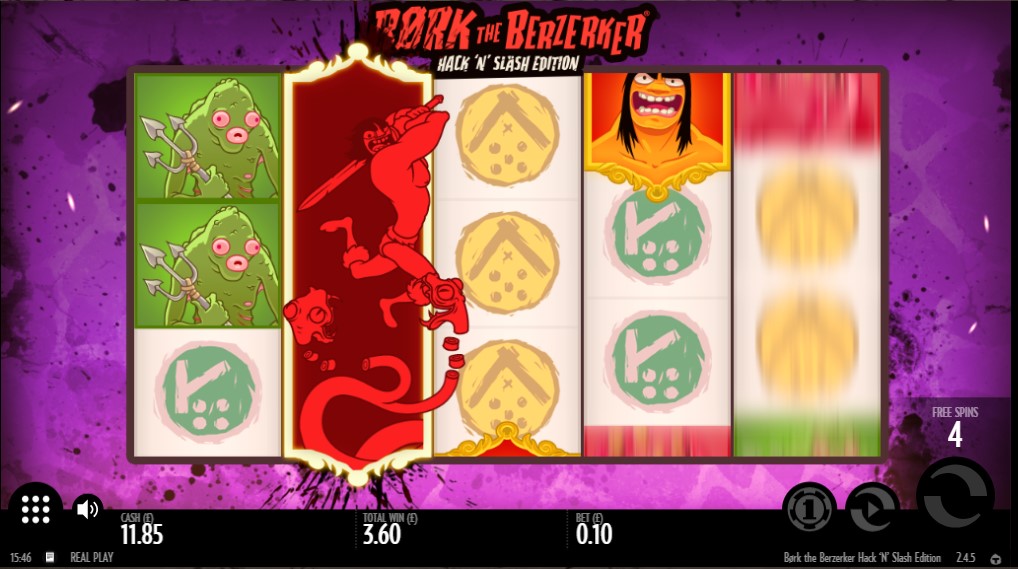 Whatever the theme, they figure out how to set it apart from the competition. It feels a bit like a window into the minds and influences of their developers. Even their take on Norse mythology, Børk The Berzerker, comes from leftfield.

No Viking gods here, instead we get a dark, postmodern comic book vibe, the kind of thing you’re more likely to see on a cult internet TV show. Amazing! They’ve obviously spent their youths playing 80s retro arcade games too, if Arcader, Spectra or Flame Busters are anything to go by.

Play a few of their titles (though you should try them all, chief!) and you’ll start to recognise the Thunderkick signature combo; Dropping symbols, multipliers and the Avalanche. To the man on the street, that’s symbols that fall from above instead of existing on a rotating reel.

Winning combinations then vanish and are replaced by the symbols above them (they call it Avalanche but other developers call it cascading reels), and with each Avalanche, a bigger multiplier is applied. Killer combo! 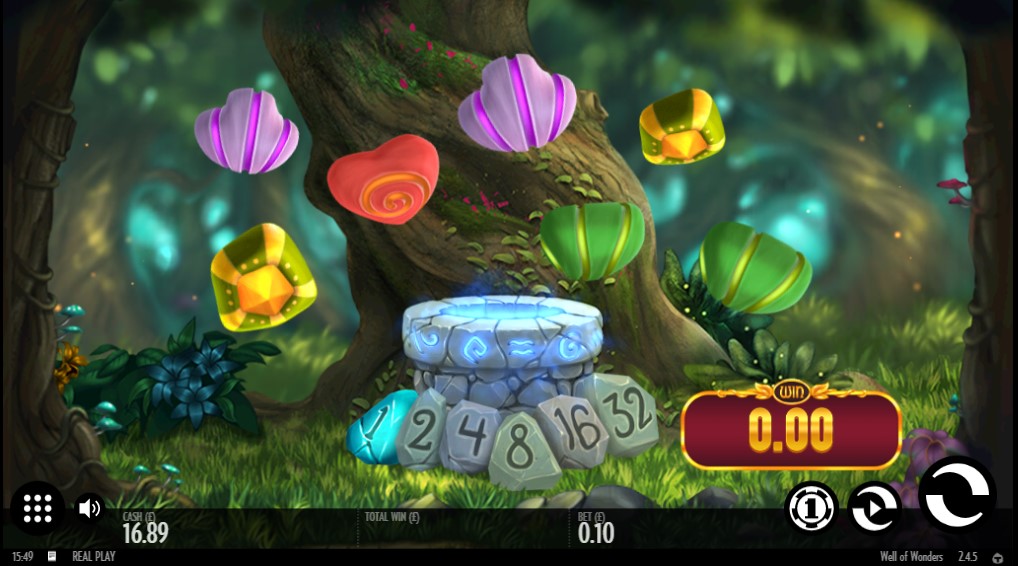 Design seems such as massive part of Thunderkick’s MO but their games are packed with great gameplay features that keep us guessing, just as we thought we knew how to play online slots. They vary the number of paylines like Federer varies his returns.

From the magical 7-reel 7-payline marvel that is Well of Wonders to the 243 Ways of relatively new Thunderkick slot Dragon Horn or the 4,096 Ways of Carnival Queen, paylines are just another tool in the Thunderkick box that helps them produce something special. Don’t forget their Magicious slot too, where the winlines pay both ways, left and right. 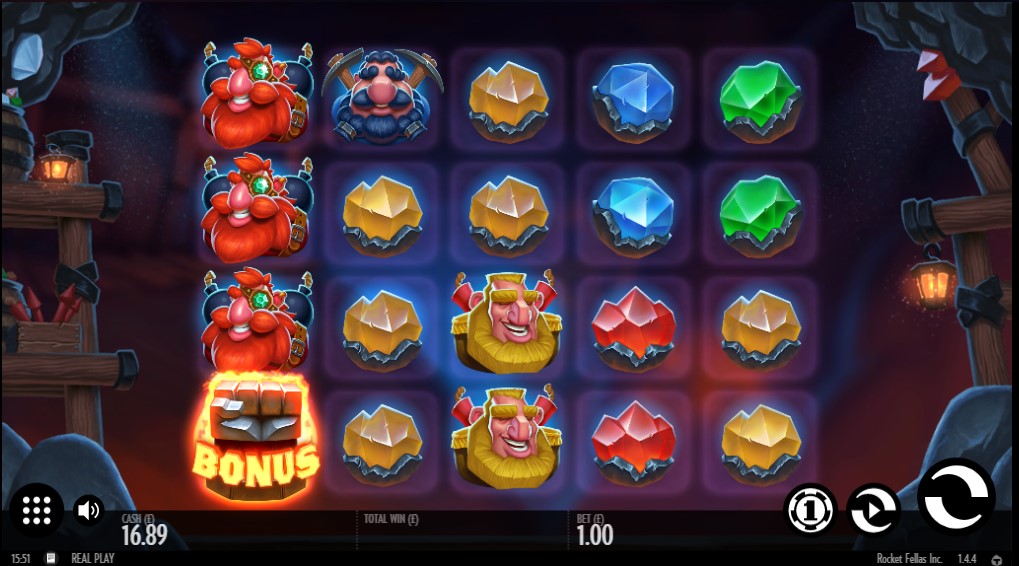 Bonus games with free spins are a regular occurrence, as are a stunning array of wilds, which they mess with for fun. Just look at the Random and Sticky Wilds of Rocket Fellas or the Expanding Wilds of the Falcon Huntress (surely the only Mongolian-themed slot on the planet?). And we haven’t even mentioned Sticky Respins yet….

With all this fancy footwork and our frankly gushing analysis, we shouldn’t forget the fundamentals, which they also get bang on. You can play most Thunderkick slots games from just 10 pence, right up to £100 a spin. Or you can try the Thunderkick demo versions for free.

Even without progressive jackpot slots, their payouts are as eye-bulging as you like. Game like Zoom award up to 1,500x your stake while some, like Midas Golden Touch, pay out over 10,000x your stake. Ker-ching!

Thunderkick slot games RTPs are virtually all 96%, give or take a 10th of a point. You might be able to find higher RTP slots out there, but Thunderkickers don’t seem to even countenance anything less. That tells us they’re making games for players, by players. 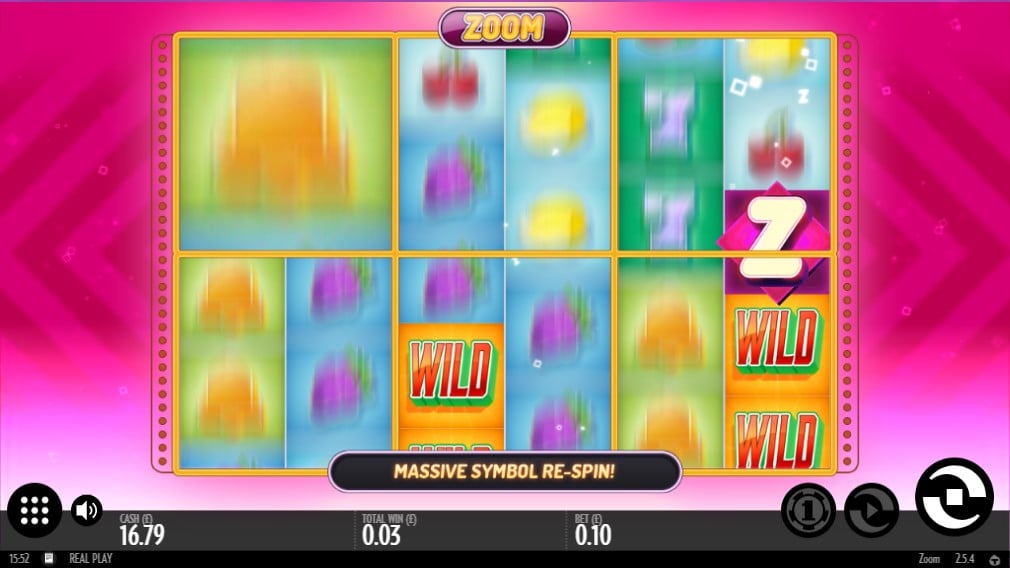 OJO knows it’s all about the players too, which is why he gives you money back on every spin of all Thunderkick slots with OJOplus. Bet a little, get a little back and it all mounts up! You can spend it whenever you like too, no strings.

Lastly, a word on Thunderkick’s best mobile casino games. If you’ve made it this far, you’ll already know that the slots Thunderkick makes are created with phones in mind (or you’re the Googlebot checking up on us - on your way, bot!).

One look at any Thunderkick desktop slot and you’ll notice how light it is on stuff – buttons, menus and the like - just like the mobile version. The simple, uncluttered style that serves them so well on desktop makes Thunderkick online slot games ideal for smartphone gaming. You can play their mobile games in portrait or landscape view, and do everything with one hand, no sweat.

With most software suppliers, their game library is like every album you’ve ever bought; some massive hits, some OK stuff and a few lukewarm fillers. Thunderkick’s portfolio is that rare beast, a greatest hits LP where there’s something to love in every track. That’s just one reason why Thunderkick slots are every bit as good as the best efforts from rivals like Microgaming, Yggdrasil or Play’n GO.

If you don’t go to the Games page right now and give one of their slots a try, you’re not my amigo, amigo. Let’s play!