Join the Lucky Wizard on his quest for mega wins!

OK, so the Lucky Wizard video slot isn’t the only example of the leprechaun-clover-horseshoe genre. But stick with us – it’s got some magic up its sleeve!

Red Tiger Gaming have gone the whole hog with this Celtic fantasy offering. That means lashings of vibrant green and gold! The action takes place in an enchanted forest (though we’re getting a Middle Earth vibe too), a vibrant magical world inhabited by the Lucky Wizard.

The gaelic lovechild of Gandalf and Gimli, the Lucky Wizard is your guide on this magical and surprisingly immersive journey. As you’d expect, ‘yer man’ has serious magic powers and he’s not afraid to use it, to fill your pockets with gold!

Sat on the mossy forest floor, our five reels are framed by a couple of golden wizard staffs and hats. Reel symbols are split into lower and higher value sets. 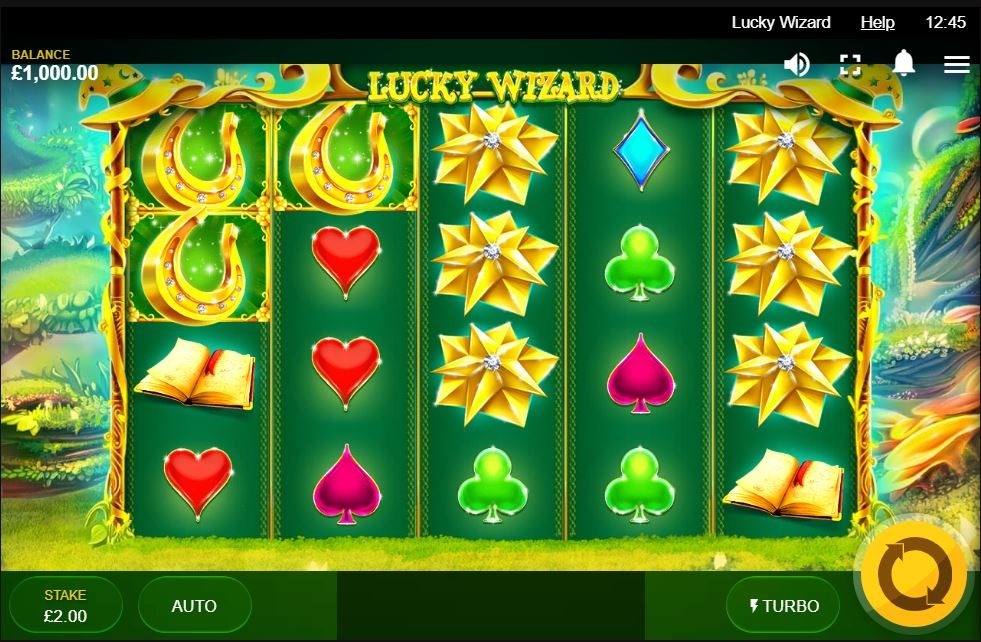 Wilds play an important role in the Lucky Wizard online slot, so they get the one Celtic icon to rule them all… the four-leaf clover!

If you like your music on when you play UK online casino games, you’ll be having a folksy old time with the some jig-inducing Irish tunes.

And of course, when you play your way to a nice win, you’ll see Red Tiger’s familiar ‘Big Win’ screen. Let it play out and enjoy the excitement or click-to-reveal and play straight on? We don’t judge. 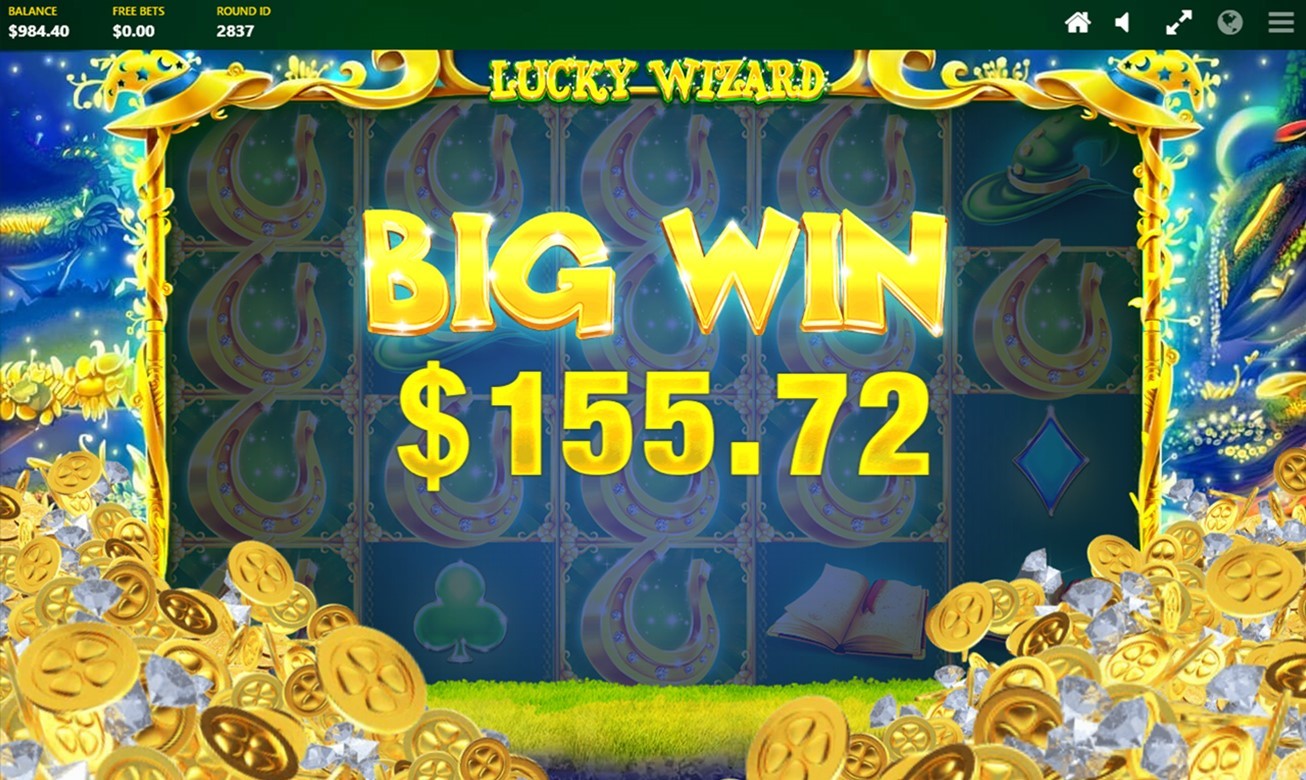 The Lucky Wizard RTP comes in around 96% and with both frequent wins and rare yet sizeable hauls up for grabs, there’s something for every slots fan. With deep stacked Wilds paying up to 800 coins and an 800x multiplier in the Lucky Bonus feature game, you’re playing for some serious coin!

Don’t forget, you’re earning 0.4% on EVERY SPIN with PlayOJO’s OJOplus money back! Check the menu on the left-hand side for a live update on your ever-increasing OJOplus balance, then hit COLLECT when you’re ready to give your balance a boost. All in cash obvs, for you to do whatever you like with.

There are six features in the Lucky Wizard video slot. Two Special Features are triggered by reel symbols, starting with our absolute fave, the Lucky Bonus.

Hit three Lucky Bonus symbols and you’ll embark on a quest which ends in a multiplier between 3x and 800x every time!

Once you’re inside the mini game, you join the Wizard at the beginning of his quest. The path ahead is scattered with meaty multipliers whose value rises each step of the way and ends at 800x.

Choose a bottle of potion to reveal the number of steps the Wizard will take. Often you’ll get a ‘+1’ as well, which gives you another bottle pick. If you’re lucky, you’ll get a whole string of +1’s and advance far up the path towards a mega win.

The other bonus reel symbol is the Lucky Win. When it lands on the middle reel, you’ll get an instant cash win. First the symbol turns into a fat gold pot, the watch as it rains gold coins to turbocharge your payout. 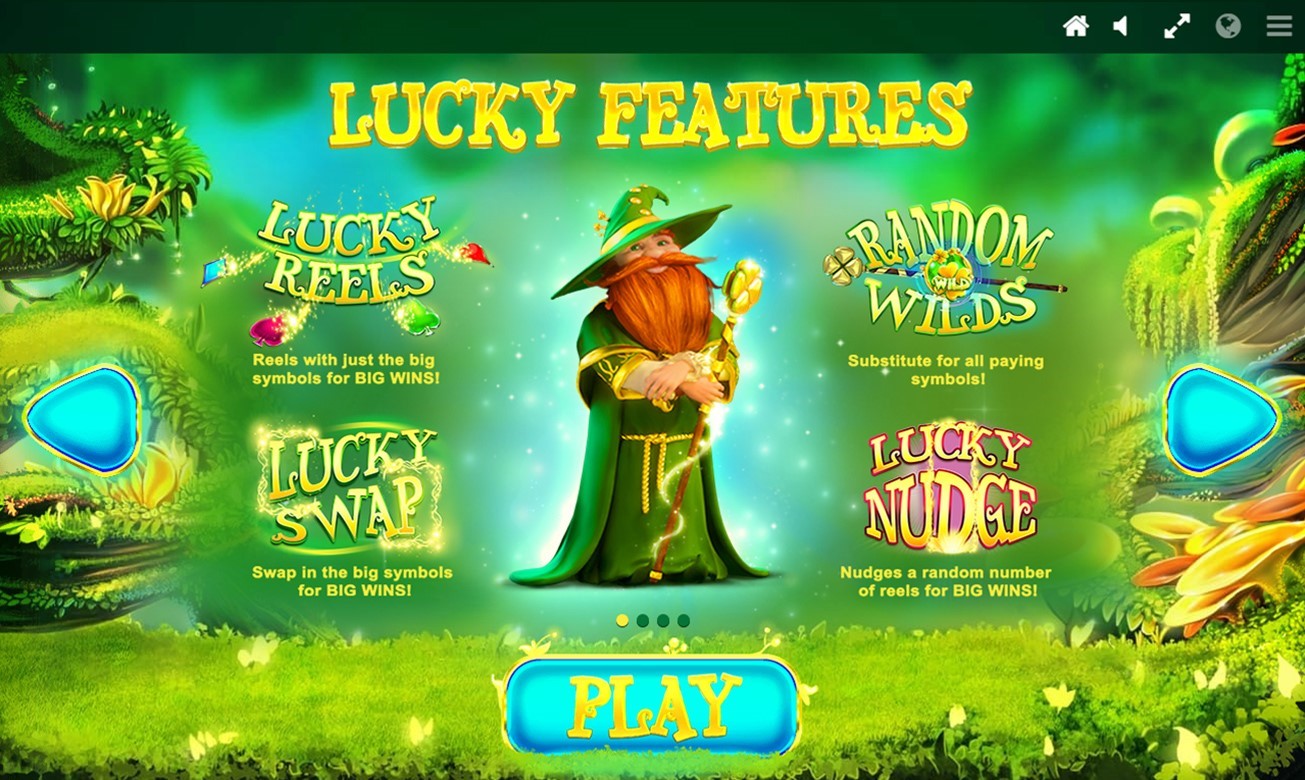 Sometimes the Lucky Wizard himself appears to conjure up one of the four Lucky Features. When you’re in with a chance of meeting him, the reels will spin faster than usual. They’ll turn midnight blue and emit starbursts of magic. Sometimes it’s a false alarm and he’s a no-show. Other times, our man appears, gives a nod and spreads his cloak to reveal one of these tasty treats:

There are loads of luck-of-the-Irish online slots and OJO’s seen them all, so it takes a lot for him to get excited. But like other games from Red Tiger, the Lucky Wizard video slot is slick, quick… and the features make it tick!

Now go get some comfy sandals for that Lucky Bonus quest. It’s Playtime!

Want another magical slot with incredible features? Play Wish Upon A Jackpot. If you’re into your Celtic mysticism and mega multipliers, give Rainbow Riches a try!