Book of Dead slot is best Rich Wilde game yet

If you don’t try PlayOJO’s Book of Dead slot before you’re in a sarcophagus, you won’t have lived!

Deep within the tombs of the pyramids of Ancient Egypt, intrepid adventurer Rich Wilde battles underworld gods Anubis and Osiris for control of the Book of Dead. That’s the backstory behind one of the 2010 decade’s most popular video slots, released by Swedish games studio Play'n GO in 2016.

You may recognise our hero by now, as this game is the latest in the Rich Wilde series of slots that includes Aztec Idols and Pearls of India. Both of which you can play here at PlayOJO!

It’s one of the best mobile slots we’ve ever seen (check out the screenshot below, or just give it a go for real money or for free). Book of Dead has scintillating graphics, sounds and animations, not to mention a phenomenal Free Spins feature which helped it become reportedly the most popular Egyptian online slot in recent history. We’ll reveal the mysteries of this game shortly but there’s 1 thing you should before you set out on your quest.

Make your 1st deposit with PlayOJO to play casino games online and you’ll get 1 Free Spin for every $1 you deposit (min $10) up to a maximum of 50 Free Spins (valued at $0.10 each). There aren’t any wagering requirements, coz that’s how we roll. But there is a reward policy you should check out. 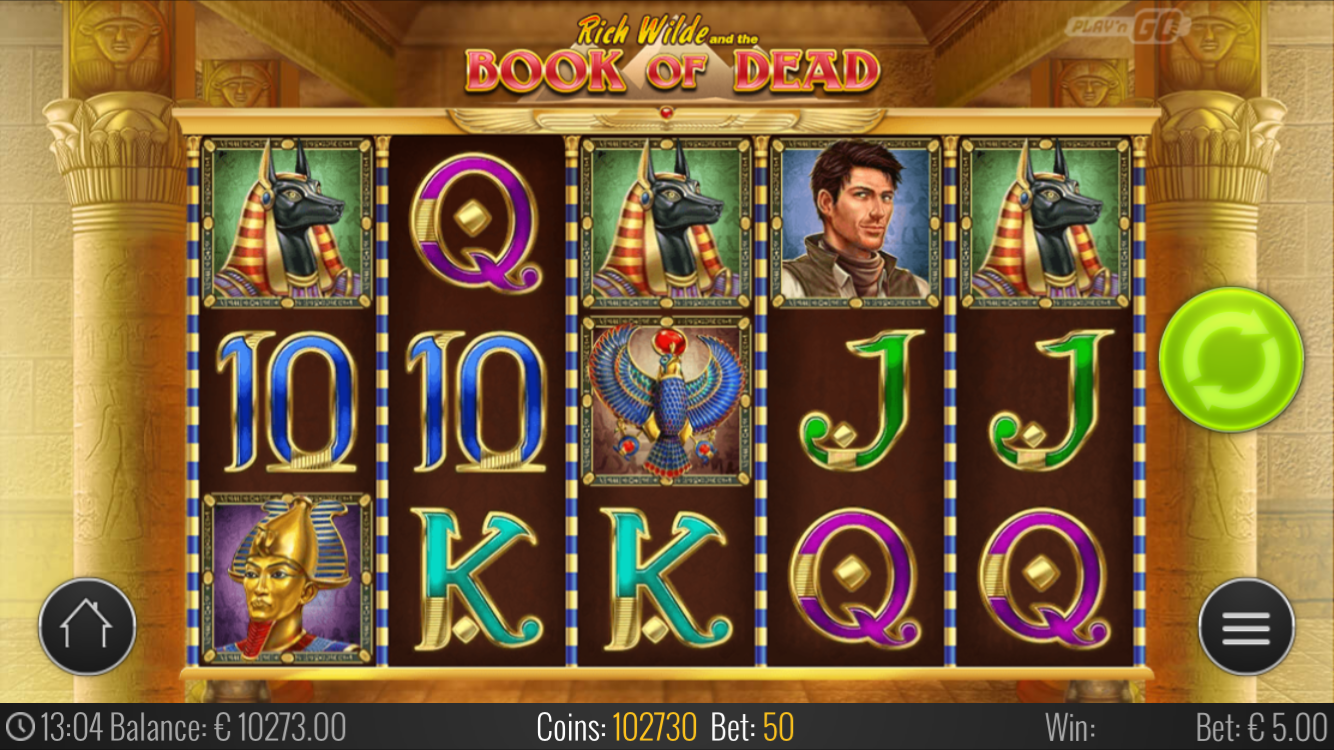 The first thing you notice are drop-dead looks that would put Nefertiti to shame. With their clever little animations, even the paytable and info pages are a knockout!

As themes go, ancient Egypt has it all; the mystery, the treasures and the rich pagan mythology. If you can’t tell your Thutmose from your Tutankhamun then we’re talking The Mummy movie franchise here. Or Richard O’Brien-era Crystal Maze.

The reels are set within the spotlessly clean, carved walls of an Egyptian pharaoh’s tomb. Not a cobweb or booby trap in sight. This adventure’s gonna be easy!

Our hero (or is he just an unscrupulous tomb raider?) Rich Wilde is what Indiana Jones probably looked like before the Nazis, the Ark and the whisky habit. Wilde feels like he should have his own comic, something supported by the stylised font of his ‘Rich Wilde and the’ prefix to the game’s title. So he looks the part, but is he up to taking on Osiris, the god of life, death and the afterlife? Big ask! 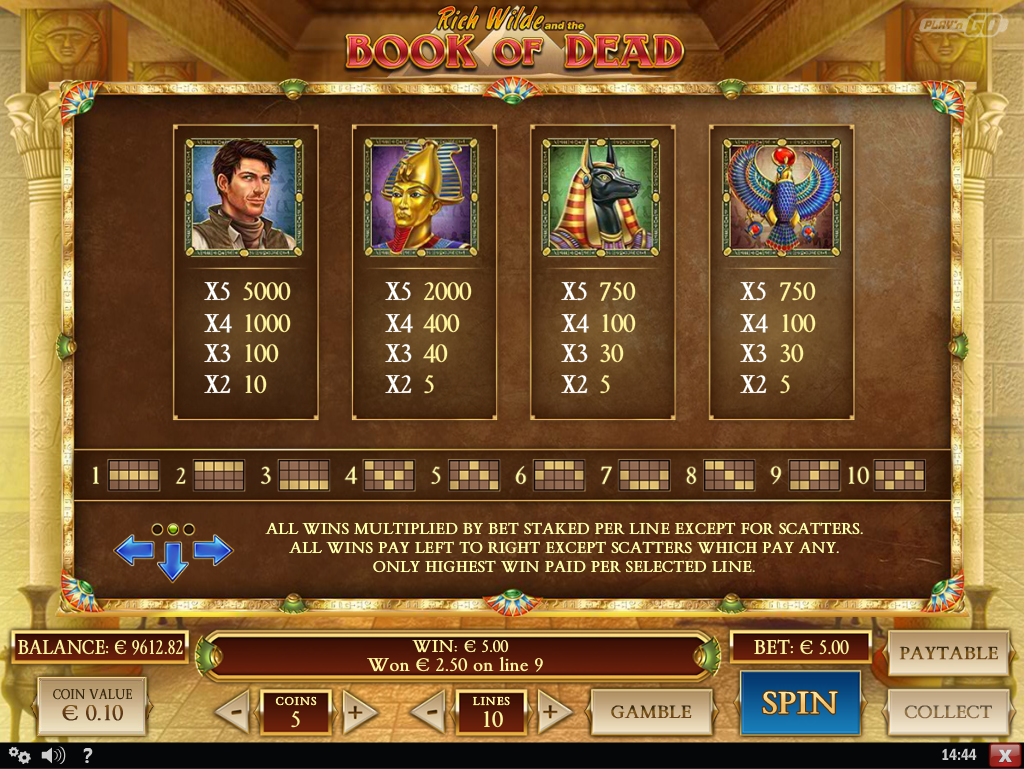 As usual we have Ace through 10 for the lower value wins, represented by ornate Arabic lettering fit for a pharaoh. This slot awards small wins and huge wins and not much in between, so you’ll be zeroing in on the higher value symbols. The good news is that unlike the Ace symbol and below, which you need at least 3 of to cash in, you only need 2 of these:

One other symbol you’ll be on the lookout for is the Book of Dead. This gold book adorned with a winged beetle is both the Wild and scatter symbol which triggers Free Spins. More on that down below. 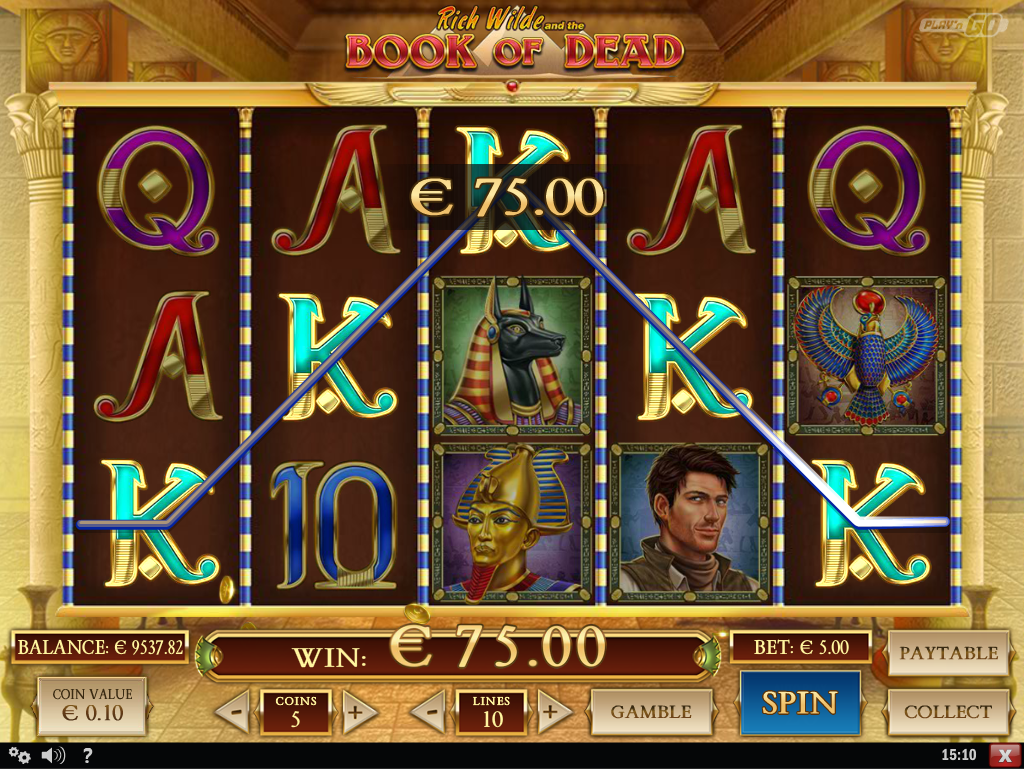 Some game studios shy away from the big beats. Not Play’n GO. Dramatic drum beats and the sounds of ancients Ouds and lyres create the mysterious aura of a subterranean tomb adventure.

Hit a win and the tension mounts with a hypnotic, exotic tribal track that tells you the Gamble feature is open for business. Inside, yet more drums and twanging of lyres. Back to the base game and it almost seems to go up one more notch!

Pretty standard fayre here as Book of Dead is a 5-reel video slot machine with up to 10 paylines. You can bet up to 5 coins per line and with a range of $0.10 to $1 per coin, that’s high grade entertainment for between $0.10 and $50 a spin.

Book of Dead has a Free Spins feature, a must-have for most slotsfans, and it makes for a wild ride with infrequent but epic wins that are worth the wait.

The Rich Wilde symbol is worth up to 5000 coins and if your Free Spin special symbols fall the right way, you could raid this tomb for a 250,000 coins maximum win. Cha-ching!

The Book of Dead slots RTP is 96.21%, a respectable number if we ever saw one! That of course doesn’t include the money back OJO gives you every time you play through his OJOplus reward programme. Want to know more? Course you do amigo.

How to play Book Of Dead slot?

Wins from the Book of Dead slot base game won’t make you a pharaoh fast (we’ve got casino jackpot games for that). But it’s the less frequent but Hieroglyphically Humongous® payouts you can hit with Wilds and Free Spins in the Book Of Dead bonus features that make this game truly tomb-shattering.

The golden Book is a Wild symbol which as usual substitutes for any other reel symbol to create some tasty combos. But it’s also a scatter symbol which can trigger monumental Free Spin wins… 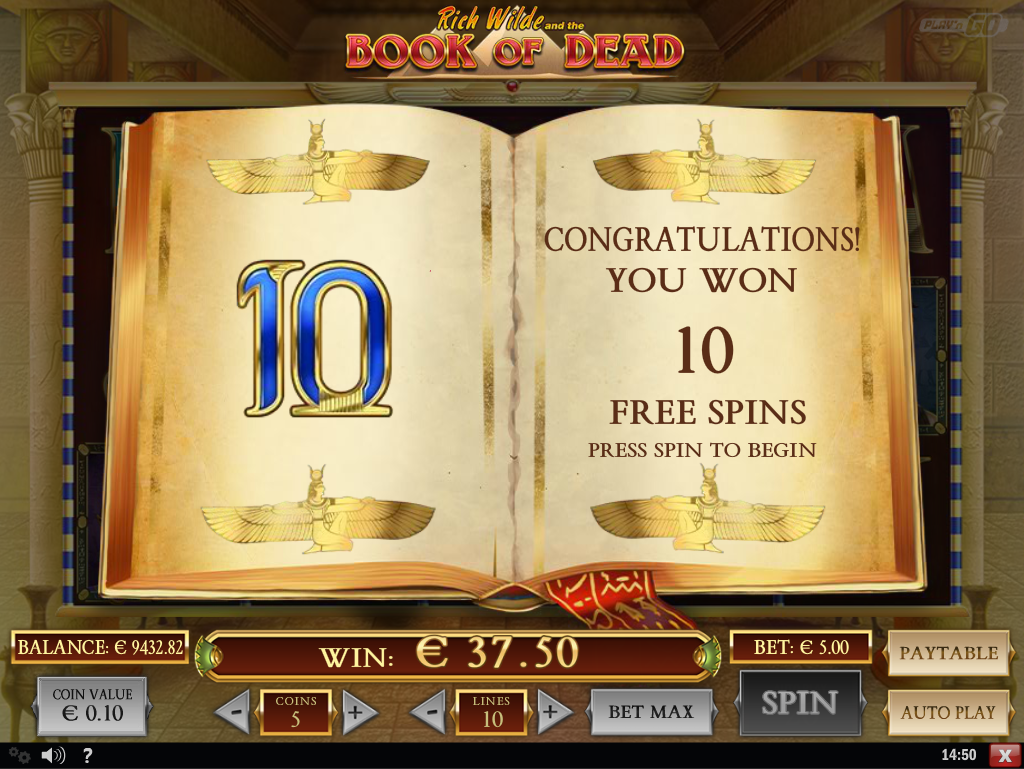 Free Spins are categorically the most popular slots feature with online casinos UK players, and Mr Wilde has brought some to the party. When 3 or more Book symbols land in any position on the reels, you’ll get a payline win plus it’ll trigger 10 Free Spins. If you hit 3 or more Books again during any Free Spin, another 10 are retriggered - Holy Hatshepsut!

As you can see from the picture above, before the Free Spins start the book will reveal to you a random reel symbol it has chosen as a special expanding symbol. That symbol can expand across reels to complete much bigger wins, and will always be framed in gold as in the screenshot below. This potential for reel-fulls of special symbols, plus an almost endless possible sequence of Free Spins, is how you emerge from the ancient underworld, dusty but victorious, with up to $250,000! 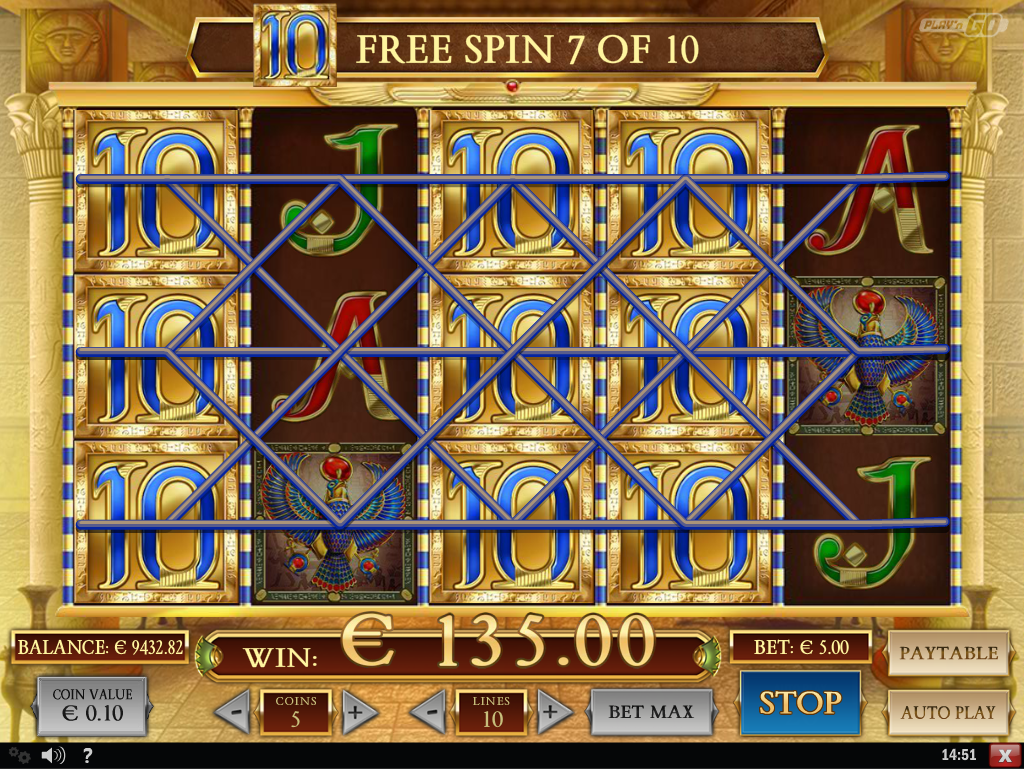 After each winning spin you’re offered an optional Gamble feature where you can 2x or 4x your win. To double your money, take the coin-flip scenario of black or red. To quadruple your cash, choose 1 from the 4 suits of cards. You’ll see the history of recent cards below, not that it affects any future turn of course. And if you win, you can go again and again until you’re ready to head back to the tomb. 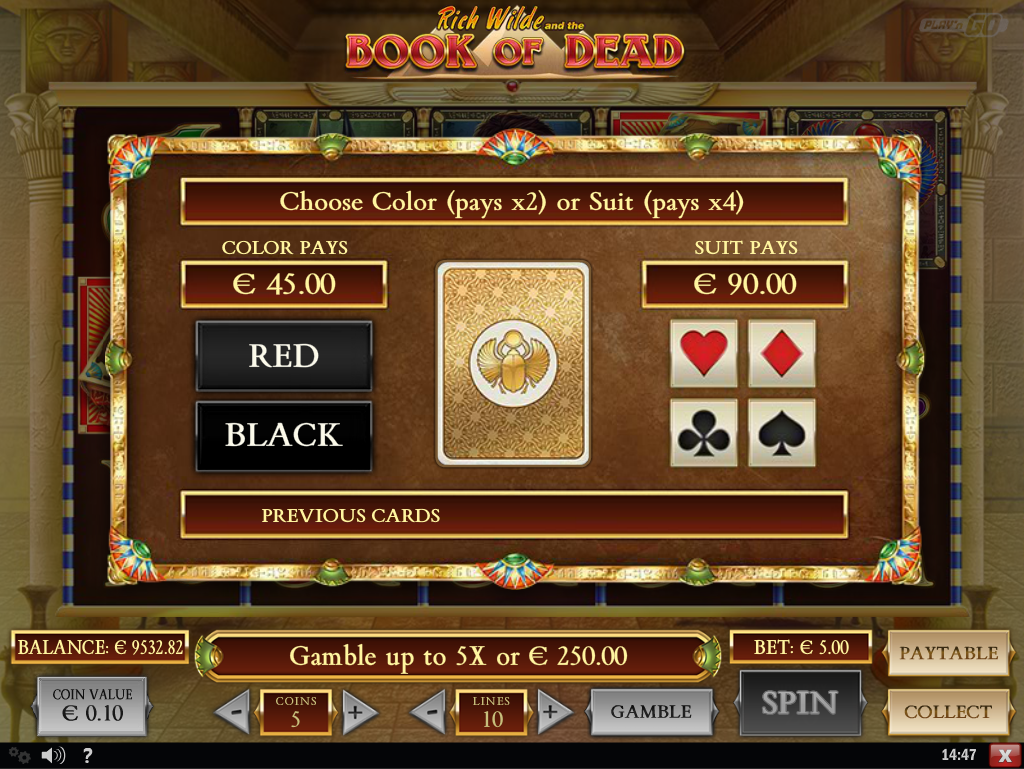 So immersive you feel like you’re there! This slot perfectly taps into the mystique of ancient Egyptian adventures that has spawned so many myths and movies. It’s proof that online casino games can be every bit as high quality as video games.

… Aztec Idols! Rich Wilde heads to South America where wins of up to $75,000 can be unearthed. Check out the amazing Free Spins wheel and picker Bonus game on our Games section. Montezum-ing marvellous!