This one is a reimaging of one of the studio’s classic titles. However, as the name suggests, the Twin Spin Megaways slot features the popular Megaways reel dynamic. Combined with cascading reels, Free Spins, and even Multiplier Wilds, the title certainly is packed with action! 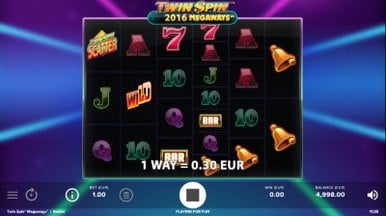 There’s a lot to get you lot excited on the Twin Spin Megaways online slot. However, if you’re still not impressed enough to join us here at PlayOJO, we have some other news that might tempt you. OJO’s offering all his newest pals 50 Free Spins with absolutely no wagering requirement. Not bad at all!

In terms of looks, Twin Spin Megaways online slot is pretty basic. There aren’t the kind of flashy animations or epic artwork you’ll see on many titles these days. However, for some players all that extra stuff is just a distraction anyway! 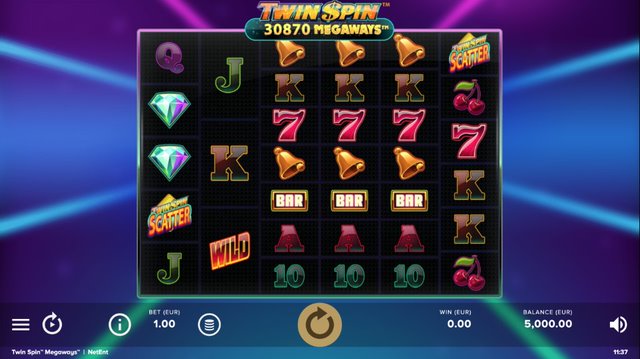 The Twin Spin Megaways slot game has a fairly nondescript background. Meanwhile, the symbols themselves are those synonymous with casino gambling. As well as the face card symbols seen on many online casino games, you’ll also find BARs, diamonds, liberty bells, cherries, and related symbols. It’s pretty similar to what you might find in your local boozer to be honest!

The Megaways reel dynamic has a constantly shifting number of ways to win. The reel height can range between two and seven symbols and they change on every spin. This can create a maximum of 117,649 ways to win!

Evolution says the absolute top prize on this feature-full slot is 38,000x the total bet. The title awards pay-outs for matching three or more consecutive symbols in any position along the six reels. Meanwhile, the Twin Spin Megaways slot RTP rating is 96.04%.

The title also has an Auto Play feature. If you’re going to use it, make sure to do so with caution. Always play responsibly!

Twin Spin Megaways isn’t just a clever name! The title not only uses Megaways reels but also comes with a Twin Reel feature. On every spin, the game selects two or more reels at random to display identical symbols. Also, during the Free Spins feature, the matching reels always display seven symbols, allowing for the maximum ways to win on the selected reels.

Along with its Megaways reel dynamic and Twin Spin feature, there are a few other additions to the game that provide plenty of thrills. The title’s Avalanche feature following any win sees new symbols cascade onto the reels, potentially allowing for additional pay-outs.

Like many of the great online slots in the UK, there’s also the Twin Spin Megaways Free Spins mode. Trigger it and you’ll get 12 chances to win that won’t cost you penny. During the feature, the game’s Wild Symbols can have a 2x or 3x multiplier too!

Bets range from just 10p right up to £200 per spin. Just click the stack of chips to the bottom of the reels to select your stake before you start spinning! 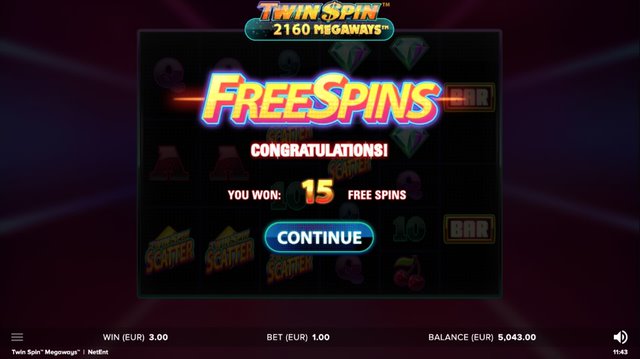 If you’d rather ‘try before you buy’, you can always take a few spins on the Twin Spin Megaways slot demo. That way you can see if the title is right for you before risking your own cash.

While it might not be the most visually impressive game we offer here at PlayOJO, the Twin Spin Megaways slot machine still has a lot going for it. Along with the always entertaining Megaways reels, the title’s Twin Reel feature can make for some massive wins. Completing the package is the Free Spins feature with Win Multipliers. Oh, and the soundtrack is seriously funky too!

Rather than take OJO’s word for it, why not see for yourself and play the Twin Spin Megaways slot in the UK here at PlayOJO today.

Syncronite by Yggdrasil. If synced up reels is your idea of special feature heaven, we think you’ll really enjoy this one. Like Twin Spin Megaways, it has a classic casino vibe and offers the chance to win an impressive 64,000x the bet on a single spin!