Hey there, amigos. Today, we’re looking at a devilish online casino game by QuickSpin. The Titan Thunder: Wrath of Hades slot has wicked artwork and sinfully splendid special features to boot. There’s also a fixed jackpot up for grabs. If you’re into action-packed slots online with a mythological theme, this one might be right up your street! 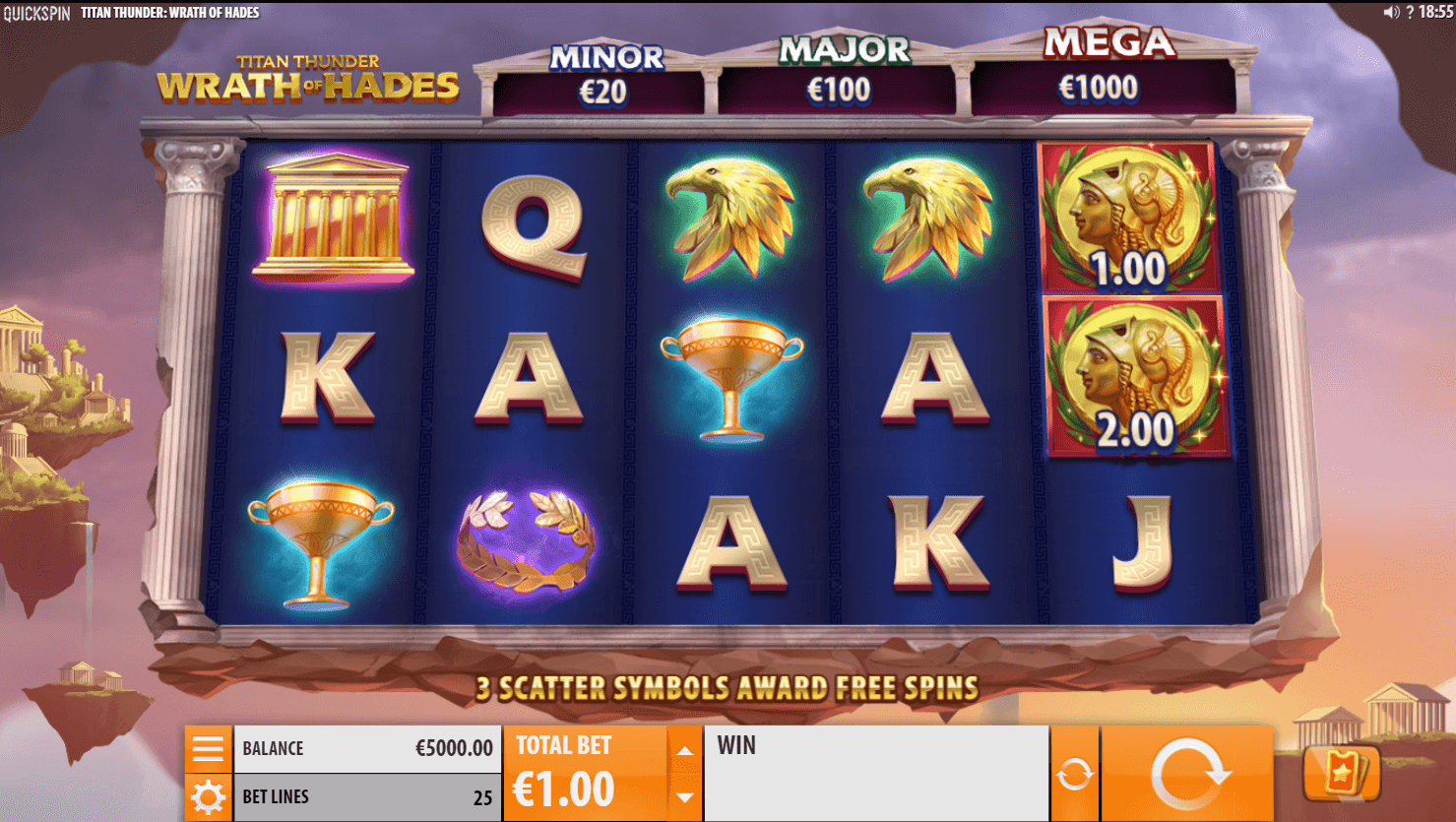 As if trying your luck against the god of the underworld wasn’t gripping enough, OJO’s got some other awesome news for all his newest pals. He’s offering new players making their first every deposit 50 Free Spins with absolutely no wagering requirement… Nice!

The Titan Thunder: Wrath of Hades online slot is a real looker. The Ancient Greek action takes place in two distinct locations. The first is above the clouds amongst the heavenly Elysian Fields. During the Free Spins feature, we’re taken deep to the heart of the underworld to test our luck against hades himself!

The symbols on the Titan Thunder: Wrath of Hades slot are represented by imagery typical of Greek mythology. The higher value ones take the form of the Parthenon, a majestic eagle’s head, chalice, feathered crown. The godly overlord Zeus also takes centre stage as the game’s Wild Symbol too. 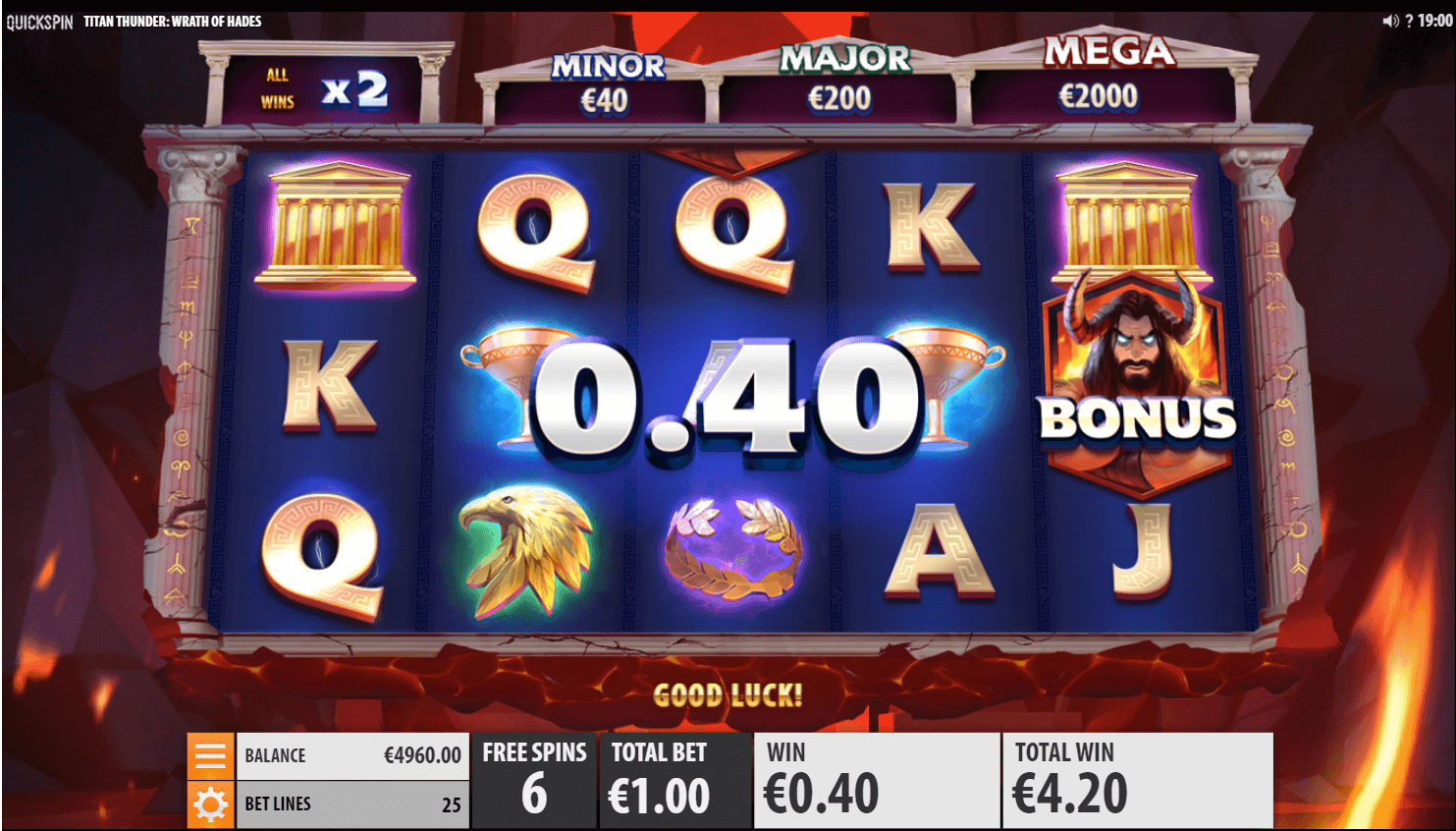 The action unfolds across a reel set fairly typical of other online casino games in the UK and beyond. Five reels of symbols and three rows create a total of 25 fixed pay lines

The title also has an Auto Play function to really speed the gameplay up. Whilst it’ll certainly allow you to get through more spins per minute, it’s important to use it with caution. Always make sure you play responsibly!

The main draw of the Titan Thunder: Wrath of Hades slot game is certainly its jackpot feature. After you trigger it with six money symbols, all other symbols vanish.

Subsequent spins will hopefully add more prizes. If no more prize symbols appear for three consecutive spins, the feature concludes. You’ll then either win the value of all cash prizes on display, or one of the fixed jackpot amounts if you manage to land its symbol. Finally, filling the entire screen with prize symbols awards the game’s Mega Jackpot of 1,000x the bet!

You’ll activate the Titan Thunder: Wrath of Hades Free Spins mode when you land three or more Hades Scatter symbols anywhere on the reels. The feature begins with eight free spins but landing another three Scatters triggers eight more. Retriggering the feature also increases the current multiplier for all spins to make for potentially heroic wins! 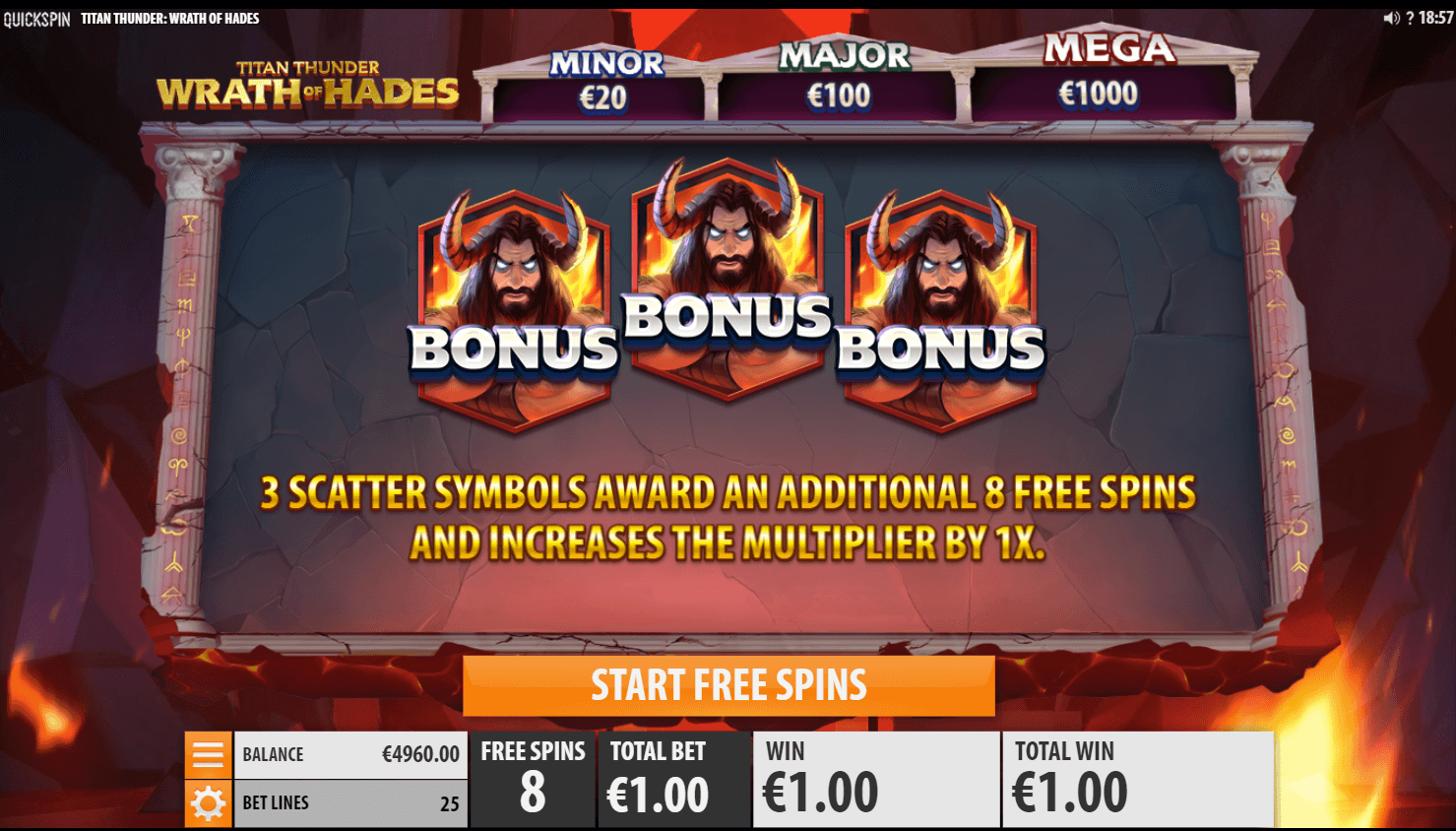 It’s worth noting that you can actually buy your way into the Free Spins feature too. It’ll cost you a total of 40x the total bet.

Bets range between 25p and £100 per spin on Quickspin’s Titan Thunder: Wrath of Hades slot. Use the up and down arrows below the reels to toggle the various stakes. 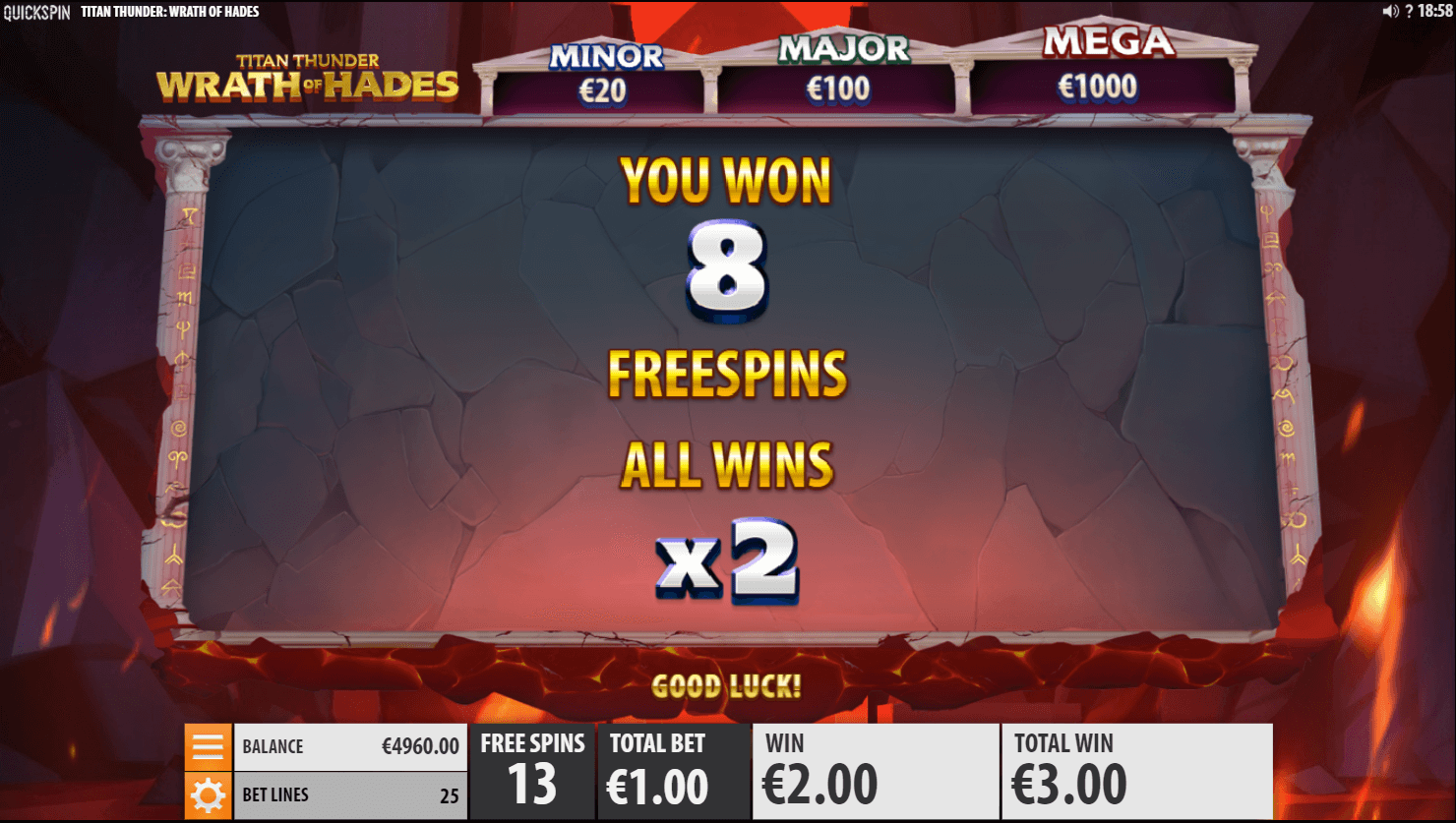 If embarking on this underworld adventure for real right away is a little daunting, never fear! Here at PlayOJO, we host free to play versions of loads of our games. Just load up the Titan Thunder: Wrath of Hades slot demo to test the action for free first!

The Titan Thunder: Wrath of Hades slot machine is an action-packed Ancient Greek adventure. With a potentially massive jackpot up for grabs and a progressively rewarding Free Spins features, this dance with the devil himself might be the perfect title for you.

Don’t just take OJO’s word for it though, you can see for yourself and play the Titan Thunder: Wrath of Hades online slot in the UK here at PlayOJO today.

Quickspin’s Hammer of Vulcan. From Ancient Greece to Ancient Rome we’re sticking with not only Quickspin but the theme of the underworld too. We particularly liked the Light the Forge! bonus that culminates with a guaranteed win thanks to the Strike Again! feature. The rocking heavy metal soundtrack also makes the title ideal for OJO’s headbanging pals!