Howdy, amigos! Today, we’re looking at another one of Play’n Go’s Asian-themed jackpot slots. This time it’s Temple of Wealth. It shares its progressive top prize with two other titles in the “Wealth” series – Celebration of Wealth and Beast of Wealth. With real lifechanging money up for grabs, this one is a saintly slot with some pretty pious prizes!

If the chance to take home a massive progressive jackpot isn’t thrilling enough, OJO has some more news that might get your pulse racing. He’s offering all his newest members that make their first deposit 50 Free Spins with no wagering!

Temple of Wealth: How it Looks

There’s nothing too out there with how the Temple of Wealth slot game looks. It follows the typical Asian slot theme. If you play slots online a lot, you’ll know the score. Symbols include an Emperor, a Prince, a Koi, a sycee, and coins. Meanwhile, the Temple Door Symbol is Wild and the Yin Yang Symbol is the title’s Scatter.

The action on Play’n Go’s Temple of Wealth takes place over a reel set measuring five symbols by three. This creates a total of 243 ways to win, with winning combinations being formed when matching symbols land on consecutive reels. 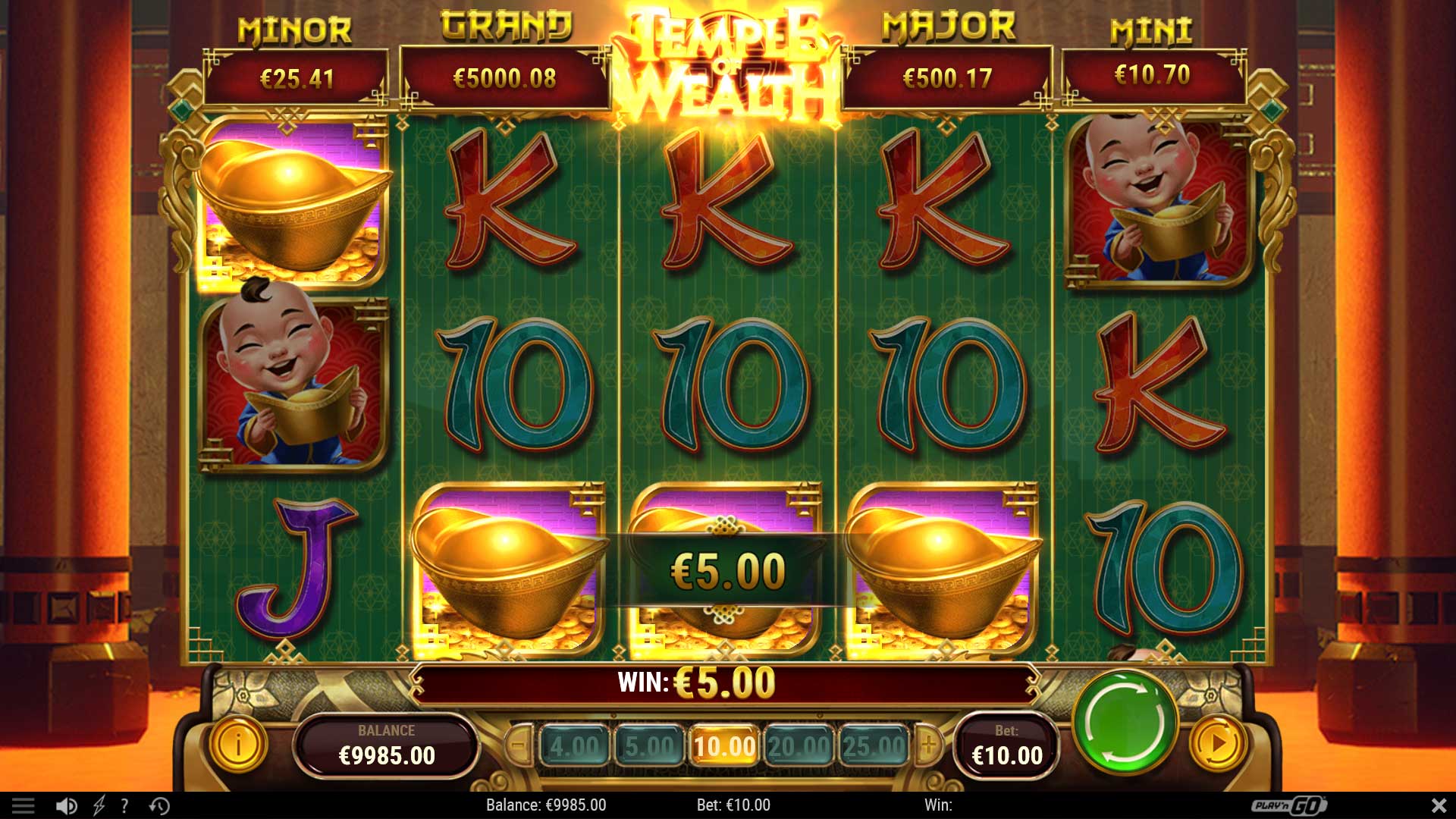 Play’n Go says the Temple of Wealth slot RTP rating is 96.2%. Whilst the game’s top prize is obviously the progressive jackpot, the main game jackpot of 5,000x your total bet is pretty hefty too!

The game also features both an Auto Play and Turbo Spin function. You can use these to speed up the action but be careful. Since it’s easier to lose track of your spending with them active, remember to play responsibly!

Just like on Beast of Wealth and Celebration of Wealth, one or more reels suddenly turning gold triggers the jackpot side-game. Here, you’re guaranteed to take down one of the game’s jackpots.

You have to pick boxes to reveal the different prizes. Whichever you match three of first will be the one you receive. So, say your prayers and hope for three Grand Jackpots! That said, the smaller prizes can get pretty tasty too!

The jackpot aside, the Temple of Wealth slot machine has a neat Free Spins feature. You get to choose how many spins and how many Mystery Symbols are on the reels. Cautious players can opt for more spins with fewer added symbols. Those who like to gamble, can load the reels with Mystery Symbols and take a smaller number of spins. 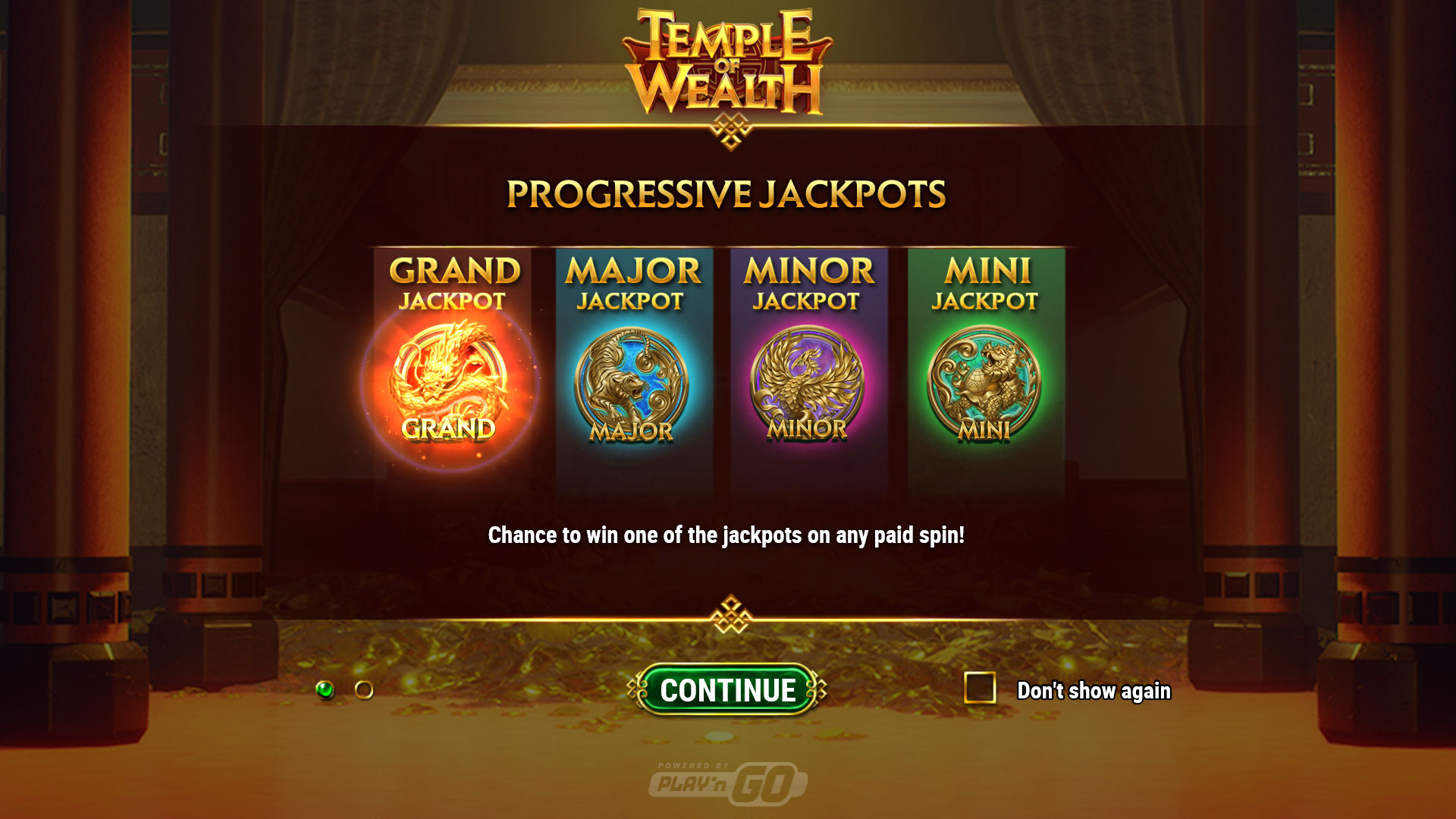 Represented by a traditional golden dragon, the Mystery Symbol only appears during the Temple of Wealth Free Spins mode. It sticks to the reels and spreads vertically. Behind each of the Mystery Symbols is the same Paying Symbol. Guaranteed matching symbols on the reels can make for some great pay-outs!

Bets on the Temple of Wealth online slot range between £1 and £100. To adjust your stake, just use either the Plus or Minus at the bottom of the reels. 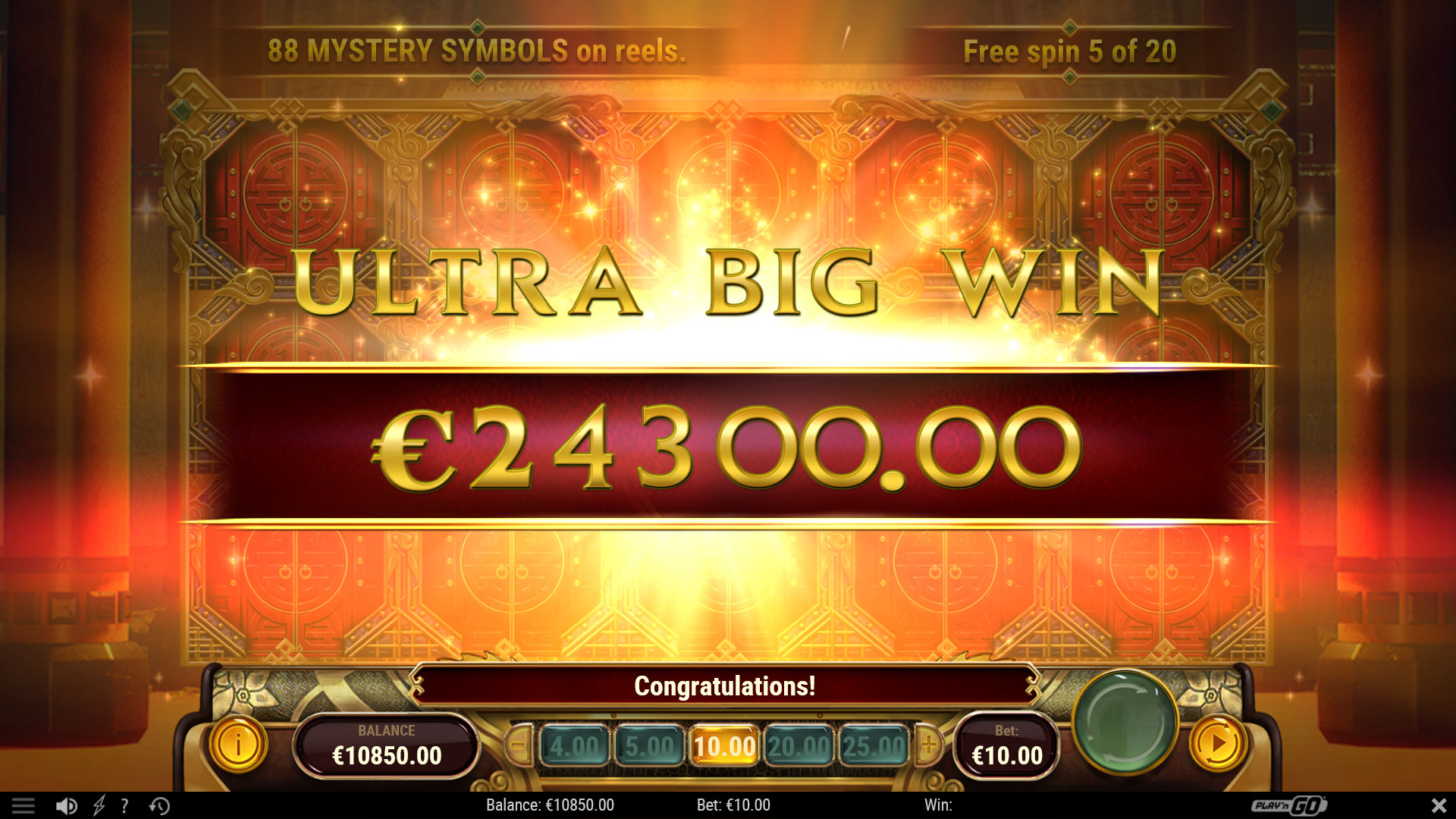 OJO knows that some of you lot like to try out new online casino games before you risk your own money on them. That’s why we host free-to-play versions of many of our titles. Just load up the Temple of Wealth slot demo to check the action out before staking funds for real.

Thanks to its potentially huge jackpot prize, as well as a respectable main game maximum pay-out, the Temple of Wealth slot game can be a really lucrative punt. That’s not all OJO loved about the title though. Its choose-your-own Free Spins feature provides a lot of replay value, making it a strong take on a classic slot theme.

Don’t just take our word for it though. See for yourself when you play the Temple of Wealth slot in the UK at PlayOJO today.

Beast of Wealth by Play’n Go. Part of the same trio of games as Temple of Wealth, the gameplay is very similar. There’s still a potentially massive progressive jackpot up for grabs but Beast of Wealth features a slightly different theme and its own unique Free Spins feature.