Hey there, OJOers. Today, we cast an eye over another one of SG Digital’s Spartacus series of online slots. Spartacus Megaways slot is available here at PlayOJO and we’re more than ready for another historical fight to the death!

The chance to take part in gladiatorial battle is well worth a visit to PlayOJO. However, if you needed something to further sweeten the deal, OJO has another treat for his newest pals. Anyone signing up and making a deposit with us will get 50 Free Spins with no wagering!

Although the Spartacus Megaways online slot’s artwork isn’t radically different from others in the SG Digital Spartacus series, there is one detail that immediately jumps out. A curtain obscures part of the reels, blocking out some symbols. The curtain changes shape between spins, adding even more variance to the number of ways to win.

Symbols on the Spartacus Megaways slot game take the form of warriors themselves, their weapons, and the poor beasts that the gladiators do battle with. Meanwhile, as is common on online casino games, the lowest value symbols are represented by high value playing cards.

SG Digital’s Spartacus Megaways slot game has six of its variable-depth reels and a seventh horizontal reel at the bottom. This Megaways dynamic is a firm favourite with OJO.

The varying reel depths make for an everchanging gameplay experience. Ten possible rows on reels one and six, and nine on the other four reels can potentially mean a heroic one million ways to win! 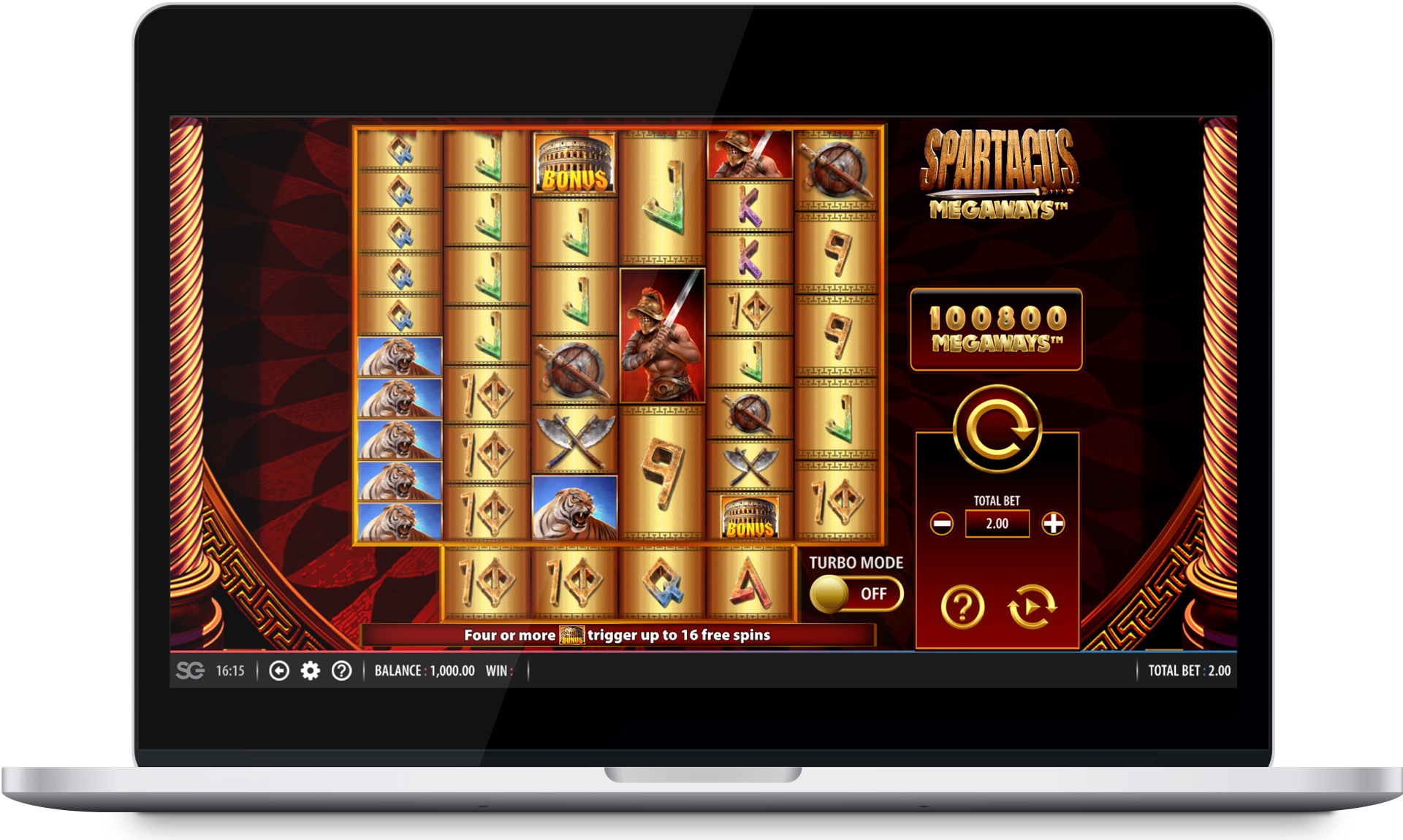 Hitting pay-outs cuts the curtain and winning symbols explode, prompting a symbol cascade. Those that play online casino games regularly will be familiar with the dynamic. Keep slashing away at the curtain and maybe you’ll reveal the maximum number of winning combinations!

The title can award a colossal maximum win of 12,500x the total bet. SG Digital says it’s a high volatility game and that the Spartacus Megaways slot RTP rating is 96.32%.

There’s also an Auto Play function on the Spartacus Megaways online slot. Use it with caution though. Although it’ll speed the action up, it makes it easy to lose track of your bets. Always play responsibly!

Landing four Amphitheatre Symbols anywhere on the reels will trigger the Spartacus Megaways Free Spins. The first task is to spin the wheels to see how many Free Spins you’ll receive, as well as the curtain configuration during them. There’s a maximum of 16 Free Spins up for grabs! 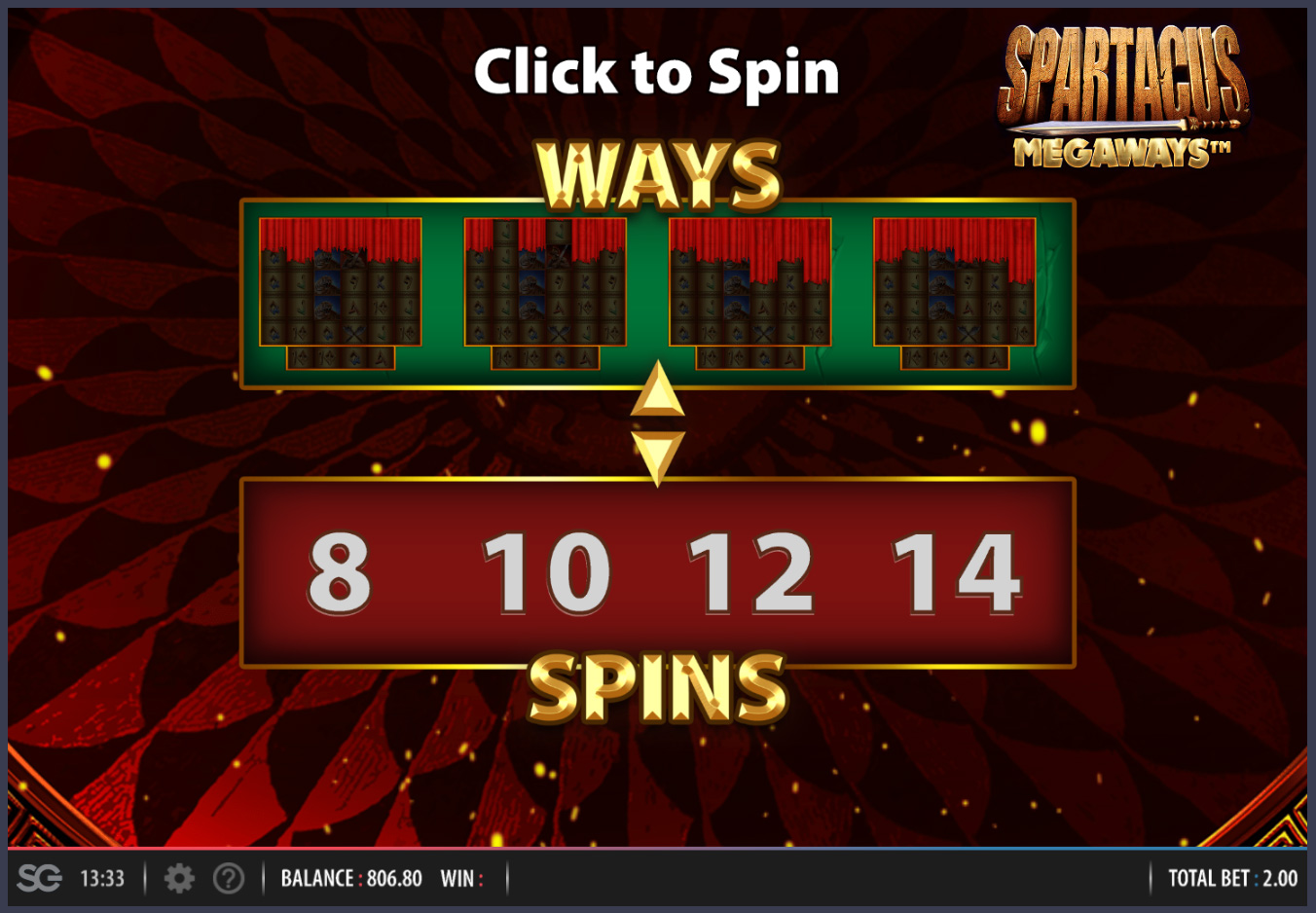 The curtain does not adjust during the feature but you can slash away at it by forming winning combinations! You can also retrigger the feature by landing an additional three or more Amphitheatre Symbols.

Finally, there’s also a win multiplier that’s active during the Spartacus Megaways Free Spins. It builds with each win cascade to make for potentially epic prizes!

You can adjust your stake on the Spartacus Megaways slot machine using either the Plus or Minus to the right of the reels. There are various total bet amounts available. They range from 20p to £20. 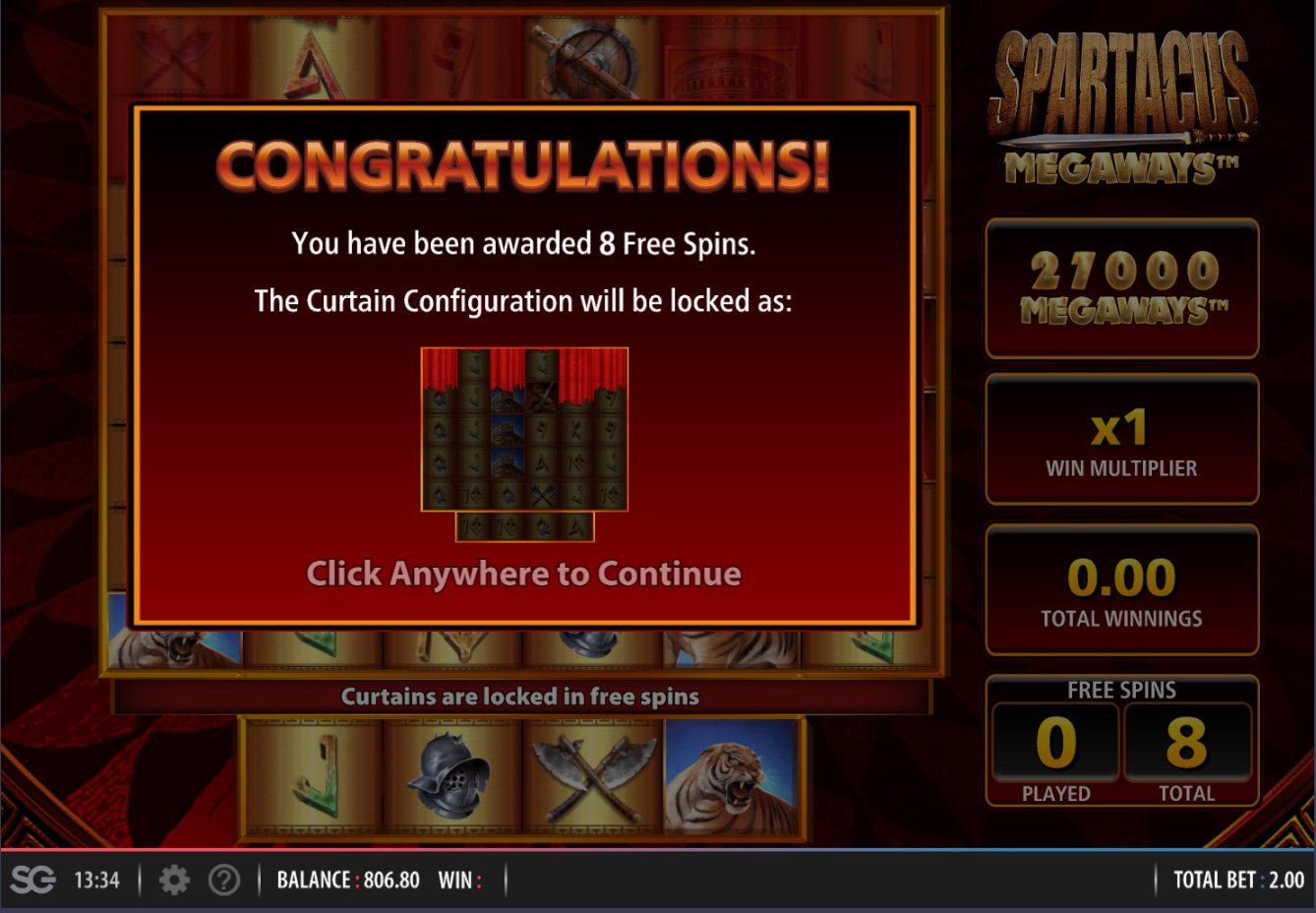 OJO knows that the thought of taking on tigers and other combatants in front of a blood thirsty colosseum crowd for real will be daunting for some. That’s why we offer a Spartacus Megaways slot demo. You can try out the action for free before committing your own money.

SG Digital really got creative with the reels on the Spartacus Megaways slot. Thanks to the Megaways dynamic and the everchanging curtain that obscures some of the ways to win, the game feels constantly fresh. The addition of cascading reels and Free Spins is always welcome too.

Don’t just take our word for it though. You can see for yourself when you play the Spartacus Megaways slot in the UK at PlayOJO!

Game of Gladiators by Play ‘n Go. As the name suggests, this one’s also about historical warriors. With its five random special features that prompt various attacks, there’s a lot of variety on the title. OJO also loved the Enter the Arena Free Spins feature – complete with its own win multiplier!