Hey there, OJOers. Today, we present to you a slot machine that’s equal parts godly and regal. Play’n Go’s Rise of Athena slot stars the daughter of Zeus – the almighty king of the Ancient Greek gods. It’s also loaded with generous bonus features, including up to a 27x win multiplier! This all-powerful title is available at PlayOJO and we know it’s going to make a grand impression on you lot! 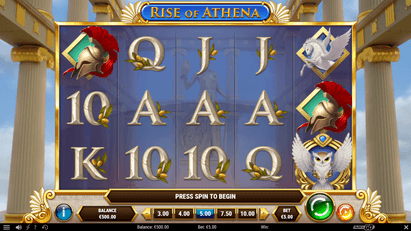 If this action-packed homage to Athena doesn’t tempt you to join us here at PlayOJO, we’ve got some other news that just might. All new players making their first deposit with us will get 50 Free Spins with absolutely no wagering requirement!

Rise of Athena Slot: How it Looks

The action on the Rise of Athena slot game takes place high in the clouds in an opulent building typical of Ancient Greek architecture. Adorning the reel set are high value symbols that include the Pegasus, scrolls, Athena herself, a war helmet, and a ceremonial urn.

There are also face cards from a standard deck, which, like on many PlayOJO online slots, represent the lower value symbols. Completing the majestic vibe is a regal and strangely catchy soundtrack!

Players must match three or more of a symbol along one of the 10 fixed pay lines to receive payment. The win lines themselves run across five reels and three rows of symbols.

At 5,000x the total bet, the top prize on the Rise of Athena online slot is well worthy of our royal deity. Meanwhile, Play’n Go says the Rise of Athena slot’s RTP rating is 96.2%. The title is also considered a medium volatility one compared with other online casino games. 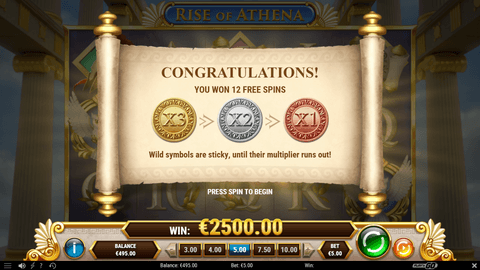 The Rise of Athena online slot also has both an Auto Play and Turbo Spin mode. These can really reduce what little effort spinning the reels requires.

Rise of Athena Slot: Features Fit for a Goddess

Landing three or more of the Owl Scatter symbols in any positions across the reels will trigger the Rise of Athena Free Spins feature. You’ll get 12 opportunities to drop cash prizes without risking any of your own money.

Throughout both the main game and Free Spins, Wild Symbols are both sticky and come with multipliers. When one lands, it will stay stuck to the reels for as many subsequent spins as the multiplier number. For example, a 3x Wild will stay on the reels for three spins. On each spin the multiplier drops by 1x. Combined, Win Multipliers can reach an impressive 27x! 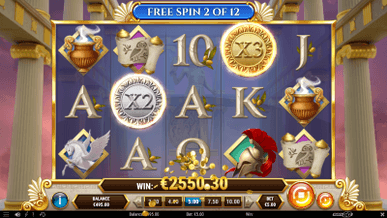 You can bet amounts ranging from 10p to £100 per spin on the Rise of Athena slot machine. You can toggle between the various stakes on offer using the Plus and Minus options to the bottom of the reels. 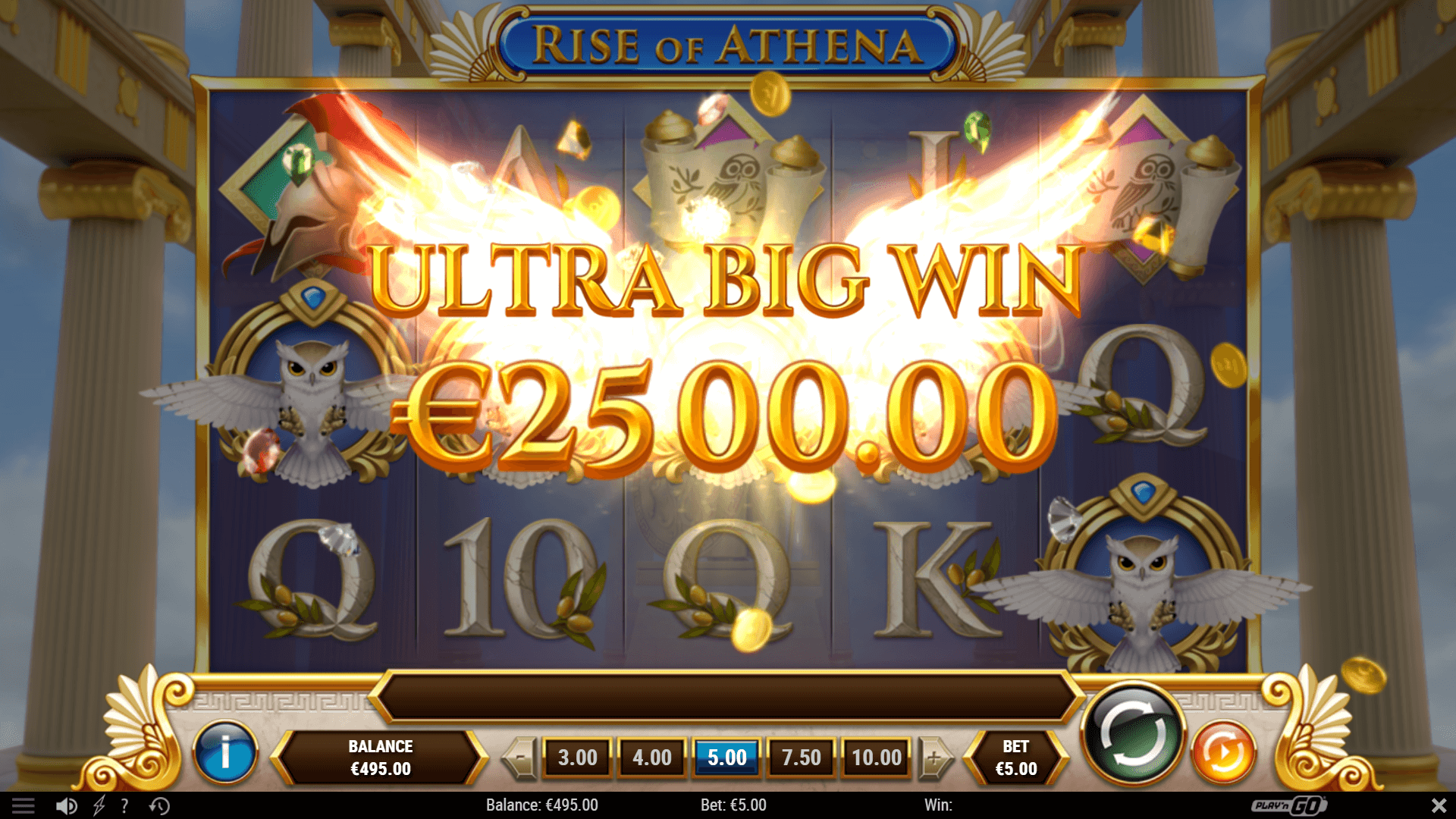 If testing your luck for real against Athena herself is a bit daunting, don’t worry. PlayOJO hosts free to play versions of many of the online slots we offer. Just load up the Rise of Athena slot demo to try it out without risking your own money.

Play’n Go’s Rise of Athena slot game is a pretty godly addition to OJO’s collection – even if he does say so himself. The Free Spins with Sticky Multiplier Wilds can really make for some epic winning combinations. Couple them with the title’s strong art work and a hypnotically addictive soundtrack and you’ve all the makings of a winning casino game.

Don’t just take OJO’s word for it though. Play the Rise of Athena slot in the UK here with us today!

Hoard Poseidon by Red Tiger Gaming. If you’re all about slots based on Ancient Greek deities then we really can’t recommend the Hoard of Poseidon slot enough. Not only is the title incredible to look at but the gameplay is top notch too. Standout features include the huge variety of Wild Symbol combinations that can land – each with their own potentially lucrative special feature!