Rage of the Seas Slot: It’s Time to Walk the Plank!

Ahoy, matey! Batten down the hatches and hoist the Jolly Roger. We’re going in search of booty on NetEnt’s Rage of the Seas slot. It’s made land here at PlayOJO, ye scallywags, and Captain OJO can’t wait for you all to play it. Get your cutlass at the ready or you’ll be walking the plank! 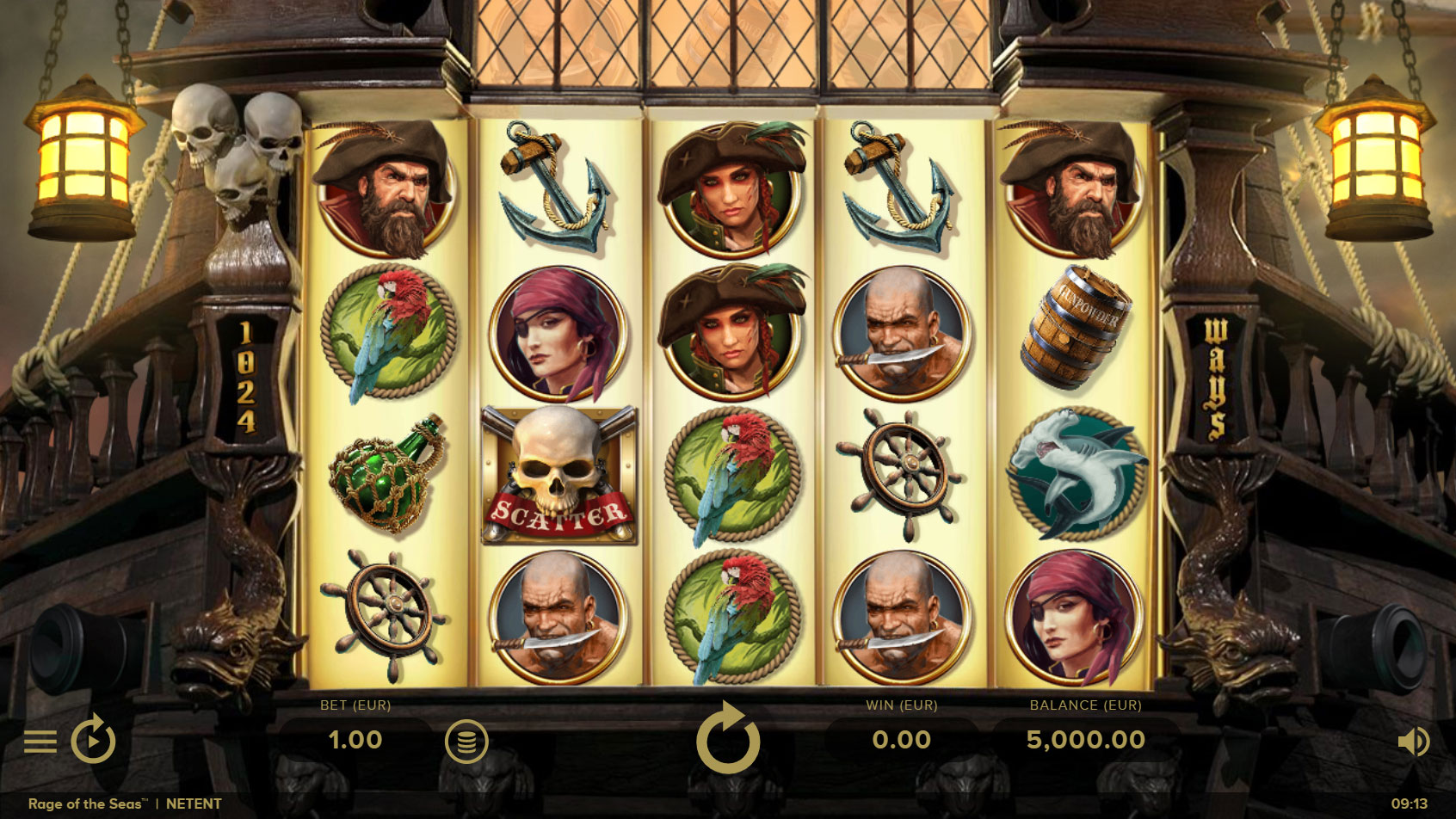 If sailing the open seas in search of treasures isn’t exciting enough, OJO has another treat in store. He’s offering all his newest members 50 Free Spins with no wagering when they make their first deposit. How’s that, me ‘earties!?

Rage of the Seas Slot: Look and Feel

This swashbuckling slot is a real looker. The action takes place aboard a mighty sea vessel. It’s a decadent craft, with skulls and ornate carvings of sea creatures adorning its bows. One of the features also takes us up the rigging towards the crow’s nest but more on that in a moment.

In terms of symbols, the game’s highest paying ones are each represented by the ship’s crew (parrot included) and a fierce-looking hammerhead shark. Meanwhile, the lower value symbols are items typical of a pirate ship – keg of gunpowder, anchor, etc.

The Rage of the Seas slot machine is played over a reel set that’s five symbols by four.

However, landing Boost Symbols will prompt the ship’s mascot, a tiny fez-wearing monkey, to climb the rigging and open up to three extra reels, increasing the number of ways to win.

Without the boosted reels, there are 1,024 potential winning combinations. With them fully open there are 5,488! 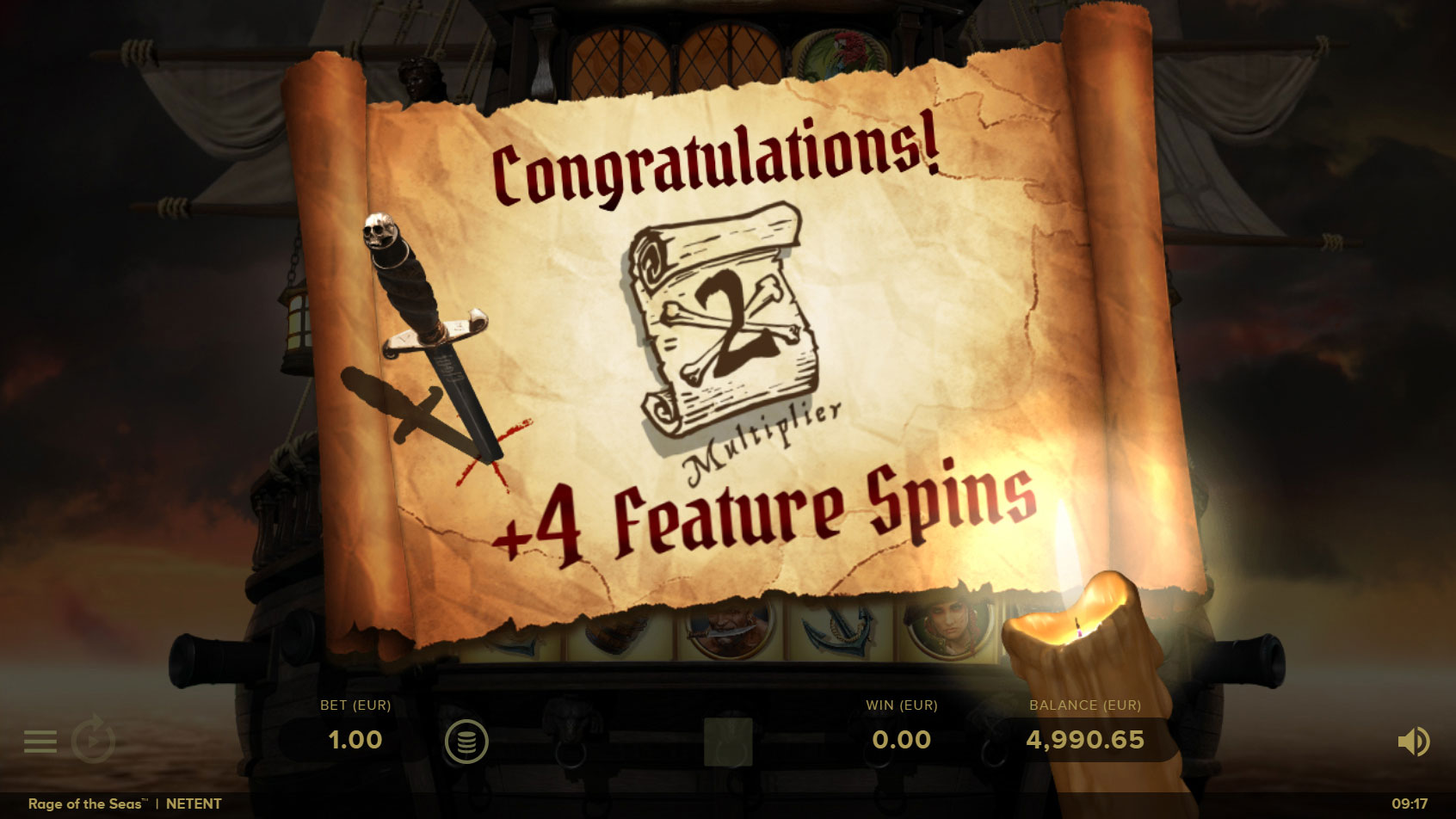 At 27,440x the total bet, the game’s top jackpot is much more rewarding than a trip beneath the waves to see Davey Jones. Meanwhile, NetEnt says the Rage of the Seas slot RTP is 96.04% and the game is considered a highly volatile one compared to other online casino games.

The Rage of the Seas slot game also has both an Auto Play and Turbo Spin function. With them active, you’ll get through more spins quicker but be careful and always play safe on slots games online.

When the Boost Symbol lands and the monkey reveals additional reels, you’ll receive four feature Spins. One of five special features activates for them.

If you manage to land three Boost Symbols on the middle three reels, you’ll trigger the Rage of the Seas Free Spins mode with three of the five features active. We’ve details them below. You can also trigger Free Spins by landing three or more Scatter Symbols simultaneously. Three, four, and five Scatters triggers five, eight, and 12 Free Spins respectively.

The first feature is the Spreading Wild Symbol. The kraken can land anywhere on reels two, three, or four. It sticks up to two Spreading Wilds into adjacent positions to make potentially massive winning combinations.

The Stacked Wild can also appears on the central three reels. It can take up between one and four positions.

The next two special features are the Major and Minor Reel Upgrades. They transform lower value symbols on the reels into higher paying ones. This can make for much larger winning combinations.

The betting limits on the Rage of the Seas online slot range from just 20p to £400. To adjust your stake, just click the stack of chips to the bottom of the reels. 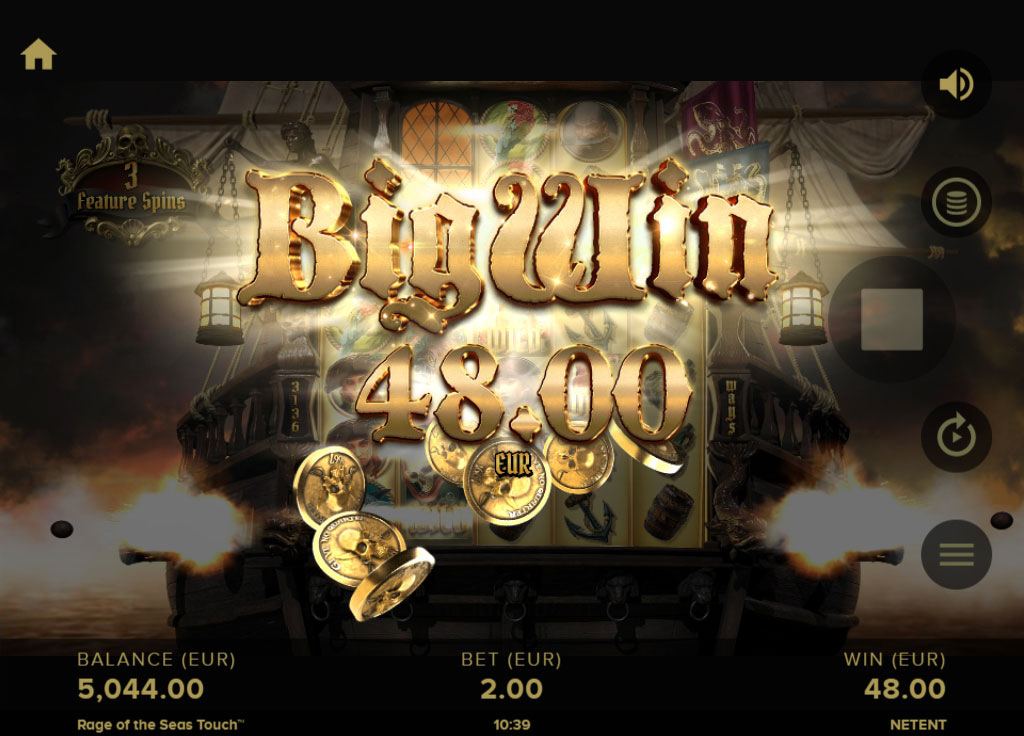 If ye ain’t the sea legs to try the game out for real right away, Captain OJO has the perfect solution. He provides free versions of many online slots and this one is no exception. Just load up the Rage of the Seas slot demo and give it a try without risking your own money. OJO says…

Thanks to its diverse features and unique expanding reel dynamic, the title’s gameplay is almost as exciting as a real adventure out on the open waves. You can see for yourself if you play Rage of the Seas in the UK at PlayOJO… Landlubbers need not apply!

NetEnt’s Ghost Pirates. If the pirates on Rage of the Seas weren’t fearsome enough for you, perhaps the ghoulish Ghost Pirates will be. With its Free Spins feature complete with multiplier, sailing with this undead crew can be pretty lucrative too!