Hi there, OJOers! Have we got a treat for you! Inspired by the many great online casino games you can play here at PlayOJO, we thought it was time to have a go ourselves. Today, we can finally present to you, the PlayOJO Megaways slot – an online slot dedicated to everyone’s favourite casino mascot!

The launch of the PlayOJO Megaways slot has the star of the show feeling pretty generous. OJO’s offering all his newest pals that signup and deposit a gift of 50 Free Spins. The best part? There’s no wagering requirement!

Since he knows you lot are all about that sweet moolah, the game’s high value and special symbols are all depictions of wealth. It’s up to you to form winning combinations of either silver and gold bars, or giant gemstones.

The Wild Symbol for the PlayOJO Megaways slot machine is similarly decadent. Not only is it diamante-encrusted but there’s a 2x Multiplier Wild too. We told you OJO was feeling generous!

Megaways for a Mega-Star!

OJO wanted his namesake slot to be as exciting as possible for his pals. That’s why he went with the ever popular Megaways format. Unlike many games you encounter when you play slots online, there are no win lines or fixed numbers of rows here. Instead, the number of symbols on each reel changes with every spin. It might be just two symbols or maybe it’ll be seven! 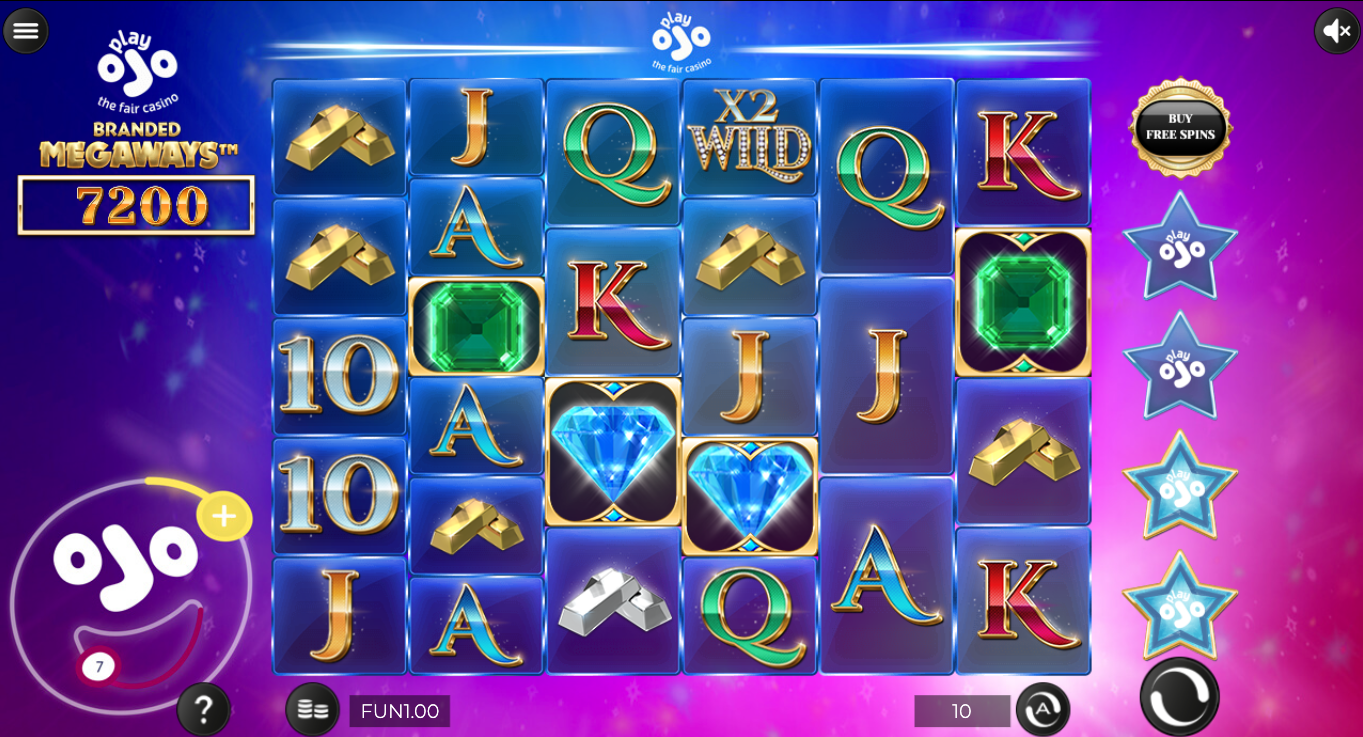 Whenever you land three or more of the same symbols on consecutive reels, you’ll win a prize. When each reel shows the maximum seven symbols, the PlayOJO Megaways slot game has 117,649 ways to win!

The PlayOJO Megaways slot RTP rating is 96.2% and the game is a high to very high volatility one. Since OJO knows most of you are all about those big pay-outs, he set the maximum possible win to a jaw-dropping 40,000x the total bet! 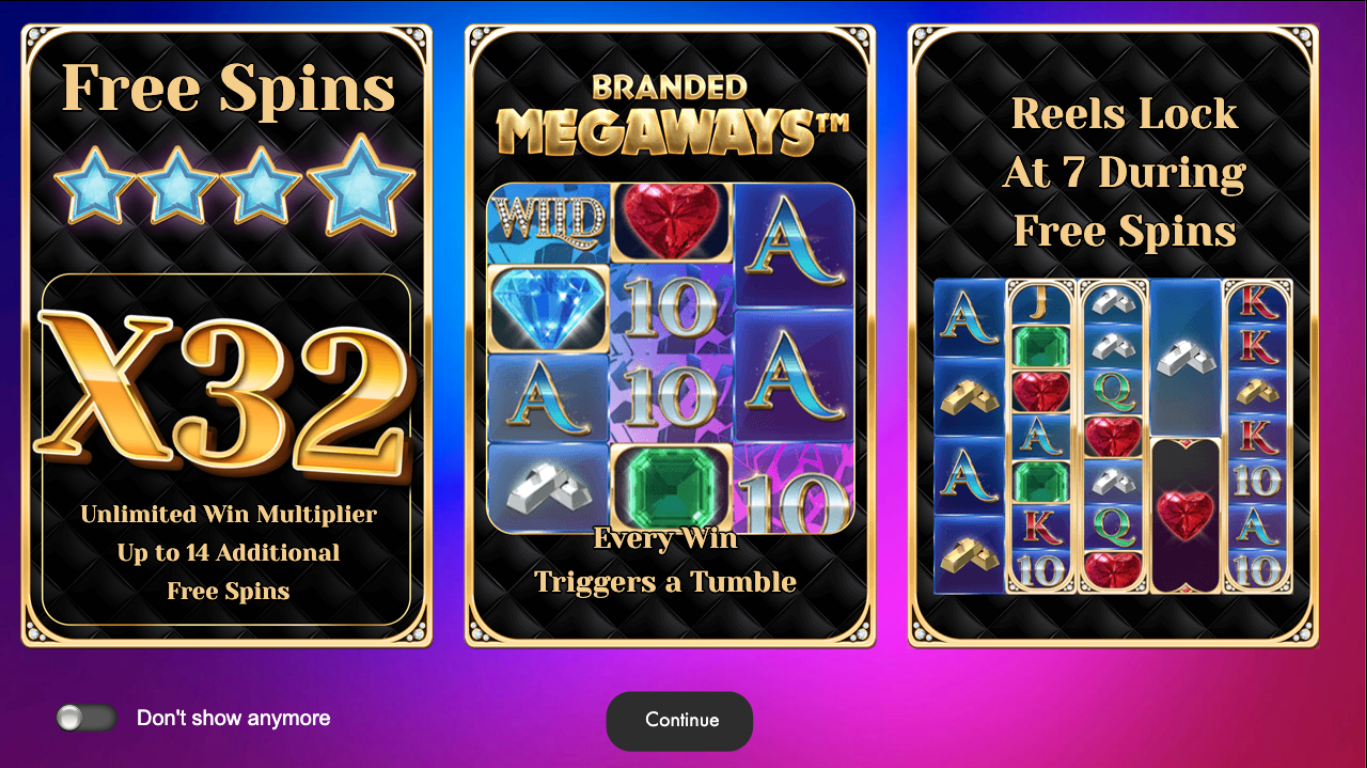 OJO even catered to those of you who find pressing the Spin Button a little taxing. Like all the best online casino games, there’s an Auto Play function. Just remember to play responsibly – especially when the you have Auto Play active.

The PlayOJO Megaways slot machine is ready for desktop, tablet, mobile. Wherever and however you like to play, you can do it with OJO!

Every time you make a winning combination on the PlayOJO Megaways slot, the Tumbling Symbols feature will kick in. After you receive your pay-out, the winning symbols disappear. The symbols above the blank spaces fall to fill their places. This makes room for new symbols to drop in from the top and means you get extra chances to win!

OJO thought long and hard about the Free Spins feature he wanted to include on his very own slot. He decided to add a few special twists to make it not only more exciting but potentially more lucrative! 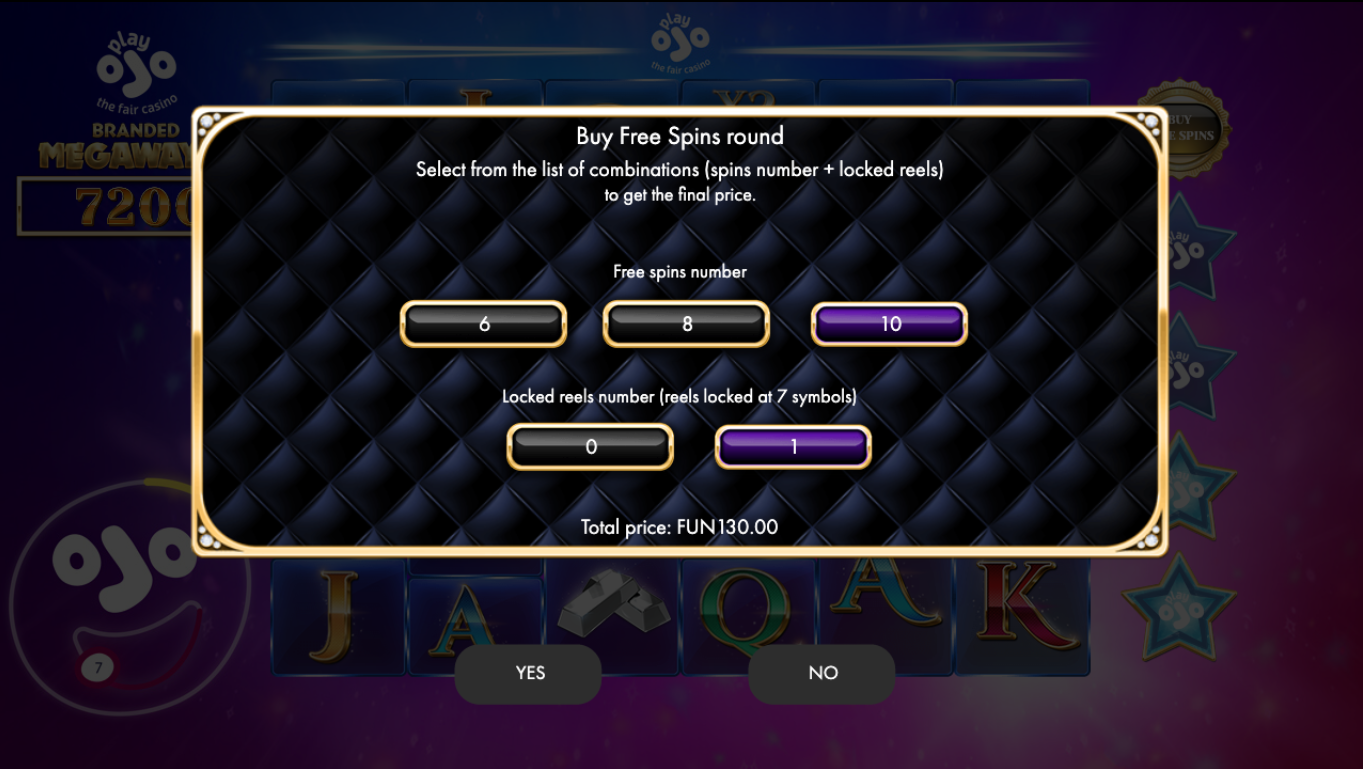 Knowing that Megaways slots are at their most thrilling when the maximum number of winning combinations are possible, the first addition to the Free Spins feature is Locking Reels. During the Free Spins, whenever the reels show seven symbols, they lock for the rest of the feature. This maximises you chances to win!

Sticking with the decadent theme, the second little extra on the PlayOJO Megaways slot Free Spins is an Unlimited Win Multiplier. During Free Spins, each time you trigger a Reel Tumble, the Win Multiplier increases by 1x. And, yes, you heard right. There’s no limit on how high the multiplier can go!

To trigger the PlayOJO Megaways slot Free Spins, you just need to hit four consecutive Reel Tumbles. Each Tumble will fill in one of the stars to the right of the reels. You can also stake a little extra to activate it too.

How Much Can I Bet on the PlayOJO Megaways Slot?

OJO’s ecstatic about his new slot machine and he loaded it with a host of special features so you’d get just as excited as he is. With 117,640 ways to win, Reel Tumbles, and a super-generous Free Spins feature, he reckons you lot will have as much fun playing the PlayOJO Megaways online slot as he had designing it. Play the PlayOJO Megaways slot in the UK only at PlayOJO to see for yourself!

Beetlejuice Megaways by SG Digital. With a similar pay-out dynamic, cascading reels, and a great Free Spins feature of its own, OJO thinks this one’s nearly as thrilling as his own creation!