Keep an eye for OJO when you’re in the jungle because the king of Silverback Gold slot might get the better of you.

Among the hundreds of software providers who are working relentlessly round the clock, some have established themselves as the forerunners. NetEnt is one of them and it has contributed hugely in shaping the iGaming industry for the better.

OJO is a huge fan of the video slots developed by this provider. Especially, Gonzo’s Quest has been a cult favorite among slot lovers around the world. For today, OJO would like to focus on one of the newest offerings from NetEnt, the Silverback Gold slot.

Silverback Gold slot was released back in 2021 which makes it a very fresh entry at the time of writing. If you haven’t guessed already, the Silverback in the name comes from Silverback Gorillas. And their presence is quite prominent throughout the game.

Silverback Gold is a 5-reel video slot with 4 reel positions. It effectively gives you a 5x4 layout. In terms of paylines, there are 1024 of them and they’re all fixed. So, you won’t find the proprietary “Level” feature usually found in other NetEnt slots.

The game offers a very broad bet range. But unfortunately, the entire range is not open to Canadian players. For example, at OJO, you can bet between C$0.1 and C$5. As a result, the maximum payout from Silverback Gold slot is capped at C$225,000.

On the game interface, you can find all standard button offerings from the provider including the Autoplay and Quickspin features. 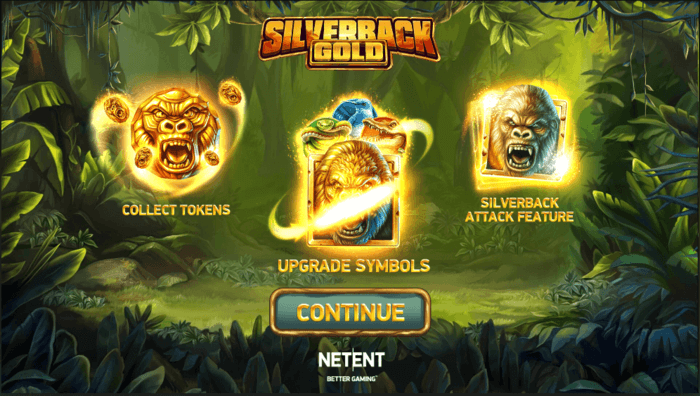 Just like Gonzo’s Quest, the Silverback Gold slot is also based in a jungle. The difference is that the symbols are mostly related to the jungle rather than the riches of El Dorado. Also, there are no characters to follow. This title is also 5x4 instead of 5x3.

Being a newer game, the visuals on this are awesome. The crystal-clear textures with amazing shading are a treat to the eyes. There are even subtle animations to maintain the immersion. Every time a payline is hit or a bonus feature is triggered, the entire screen lights up with various animations to draw your attention.

As for the audio, it’s very cleverly designed to go with the theme. There’s an upbeat theme that feels very natural to the jungle background. You can hear the silverback gorillas when the symbols are on the grid. Overall, it’s going to be a very pleasant experience for you.

Thanks to the 1024 paylines, you get lots of symbols in Silverback Gold slot. Most of them pay moderately. Needless to say, pretty much all of them are animals. You know, to keep the jungle theme consistent.

The golden silverback pays the most which is 8x your bet for 5 on a payline. OJO knows it’s not impressive at all considering some of the other online slots from the same provider. But you have to consider the staggering number of paylines that are in action all the time.

The next symbol that pays the most is the regular silverback and it pays 4x your bet. The crocodile and the cheetah pay the same. It’s 3x your bet for 5 on a payline. The snake and the bird pay the same again and it's 2.5x your bet.

If you thought we were done with the symbols, well, we haven’t covered the scatter and the wild yet. The scatter is a gold plate with a ruby engraved in the middle. It’s responsible for triggering the free spins round and the bonus game.

There are a total of 3 wilds in the game. The red sun, the 2x bright sun, and the 3x bright sun. the 2x and 3x are referring to the multipliers. If you’re lucky enough to have them replacing other symbols, you can get 2x or 3x of your original payout. 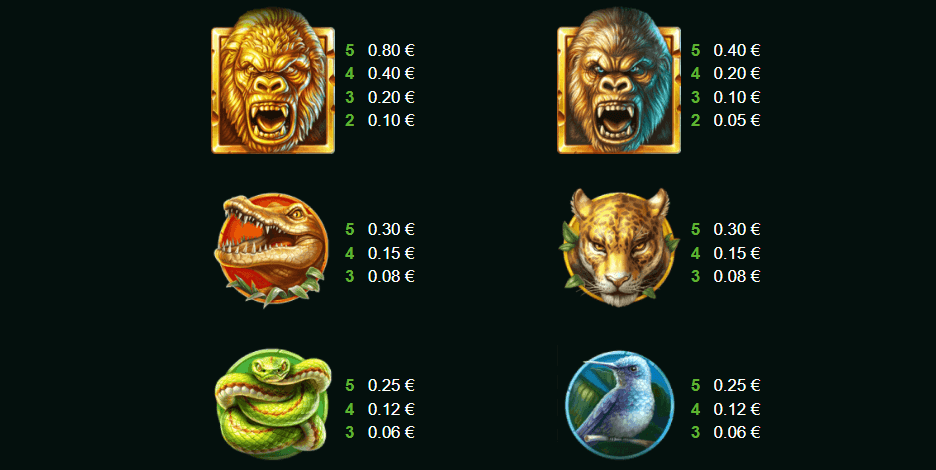 Whenever there’s a NetEnt slot in question, you stand a chance to enjoy more than one bonus feature. The same has happened to Silverback Gold slot. Let’s tackle them one by one.

NetEnt has done a fantastic job since its inception to keep the players entertained. Silverback Gold is yet another feather to NetEnt’s crown. Get a taste of this game at OJO right away.