Defeat the fearless dragon Ying Long and retrieve the famed treasures hidden by Yu the Great in this Asian adventure-themed slot from ELK Studios!

OJO loves Asian-themed slots and more so if there is a thrilling sense of adventure infused into it in good measure! If that sounds like a great idea to you as well, OJO would highly recommend the Mystic Orbs slots from the Swedish provider ELK Studios.

The Mystic Orbs slot is not the only Asia-centric game from ELK Studios but OJO thinks it is definitely one of the best. One of the reasons why OJO thinks that is because of the clusterpays mechanism on which this game operates.

If you have never encountered or heard about the clusterpays mechanism, you might be surprised to hear that there are no paylines in a clusterpays slot. Instead, you need to form clusters of symbols to win. In the Mystic Orbs slot, forming a cluster of 5 or more matching symbols leads to a win. 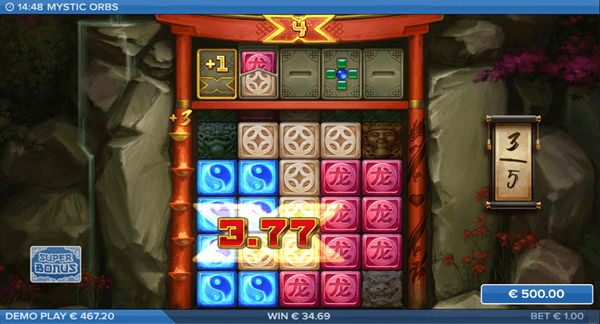 The game features a 5x5 grid, which means there are 5 reels. There is an additional feature row at the top whose function becomes apparent when it is time to trigger a bonus feature.

The RTP of the game is exactly 95%, which is not the best amongst online slots. However, since the Mystic Orbs slot packs so much in terms of bonus features and win multipliers, the lower RTP can be overlooked to some extent.

Both the minimum and maximum bets are quite low. You can play with as little as C$0.2 but you cannot bet more than C$10 on a single spin.

Despite the maximum bet limit, the maximum win potential for the Mystic Orbs slot is reported to be C$250,000. All things said and done, that is a hefty amount for you to win if you get lucky. 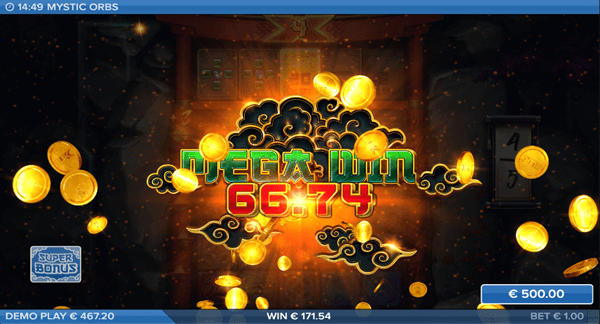 The theme and the sound design in the Mystic Orbs slot are fairly straightforward. It is a treasure hunt. The background music is also traditional Asian music imbued with a modern twist.

The grid functions as the gate to a hidden treasure. The treasure of Yu the Great is hidden inside a chamber in a mountain. Your task as the player is to defeat the dragon Ying Long, who is guarding the gate, and unlock the treasure.

In keeping with the Chinese mythology inspired theme, the symbols in the Mystic Orbs slot also stay true to the overarching ambiance of the game.

There are 3 kinds of wild symbols. There is the dragon, which is just the wild. There are also wild orbs and charged wild orbs.

The dragon symbol acts just like other typical wild symbols in slot games. It substitutes all other symbols except orbs. 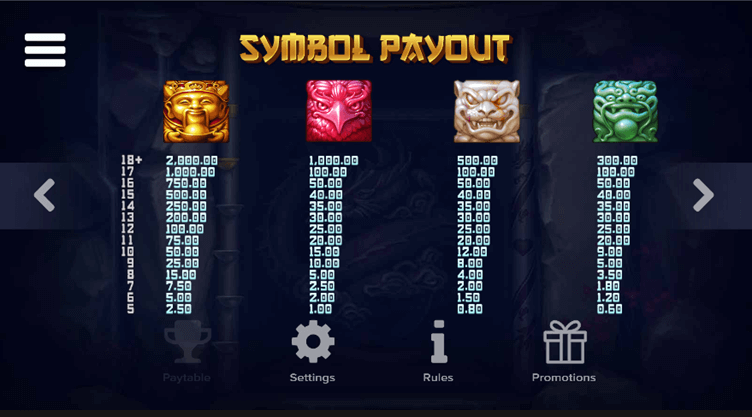 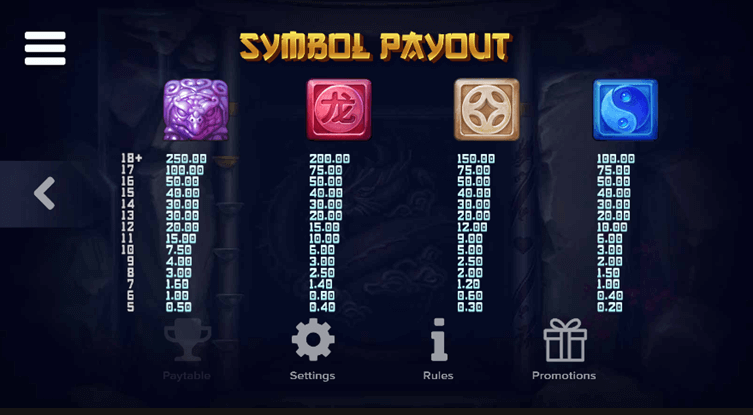 Remember the extra feature row that sits atop the main grid of the Mystic Orbs slot game? They contain several features that can be triggered by the landing of wild orbs as well as charged wild orbs on the grid.

The features row contains 5 features at any given time. Once a feature is activated, it is replaced by another newer feature.

The common features that you will find on the features row include:

The Mystic Orbs slot also has a bonus games feature. It is triggered by getting 5 orbs and can be retriggered again. There is also a win multiplier that keeps increasing during the bonus game rounds. Thereby increasing your chances to win colossal amounts!

If you strike a winning combination, the avalanche feature destroys the winning symbols. They are replaced by newer ones. Just like in a cascading reels slot, this paves the way for multiple wins with a single spin!

The Mystic Orbs slot needs some improvements in terms of its music, visuals, and ambiance. But the game is full of surprises and excitement. That is in most part because of its clusterpays mechanics and its series of bonus features.

However, if you wish to enjoy the same excitement in a game with a better user experience, OJO recommends the Diamond Mine Megaways slot. If you consider yourself a braveheart, check that one out too!