Get your shovels because you’re going mining with OJO. Where? Under the ground where Diamond Mine Megaways slot is!

Well, the Megaways mechanic needs no new introduction at this point. It has been a tried and tested feature for online slots. In the initial days, only Big Time Gaming titles had this feature. Later, BTG was kind enough to license it to other providers and the world finally got to see what it was like to play a Megaways game.

OJO was skeptical of it in the very beginning because he didn’t understand it. As of now, he plays them all the time and he’d like to tell you all about the Diamon Mine Megaways slot.

The Diamond Mine Megaways slot is developed by Blueprint Gaming. It’s one of those online slots providers that are often associated with the Megaways mechanic. It’s because Blueprint has developed quite a few of them in recent years.

As Megaways slots usually are, Diamond Mine has 6 vertical reels and 1 horizontal reel. We’ll still call it a 6-reel video slot because the 7th reel operates independently. Along with the six reels, the game can have up to 4 rows. The number of rows is dynamic, just as the paylines.

Speaking of the paylines, there are 117,649 of them in this Canadian online casino. It’s of the magnificent beauties of the Megaways mechanic. You get way more paylines than you could ever hope for. In fact, you don’t even know how many will be active for your next spin!

The bet value for the Diamond Mine Megaways slot at OJO ranges between C$0.20 and C$500. You can win up to C$250,000 from this game. If there were an in-game jackpot feature, you would’ve won even more!

Last but not least, this game has the cascading reels feature integrated into it. If you don’t know what it is, it’s basically when the TNT barrels explode and new symbols drop from above, in the same spin. It increases the frequency of payouts quite a lot. 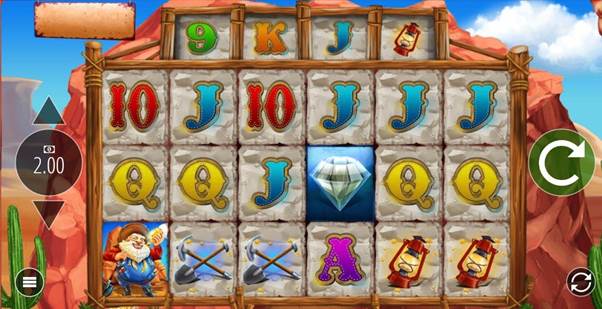 The title of the Diamond Mine Megaways slot is pretty self-explanatory in terms of theme. The grid where all the reels and paylines are located looks like something right out of a diamond mine. The backdrop, however, takes place under the open sky with beautiful clouds flying around.

The animations in this game are top-notch. There are two types of explosives in the game that explode quite often. It’s such a beautiful touch by Blueprint Gaming to make the game more immersive. Because you can’t think of a diamond mine without a few sticks of TNT, can you?

The audio track that runs underneath the game is very neutral. Due to the complex mechanics of the game, the overlaying soundtracks are quite bumpy and uplifting at the same time. The use of Banjo is quite noticeable.

Overall, you’re going to have a “blast” with the Diamond Mine Megaways slot, no pun intended.

The symbols in the Diamond Mine Megaways game are quite a standard offering from Blueprint. You get the royals, the high paying symbols, and the special symbols.

Can you guess the highest paying symbol? Yes, it’s a diamond and it pays up to 50x your stake if it's present on all 6 reels. The rest of the symbols don’t even come close.

As you can see, the payouts for individual symbols are not very impressive in the Diamond Mine Megaways slot. However, you will be a fool not to try this game after looking at the paytable. Because it’s a Megaways title, remember? The hit rate is crazy high in this game. So, you will gradually build up the funds if you keep playing. 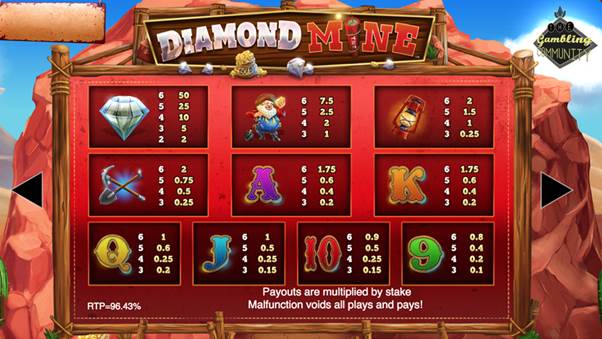 The most commonly triggered bonus feature is the barrel TNT. They land in big chunks and blast away to make room for new symbols. As hundreds of thousands of paylines are active in the game, you may as well generate some payouts when it happens.

The sack of gold is the scatter symbol in the game. You need only 4 of it anywhere on the 6 reels to trigger the free spins round. The game will show a real-time count on how many free spins you’ve received. During the free spins, if you get 3 scatters again, you’ll receive additional free spins.

Thanks to the multipliers in the game, you can win up to 10,000x your stake. The multiplier will keep increasing with every winning combination. And from what we can tell, it’s going to happen a lot.

Megaways games never cease to amaze OJO. If you still haven’t tried one yet, the Diamond Mine Megaways slot might be the perfect way to get started in Canada. If you’re confused with the mechanics, just ask OJO.