Fire Hopper Slot: The Reign of the Fireflies

If you ever feel that you need a break from traditional payline-based titles, the Fire Hopper slot might be what you’re looking for. Whenever OJO feels too overwhelmed with all the modern mechanics, he tends to play this game. And he’s quite excited to talk to you about it.

Fire Hopper slot is one of the many games from Push Gaming’s library. It’s one of those providers that you don’t hear about too often. So, OJO isn’t surprised if this is the first time you’ve heard of it.

The game features a massive 7x7 grid, which means there are 7 reels and 7 reel positions. As a result, the game doesn’t have any defined paylines. Instead, it follows the Clusterpays mechanics.

Basically, you have to form a cluster with a single symbol to generate a payout in these games. As Push Gaming likes to call it “matching symbol game”. 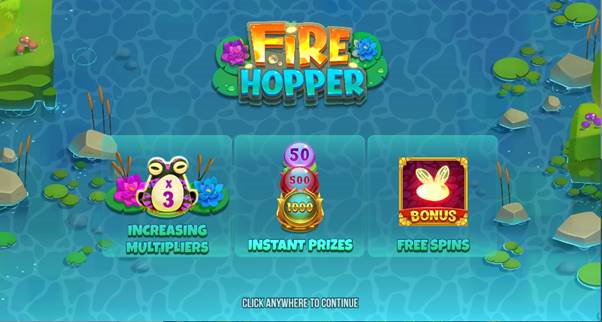 If you’ve played the Reactoonz slot by Play’n Go, you already know how the grid of a Clusterpays game look. As for the Fire Hopper slot, you get a very soothing background which is of a flowing water body.

Interestingly, the backdrop of the game is more interesting to OJO than the actual grid in terms of visuals.

Most of the symbols in the game are flowers resting on water lily leaves. The grid is set right in the middle of the screen with the game logo on the top left corner. What we like the most about the visuals of the game is that there are no overly-bright elements.

You know what we’re talking about? Sometimes there are elements in a game that distracts you from the main game. There’s nothing of that sort in Fire Hopper slot. The audio is just as good as the visuals. You can hear the mild flow of water. Every cascading motion has a fixed sound effect that goes really well with the overall theme.

As there are no paylines in the game, the symbols pay a little differently when compared to most other online slots. It follows clusterpays mechanics accompanied by a cascading motion. Basically, you have to form clusters with at least 5 symbols to generate a payout. Needless to say, there are lots and lots of symbols in this 7x7 video slot.

You may already know that most of the symbols are flowers. You get a total of 6 of them. The red flower, the orange flower, the pink flower, the purple flower, the green flower, and the blue flower. The sequence we’ve written them in is the sequence of the value depreciation.

The payouts for each symbol will gradually increase as you get more of them on a cluster. It keeps increasing until you get to the 20. From 20 and above, the clusters pay the same.

The game also has 2 wild symbols which are known as the Wild Gold Frog and the Wild Frog. They can substitute any symbol on the grid except for the firefly symbols. We’ll get to these in a moment.

The frogs always come with a multiplier attached. It increases every time you get the “Leaping Frog” feature. Needless to say, it’s a bonus feature we’re about to explore in the next section.

Last but not least, there are two different firefly symbols. The regular firefly and the bonus firefly. Both of these are non-paying symbols but they contribute to triggering the bonus features. 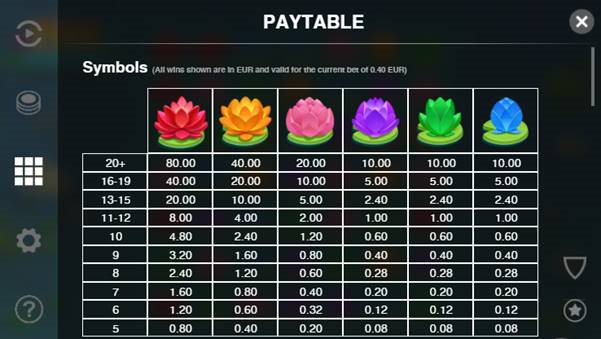 OJO has already hinted the bonus features of the game to you, hasn’t he? Let’s start with them right away.

• Leaping Frog: When a firefly and a frog symbol are present on the grid at the same time, the Leaping Frog feature is triggered. Basically, the multiplier attached to the frog “leaps” by 1 every time it happens. You’ll leave behind a Wild Gold Frog whose multiplier will also be included in your payout.

• Instant Prize: It’s a dedicated symbol in the game that can get you, well, “instant” prizes. It’s only triggered when the Leaping Frog is active because the leaping frog has to land on this symbol.

• Free Game: When the leaping frog collects a bonus firefly symbol, the bonus game is triggered. You win 7 free spins. This round cannot be retriggered.

• You can set loss limits

Push Gaming may not make too much noise in the iGaming industry but it has certainly gifted us some amazing game titles. Fire Hopper slot is one of them. If you’re intrigued to try out the unique mechanics, sign up now.