Play’n Go has been on OJO’s hit list for quite some time now. The main reason is that this developer makes some of the funkiest games in the industry. And OJO’s been looking for the developers to ask them how are they so creative!

Reactoonz is one of the games from Play’n Go and OJO can’t seem to get enough of it. This game is very unique and has broken all the barriers of traditional online slots as we know them. How? Let’s find out. 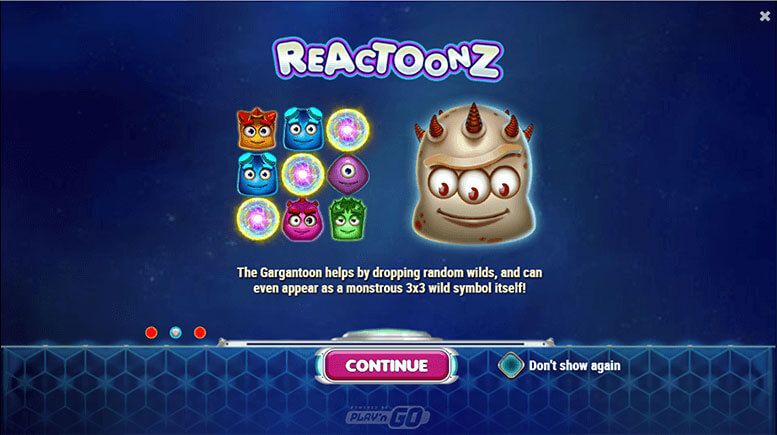 The first thing that’ll get your attention the moment you open this game is the layout. Just by the name Play’n Go, you were expecting a 5-reel video slot, something like the Book of Dead, right? Well, get ready to be surprised from here on.

Reactoonz features a 7x7 grid layout filled with alien symbols. And it doesn’t have any defined paylines! The mechanics of the game is called “Clusterpays”. Basically, when you have to at least 5 of the same symbols on the gird, you win. The payout depends on what symbols you matched.

Another interesting thing about Reactoonz slot is that the reels don’t spin. Instead, it follows a cascading motion where the entire grid falls down and a new one shows up. You can’t miss it when you win because there will be lots of things happening on the screen at the same time. You get to win up to 4570 times your stake if the stars all align over your head. 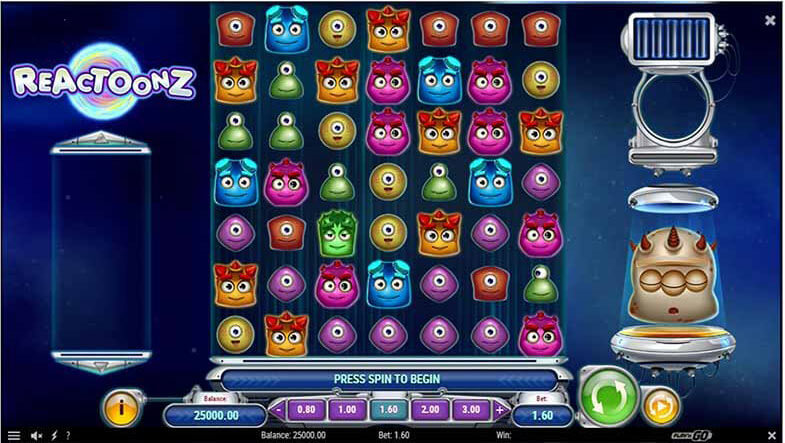 One of the reasons OJO is so in love with this game is that the name doesn’t give away the theme right away. You actually have to get inside the game to see what’s it about!

It’s an alien-themed slot game with all alien symbols. These aliens are not nearly as scary as the ones in James Cameron’s Alien. Instead, these are funky little aliens that look more like the monsters from the Monsters movie.

In the traditional Play’n Go style, the game is very colourful and offers mind-blowing graphics in this Canadian online casino. In terms of audio, a funky yet ominous track that runs throughout the game.

As you already know, the symbols are all aliens. You have round yellow aliens, diamond-shaped purple aliens, pentagonal red aliens, green bottle-shaped aliens, blue two-eyed aliens, pink aliens, and the square orange alien with horns on its head.

The primary wild symbol is the Gargantoon which is a three-eyed alien. It can replace all other aliens on all of the reels. There is a regular wild in the game as well.

Just how the base game is so innovative, the bonus features are as well. Let’s see what you can expect from the Reactoonz slot.

Reactoonz slot could be the best way to unwind after a long day’s work. Why? Because who doesn’t like to see cartoon aliens destroy each other in a funny way? Get yourself a PlayOJO account right now to explore this unique game.