Wizards are scary and OJO is just as afraid as you are. However, they do trigger immense curiosity inside him. A few days ago, he heard about a Blue Wizard who lives in the “Wizard House” and he can’t wait to meet the guy. And as usual, he wants you to go with him.

Yes, we’re talking about the Blue Wizard slot from Playtech but with the Fire Blaze and Megaways twist. If you’ve played other online slots with this feature like the Tundra Wolf, you know how fun it can be.

This is a video slot from Playtech, made in association with Rarestone Gaming. Also, the Megaways feature works under the license from Big Time Gaming. It’s not every day that you come across one slot that has contributions from three different providers. Another game that utilizes the same mechanics is the Fire Blaze Tundra Wolf.

Fire Blaze Blue Wizard Megaways slot is technically a 5-reel slot with an additional horizontal reel on top. Every press triggers all of the reels to spin and that’s a sight to comprehend.

It might be a little much for new players to track everything that's happening. But hey! This is a magical slot so this is what’s supposed to happen!

The game is a Megaways title so you already know you have lots of paylines. To be precise, every spin can trigger between 108 and 12,348 paylines. Different reels have a different number of symbols and that’s what triggers the dynamic Megaways paylines. 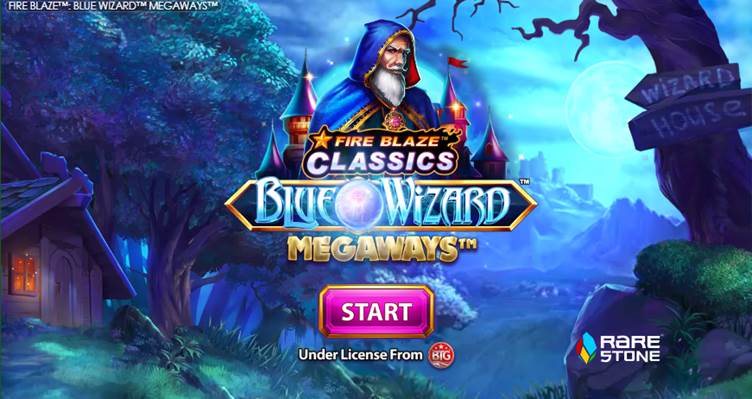 In a game called Blue Wizard, the theme is exactly what you have envisioned. On the right side of the screen, you’ll see a sign that points to the “Wizard House” and you can see it on the left side of the screen. There’s a humongous moon that shines through the mystic fog in the air. Overall, it’s a very ominous visual to look at this Canadian online casino.

The symbols of the game have a similar magical appearance. As for the audio, it complements the main theme of the game very well.

Before we get into the regular symbols, let’s look at the special symbols of the game. First up, we have the Wizard wild. It appears on reels 2, 3, and 4 and can replace all symbols except for the scatter, the lightning, and the crystal ball.

Speaking of the scatter, it’s a magic castle right out of the Disney movies. The Crystal ball is the bonus symbol that can trigger the Fire Blaze Respins feature.

The lightning only appears on the top reel that goes from right to left horizontally. Its purpose is to improve the wilds or crystal ball symbols.

Apart from these special symbols, you have an owner, a magic potion, a magic book, and a magic ring. Lastly, the A, K, J, and Q, also known as the royals are present in this game. 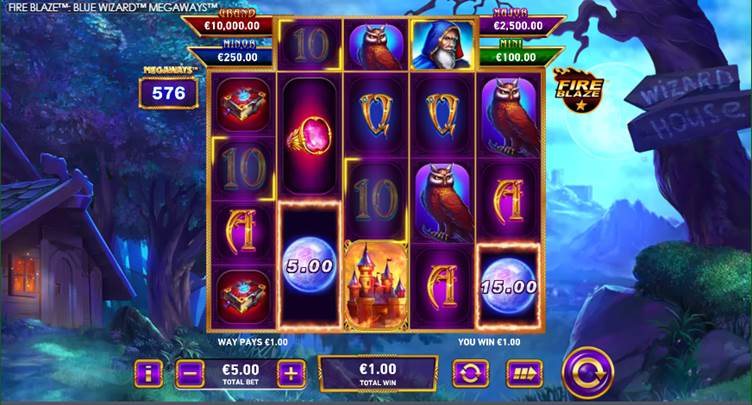 Also, if you land 3 scatters anywhere on the reels, you’ll get 6 free spins. During these spins, the top reel will only move by one place to the left instead of changing all the symbols.

The game definitely feels interesting, doesn’t it? OJO knows it very well because he has spent his fair share of time with Wizards. If this is your first time, then we have to say Fire Blaze Blue Wizard Megaways slot is the best place to start.