The Dangerous Wolves of Tundra vs OJO

Playtech’s take on the Tundra regions is better than we could ever hope for. Jump into the game experience it firsthand

The tundra is one of the most extreme forms of nature and you can find enough of them in Canada. As OJO is always a fan of the extreme, he is going on a Tundra adventure this winter. There’s a good chance that he’ll come across wolves in his journey so he’d like you to accompany him.

To get in your practice, you can play the Fire Blaze Tundra Wolf slot by Playtech before your flight takes off. This is a video slot from none other than Playtech, one of the giants in the iGaming industry.

OJO has seen plenty of themes for online slots during his time. However, if one theme is still to be saturated, it would be the extreme beauty of nature. Fire Blaze Tundra Wolf slot tries to portray it as a 5-reel video slot.

The game is developed by Playtech in association with Rarestone Gaming. This game is very special because it comes with two different Fire Blaze modes to give you the flavour of two different games in this online casino in Canada.

The game offers 94.46% RTP and medium to high volatility for the players. It has 40 fixed paylines which means all of your spins will target all 40 lines at once. 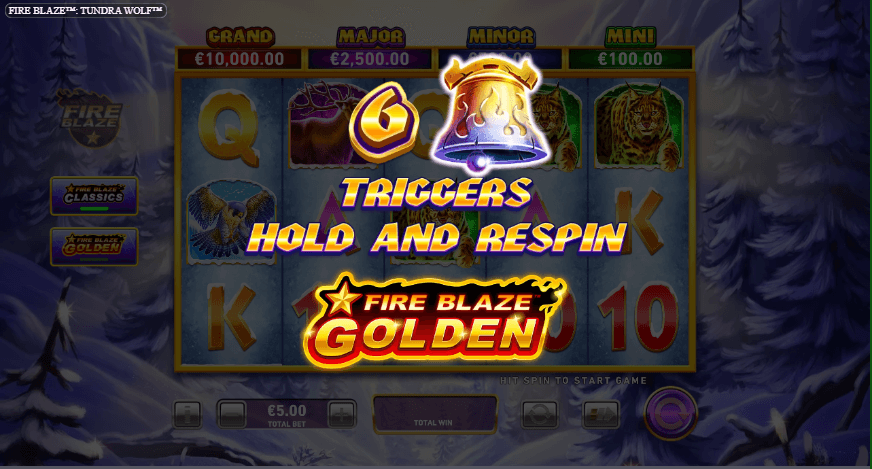 The theme is definitely wild. But that’s what you expected, right? On the backdrop, you’ll see snow-laden trees of the Tundra. The rays of the bright sun will come around the grid in the middle of the screen. A very nice touch in terms of the graphics is accumulated snow on top of the symbols.

The sound design is just as wild as the theme itself. At any point during your gameplay, the sound, both the background and the foreground will not feel out of place to you.

Considering the theme of this video slot, it’s quite obvious that most of the symbols would be wild, whether animals or plants. And we see the same in reality. All the high paying symbols are Yalk, reindeer, cheetah, and Eagle. The wolf logo is the wild symbol for the game.

Along with these high-paying symbols, there’s are two bonus symbols that appear on Fire Blaze Classic and Fire Blaze Golden mode respectively. These symbols would be the moon symbol and the bell symbols.

Then, you have the regular A, J, K, Q, and the scatter. The scatter is a howling wolf with a full moon in the background.

How the symbols pay change based on what mode you have selected. For example, on the Classic mode, the Yalk symbol pays C$18.75 while the Golden mode pays C$20.00 for 5 on a payline.

The scatter is the highest paying symbol in the Fire Blaze Tundra Wolf slot, and it pays C$250 for 5 on a payline. 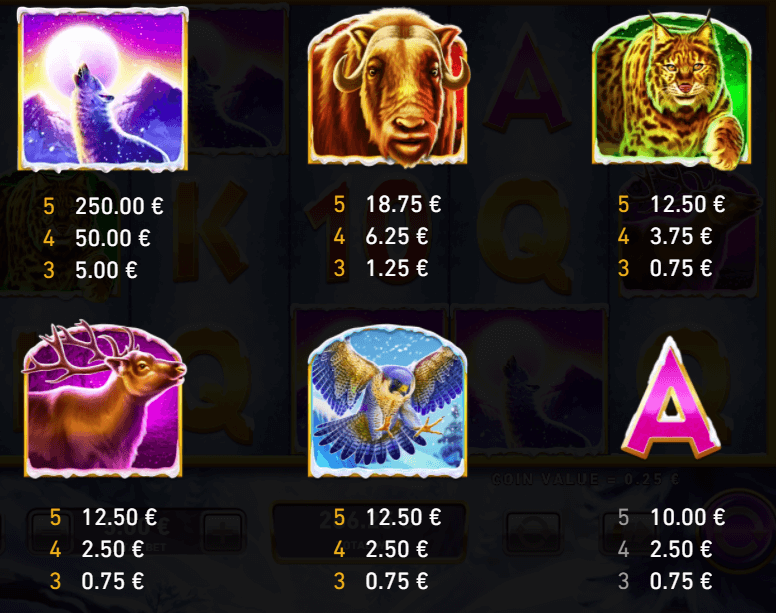 The bonus features are completely based on the two modes of the game. The Moon symbols only appear when the classic mode is selected and the Bell symbol appears when the Golden mode is selected.

Whatever mode you’re on, if you land 6 Moon or Bell symbols on any reels, the Hold & Respin feature is triggered. During the bonus rounds, the bonus symbols would turn into cash prizes with MINI, MAJOR, MINOR, and GRAND labels.

Also, during the respins rounds, if another new bonus symbol appears on the reels, the number of respins is reset back to 3 again.

• Scatters pay the most for 5 on a payline

You should get to the game as soon as possible because you have to catch a flight with OJO, remember? This 5-reel Fire Blaze Tundra Wolf video slot packs all the entertainment Canadian players will need. Don’t forget to keep practicing whenever you have the time.