Egypt never ceases to amaze. We still don’t know how the Pyramids were built. It’s a country surrounded by a sheet of mysterious history and culture. As it happens to be, OJO is going there next and you’ve been chosen as his designated tour mate.

Do you know why he’s going there? To get inside the pyramid and to retrieve the Eye of the Horus. Interestingly, the online slot game we’re talking about on this page is also named Eye of Horus slot. Is that a coincidence?

The Eye of Horus slot is developed by None other than Reel Time Gaming for our Canadian amigos. It’s a simple 5x3 video slot. If you’re not sure what it means, the game has 5 reels and 3 rows where the symbols will land. The theoretical RTP of the game is rated at 96.31% which is very respectable for any video slot.

This is a medium volatility title so you can expect modern payouts from time to time. In moderation with the volatility, the symbols pay quite well as well.

Eye of Horus slot has 10 paylines but they’re not fixed. It means you can select between 1 to 10 paylines with increments of 1. It’s an amazing feature that allows the players to set their destiny as they see fit. 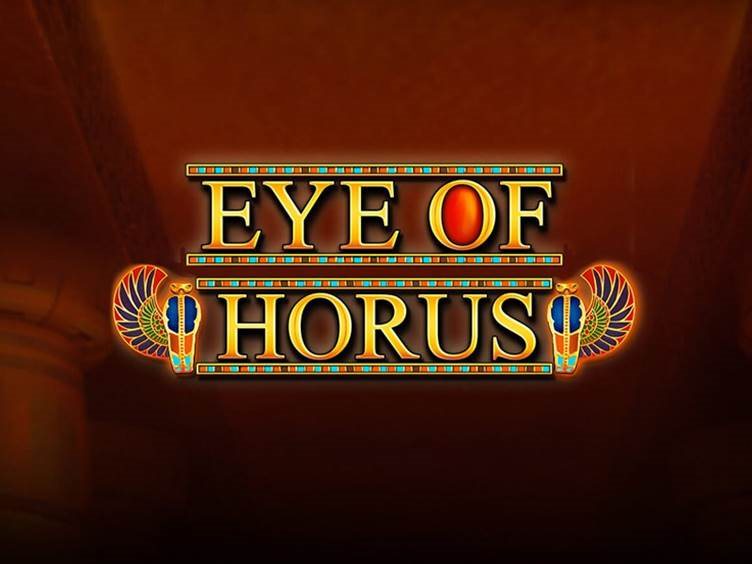 Similar to what you may have seen in other Egyptian online slots, this game has a very ancient Egyptian theme. At the beginning of the game, it will show you all the payline with a hip-hop background audio. OJO was quite surprised to find such modern audio on a game that revolves around ancient Egypt.

The game takes place on a beige backdrop which is essentially the colour tone you see on pretty much every Egyptian-themed slot. There is no prominent background audio on this game. You can hear the reels spinning and stopping. Short clips are played when you land a winning combination.

As you would expect from a slot of this calibre in this online casino in Canada, the Eye of Horus slot offers the Eye of Ra, Anubis, Scarab, Key of Life, the Bird, and the Fan.

The 2nd highest paying symbol is Anubis which can give you 400x the bet. The bird and the scarab pay 300x and 250x respectively. The last of the high paying symbols are the Key of life and the Fan where both pay 200x of your stake in this Canadian online casino.

Lastly, how can we forget the royals? They all pay up to 100x coins for 5 on a payline.

As for the Wild Symbol, it’s an expanding Horus so you’ll see it taking over an entire reel at once. It can replace any symbol on the reel except for the Pyramid. 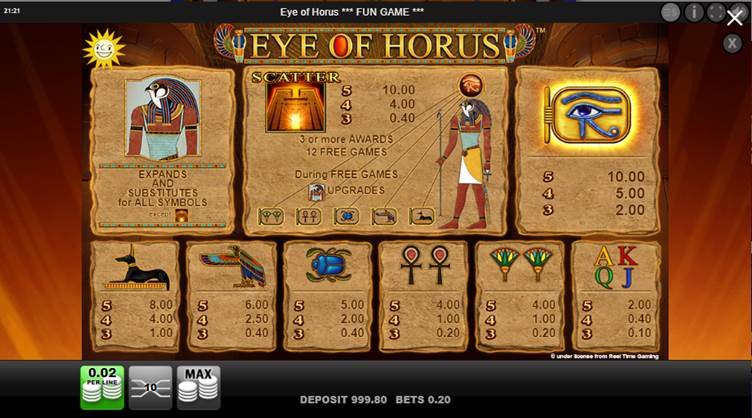 So, you already know that the pyramid symbol is the scatter. It not only pays massive but it also triggers the free spins round which happens to be the bonus feature of this slot game. When you have at least 3 pyramid symbols on your reels, you’ll receive 12 free spins.

During the free spins, every additional pyramid symbol will result in increasing the multiplier. Keep in mind that if you’re lucky enough to get even more Horus symbols during the bonus round, you’ll receive additional free spins.

Eye of Horus slot is one of the many Egyptian-themed online slots that have been OJO’s favourite for years. If you find solace in this theme as well, this would be the perfect time to sign-up.