If you’ve played with OJO before, you must’ve come across the Book of Dead slot at some point. It’s one of the most popular video slots the software provider has ever released.

Do you know what’s another massively popular title from the same provider is? Legacy of Dead! OJO knows the titles sound awfully similar because they are. In fact, it belongs to the same series.

The titles of the games might be similar but the gameplay experience, not so much. In this review, OJO will take you on a journey to explore the Legacy of Dead slot. Let’s go.

How to play Legacy of Dead Slot

As you already know, it’s part of the Book series from Play’n Go where the developer is trying to bring all the lost civilizations together. Legacy of Dead has a similar Egyptian theme to its master counterpart, Rich Wilde and the Book of Dead.

This 5-reel video slot offers 10 paylines with very high volatility. If you’re not familiar with volatility, think of it as the frequency of payouts and the risks associated. High volatility slots are riskier but come with a higher payout. For the slot Legacy of Dead, it’s 5,000 times your initial stake. Considering the max bet value of C$10, you can win up to C$50,000!

The video slot offers a 96.58% RTP which means you can win C$96.58 from every C$100 you wager if you play long enough. RTP is audited over millions of rounds so you may not get the exact amount back for short sessions.

You already know that the Legacy of Dead slot has an ancient Egyptian theme. The plot of the game revolves around the underground tombs of the Pharaohs. The story is a continuation of the Book of Dead. Apparently, the spirit of the King has escaped. It’s your turn to explore his Riches.

The graphics of the game boasts the same quality as its predecessors. Crystal clear symbols on the reels enhance the overall gameplay experience. The sound is designed keeping the era in mind. So, you’ll get a soothing yet intimidating feel when you play this title.

As the theme of the game surrounds the King’s spirit, it’s only fair that the King is a prominent symbol in the game. Thankfully, King is not only a symbol in Legacy of Dead but it’s also the highest paying one! You can win 5,000x the stake if you land 5 kings on all 5 reels.

Other high paying symbols are the Anubis, Tutankhamen, and Horus. Anubis possesses the power to pay 1,600 times of your stake while Tutankhamen and Horus share the same power of rewarding 600x the stake. 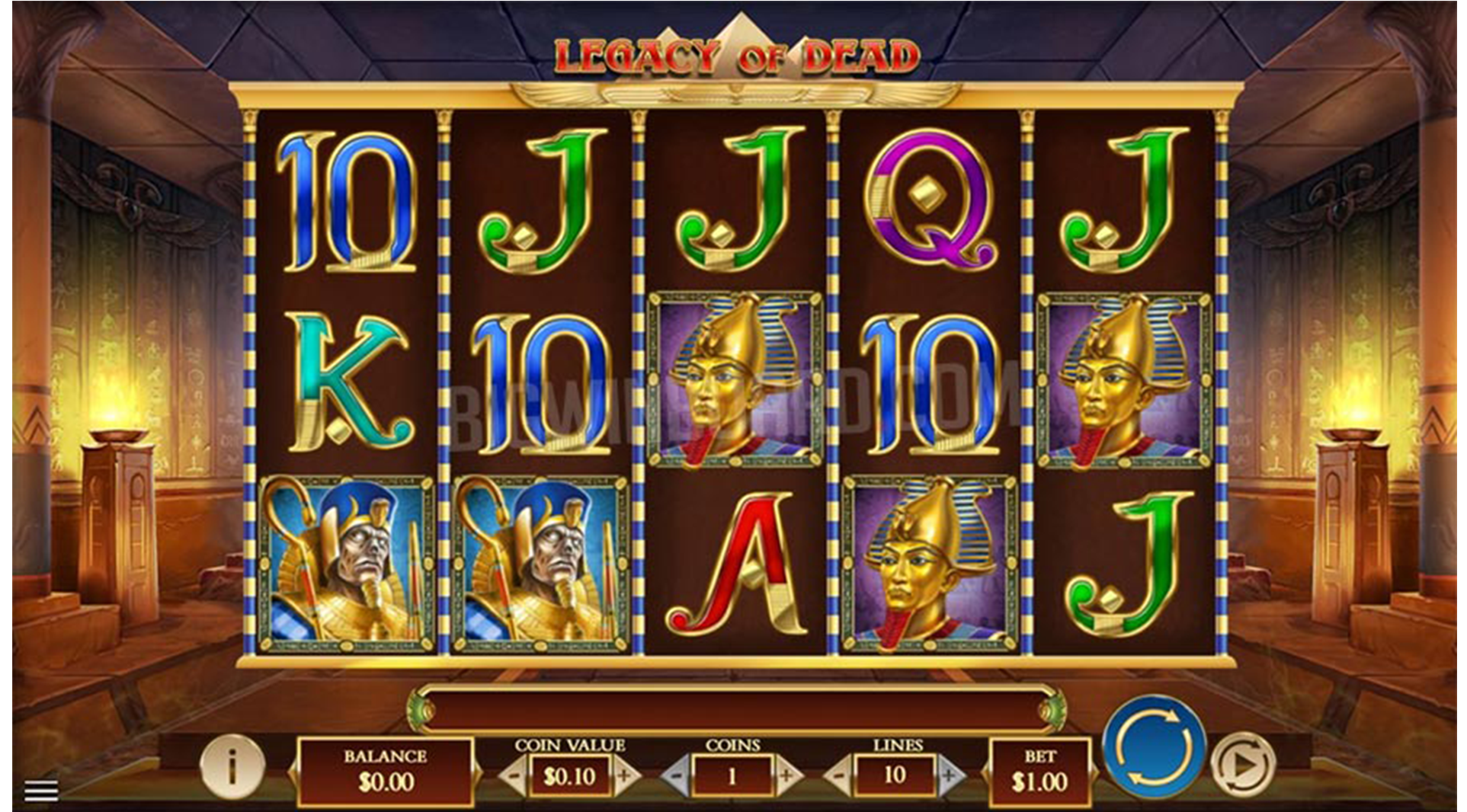 In terms of payouts, the royals are also divided into two groups. K and A comes into the high paying group and they can give you 120 times the stake. 10, J, and Queen offer 80 times the stake.

As for the wilds and the scatters, the Golden Tomb plays the role of both.

The bonus features found in Legacy of Dead games are very similar to the other games from the Book series.

Then, there is the card gamble bonus round. It’s an option whether you want to play it or not. You can choose between the colours of the cards or the suits. If you get the colour right, you’ll be a 2x payout while the correct suit will get you a 4x payout.