Deal or No Deal Slingo – A Game Show with a Twist

Deal or No Deal Slingo is a game that combines the excitement of the hit reality game show “Deal or No Deal” with the speed of a slot reel and the marking-off-boxes fun of bingo. Intrigued? OJO certainly is! It’s not every day you get to enjoy three different types of games in one awesome mashup!

Slingo online casino games are often ideal to play on any old day, but especially on those days when you just can’t decide between playing slots or bingo. That’s because they give you the best of both worlds. You play on a board that looks like a bingo card and mark off any matching numbers that result after a spin on a set of slot reels. As for the Deal or No Deal Slingo game, it includes all that plus the best bits of the game show, like the Banker’s Offer and the chance at hitting a exciting win!

What’s the Deal with This Slingo Game?

With all the talk of slots and bingo, you might be wondering if this is a complex game to play. Nope! Even though Slingo Deal or no Deal isn’t like typical online slots, it’s just as easy to play.

The Deal or No Deal Slingo slot/bingo game is presented on a 5x5 grid. Just like the game show, the grid is filled with numbered boxes (“briefcases”). Each box contains a prize that could match any of the values that are listed on either side of the grid. The objective is to pick boxes to eliminate prizes and work your way toward the Banker. By completing Slingos (matching five numbers on one of 12 payilnes) this helps you to boost the value of the remaining prizes in the game. 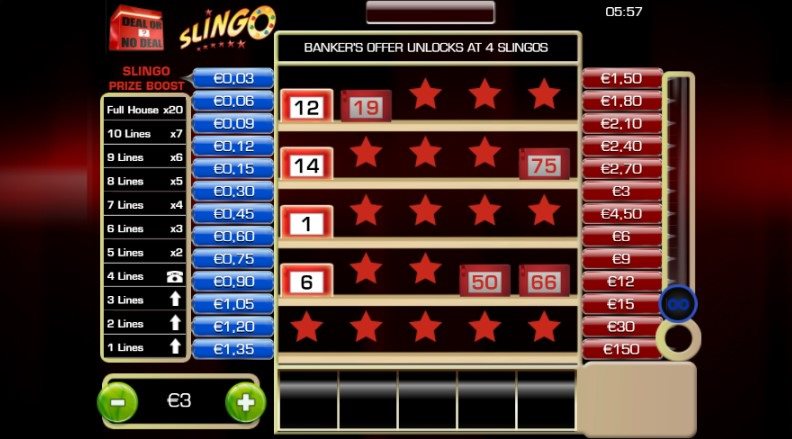 Get the Banker’s Offer & Other Bonus Features

First things first, amigo. If you’re gonna play with OJO don’t forget that with your very first deposit you can get 50 Free Spins wager-free!

Whatever you decide, once you’re ready to play, set your stake and pick one of the boxes from the 26 that are available in the grid. The box you pick will be set aside, while the remaining 25 will stay put. To start the game, hit the “SPIN” button. Each game lasts for 10 spins. Each of your first 10 spins places 5 numbers/symbols in the reel that is positioned below the 5x5 grid. If any of the numbered boxes in the columns above match the number displayed below it on the reel, the box will be open and its prize value will be removed from the game. But watch out for the sneaky devil symbol! If it shows up in the reels, this bad boy will block symbols and stop you from matching numbers.

After your initial 10 spins are complete, if you accumulated any Deal or No Deal Slingo Free Spins, you can keep on playing. The other option if you don’t have free spins is to buy extra spins. The cost of those is shown on the spin button for each Individual spin.

If you manage to get five opened boxes next to each other (horizontally, vertically or diagonally) this creates a Slingo (yup, just like Bingo!). Each Slingo you get will move you up a place on the prize multiplier bar located to the left of the grid. If you manage to get 4 Slingos, you’ll unlock the Banker’s Offer and will have three options:

If you choose to keep playing, from this point forward, the Banker will continue to make an offer based on the prize values remaining in the game, after each spin. However, if you’re the lucky OJOer who Slingos the whole board (a Full House), you’ll get up to a 20x multiplier.

Free spins is a Deal or No Deal Slingo slot feature. You’ll get them when you land a free spins symbol. One symbol awards one free spin. Any spins you collect will come into play only once the game’s 10 main spins are finished.

Both Joker symbols act something like how Wilds do in a standard slot game. If the Joker lands on the reels (look for the clown in the red hat), you’ll be able to mark off any box in the column above him. Super Joker, on the other hand (keep your eyes peeled for a clown in a green suit), lets you mark off any one box of your choosing on the grid. These helpful jokers can help you create Slingos faster. 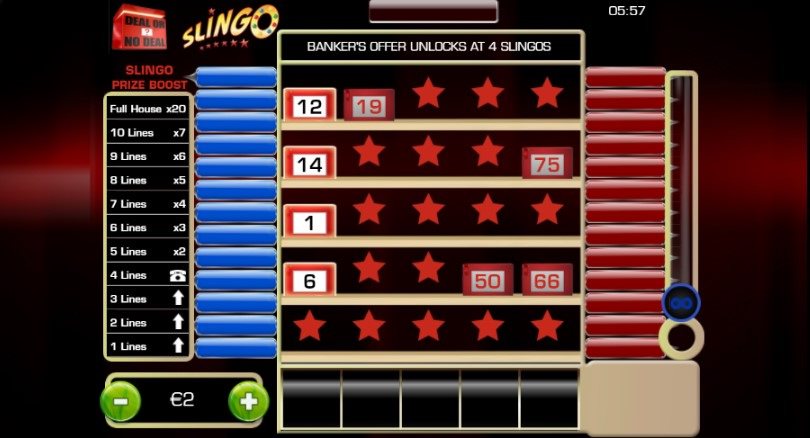 Time to Make a Deal

There’s nothing quite like Slingo and OJO says the Deal or No Deal Slingo machine is one of the most exciting. You can try it today on your desktop, mobile or tablet.

Ready to make or reject a deal? Play Deal or No Deal Slingo and see if you can get the Banker’s Offer.