The World of Crabs in Crabbin’ Crazy Slot

You may not find Mr. Krabs but you’ll find the next best thing in the Crabbin’ Crazy slot!

Since the days of SpongeBob SquarePants, OJO has had a profound love for the underwater world. He’s always on the lookout to prove that SpongeBob really exists. Can you imagine his excitement when he found out about the Crabbin’ Crazy slot?

Although the crabs in the game do not resemble Mr. Krabs, they’re the next best thing for OJO. So, let’s take a look at what he has to say about this video slot from iSoftBet.

iSoftBet has been in the iGaming industry for quite some time now. It has lots of amazing online slots in circulation but the company doesn’t like to make too much noise. It’s one of the reasons not many players in Canada are familiar with its work.

Crabbin’ Crazy slot is a prime example of what this provider can achieve. It’s a 5-reel video slot with 3-reel positions. With this standard 5x3 layout, the developer has managed to include lots of bonus offers in the game.

The game title boasts 96% RTP and a high volatility rating. High volatility means the hit rate of the game is quite low. But when you finally make a hit, you stand to win a substantial amount.

There are 25 fixed paylines in the Crabbin’ Crazy slot. In terms of bet value, you can only set the coin value in your currency, which is C$ for OJO. The bet value will be 25 times the coin value, 1 coin for every payline. 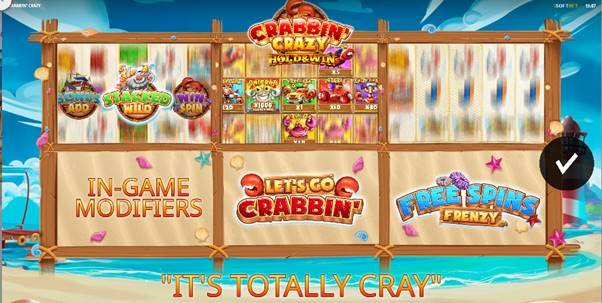 Crabbin’ Crazy slot is one of those games from iSoftBet’s library that boasts mesmerizing graphics. The backdrop of the game seems right out of a high production value cartoon. The colours are very vibrant. OJO likes vibrant colours a lot because it helps lift his spirits.

You can see the ocean, the clouds, the pier, and the lighthouse in the background. There’s even a tiny hill in the distance. In the foreground, you have a wooden frame that holds the symbols.

Only the reels are separated with translucent backgrounds. There’s no separation between the spots of the grid. It makes the spins more integral and soothing to the eyes.

There are subtle uses of animation both in the background and the foreground so there’s not a dull moment in the game. As for the sound design in Crabbin’ Crazy slot, you can expect an upbeat tone that goes very well with the theme of the game.

iSoftBet believes in simplicity. And that’s why there are only 8 main symbols in the game. Needless to say, all of these symbols are based on the theme of the game. So, you’ll mostly see fishing equipment and oceanic creatures.

The 2nd highest payout symbol is the life raft, and it pays 12x for 5 on a payline. If you get 4 of them, you may win 6x and for 3 of them, your winnings are capped at 1x of your bet.

The highest paying symbol in the game is the fisherman wild who can give 20x your bet for 5 on a payline. It also replaces all symbols except for crabs and bonus symbols.

Speaking of the bonus, it’s the scatter symbol in the game. It’s a ship that has “BONUS” written on it. It only appears on reels 1, 3, and 5. Landing 3 of these will trigger the Free Spins Frenzy round.

Last but not least, you have the crabs symbols. There are 7 different types of crabs. Landing 5 at the same time will trigger the Let’s Go Crabbing bonus feature. 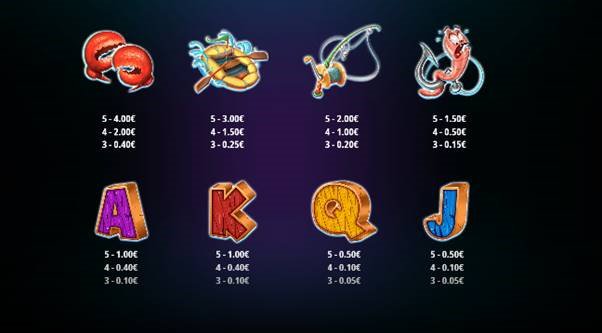 From the previous section, you should get a basic idea of the bonus rounds in the game. Let’s start with the Free Spins Frenzy. It’s triggered when you land 3 bonus symbols. During this round, all 5 reels may sync up on any spin to generate a massive payout. This bonus round cannot be retriggered.

Then, we have Let’s Go Crabbing. 5 crab symbols trigger 3 respins. Every time you land an additional crab, the respins count is reset. The crabs will land with a multiplier value attached to them. If the fisherman wild and the crabs are on the reels at the same time, the fisherman will catch the multipliers to pay out up to C$250,000.

If you’ve played other iSoftBet titles like Lanterns and Lions slot, you may already know how simple yet fantastic the gambling experience is with this developer. So, sign up right now at OJO to explore a new world of slot games for you.