Hold your horses in the Lanterns & Lions slot because the winnings are about to go off the charts!

Whenever there is iSoftBet involved in the development process of online slots, you can expect unique gameplay and even more unique bonus features. The same goes for the Lanterns & Lions slot at OJO. OJO has been spending quite a lot of time on this video slot and he’s here to share his thoughts with you.

iSoftBet is a big advocate of innovation. In most of the games it has developed over the years, there’s at least one unique feature. For Lanterns & Lions slot, it’s the Hold & Win feature. Although Hold & Win is not a proprietary feature of this developer, very few use it better.

The video slot in question today is a 5-reel 3-row game with 96% RTP. It seems to be the sweet spot for all iSoftBet titles. This is a medium volatility game which means you’ll generate substantial payouts in a moderate frequency.

The maximum win in the Lanterns & Lions slot is 8,888x of your bet. OJO knows it sounds a bit abstract. But he’ll explain how it happens in the bonus features section. In Canada, you can set your bets between C$0.25 and C$25.

So, the coin values range between C$0.01 and C$1 considering the 25 fixed paylines in the game. Every time you win, the game will show you which payline it was. 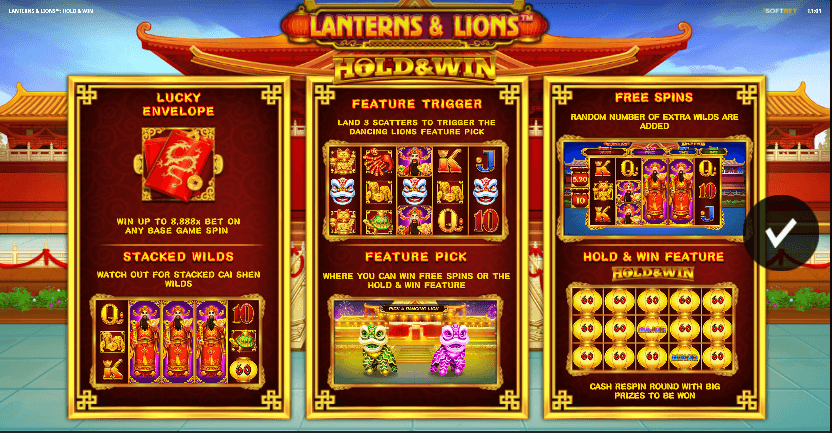 Every time OJO comes across an iSoftBet game, he knows he’s in for a tremendous graphical journey. The same is true for Lanterns & Lions slot. The game has a very vibrant interface loaded with elements like, you guessed it, lions and lanterns.

These are not your everyday lanterns or zoo lions. Rather, these are inspired by the Chinese culture and the Cai Shen era. On the backdrop of the game, you’ll notice Chinese temples with floating lanterns.

The audio is very much inspired by ancient Chinese culture as well. When you’re in the game spinning your reels, the audio will submerge you in ultimate immersion.

The symbols in the Lanterns & Lions slot are all in-sync with the theme. The only problem is that they don’t pay very well. Two of the most important symbols are obviously the lion and the lantern. You also get many relics from the Chinese culture as symbols in the game.

The highest paying symbol in the game is the golden cat statue, Maneki-Neko. It pays only 6x your bet for 5 on a payline. Do you see what we mean by “symbols don’t pay very well”? for 4 on a payline, you can win 2x and for 3 on a payline, you may win 0.4x of your bet.

These take care of the high paying symbols in Lanterns & Lions slot. The rest of them are royals where only the K pays differently. You may win 3x, 0.8x, and 0.2x for 5, 4, and 3 on a payline respectively.

Keep in mind that you can win more than one payline for a single spin. So, if you can’t figure out which payline it is, pay attention to the section on the screen where your payouts are displayed.

The most important symbols in the game are the lion scatter, the lantern scatter, and the Cai Shen wild. The wild can expand to take over the entire reels!

OJO already told you how iSoftBet focuses on bonuses a lot. In the Lanterns & Lions slot, the 3 bonuses are the Lucky Envelope, the Dancing Lions Feature Pick, the Hold & Win feature, and the Free Spins round.

Hold & Win slots are gradually making their way up into the top list of Canadian players. Take the Rhino Hold and Win from Microgaming for example! If you think you dig the game mechanics, you should give them a try at OJO.