The valley is dark and full of terror. But you’ve nothing to worry about because OJO is right there with you.

The Valley of Fortunes slot surely breaks many laws of traditional online slots. If you knew OJO, you’d know that he’s fascinated with providers who like to experience. As a result, this video slot has become one of his favourite pastimes in recent times.

Today, he managed to take some time out and tell you all about the Valle of Fortunes slot.

The provider of this game is High5Games. There’s a good chance that you haven’t heard the name before. It’s not necessarily a new brand but it's certainly underappreciated. Like most of its games, the Valley of Fortunes slot has some unique characteristics.

First of all, it doesn’t have any paylines. Now, not having fixed paylines has become quite normal in this Canadian online casino. It’s primarily due to the rise of Clusterpays and Megaways mechanics. Interestingly, this video slot doesn’t follow either of these mechanics.

So, most of the time, your 5x3 layout on the screen will be empty. Oh! Did OJO forget to mention it’s a 5-reel slot with 3 reels? At first glance, there’s no reason for players to think any differently about this game.

As you start playing, you’ll start to notice the discrepancies. One of them would be the symbols. There are only 3 and they look pretty much the same. Except for the colour, of course. These 3 symbols are capable of generating all the payouts you need.

The bet values for this game vary from casino to casino. But that’s something you shouldn’t worry about. OJO will allow you to place between C$0.2 and C$18.75. So, you can win up to C$195,000 even without any jackpot features! 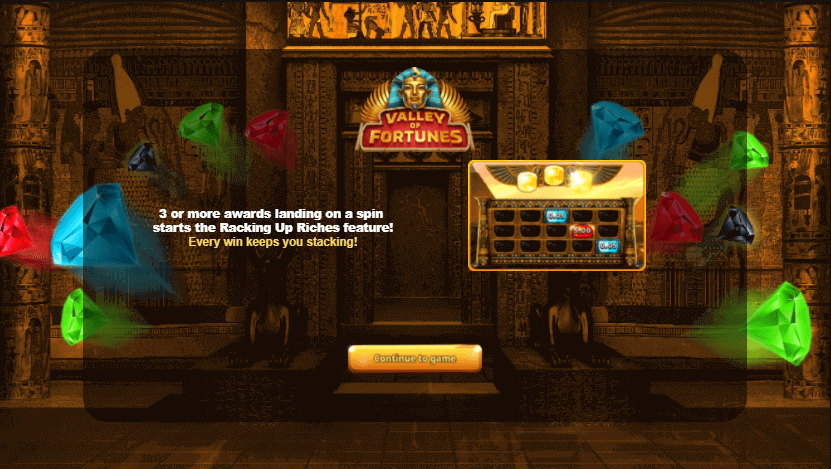 The game follows an ancient Egyptian theme. It’s not surprising at all because this theme has been popular for as long as we can remember. Take The Book of Dead slot for example. Pretty much every casino player knows about the Egyptian adventures of Rich Wilde.

Valley of Fortunes slot is set on a bright backdrop with pyramids and the icon red sky of Egypt. You’ll also see ancient infrastructure on the ground that complements the backdrop very well. On top of the grid, there is a massive wing that holds three spots. As you land a winning combination, the wing shakes and lights up.

The main action of the game takes place in the grids. It’s a 5x3 layout with intricately designed pillars on both sides. You’ll notice Egyptian markings if you look closely. The positions on the reels are also intricately designed to match the entire theme of the game. It’s quite rare because developers don’t bother too much about the design inside the reels.

As for the audio, there’s a soothing tone running in the background. You’ll hear the symbols falling with every spin. The characteristics of the sound design change dramatically as you land a winning combination.

Remember OJO told you there are only three symbols? And there are paylines? So, what can you do with this information?

Basically, this game follows its own mechanics where you have to wait for the symbols to play out on their own. Although that’s pretty much the case for every online slot out there, the Valley of Fortunes slot is a little different. Because you’ll only see the symbols when you generate a payout. Other times, the reels will be empty.

The three symbols in the game are the Blue Jewel, Green Jewel, and the Red Jewel. The red one is the most valuable one while the blue one pays the least. The symbols have values written on them directly. That’s your base payout.

Sometimes, the symbols will come with a currency symbol attached to them. For Canada, it’s obviously going to be C$. Essentially, the currency symbol turns the regular ones into a scatter. 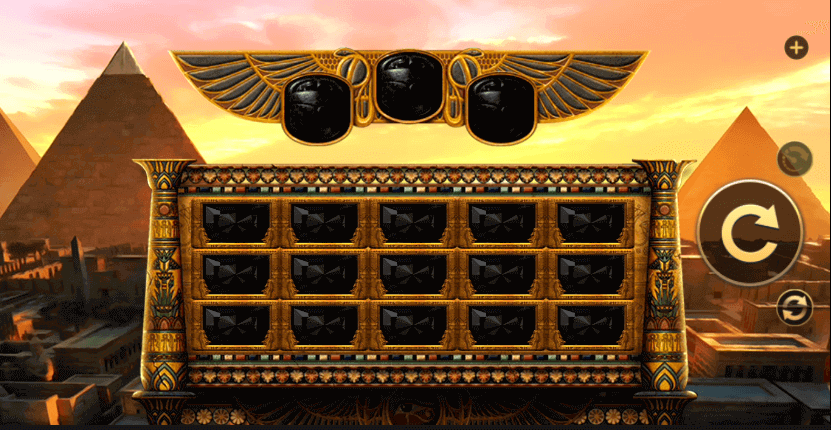 Interestingly, the game has a bonus feature called Racking Up Riches. It’s interesting because, from the outside, the game doesn’t look like it can have a bonus round. It’s all that better because OJO and you can get something more out of Valley of Fortunes slots.

The bonus round is triggered when you have 3 or more of the symbols anywhere on the reels. That’s the only condition, you need to symbols at once. No, it doesn’t trigger any free spins rounds or respin feature, the ones you’re familiar with.

Instead, the Racking Up Riches feature takes you inside the pyramid, in a dark chamber. There’s an additional gold symbol in this round that can result in up to a 10x multiplier. Unlike the base game, the reels won’t be reset with every spin. The symbols will keep stacking until the grid is full.

Egypt has been a gold mine of inspiration for slot developers. For some reason, the pyramids, the Anubis, and the desert comes back over and over in OJO’s life. He certainly enjoys it. If you do too, then you should definitely give the Valley of Fortunes slot a try.