Get your supplies because you’re going on the modern rendition of an Adventure from The Goonies.

“The Goonies never say die!” Does that ring any bell? 1985’s classic Spielberg movie “The Goonies” has managed to become a cult over the years and OJO is a big fan. So, it’s only normal that you’re able to play The Goonies slot at PlayOJO.

This game is very heavily influenced by the movie and OJO couldn’t be happier about this. Because this is what’s supposed to happen with video slots. For bringing the slot version of this cult, we have to thank Blueprint Gaming, the developer of the title.

The Goonies slot is a 5-reel video slot with 3 reels. Kind of the perfect layout for a video slot, don’t you think? This 5x3 layout results in 20 paylines. If you’re not sure what a payline is, it’s the combination the symbols must land for a win.

Blueprint Gaming has declared the RTP of this game as 96% which is very good no matter how you look at it. Just like most of the modern online slots, this game also has an Autoplay feature where you can schedule up to 100 of the spins in advance. 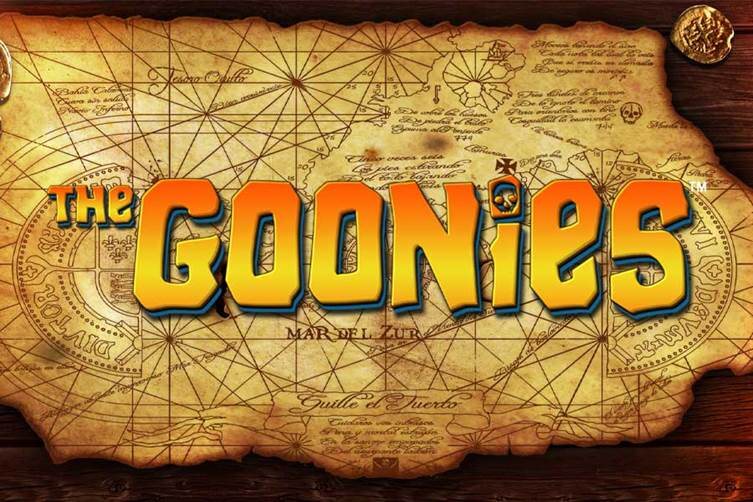 The theme is just as wholesome as you would expect. OJO got very much nostalgic when he saw the intro animation. Chunk comes out screaming to greet you as you open the game. The entire layout is filled with The Goonies slot memorabilia.

The sound is also in-line with the original Goonies theme. It’s a funky beat that you can jam to while you play.

Everything that comes to mind when you think of The Goonies slot is present in the game as a symbol. You have the loot chest, the wooden ship, the skeleton, the scale, super-stacked wilds, and the bonus scatter.

Both the loot chest and the wooden ship are the highest paying symbols. They both pay 300 coins if you land 5 of them on a payline. For 4, you get 80 coins, and for 3, you get 20 coins.

Then, you have the royal symbols where A and K pay more than the J and the Q. All of them pay between 50 and 100 coins for 5 on a payline.

The super-stacked wild is the ultimate symbol of the game because it can pay 500 coins if you land 5 on the payline.

You already know about the scatter and it can result in the unique One-Eyed Willy’s bonus which is the highlight of the game. 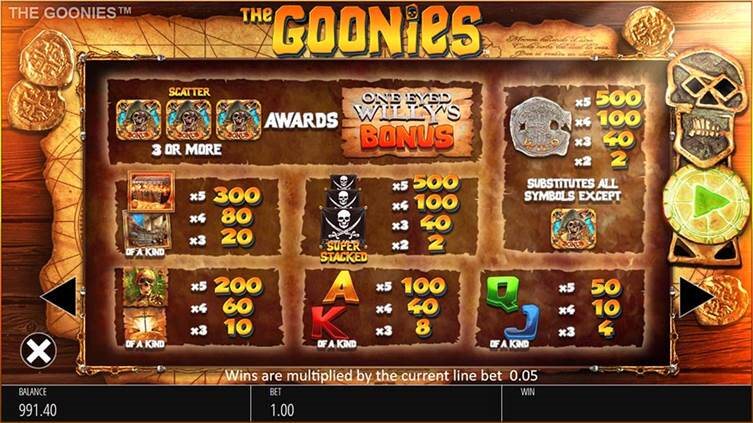 One-Eyed Willy’s Riches is the biggest attraction of the game. It’s a random bonus that comes with 6-reel modifiers during any spin.

One-Eyed Willy’s treasure bonus follows closely. This can be triggered randomly during the base game, and it’ll take you to a separate screen where you can play six types of bonus rounds. You also get a wheel of chance to see what fate has planned for you.

There is a total of 5 bonus rounds in this game!

• Classic visuals and sound design inspired from the movie

If you’ve watched the movie and liked it, this is a must-play slot game for you. OJO can’t seem to get over the fact that he can remember his childhood heroes whenever he wants. If you feel the same, it’s time to jump into the game.