Starburst Slot – Expand Your Wild Side

Starburst is a thrilling online slot that welcomes players to experience a galaxy of fun and the chance to win a 50,000 coins top prize! Naturally, it had to be included in the PlayOJO universe. From its vibrant gem symbols and its futuristic 1980s-like space tunes to its Win Both Ways and Expanding Wilds features, the Starburst slot game is a blast.

After just a few spins of the Starburst slot machine, it’s a no-brainer why this is one of the most popular online slots around and one of award-winning NetEnt’s finest creations. Heck! Even taking the Starburst slot demo for a spin is thrilling, and you can try it for free any time you want courtesy of your pal OJO.

Of course, when you are ready to play for real money, be sure to treat yourself to a welcome Kicker after you sign up and get 50 Free Spins with your first deposit. In true OJO fashion, any wins from those spins are wager-free! What’s more, with OJOplus, you get money back on every bet – win or lose – including when you play the Starburst online slot.

One of the reasons the NetEnt Starburst slot is so remarkable is that the game was first released in 2012 and has remained a fan-favourite over the years among both newcomers to the iGaming scene and online slots enthusiasts alike.

What makes this particularly interesting, amigo, is that Starburst is actually a very simple game with arcade-like effects and lacks the animated sequences and various bonus games that tend to make other NetEnt titles a huge success. In fact, when it was first launched, Starburst received a lukewarm welcome from reviewers, with no one expecting it to be the smash hit that it has become.

Today, it’s one of the most popular games enjoyed by Canadian OJOers. Whether you like playing at home or on the go, there is both an online video slot (desktop) and NetEnt Touch (mobile) version of Starburst available, with gameplay being identical for both platforms. 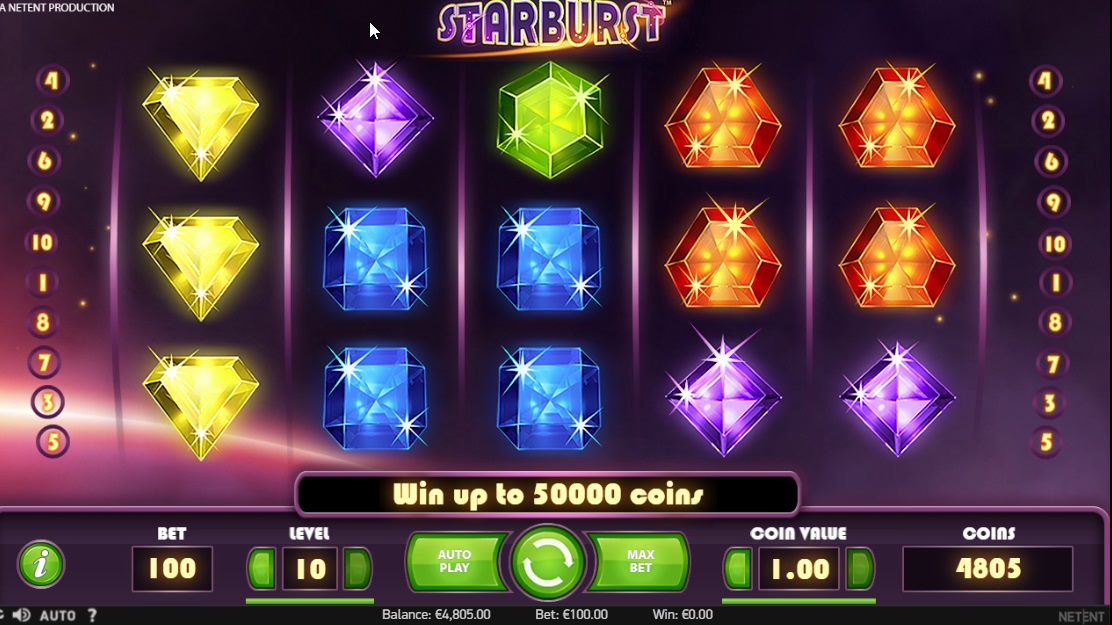 When you’re ready to play in this game’s galaxy, you’ll find yourself looking at a 5-reel, 3-row and 10-payline slot. Although set in space, the symbols on the reels have little to do with interstellar travel. Instead, reels are covered in jewel symbols (coz, why not?), including the purple diamond, the blue topaz, the orange citrine, the green emerald and the yellow diamond. Other symbols (non-gemstone related) are a red 7, a gold BAR and the multicoloured Starburst Wild.

No matter if you play for real or for fun, you can stake as low as $0.01 or as high as $100. There are also 10 different bet levels to provide you with more betting options. Starburst is a low to medium volatility game and the Starburst slot RTP is 96.09%. All in all, it’s an ideal video slot for all types of OJOers.

When it comes to Starburst slot ca features, it’s all about the less is more factor. We feel that it’s the sheer simplicity of the features that makes the game a true star and a pleasure to play.

First off, winning combinations in this game are not stuck in the same ol’ rut! You can win from left-to-right and from right-to-left. That’s right, Canuck! The Starburst slot doesn’t abide by the standard left-to-right-only win rules. Equipped with the Win Both Ways mechanic, you can form winning combinations matching 3, 4 or 5 symbols on adjacent reels that start on reel 1 or reel 5. In other words, it’s double the chance at scoring a win!

The feature that really sends this game into high orbit is its Starburst Wilds. The multicoloured wild star can appear on reels 2, 3, and 4, will substitute for all symbols, and will expand to cover the entire reel, triggering a re-spin (which is pretty much a free spin). During the re-spin, the Starburst Wilds lock in place.

Even better, this feature can be retriggered if more wilds appear on other reels, giving you up to a maximum of 3 Starburst free spins and the chance for some thrilling wins! 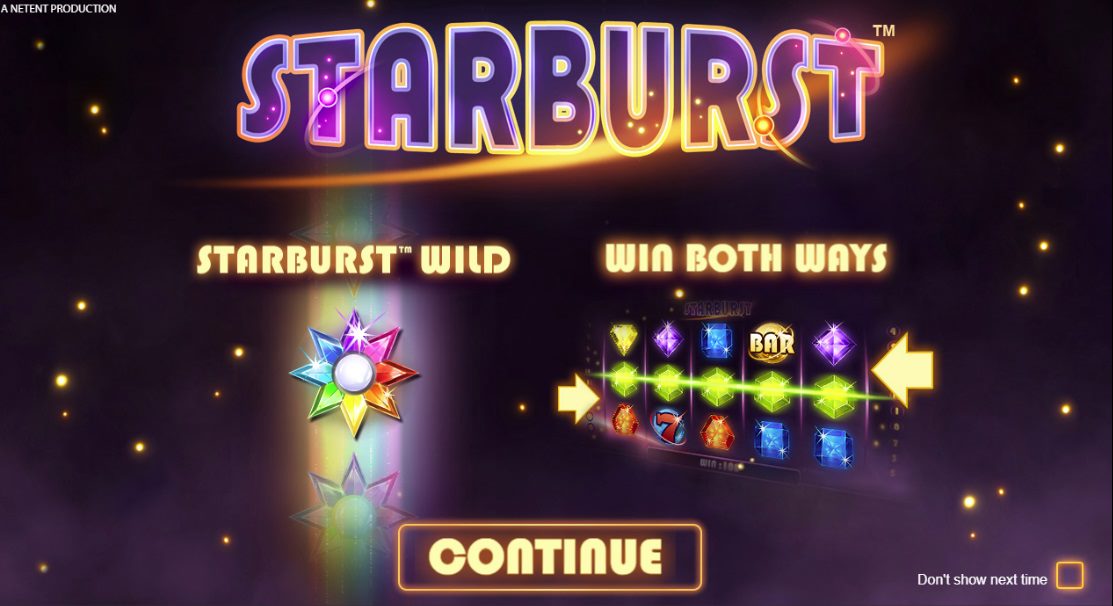 We’ve seen a lot of online casino games and it’s easy to understand why this one has stood the test of time. There’s nothing quite like this slot. Starburst makes it clear that you don’t need to have massive jackpots or dozens of features to shine. It’s just got the right spark.

Want to see what all the fuss is about? Play Starburst online slot today!