Rise with Rise of Olympus slot in Canada 2021

Rise of Olympus Slot at OJO: The Best Greek-themed slot?

Let us spill the beans on OJO today. He likes high volatility slots more than anything else! Isn’t that crazy? If you’re anything like him, then you’re going to love what we have in store for you today.

That’s right, we’re talking about the Rise of Olympus slot by Play’n Go! This game breaks so many of the traditional rules we’re used to finding in video slots that OJO fell in love with it immediately.

Play’n Go is always trying to come up with something new. It’s one of the USPs of the company. Most developers stick to the 5x3 layout for their video slots. But not Play’n Go. Rise of Olympus breaks the shackles and presents you with a 5x5 grid! And it eliminated the concept of paylines completely! 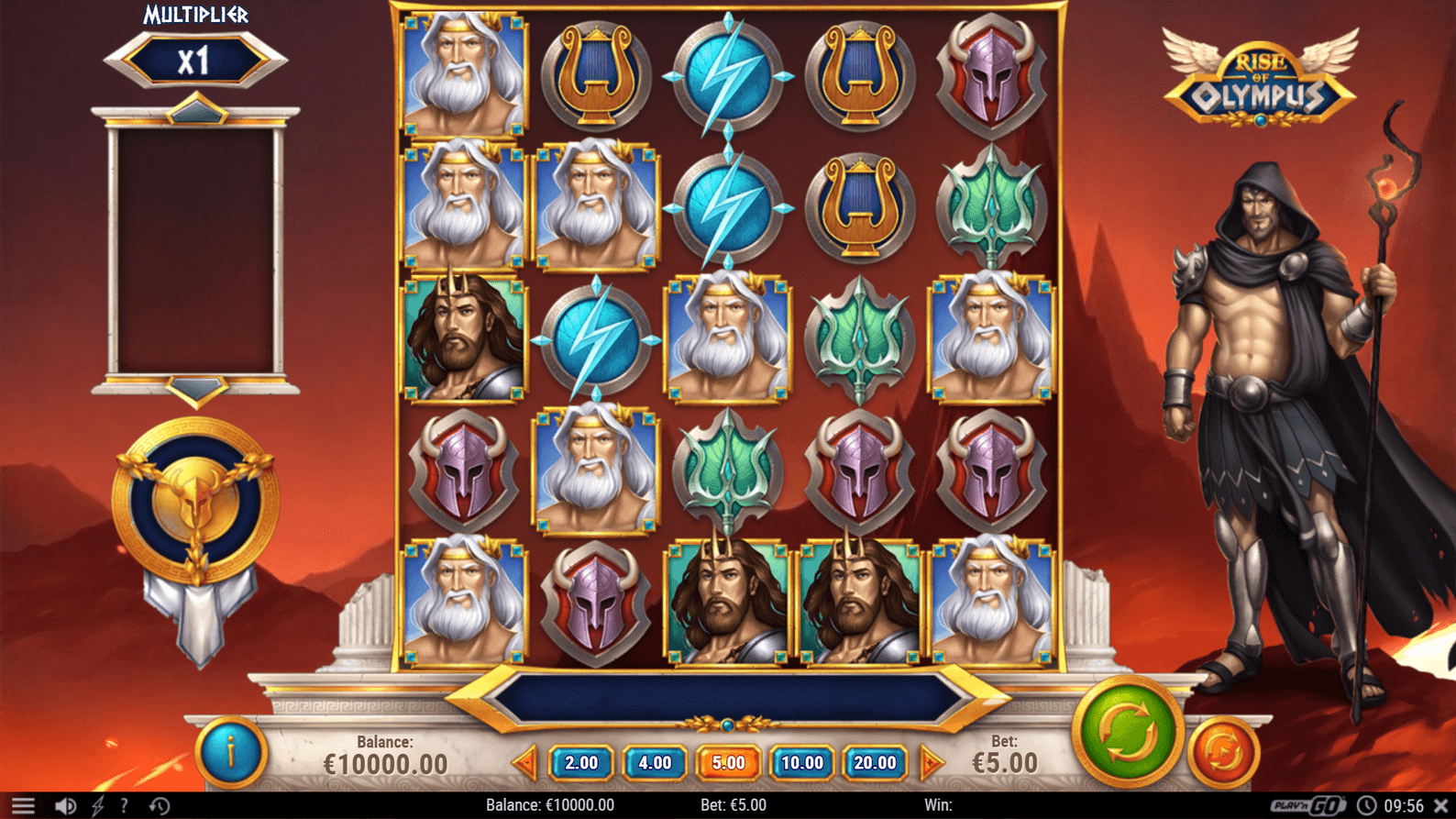 This innovative layout also resulted in variable RTP ranges. For this game, it ranges between 84.50% to 96.51%. It’s a high volatility slot.

Although we’re saying it eliminated the paylines, it’s not entirely true. There is only 1 payline in the game. And to activate it, you need to land 3 similar symbols in a row. The reason we said there are no paylines is that you can’t see it as a player.

The game is set on Mount Olympus. It’s the only logical showground for a game named Rise of Olympus. As Mount Olympus is the home of the Greek gods, the theme of the game features them quite heavily.

The backdrop shows miles of cloud as you would see from the top of the mountain. It changes to the broken hall of Zeus with Hades by your side. After each spin, Hades will cheer you with a fiery skull.

Do we really need to explain how good the audio is one this game? Play’n Go needs no introduction when it comes to immersive audio at this Canadian online casino. You get the hear the excellence as soon as you get into the game.

It’s obvious that the symbols of the game will mostly be Greek gods as that’s what the game is based on. You have Zeus, Poseidon, and Hades, as high paying symbols. The harp, the helmet, the lightning bolt, and the trident come into the same category of the low value symbols.

Zeus, Poseidon, and Hades all pay 10 times the stake if landed 5 times in a row. The harp and the helmet pay 3x while the trident and the lightning bolt pay 2x. 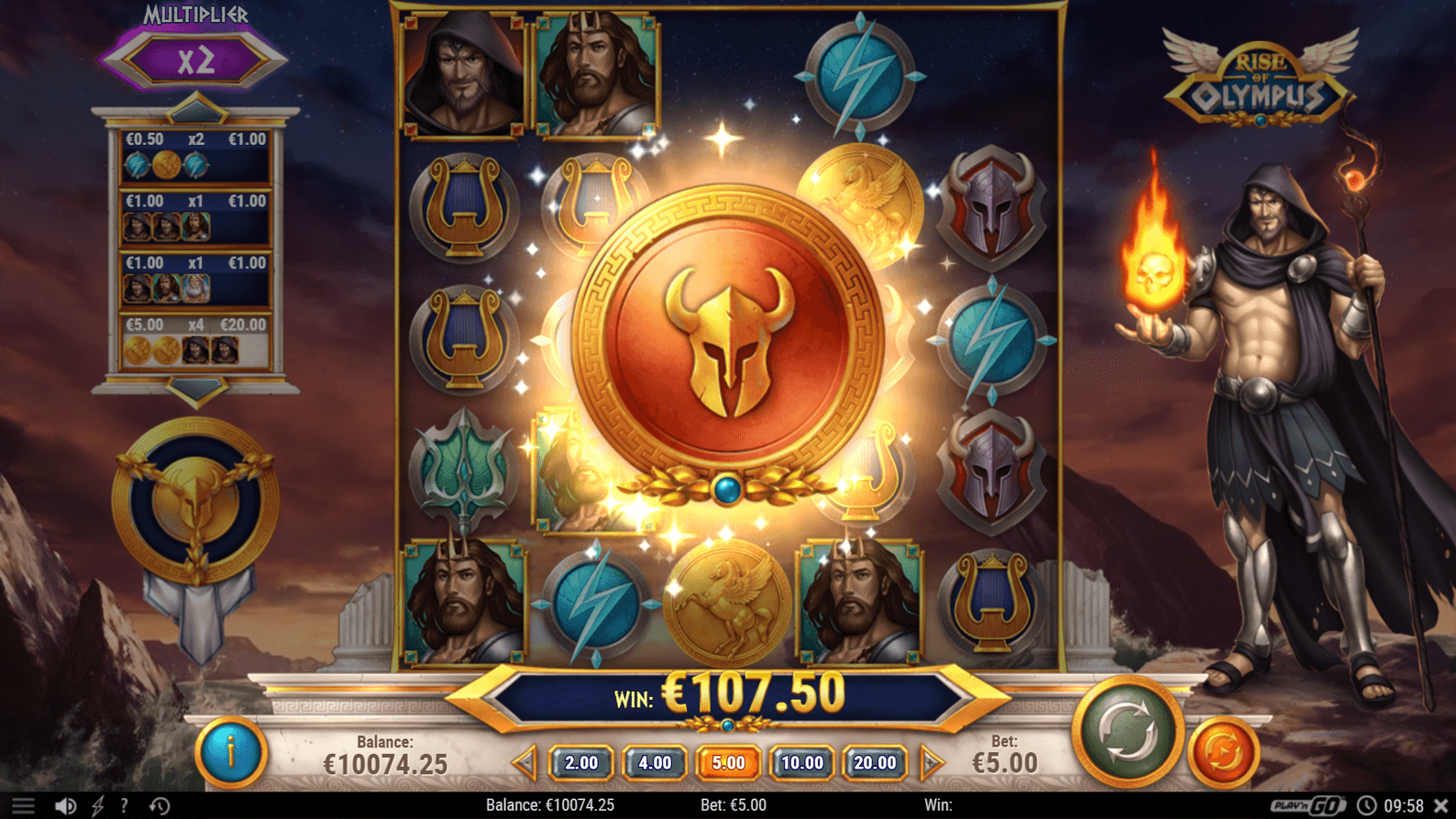 The wild symbol for the Rise of Olympus slot is the Pegasus Gold Coin. If you land it 5 times in a row, you’ll not only form a winning payline but also win 50x your stake!

Part of an online casino’s fun lies in the bonus features. And that’s why OJO always goes deep into finding them for you. On the Rise of Olympus slot, you can enjoy the Wrath of Olympus features.

It’s triggered when the meter on your game screen is full. Initially, you’ll receive 1 free spin. As soon as you play it, the Hand of God feature will take precedence and it’ll look like the hell has come loose!

Wilds will come down to destroy symbols off the grid. If you’re lucky enough to destroy all of the symbols from the grid, you can enter the free spins round. On this round, you get to choose between the gods. Each of them pays a different number of spins and a different multiplier. The multiplier can range between 1x and 20x!

Rise of Olympus slot is a fantastic entry point for you get to into mythological casino games. OJO is here to assist you in the process. When OJO is here, nothing to fear.