The Pixies of the Forest are back in this sequel from IGT Gaming, and this is a magical forest adventure you do not want to miss! There is a lot to unpack here, and you’ll see a lot of improvements from the original when you play this online slot at OJO.

There are so many wins to win playing this online slot in Canada, with Tumbling Reels, Free Spin Bonuses, multipliers, and random Pixie Queens to help you win big. There are also jackpots if that wasn’t enough, so you can’t complain that this game is boring! And the cherry on top is that you’ll get 50 Free Spins when you sign up at PlayOJO and make your first deposit! OJO doesn’t have any wagering requirements on bonuses, and they also have lots of online casino games like roulette, blackjack, and baccarat! 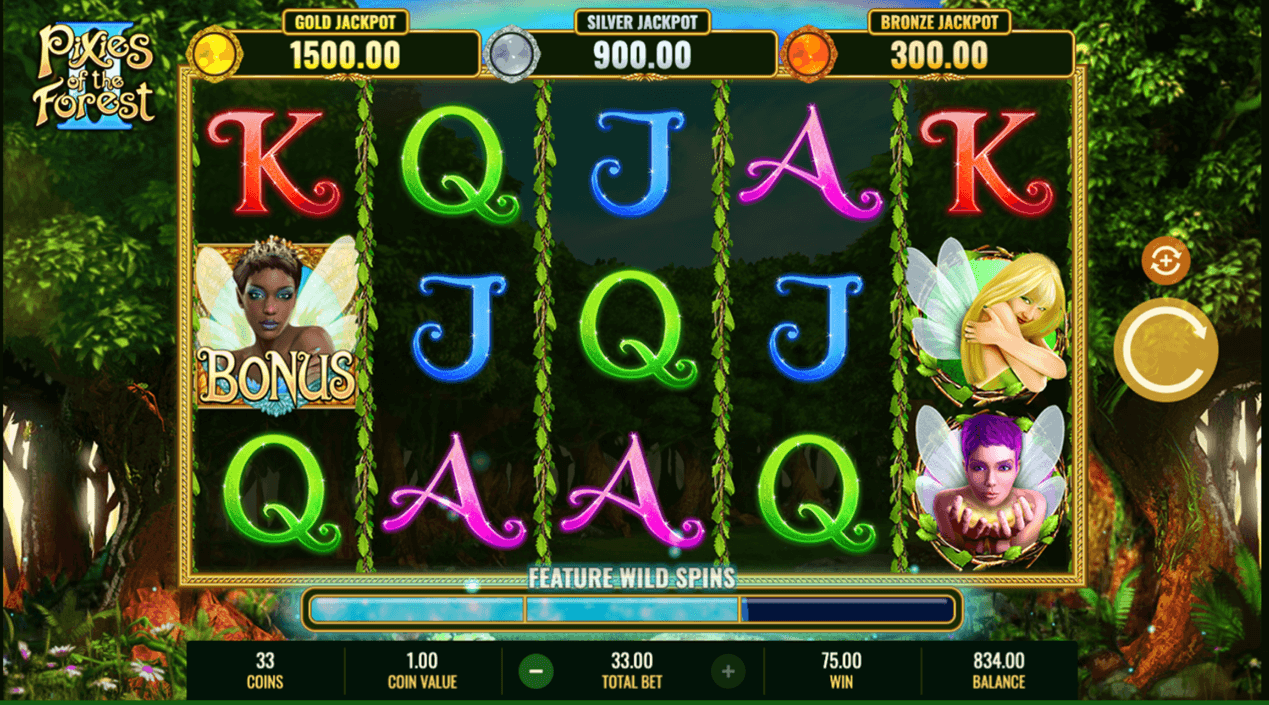 How To Play Pixies of the Forest 2 Online Slot

If you have played the original Pixies of the Forest at OJO, most of the gameplay is the same. There are five reels by three rows, which is pretty standard for modern online slots. But the main difference is that this game features Tumbling Reels (also known as Cascading Reels or Avalanche Reels), which means that after every win, the winning symbols will disappear, and new symbols will fall from the top to replace them. This makes it so that you can connect on multiple consecutive wins off of each spin, which keeps the game exciting and means you never know what could happen each time you spin the reels!

There are also an amazing 99 fixed paylines in this game, way higher than most online slots in Canada. This gives you so many ways to win on each spin!

The low end symbols are the cards Jack, Queen, King, and Ace, with premium symbols of different pixies. There is a blonde and brunette pixie that can be worth up to 200 coins, a purple haired pixie up to 500 coins, and the top symbol is a Pixies of the Forest logo worth up to 1000 coins if you land five of a kind! Then there is a Wild symbol that can be substituted for all the aforementioned symbols and can appear on reels 2, 3 and 4 in the base game, and can also appear on reel 5 in the bonus rounds.

There is also a Bonus symbol and Jackpot symbol that can unlock different types of bonuses if you land three in a single spin. We will describe those in more detail under the Special Features section.

After each Tumbling win, there is a bar at the bottom that will fill up called the Spirit Meter, which increases by one for each connection on a spin. If it fills up all three bars, you will trigger the Feature Wilds spins where there are three different types of bonuses that can be triggered.

Pixies of the Forest 2 Slot Graphics and Effects

This is a big area where Pixies of the Forest 2 slot is much improved from its predecessor. The graphics are a lot crisper and the game looks fantastic. The original looks like a typical classic land-based slot with 2D graphics and not a whole lot of extras. In Pixies of the Forest 2, there are 3D characters, with much smoother reels and cascades on each win. There is also a much more detailed background of a forest compared to the original which is just blurry.

The sound effects play a magical fairy burst after each spin, and a satisfying clicking of the symbols as they land. It’s a nice, peaceful experience that brings you right to the mystical forest, and has you feeling like there are pixies floating all around you. 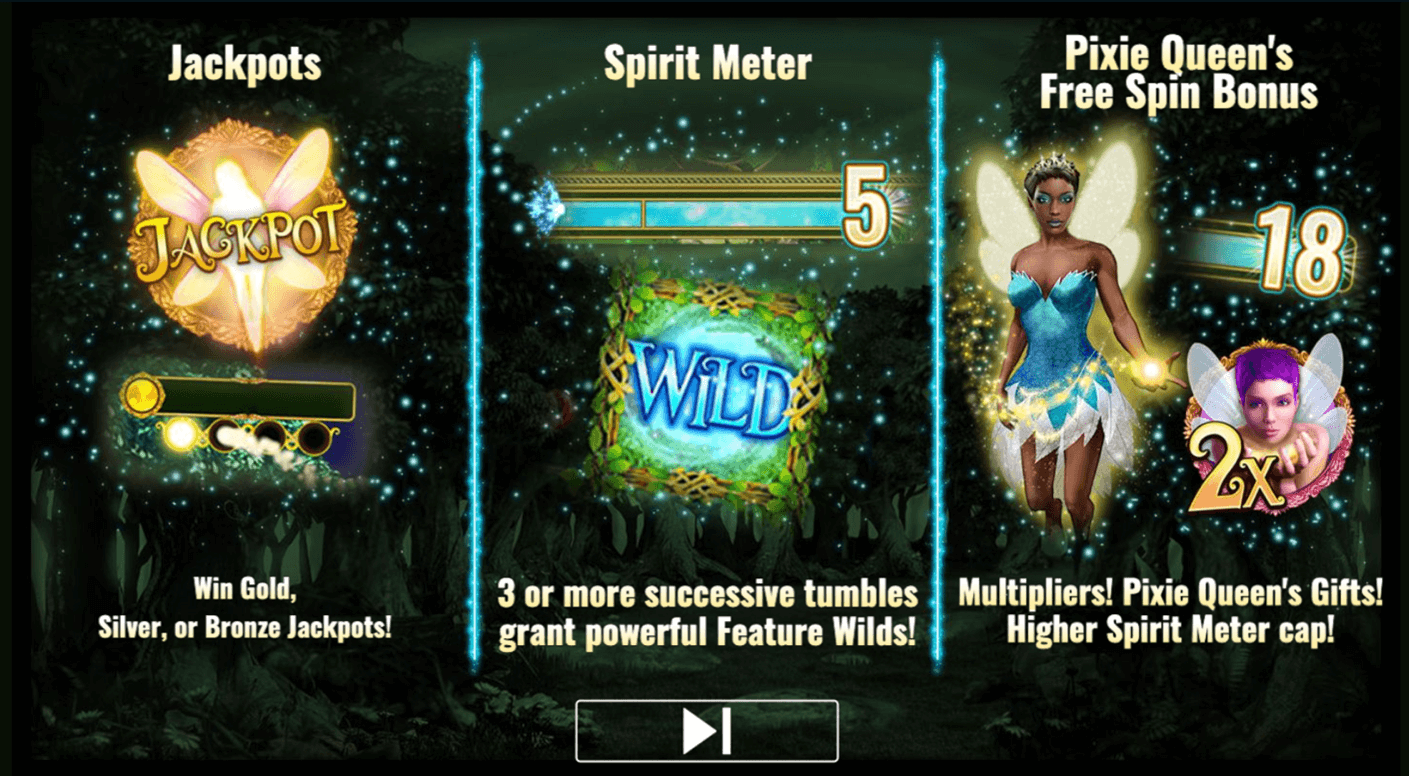 There are lots of extra features in Pixies of the Forest 2 slot, so let’s dive right in Amigo! As mentioned before, if you land between three to five wins on a single spin via the Tumbling Reels you will fill up the Spirit Meter and trigger one of three different Feature Wilds spins:

This round will be triggered if you land three of the Bonus symbols in the base game, or at the beginning of a Feature Wilds spin. To begin, click one of the Bonus pixies and you will be awarded between 5 and 11 Free Spins. In this Free Spin Bonus, a bunch of extra Wild symbols will be added to the reels, and any pixie that lands on reel 1 will have a 2x multiplier on it. This makes for some big wins to be had, my friend! The Pixie Queen will also fly around during the Free Spin Bonus and award extra prizes. This includes triggering a Feature Wilds spin, adding bars to the Spirit Meter, or just awarding you more free spins (up to 180)!

This round will be triggered if you land three of the Jackpot symbols in the base game, or at the beginning of a Feature Wilds spin. Once you get here, you are guaranteed to win one of the Jackpots listed at the top of the game! 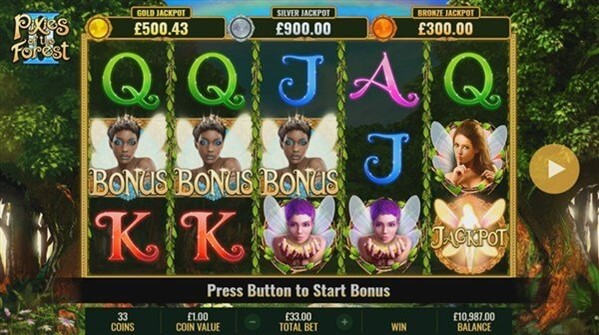 Pixies of the Forest 2 Slot Verdict

So, what do we think of this online slot at OJO, Amigo? It is definitely a fantastic adventure, and you will certainly want to give this game a try. The fact that there are 99 paylines in a 5x3 slot is already enough to spark your interest, and then you add on the incredible amount of bonuses, this game definitely stands out among other online slots.

Great graphics, simple controls, an autoplay feature, three different bonuses… the list of perks with Pixies of the Forest 2 goes on and on. And don’t forget, you get 50 Free Spins when you sign up at OJO and make your first deposit, plus there are no wagering requirements! So don’t wait, sign up today and you can win real money in real time at PlayOJO!