Ahoy Matey! We Pirates are plunderin’ booty and lookin’ for any gold we can get our hands on in Pirates’ Plenty online slot at OJO. With all the awesome different extra features in this game, there are so many different ways for you to win!

Pirates’ Plenty online slot by Red Tiger Gaming brings you the excitement of Pirates pillaging the open seas without having to leave your home in Canada. Free Spins, Treasure Reels, Wild monkeys that steal low paying symbols, the opportunities to win sunken treasure are endless, and all at your fingertips at PlayOJO! There are also a plethora of fun online casino games at OJO like online blackjack, roulette, baccarat, and more. So, let’s dive right in Amigo!

Pirates’ Plenty online slot starts with a standard five reels, three rows and 20 fixed paylines. There is a sixth reel on the side called the Treasure Reel that is covered up but can be unlocked by getting enough map symbols in the base game, allowing you to get combos up to six of a kind and making for some crazy wins.

The low paying symbols are gold coins with the four different card suites on them, hearts, diamonds, spades and clubs. The premium symbols are a bottle of rum, two pistols, a cannon, a Pirate’s hat, and the highest paying symbol of all is a skull and crossbones that can pay up to 20x you stake for five of a kind. If you manage to unlock the Treasure Reel and get six of a kind of the skull and crossbones, you can win an incredible 50x your stake!

There are also three different Wild symbols in Pirates’ Plenty. The first is a monkey Wild that can appear randomly and will run around the screen stealing all of the low paying gold coin symbols. Then the symbols remaining will fall to the bottom and new premium symbols will fill their place, making for some big potential combos! There is also a message in a bottle wild symbol which is three rows high and takes up an entire reel. It can come with no multiplier or be accompanied by a 2x, 3x, or even 5x multiplier on this Wild symbol! The final Wild symbol looks like the low paying gold coins with the word Wild across it, but these can only appear in the Free Spin Bonus Round, and will be explained later. 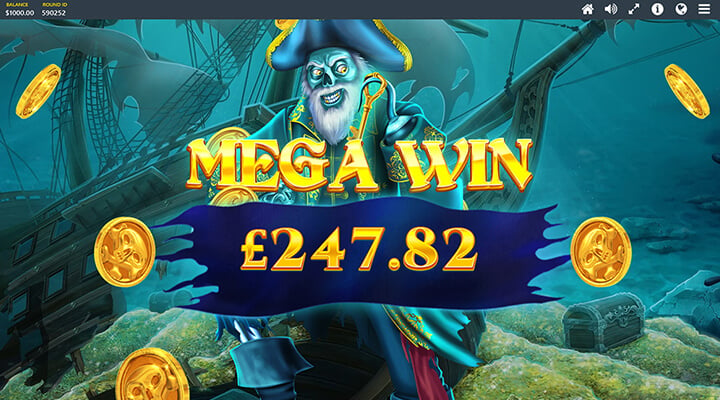 Pirates’ Plenty has some fantastic graphics that will make you feel like you’re pillaging the open sea for lost treasure. There are gold coins that shimmer as you play, and fiery lamps flickering in the background of a Pirate’s cave.

There are a ton of fun animations too like the Wild monkey that runs around and steals low-paying coins, or the Pirate ship that sails across the old map to unlock the sixth Treasure Reels. There are so many extra fun features that you don’t see in other online slots that definitely sets this game apart from others in Canada.

There is also an epic Pirates of the Caribbean-esque song that plays as you play, and will have you hyped up and excited while you’re discovering Pirate booty. Add this with their awesome sound effects, and this is an extremely well-made game (as always) by Red Tiger Gaming.

Pirates’ Plenty online slot has a ton of extra features which make it a very unique game, so let’s dive right in to see what makes it stand out!

This online slot has five reels like most standard slot machines in Canada, but you can unlock a bonus sixth wheel and a ton of extra fun. The sixth Treasure Reel is covered by an old Pirate’s map with a little ship on it and a red X to mark the spot. As you’re playing the base game you will come across random map symbols, and for each one you land, the ship will move across the map along a dotted line, eventually landing on the red X and unlocking the sixth reel. Now you can get some crazy six of a kind combos and some big Pirate prizes!

As we explained before, the three Wild symbols are the monkey that steals low paying symbols, the stacked message in a bottle Wilds that can multiply your win up to 5 times, and the gold coin Wilds that only appear in the Ocean Spins Bonus Round.

To unlock the Ocean Spins Bonus Round, you will need to land three Ocean Spins scatter symbols on a single spin. You will start with 10 Free Spins off the bat, and there will be three treasure chests along the top of the screen, each one contains a different random, but incremental prize amount. Speaking of Free Spins, did you know that you can get 50 Free Spins at OJO when you sign up and make your first deposit, with no wagering requirements?

If a Pirate Captain symbol appears during the Free Spin Bonus Round he will give you a key to unlock the first treasure chest. You’ll need three keys to unlock each chest, and you’ll be awarded a cash prize amount when you do. When you unlock the first two chests, you’ll see one of the low paying gold coin symbols turn into a Wild symbol for the duration of the Ocean Spins Bonus Round. You will also get two Free Spins after the first chest, and Three Free Spins when you unlock the second chest. If you happen to unlock the third treasure chest, the remaining two card suite symbols will turn into Wilds and you will get another five Free Spins. With so many wilds on the board and extra Free Spins, this is where players can win some mega treasure!

Pirates’ Plenty slot also features an autospin mode, so you don’t have to click the spin button every single time. You can set it up between 10 and 100 spins, and also set loss and single-win limits, so you can really enjoy yourself as you sit back and watch the reels help you win sunken treasure. 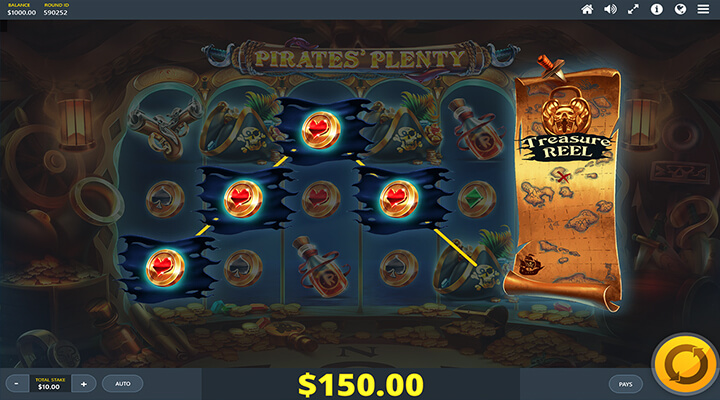 Argh, so what do we think of this pirate adventure at OJO, Amigo!? After travelling the seven seas with Pirates’ Plenty online slot, we have to give this one the OJO Stamp of Approval!

With so many different ways for you to win like the Ocean Spins Bonus Round, Treasure Reels, Wild monkeys, and extra treasure chests, there are so many opportunities for you to win treasure at OJO! And don’t forget that you get 50 Free Spins when you sign up at OJO and make your first deposit. And the best part is there are no wagering requirements, and tons of fun online casino games for you to play as well! So don’t wait Amigo, sign on and play on!