A walk down the Egyptian memory lane with Pharaoh’s Reign slot!

The iGaming industry as we know it today is already saturated with Egyptian slots. From Book of Dead, Egyptian Fortunes to Cleopatra and Book of Atem. OJO can go on for as long as you want. So, he wasn’t very thrilled when he heard about the Pharaoh’s Reign slot. Of course, it all went haywire as soon as he got his hands on the game!

Although the theme of this game has been used hundreds of times in the past, Kalamba Games has done a phenomenal job with Pharaoh’s Reign. If you’ve never heard of Kalamba before, you’re not alone in Canada. It’s a relative newcomer and it’s doing commendable work to bring innovation to the games.

Pharaoh’s Reign slot is a 5-reel 3-row video slot with spectacular visuals. But that was expected considering that it came out in 2021. You can bet anywhere between C$0.20 and C$60 in OJO.

The game has 20 fixed paylines. The “fixed” aspect means all 20 of the paylines will always be active. You cannot enable or disable them to change the symbol payouts. According to the developer, the theoretical RTP of the game is 96.58%.

OJO will tell you more about these rounds in the bonus section. For now, let’s move on to the visuals and audio design of the game. 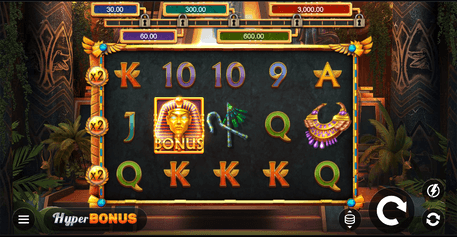 The thing OJO loves the most about proper video slots is the theme. They can tell a story like no other online slots. Classic slots often don’t have a theme and Megaways slots are too complex to follow a story. Video slots are the perfect means to capture a story.

The Pharaoh’s Reign slot is a prime example of video slots. The game interface is not just the 5x3 grid. Rather, it’s set in an environment that feels very familiar. It feels like the grid belongs in that environment.

Being a modern slot game, Pharaoh’s Reign slot has astonishing visuals. The texture and the depth of the graphical elements are mesmerizing at the very least. The backdrop is set in a secret Egyptian temple.

The sound is so immersive that you don’t even notice it. It goes on with the flow of the game to keep you entertained during your session.

When it comes to symbols, there are lots of them in the Pharaoh’s Reign slot. As you may have already imagined, the majority of them are Egypt-inspired. To be precise, it’s the ancient Egypt we’re referring to. You know, the mummies and the pharaohs and whatnot!

To know what the symbols are and how much they pay, you have to open the paytable in the game. You can trigger it from the main menu. There is a total of 12 symbols in Pharaoh’s Reign slot and they are quite a handful!

The highest paying symbol in the game is the Wild. You can’t miss it because “Wild” is written on the symbol. It pays 100x your bet value for 5 on a payline. For 4, 3, and 2 on a payline, the payouts are 25x, 5x, and 1x. Another interesting thing is that Wilds multiply your winnings by 2x for the symbols they replace.

The next two symbols are the golden bucket and the necklace. They both pay 15x for 5 on a payline. All symbols except for the Wild only pay when there are at least 3 on a Payline. For these two, the remaining payouts are 2x, and 1x.

There’s also a “BONUS” symbol that plays the role of a scatter. It helps to trigger the bonus rounds in the game. Speaking of bonus rounds, there are a few of them. 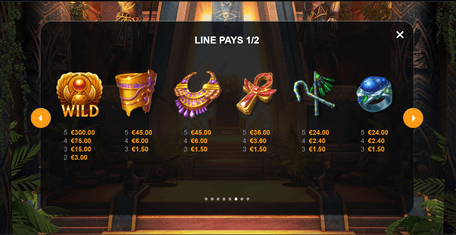 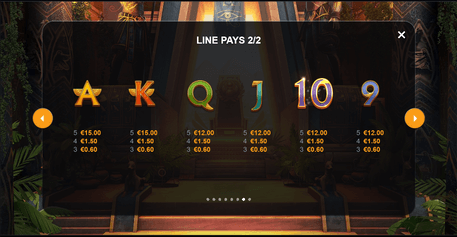 Pharaoh’s Reign slot is packed with bonus rounds. During the base game, if you land at least 3 scatter symbols, you get 10 free spins. Along with the bonus spins, the scatters pay too. For 5, 4, and 3 on a payline, you will get 10x, 5x, and 2x of your bet.

When you’re playing the free spins, the same mechanics repeat again. It means you may keep receiving free spins as long as your luck allows it.

The HyperBonus feature is simply when you buy free spins and play the rounds. You already know about the RTP range for these rounds.

Pharaoh’s Reign might be a new game from a new developer, but the finesse that went into the development is praiseworthy. The gameplay is very refined and intuitive and OJO just loves it!