Own All Properties on Monopoly Megaways slot

In the world of board games, there are no bigger names than Monopoly. This game has been entertaining the youth as well as the children for almost 100 years now! Although it’s long ago before OJO came to the world, it didn’t take long for this game to become one of OJO’s favourite past times. 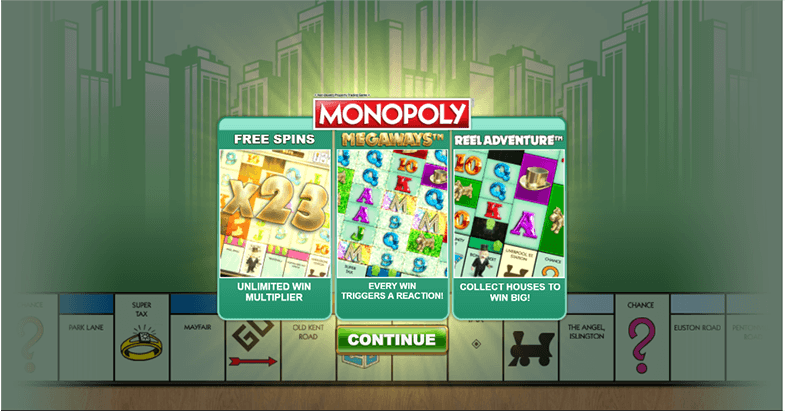 In traditional Megaways style, this video slot has 6 reels. You can think of it as a blend between the board game and modern slot games. It pushes the limits of Megaways to give you up to 117,649 paylines in just one spin.

So, it’s pretty safe to assume that you’ll land some sort of winning combination with each of your spins. It’s a 96.5% RTP game so you’ll get most of your bets back over time.

Underneath the 6-reel set up on the middle of the screen, you can also see the board game and the legendary Mr. Monopoly. You can see the rail stations, the properties, the utilities, and lots of other components of the board game being carried over into this Monopoly Megaways slot. 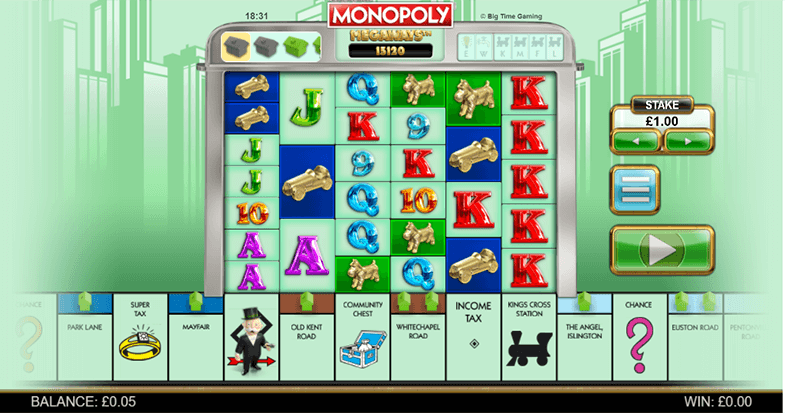 There’s nothing new to explain the theme. It’s as Monopoly-oriented as it can be. You can see the classic buildings in the background of the game. The same iconic logo is displayed on the top portion of your screen. Right under that, you have the Megaways counter where you can see the number of active paylines.

The animation on this video Monopoly Megaways slot is top-notch. With every spin, you’ll see Mr. Monopoly running all over the board. When the avalanche feature is triggered, it looks very beautiful because the rest of the reels are held in place. And the sound? Well, you’ll have to see for yourself.

Top hats, battleships, dogs, cards. Do they ring any bells? It should if you’ve familiar with the Monopoly board game. All of these symbols are present in Monopoly Megaways slot in this Canadian online casino. As it’s a 6-reel slot, the maximum payouts are credited against the 6 on a reel system. 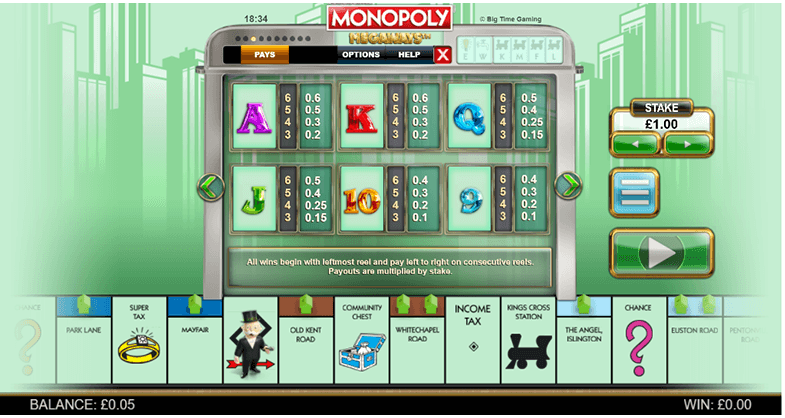 The top hat is the highest paying symbol with a 50x payout. The battleship follows closely with a 5x payout. The car and the dog pay 1.5x and 0.9x of the bet for 6 on a payline respectively. Lastly, you have the royals that pay anywhere between 0.4x and 0.6x.

The wild symbol is the big M that lands on reels 2 and 6 only. It can replace all symbols from a payline.

The primary bonus feature of the Monopoly Megaways slot is free spins. It’s triggered when you have a total of 5 houses. Now, how do you get houses? Well, for that to happen, Mr. Monopoly has to land on a PROPERTY symbol on the third reaction. Every extra reaction you generate will result in a house. When you have 5 houses, 8 free spins will be rewarded.

When you’re playing the free spins rounds, if you land additional houses, you’ll get 3 more free spins. This can go on for as long as your luck allows. Also, the multiplier starts at 1x during the beginning of these rounds and increases by 1 for every property owned. 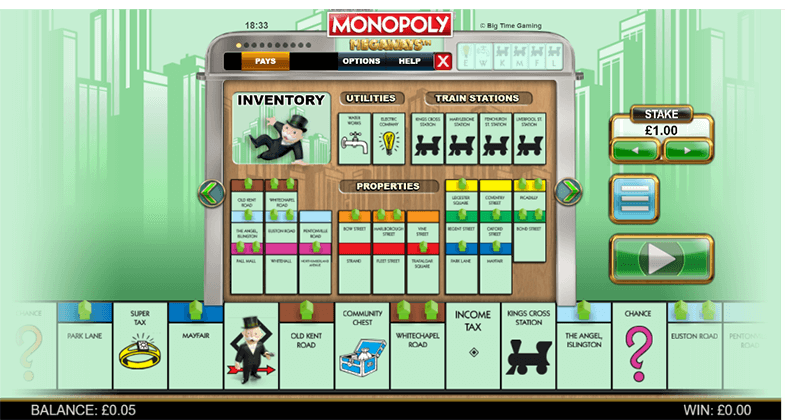 If you’re a huge Monopoly fan, OJO and you could become the best of friends! To test out your luck on Monopoly Megaways slot, the modern take of the classic board game, sign up at PlayOJO right now. Also, did we mention that OJO doesn’t impose any wagering requirements?