Get the Magic Out of Magician’s Secret Slot

Magician’s Secret slot is one of the most innovative 6-reel video slots to date.

Pragmatic Play has always been on OJO’s radar with its unique games. From Buffalo Kings Megaways to Big Bass Bonanza, the developer doesn’t seem to run out of ideas. It’s all that better for the Canadian casino players because you always have new titles to explore.

One of the games that got OJO’s attention very recently is the Magician’s Secret slot. It’s not your usual video slot. Why? You’ll have to read what OJO has to say to understand why.

The most noticeable feature of this game is the reel count. We’re most accustomed to 5-reel video slots. And whenever we see 6-reels, we often think of a Megaways game. However, Magician’s Secret slot managed to blend the two with a 6-reel video slot.

Thanks to the added reel, the number of paylines in the game has skyrocketed to a whopping 4096! All of the lines are active at all times. As a result, the game has a spectacular hit rate although it’s a high volatility title.

In the base game, the RTP is 96.51% which is very good considering the calibre of this game. There is a “Buy Free Spins” feature where you can trigger the free spins round for real money. In this particular instance, the RTP of the game drops down to 96.50%. Not that it’s that big of a deal anyway! 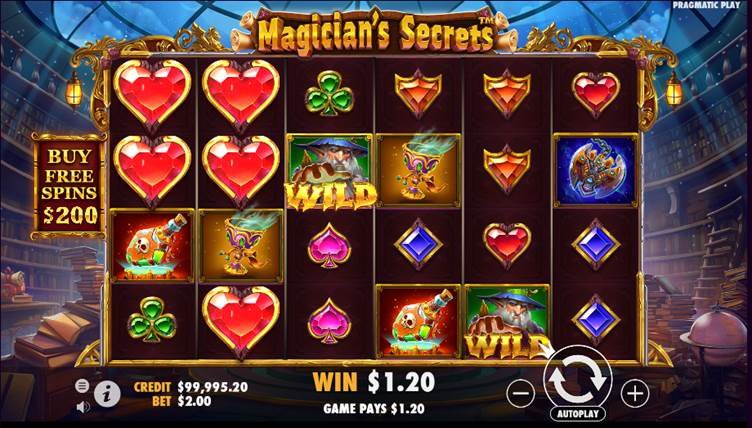 In the traditional Pragmatic Play style, Magician’s Secret slot offers a very lucrative theme. The game takes place in a magician’s library. Along with reading hundreds of books, you can stargaze through the glass ceiling all you want!

The visuals of the Magician’s Secret slot are very modern. The symbols, the grids, and the surroundings show the craftsmanship of the developers. The library atmosphere is so realistic that it feels right out of an animated movie!

Right underneath the star-dazzled sky, you’ll see the logo of the game. Two lanterns are blinking on either side of the grid. The rotating globe in the bottom right corner and the moving comets have really set the game for maximum immersion.

As for the sound design, there’s nothing new to tell. Pragmatic Play knows what it’s doing. The sounds you hear are very much in-sync with the visuals.

Finally, OJO is about to tell you about the symbols in the Magician's Secret Slot. This is what you’ve been waiting for, aren’t you?

As there are 6 reels in the game, you may think that there are lots of symbols. The reality is different. There are only 10 main symbols, 1 wild symbol, and 1 scatter symbol. This is one of the reasons this video slot has such an amazing hit rate.

The most anticipated symbol in the game is the Book of Magic. It was quite obvious to OJO because the game is called the Magician’s Secret slot. All their secrets are written in the book! This symbol pays a whopping 50x of your bet for 6 on a payline!

Now, you may have seen games with higher symbol payouts, but remember it’s a high volatility 6-reel game.

After the big 5, you get the 5 low paying symbols. Four of them are card suits but with different coloured gemstones. The last one is the triangular red gemstone.

The remaining two symbols are the wild and the scatter. The Magician is the wild and it can appear on reels 2, 3, 4, and 5. It can replace all symbols except for the scatters. Sometimes, the wild may expand and take over an entire reel. You’ll also get a multiplier on your payouts when that happens.

Lastly, the scatter lands on all reels and it can trigger the free spins round for at least 3 on a payline. It also pays up to a massive 2,000x your bet value if you land 6 of them! 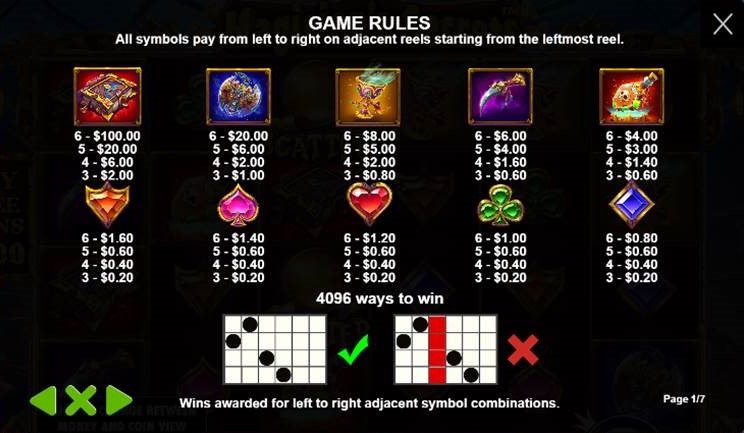 You get 10 free spins when you land between 3-6 scatters. During these spins, if a wild appears on reels 3 or 4, it’ll expand to take over. There’s a multiplier as well that increases by x1 every time you get an expanding wild.

As for the scatters, at least 3 of them can retrigger the free spins for as long as you can keep up with the Magician’s Secret slot. Lastly, there is a sticky wilds round where you can choose a symbol in advance and it’ll transform into a wild and stick for the entire round.

The bonus rounds end as soon as you gather a 5,000x payout.

If unique online slots seem to tickle your fantasy the most, OJO highly recommends trying out the Magician’s Secret slot! This 6-reel 4-row game is no less than a magical experience in itself.