The Pyramids and Your Journey to the Tombs

The Scarab Queen is Someone OJO can’t find on his own. Are you ready to accompany him?

Pragmatic Play has been dominating the themed online slots for as long as OJO can remember. John Hunter has become OJO’s very close friend, just like Riche Wild from Play’n Go. This time, OJO is going on an adventure with John Hunter to the tomb of the Scarab Queen. Sounds intriguing? Then tag along with him.

John Hunter and the Tomb of the Scarab Queen slot

John Hunter and the Tomb of the Scarab Queen slot is a traditional 5-reel video slot from Pragmatic Play. It’s a 5x3 layout with 25 paylines. According to the developer, the game has a theoretical RTP of 96.5% and offers medium-high volatility. In this Canadian online casino, this could be the slot that changes your life forever!

Why you ask? Because you can win up to a whopping C$250,000 in this game. The game mechanics is very simple to follow even for absolute beginners. 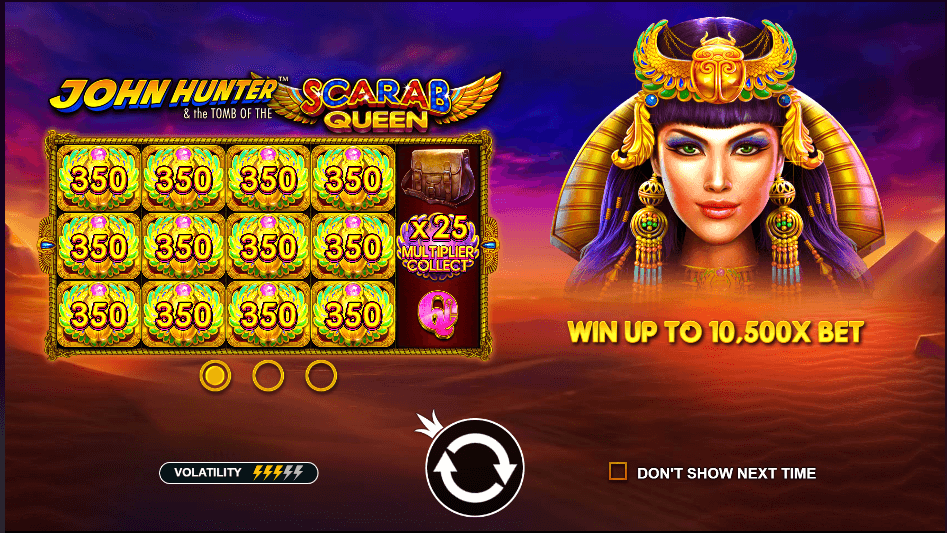 The theme of the game revolves around an Egyptian Queen who has hidden her treasures somewhere in her tomb. Your mission is to find them and take them home with you. The backdrop of the game shows the iconic sandy dunes around the Pyramids.

It’s an HD slot which means you can see all the symbols and the animations in amazing detail. To accompany the visuals, developers have incorporated an amazing soundtrack to go with the game. The edge of the grid also has very intricate designs, topped off by two blue gems on either side.

The symbols are what matters the most if you want to put the paylines to work. There are not many symbols that you have to keep track of. You have the regular royals which would be A, K, J, and Q. Then, you have the John Hunter symbol, the scarab queen symbol, Anubis, a gun, and a bag.

The scatter symbol is a pyramid with scatter written on it. Scarab Queen plays the role of the wild in John Hunter and the Tomb of the Scarab Queen slot. The royal symbols pay up to C$1 if you land 5 on the reels.

The bag, the gun, the Anubis, and the John Hunter symbols pay C$1.25, C$1.50, C$1.75, and C$8 respectively. As you can see, they are high-paying symbols. To trigger the regular bonus round, you need at least 3 scatters on active paylines. You’ll also receive 8 free spins when that happens.

Speaking of the bonus features, there’s a unique feature on this Pragmatic Play slot known as Money Collect. On the base game, a MONEY SYMBOL may appear on reels 1, 2, 3, or 4. Also, five different COLLECT symbols appear on reel 5 only. 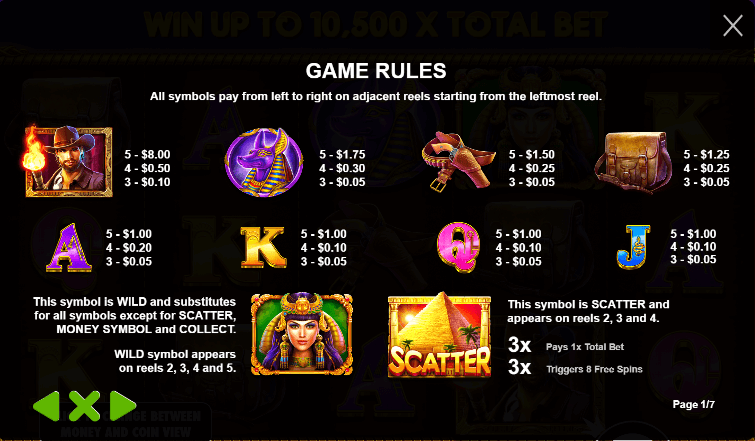 Let’s start with the Money Collect feature first. The Money symbols appear during the base game and they take up a value from a predefined set. If you’re lucky enough to land one, the value of the symbol will be added to your payout. However, you’ll need a COLLECT symbol on the 5th reel for this work. If you only get the MONEY symbol, it won’t add up to your payout.

The rest of the four special symbols are based on the COLLECT. You get extra credits, multipliers, respins, or expanding COLLECTS to change how the payout for each spin works.

• Maximum winning could be higher

If you're craving for an Egyptian adventure for quite some time now, John Hunter and the Tomb of the Scarab Queen slot might be just the one you need. And when you got OJO on your side, you’ve got nothing to worry about.