Pick your side, fight it out and win big prizes as the Underground Rap Gods from the East Coast and West Coast collide!

When it comes to hip-hop music and intense rap battles, there is no one more excited than OJO. Especially if there is an East Coast vs. West Coast rivalry added into the mix! If you are anything like OJO, you are going to love the Hustling slot from Red Tiger Gaming just as much as he does!

The American East Coast vs. West Coast rivalry spread across several areas. But nowhere is it more prominent than in the hip-hop and rap music scene.

It is not uncommon for rappers from these two regions with their different cultures, struggles, and life experiences to go head to head against one another. There is always a tense competition in their bid to establish supremacy.

The renowned game developer Red Tiger Gaming created the Hustling slot and released it to players in late 2021. The main concept behind the game was to create the hair-raising environment of an underground rap battle.

The game has 10 fixed paylines and comes with a 3x5 grid. A 3x5 grid means that there are 5 reels and 3 reel positions.

But there is a unique element to this highly volatile game. The Hustling slot operates on mechanics known as pays both ways.

So, in most online slots, paylines are formed only in one direction. Generally speaking, this is from the left to right. However, in the Hustling slot, winning paylines can be formed from either direction.

The RTP for this game is 95.69%, which is slightly lower than the level that OJO prefers. But there are other redeeming features in the game.

The maximum win potential is as high as C$240,000. The maximum bet you can place is also set at a high C$80. But the minimum bet is set at C$0.1, so you can get started with relatively low funds as well. 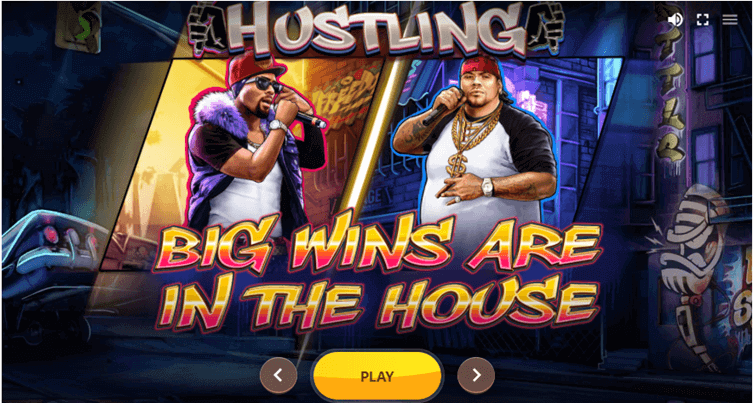 The theme of the Hustling slot aims to represent a juxtaposition between the cultures of the East Coast and the West Coast. So, for example, if you look outside the grid of the game, you will find two very different realities presented.

The music is also a characteristically fitting lofi beat that will be good company as you play the Hustling slot and score big wins.

The high-paying symbols in the Hustling slot game feature items which commonly adorn the underground rappers in both the East Coast as well as the West Coast.

They include a gold chain with a dollar sign pendant, sneaker, a stereo set, graffiti spray bottles, and a cap.

You need to get at least 3 of these symbols to trigger a winning payline.

The low-paying symbols in this Hustling slot game are represented by the common royal symbols. If you forgot what they are or do not know, they are the symbols commonly known as A, K, Q, J, and 10.

To trigger a winning payline with the low-paying royal symbols, you also need at least 3 of each symbol. 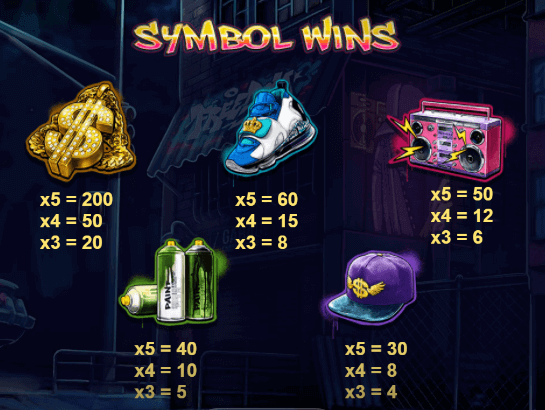 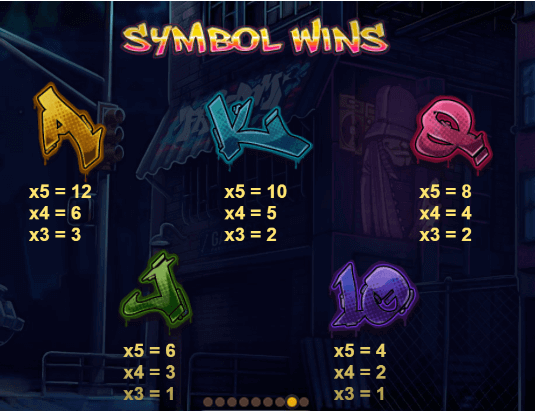 The free spins feature and the epic rap battle which forms part of the free spins rounds is what makes the Hustling slot so special.

Getting an East Wild as well as a West Wild at the same time can trigger the free spins feature. You will be awarded 10 free spins and you have to choose one rapper to battle it out with.

Both the wilds are frozen in their position for the duration of the free spins rounds. If either of the Super Wild symbols forms part of a winning payline, its multiplier increases.

By the end of the free spins, if your chosen rapper symbol has the higher multiplier, you will get another 10 free spins.

If there is a tie, you will get 1 free spin as a tie-breaker. However, if your opponent rapper’s symbol has the higher multiplier, the free spins feature ends and the multipliers are reset.

Things get interesting when both the wilds form part of the same winning payline. In that case, both their multipliers are multiplied together and applied. As you can imagine, this can potentially increase your winnings by an unimaginable magnitude!

The Hustling slot can be savored for its theme, music, and the in-game rap battles alone. At least, that is how fans of hip-hop like OJO will find it. But there are other reasons why you should consider it. The free spins bonus, both ways paylines, and the win multipliers can all work in your favor to get you great wins!

However, if you want a game with a better RTP, OJO recommends you check out The Expendables Megaways slot too!