Hooligan Hustle is the most happening video slot in the vicinity.

Are you afraid of Hooligans? So is OJO! Every sensible human being should be afraid of them and avoid them at all costs. However, it’s not always possible to control your curiosity to know what they do and how they do it.

Well, to help you quench your thirst for knowledge, OJO has brought you an amazing video slot today. This is one of those games that truly encapsulates the idea of a video game and it’s called the Hooligan Hustle slot.

Do you want to take a swing at who might be the developer of the game? It’s Play’n Go! Very few software providers have shown the level of excellence Play’n Go has in terms of 3D game designs.

Hooligan Hustle slot is a 5-reel 3-row video slot at its core. But to get to the core, you have to get through a lot. The antagonizing intro, the explosions, the hooligans shouting in the distance. Everything creates a chaotic atmosphere around the game.

Can you imagine what happens when you pack this many paylines in a regular 5-reel video slot? You experience madness. Winning combinations will generate left and right as the hooligans should in the background! 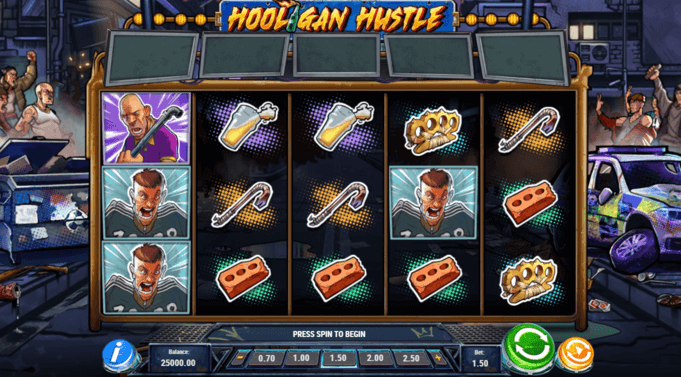 There’s no way to express the visuals and the audio design of the Hooligan Hustle slot in words. You have to see it with your own eyes to see what OJO is talking about. When you enter the game for the first time, it doesn’t feel like one of the online slots at all! Rather, it seems like a full-fledged video game for PC or consoles!

The intro animation pans the camera from the sky to a filth-ridden alley where the hooligans have gathered to fight. And you, the player, is the intermediary with the 5x3 grid in your hands.

Every single component of the game is in-tune with the theme. Hooligan Hustle has a cartoonish charm to it and it’s carried over into the buttons, the background, and the foreground. Nothing seems out of place here.

Needless to say, Play’n Go has done a phenomenal job of designing the audio for this game. As there are a lot of things happening all over, it’s better that you keep the volume low. You never know when the hooligans might throw a Molotov at you!

If you were hoping to find standard slot game symbols in the Hooligan Hustle slot, you’re still to capture the essence of Play’n Go. Every single symbol in the game is inspired by the theme. You have 4 hooligans with different weapons as the main symbols. The lower paying symbols are the weapons commonly used in a street rumble.

The symbols don’t pay much individually. Even the strongest hooligan pays 2x your bet if you have 5 of it on a payline. The other hooligan with the cap on will pay 1.8x of your bet. The pipe-bearing hooligan pays 1.6x your bet and the one with no weapons can pay 1.4x your bet.

That takes care of the most dangerous characters. Now, we can move on to the weapons they use.

The knuckleduster and the spiked bat pay the same. Both these symbols can give you 0.5x of your bet for 5 on a payline. The crowbar, the brick, and the glass of beer are on the same level. All of them pay 0.3x your bet.

The remaining two symbols are the wild and the scatter. The wild is a traffic cone that pays for only 5 on a payline. You can receive 2x your bet for this payline. Also, it can replace other symbols from a payline to generate a winning combination. The only symbol the wild cannot touch is the scatter.

Speaking of the scatter, it’s the Molotov cocktail. Interestingly, it’s the highest paying symbol in the Hooligan Hustle slot. It pays a mesmerizing 100x your bet for 5 on a line! If you land at least 3 of them, you enter the free spins round.

There’s an additional mystery symbol. It’s a wooden box that lands in batches to reveal matching symbols. It may contain any of them except for the scatters. 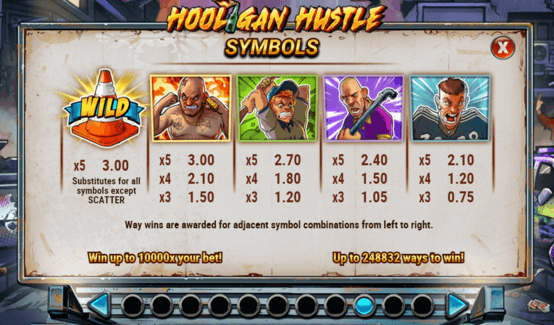 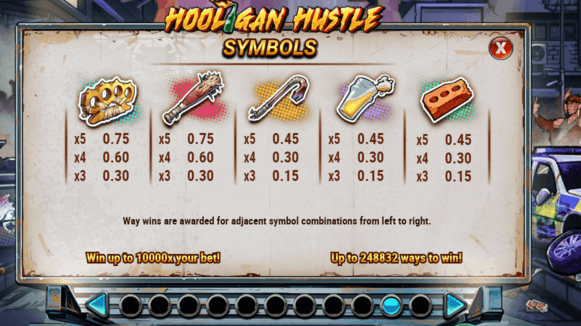 The Hooligan Hustle slot is packed with bonus features. The free spins round through the scatter win is only the beginning of it. There are three types of free spin. The Lairy, the Riot, and the Anarchy. It depends on how many of the Rumble Row reel modifiers you have active.

Oh! Did OJO forget to tell you about the Rumble Row? It’s the 5 TV screens you see on top of the grid. It randomly activates reel modifiers to help you win more. It may come with expanding wilds, multipliers, or a combination of both.

You also get a splitting symbol bonus in Hooligan Hustle slot. At any time, a symbol might split to increase the payout. All symbols except for the scatters can split.

If you’re familiar with previous Play’n Go titles like Book of Dead, you know what this developer is capable of. Hooligan Hustle slot is just another example of the awesomeness of the provider. Sign up right now to give this unique slot a go!