Hit the Target with Hero in Heroes Arrow Slot

Massive jackpots may bless your pockets. All you have to do is hit the bull’s eye with your arrows!

Robin Hood has been a prominent character in the iGaming industry. Lots of software providers have tried their hands on online slots featuring him. Some became successful while others got lost in oblivion.

OJO respects the man for helping the poor. So, he’s very excited to tell you about the Heroes Arrow slot by Playtech. If you haven’t guessed already, it features the legend himself. Or at least his lookalike.

In coordination with Rarestone, Playtech has outdone itself once again with the Heroes Arrow slot. It’s a 5-reel video slot with 3 rows. So, you get the 5x3 layout. However, it’s not the standard layout you’re used to seeing.

4 reels are on the left side of the screen while the 5th reel is separately held on the right side. Both sets are diagonally placed to give you the notion of a 3D environment. We’re mentioning it here instead of the theme section because it’s a very important detail of the game. So important that it can trigger the in-game jackpots!

Heroes Arrow slot has 20 paylines and all of them are fixed. It means you cannot change the number of active paylines when you play. As a result, the coin value you set for your bets will be multiplied by 20 to form the final bet value. 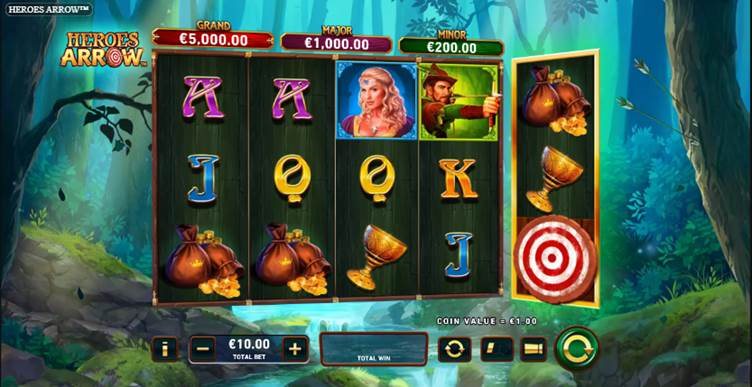 The game takes place in a grim forest. It feels like you’re in some kind of a Disney movie where you’re going through the forest to rescue the princess. There are subtle animations in the background, mostly falling leaves. It definitely adds a nice dynamic to the overall visuals of the game.

From both sides of the screen, there are two trees coming in. One of the trees has 2 arrows stuck in it. It’s a minor detail but OJO really loved it. Because when Robin Hood shoots his arrows from the left side, it’s very much possible that they hit the tree.

The enter soundtrack is very calm which actually translates to a very suspenseful environment. Overall, the theme of the game can be very exciting if you’re a fan of this genre.

Heroes Arrow slot has a very interesting portfolio of symbols. Although it's nothing new for Rarestone under the Playtech network, it does include a new dynamic to the game.

Let’s talk about the regular symbols first. The Royal Guard symbol pays 8x if you land 5 of it on a payline. Then, the princess pays 6x for 5 on a payline. Following the same pattern, the gold cup and the sack of gold coins pay 4x your bet.

For the 3 on a payline and 4 on a payline payouts for the rest of the symbols, please refer to the paytable of the game.

The wild symbol is the golden “WILD” and you won’t miss it. It can substitute all of the symbols we’ve discussed so far but not the ones we’re about to discuss. The wild symbol only appears on reels 2, 3, 4, and 5.

There are two different variants of the hero symbol. This is the one that resembles Robin Hood. The game classifies them as Hero Red and Hero Green. They can appear on reels 1 through 4.

The castle symbol is the scatter in Heroes Arrow slot. It’s also the highest payer in the game with a whopping 50x payout for 5 on a payline. They also trigger the Free Games round when you have at least 3.

Last but not least, there’s a target symbol that only appears on reel 5 to interact with the hero symbols. 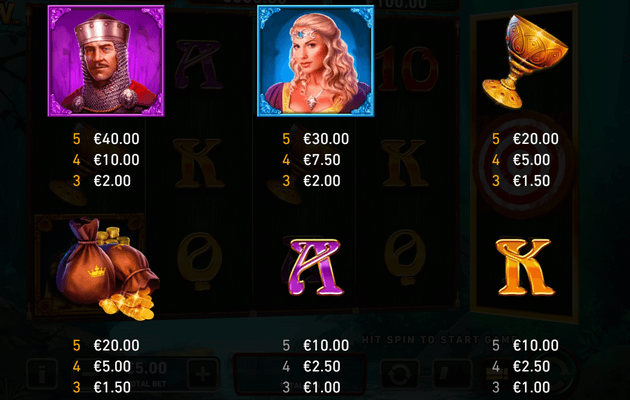 Heroes Arrow slot is quite packed with bonus features. All of the extra symbols we’ve discussed in the previous section have roles to play in these features.

First up, we have the Arrow Shot Feature. It’s when the target symbol and one of the hero symbols lands on the same row. The hero shoots the target, and you get a payout. For the green one, you may get 2x, 3x, 4x, 5x, or 8x of your bet.

For the red one, it’s going to be 15x, 20x, 100x, or 500x! If you haven’t realized already, it’s the Red Hero symbol that triggers the in-game jackpot labelled Minor, Major, and Grand.

The castle symbol triggers the Free Game round where you get an additional tally meter. It’s at 0 when the round starts. Every time you get the Arrow Shot Feature during the Free Game triggered by the green hero, the prize is added to the tally meter. At the end of the round, everything is credited into the player’s account.

The Robin Hood has been a popular genre of slot games for a very long time. If you notice the popularity of games like Robin Hood’s Wild Forest before, you can understand what we’re talking about.