The legend of Chinese dragons is quite popular all over the world. The question is how fascinated are you about them? No, we’re not talking about the CGI dragons from Game of Thrones. Rather, we’re referring to the mean-looking yet cartoonish dragons in the Floating Dragon slot.

Also known as the Floating Dragon Hold and Win slot, this game is a piece of art by Pragmatic Play. This software provider seems to be on a roll since the day it was born. It just goes on and on with newer and more innovative titles for the Canadian players as well as the rest of the world.

The Floating Dragon slot is one of those titles to make online slots a little more enjoyable. Now, you can’t take this game seriously. OJO was very clear about it. It’s a cartoonish rendition of what the legendary Chinese dragons may look like.

In terms of layout and mechanics, it’s nothing over the top. The Floating Dragon slot is a 5-reel 3-row video slot, meaning you have a 5x3 grid layout. The game offers 10 fixed paylines, a pretty standard offering from Pragmatic Play.

According to Pragmatic Play, the game’s theoretical RTP is 96.71%. It means you can expect to win back 96.71% of your bets over time. It’s calculated over a long period of time. You can think of the RTP of online slots as the mathematical average of the payouts.

You can expect up to 5,000 times your bet as the maximum payout. It’s a great number for a high volatility slot such as this.

The biggest selling point of the Floating Dragon slot is the Hold & Spin feature. It’s a Trademark by Aristocrat Technologies Australia. As it seems, our Aussie friends are way ahead of the rest of us. First the Megaways and then the Hold & Spin. 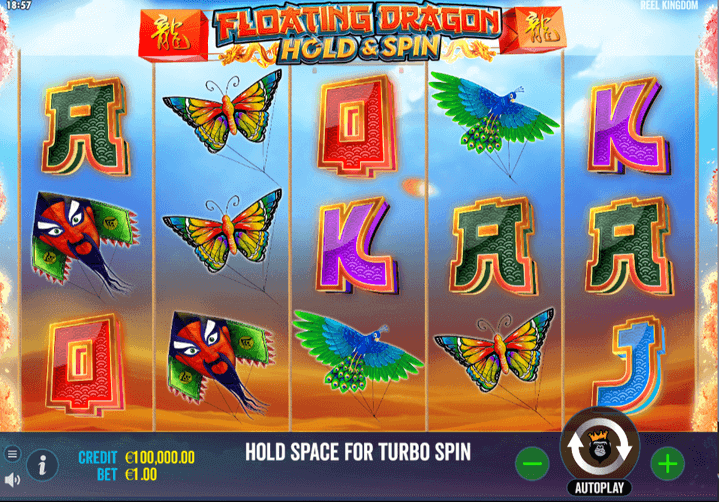 Well, we have to admit, the theme of the game is quite something. Even OJO is surprised with how good yet how funky the game looks. It’s interesting because OJO is used to seeing the weirdest stuff on the internet!

Coming back to the Floating Dragon slot, it has a very minimalistic interface. You can see the 5 reels very clearly. But they are translucent. It means the backdrop and the reels kind of merge together to create a very beautiful game interface.

On both sides of the reels, you’ll see the fluffy trees. You’ve definitely seen these trees before in romantic scenes of Japanese or Chinese movies. On top of the interface, you have the massive “Floating Dragon Hold & Spin” logo dangling. It’s rocking back and forth to make the game more lively.

It’s the symbols that make everything possible in online slots. It’s true whether you play 3-reel classic slots, 5-reel video slots, or 6-reel Megaways slot. So, it’s obvious that your payouts in the Floating Dragon slot will come from the symbols.

Just like the theme of the game is inspired by ancient Chinese culture, the symbols are too. They look stunning although a bit cartoonish. You have a total of 10 symbols except for the wild and the scatter.

The picture symbols are the higher paying ones. You have the Ship that pays C$200 for 5 on a payline. This is the only symbol that pays down to 2 on a payline. For the rest of them, you need to at least 3 to generate a payout.

Now, these are interesting symbols because they share a characteristic from other Pragmatic Play slots like Big Bass Bonanza. They come with a monetary value that is added to your final payout!

The low paying symbols or the royals, however you may want to address them, all pay the same. You can get C$10 for 5 of them on a payline.

The last two symbols would be the wild and the scatter. The wild is a beautiful woman who can replace any symbol on the reels except for the scatter. It makes sense because the scatter is a very scary-looking Dragon! The Floating Dragon that is!

The biggest bonus feature of the Floating Dragon slot is undoubtedly the Hold & Spin. For this, you need a specialized symbol known as the Money symbol. There are two of them in the game. One is a bright yellow circle while the other one is a black diamond.

The former can only land on the middle reel during the base game. The Hold & Spin feature is triggered when all 3 positions of the middle reel are taken. They “Hold” their position and the rest of the reels “Spin” to uncover more payouts for you.

The diamond Money symbol lands on any reel except for the middle one during the Hold & Spin round. It comes with a random multiplier between 100x and 4993x the total bet.

Apart from this feature, you get the usual free spins round by landing at least 3 scatter symbols. You get the usual multipliers and retrigger options at other Pragmatic titles.

If the ancient Chinese myths intrigue you in life, then you must check out the Floating Dragon slot by Pragmatic Play. Sign up now to start playing.