Are you ready to bounce as high as the balls take you?

Bouncy balls can be a great source of entertainment if you know how to play them. The same goes for the Bouncy Balls 2 slot by Eyecon. In the past few days, OJO can’t seem to get enough of it. Every time we walk into him, he seems embarrassed as if he’s doing something on his phone that he’s not supposed to do.

Thankfully, as it turned out, he was only trying to understand the mechanics of the Bouncy Ball 2 slot.

Bouncy Balls 2 slot is a very fresh offering from renowned provider Eyecon. Just like the name of the game, it has lots and lots of bouncy balls on the grid. Speaking of the grid, it’s not your traditional video slot in this online casino in Canada.

Rather, the game has a 5x5 grid where the balls are lined up. Now, there are video slots with a 5x5 layout. Then why did you say that it’s not a traditional one? Well, it’s because of the game’s mechanics. Instead of the regular payline-based mechanics, it follows the Clusterpays.

In this mechanic, you have to form clusters of the same symbols rather than trying to land the symbols on specific paylines. The minimum number of symbols to form a cluster is 5 and it can be over 16!

When you press the button that’s supposed to spin the reels, you won’t see any spinning motion. Instead, you’ll see a cascading motion where all 25 of the symbols will drop and a new set of 25 will appear.

The game comes with a massive 10,000x winning potential. 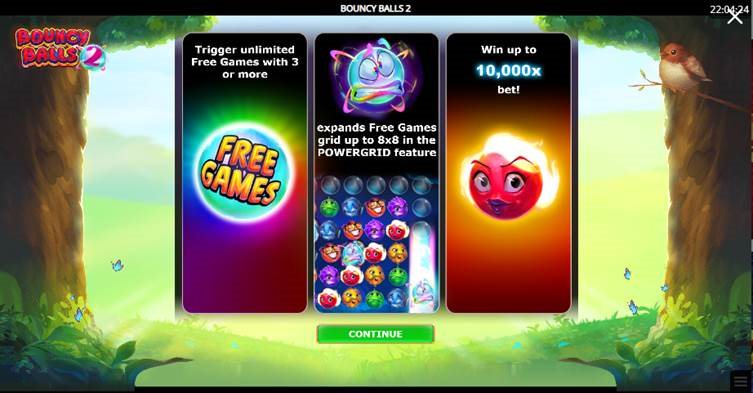 The game takes place in a vibrant forest with butterflies flying around. It’s the strongest animation but you’ll also see a bird sitting on a branch and the vast meadows behind the grid.

There’s very upbeat music that comes on from time to time. A very interesting feature is that each bouncy ball has its own sound effect. When you meet the maximum requirement to form a cluster, you’ll see the balls screaming to the top of their lungs.

There are various types of balls in the Bouncy Balls 2 slot from Eyecon. You have the angry purple one, the fiery red one, the chill yellow one, the sad blue one, the happy orange one with the glasses, and the grumpy green ones.

The firey red symbol is the highest paying one if you land more than 9 and form a cluster. Oh, did you OJO tell you the symbols must be adjacent vertically or horizontally?

Then, you have a Bonusball symbol and a PowerUp ball symbol. The bonusball only comes during the base game and they don’t form clusters. If you have 3 or more anywhere on the grid, it triggers the free spins round. 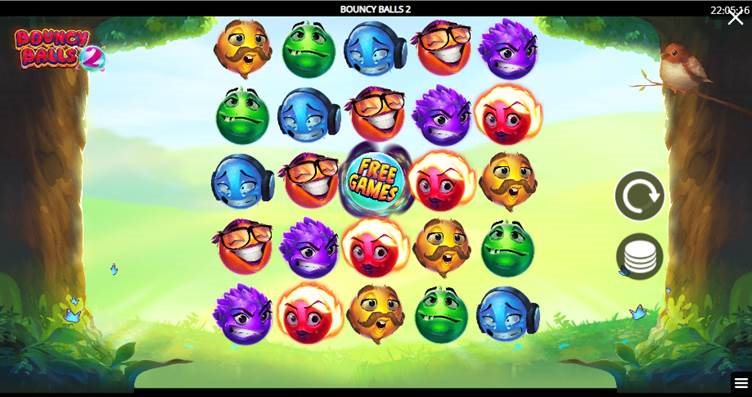 You already know how the free spins round is triggered. During this round, you can get an additional symbol which is the PowerUp ball. Like the other bonus symbol, it doesn’t form clusters as well. However, it can increase the size of the grid from 5x5 to 8x8!

✔ No paylines so it’s easier for new players

If you’re looking for a splash of freshness in this jungle of online slots, Bouncy Balls 2 slot can be just what you need. The innovative game mechanics will give a different taste. Now you know why OJO wouldn’t come out of his room.