Hey there, OJOers! Feel like taking a walk on the wild side? Well, with Wolf Gold slot machine, you’re in luck.

Today’s online casino game review finds us deep in the rugged desert lands of the United States. Only our company are the noble beasts of the Great American Plains and our guide will be the light of the moon on Pragmatic Play’s Wolf Gold slot game.

Playing Wolf Gold slot in the UK at PlayOJO is made more thrilling thanks to our kickers. New players can try their luck on the game with 50 free spins with no wagering requirements! Read on to discover just why OJO loves the Wolf Gold slot machine by Pragmatic Play… 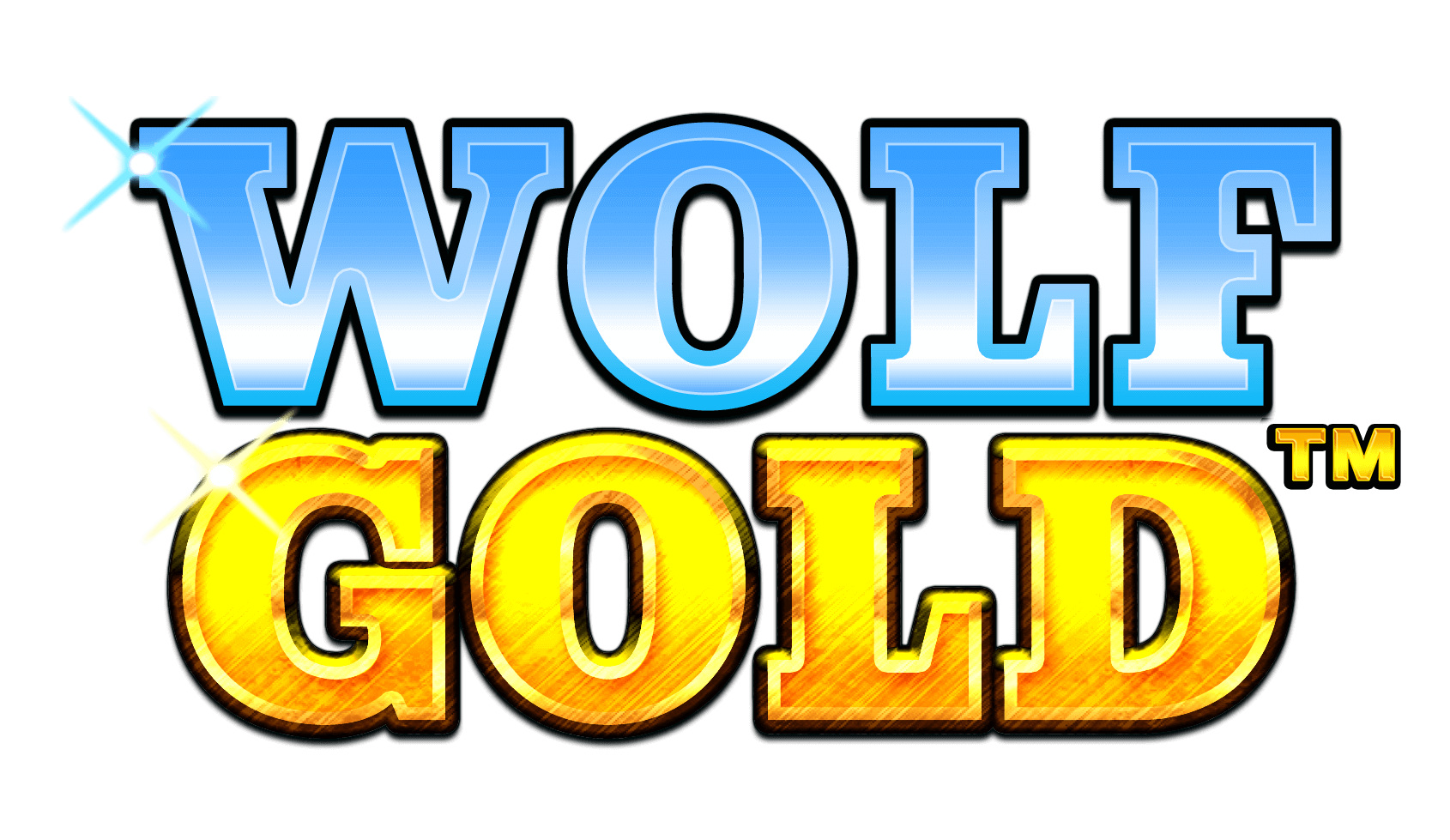 The Wolf Gold slot is all about the untamed beasts roaming the deserts of the Western United States. In addition to the court cards from a standard deck that represent lower value symbols, some of America’s most iconic creatures call the reels home.

The game’s animal symbols are the mysterious cougar (no, not an attractive older woman!), a powerful stallion, the noble bald eagle, the mighty buffalo, and, of course, the wild wolf itself.

There’s also a full moon symbol and the game’s Scatter icon is represented by a landscape shot of where the animals live. This desert image also provides the slot’s backdrop. 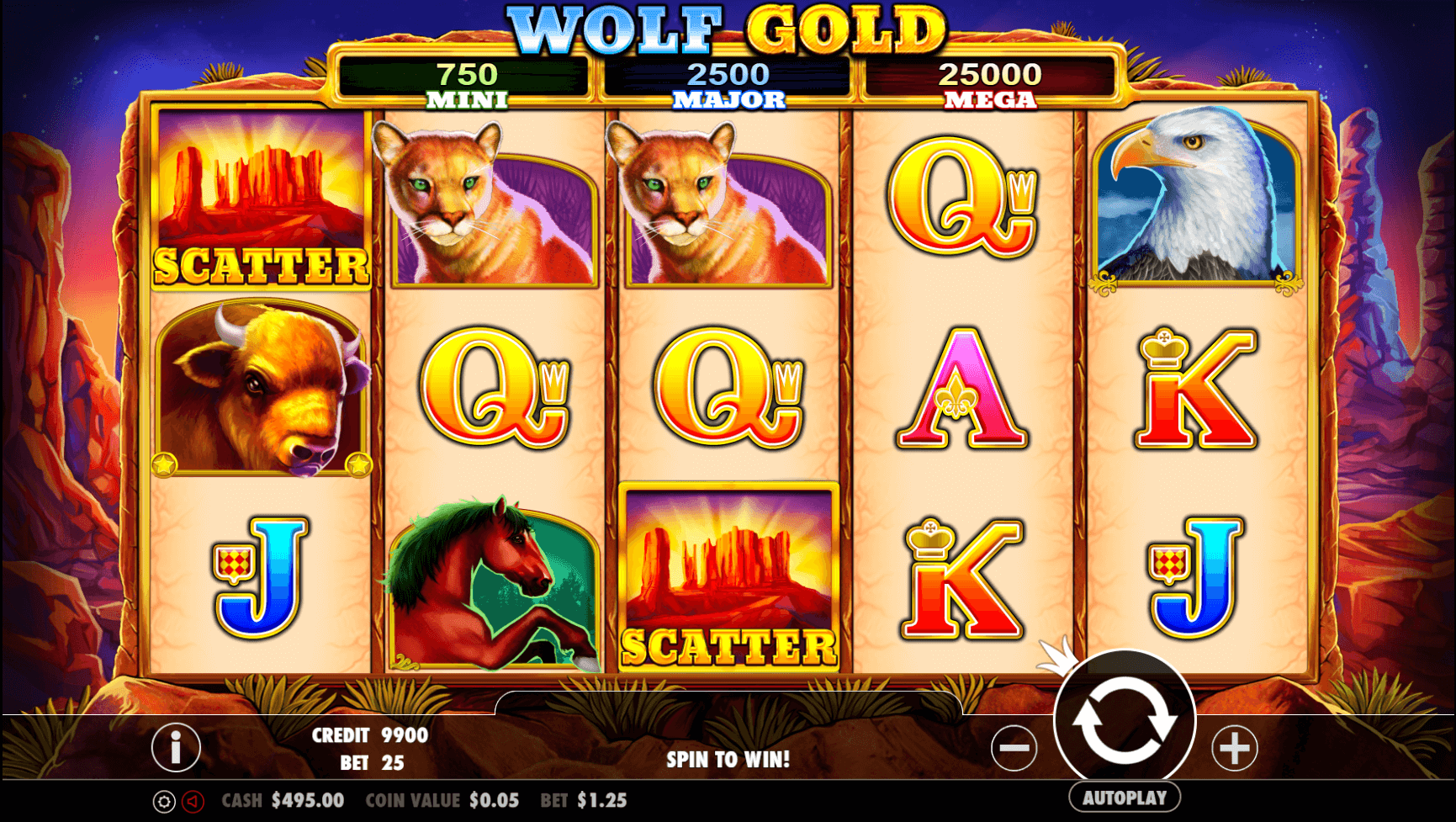 When you play the Wolf Gold online slot, you’ll see that the action takes place across five reels and three rows. These form 25 fixed win lines, along which players must match symbols. This online casino game will award winning combinations of three or more of the same symbols on consecutive reels going from left to right.

Wolf Gold also features the title character as a Wild symbol. The majestic wolf will substitute for any of the game’s symbols (except the Scatter). 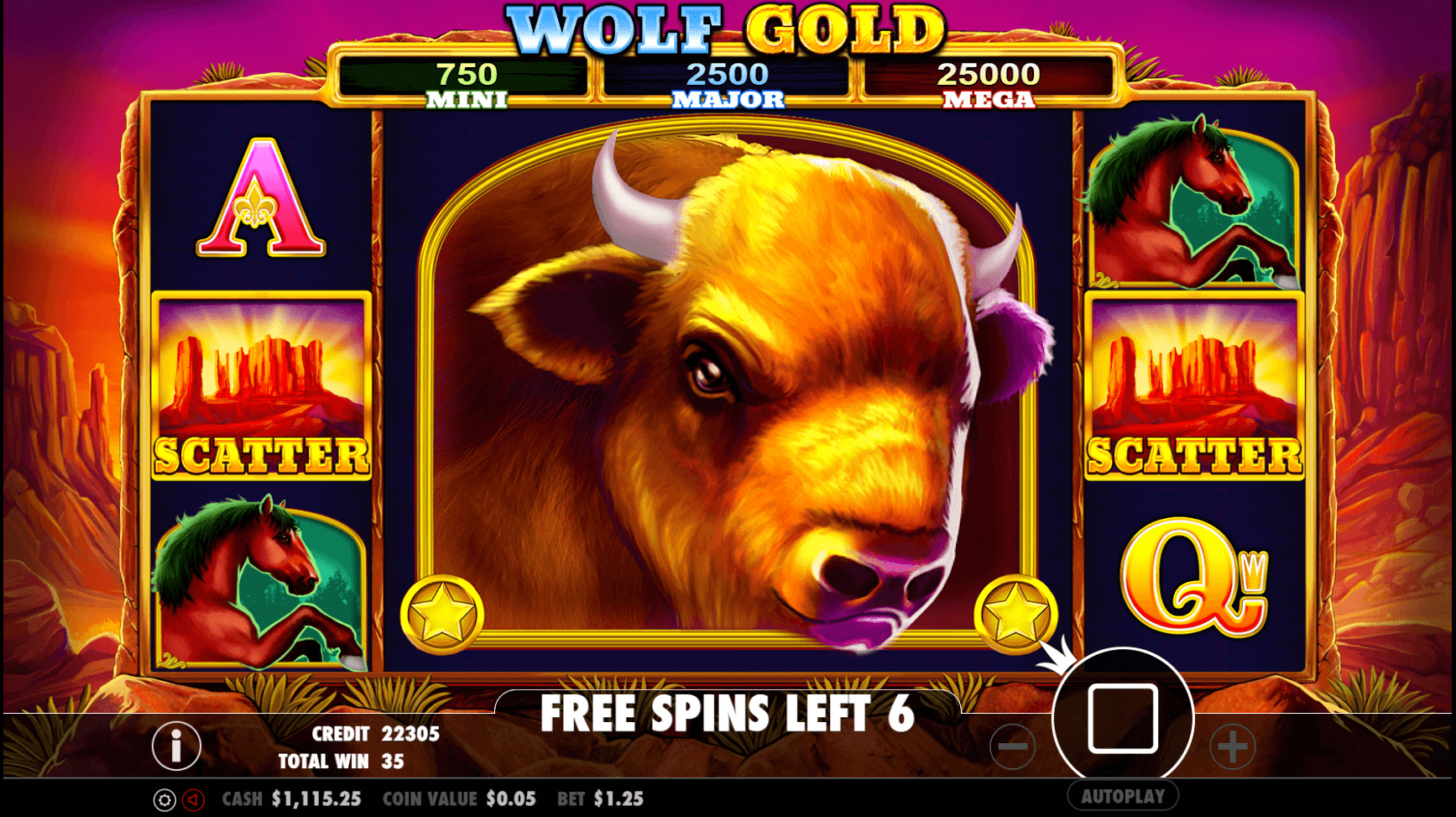 As any great naturalist will tell you, wolves are social creatures and, evidently, Pragmatic Play didn’t skip their animal biology classes. The star of the Wolf Gold slot game never appears alone. During both the main game and Free Spins mode, players will find stacks of the title’s ferocious Wild symbol.

Finally, the Wolf Gold slot RTP rating is a reasonable 96.01%.

The first feature on the title is the Wolf Gold Free Spins mode during which the central three reels spin as one massive symbol. OJO doesn’t need to tell you that this significantly increases the likelihood of players making winning combinations.

To trigger the Free Spins, players must land the desert Scatter symbol anywhere on reels one, three, and five simultaneously. The game awards five free chances to win with the bumper central reel. Meanwhile, new Scatters landing again on the first, third, and fifth reels will trigger an extra three Free Spins. 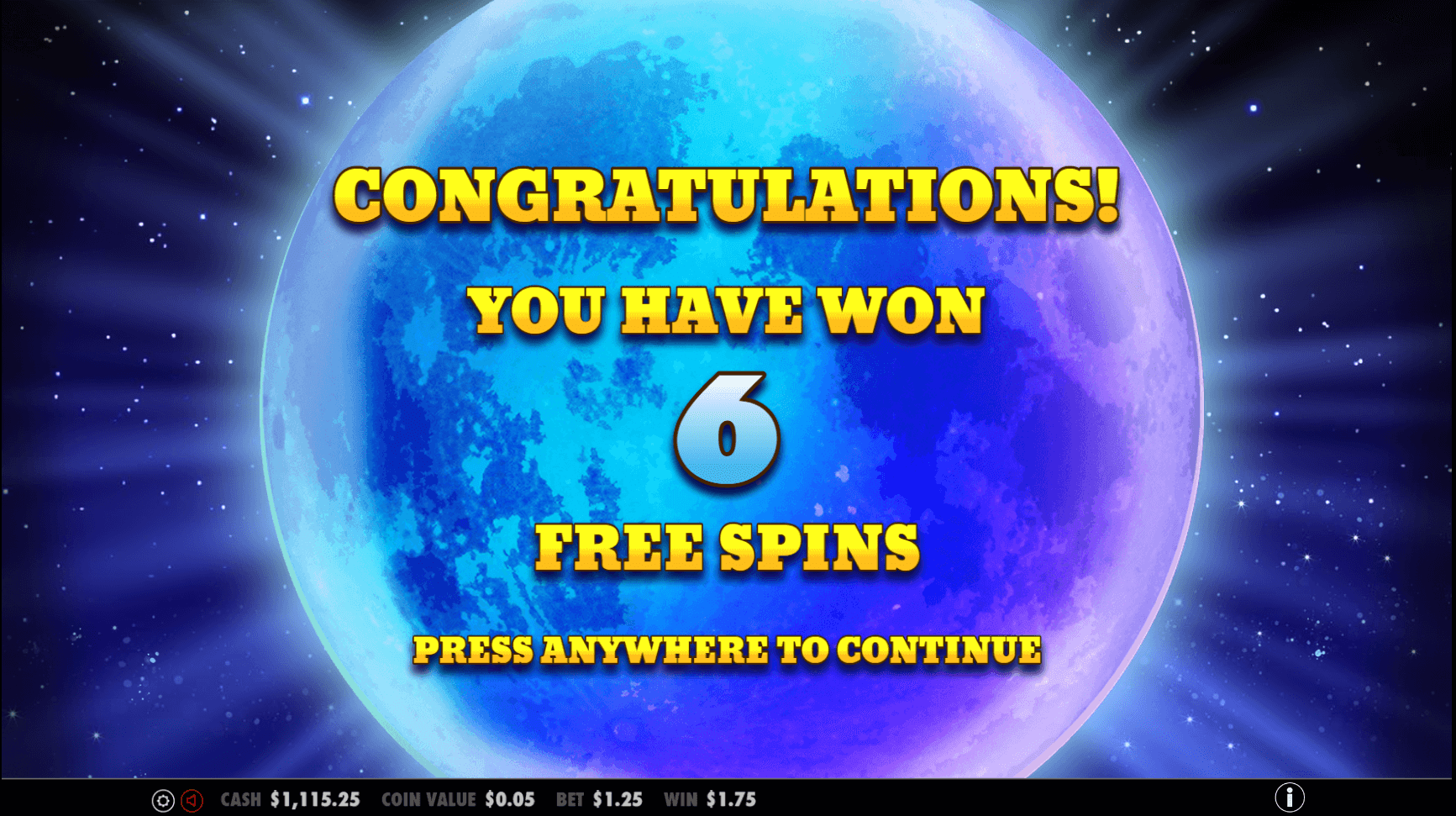 The second feature is called the Money Respin. This is where players can win some serious cash!

If the full moon money symbol lands in six or more positions at the same time, the camera pans up to the moon and the Money Respin feature begins. All money symbols will stick in their positions and the other symbols disappear.

Before each spin, the money symbols take a random predefined value or either the Mini or Mega Jackpot. Although these jackpots look similar to progressive jackpots on other slots since each prize is positioned above the reels, they’re actually fixed. The Mini Jackpot awards 30x the total bet and the Major is 100x the total bet. 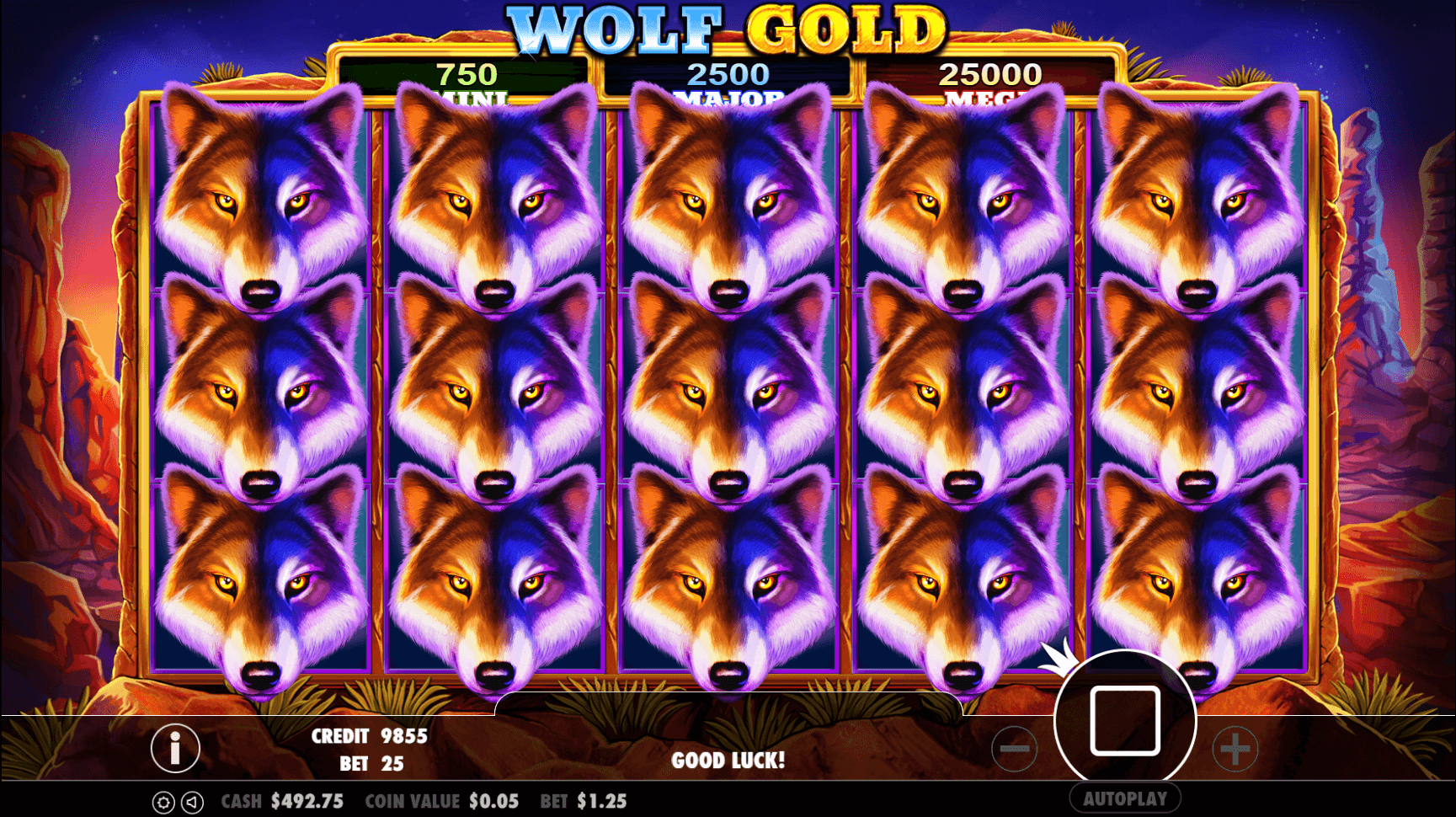 Players start the feature with three respins. During each spin, only the blank positions spin. If a new money symbol lands, it too sticks in position for the rest of the bonus round and the remaining respin counter will reset back to three.

The special feature ends when all symbols have been replaced with full moon cash symbols or the player runs out of respins. In the former case, players will drop the Mega Jackpot and receive an impressive 1,000x the total bet!

There are 25 fixed win lines on the Wolf Gold online slot. Whilst players must always use the maximum win lines, they can choose how many coins to bet on each, as well as the cash value of each coin. With each value set at its lowest, players will bet just 25p per spin. Meanwhile, the maximum cost of a single spin is £125.

Visually and sonically, the Wolf Gold online slot is a winner. If you’re lucky enough to trigger the game’s special features, it might not only make for a thrilling online gambling experience but also a lucrative one too!

Animal lovers who are partial to a punt might love this one by Pragmatic Play. If you don’t want to play Wolf Gold slot game with your own money right away, you can always try for free on the Wolf Gold demo slot at PlayOJO first too.

Megaways Wolf Legend by Blueprint Gaming. This online slot features almost the same cast of characters as the Wolf Gold slot game, only with a non-standard reel layout and a host of exciting special features – including an unlimited win multiplier!