If ever a game tapped into the zeitgeist, our Immortal Romance slot is it!

Released by Microgaming in 2011, this tale of paranormal passion has become a timeless hit that will still be thrilling new slots players in several vampire lifetimes.

Microgaming is the global powerhouse responsible for Mega Moolah, Avalon, Thunderstuck 2 and Jurassic Park, to name just a few. With Immortal Romance, they’ve shown once again they can make original content that’s as compelling as any branded slot out there.

Immortal Romance was ground-breaking for more than 1 reason, too. It’s not just packed with unique and incredibly fun bonus games. They’ve wrapped them up in an epic fantasy saga complete with theme, backstory and bespoke songs.

Microgaming went far beyond the usual process to craft this piece of casino top games history and it’s no surprise that it now has a cult following all of its own. Let’s sink our teeth into this slot’s juicy flesh and see what lies beneath! 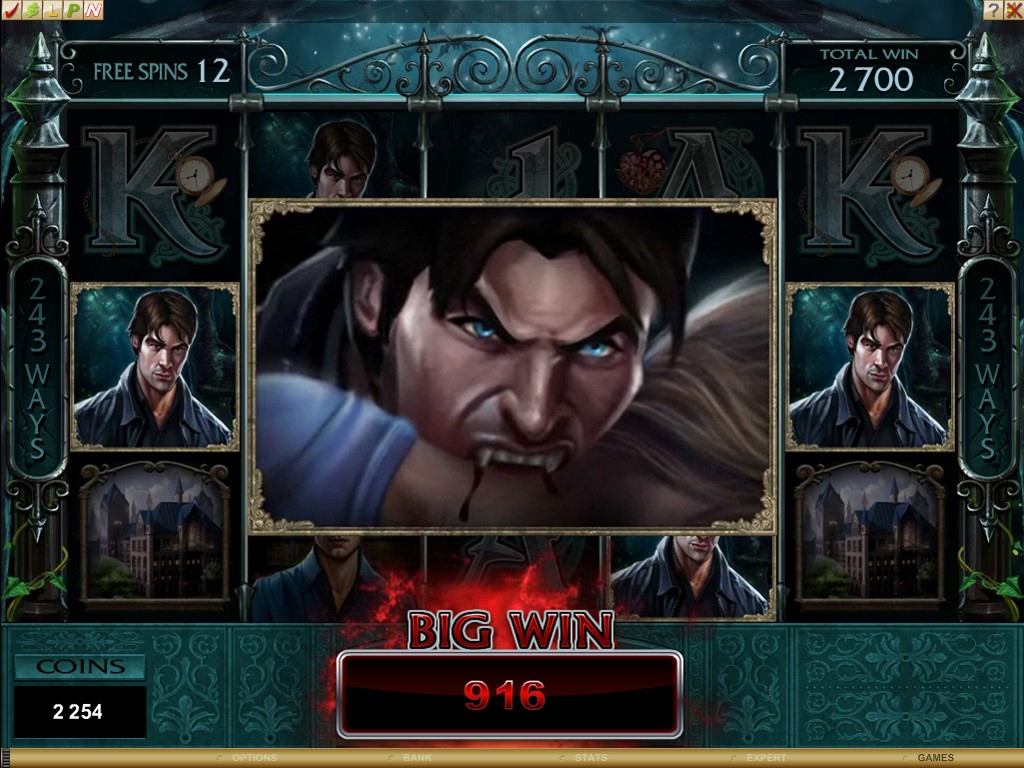 Our Immortal Romance slot review kicks off with the most striking aspect of the game, the theme. Officially this is a “Dark tale of forbidden love and intrigue with a haunting soundtrack”. Pretty fancy for an online slot machine! Can it back that up?

Yep! From gory graphics to tried and tested supernatural iconography, narrated backstories and a soft-rock opera soundtrack, Immortal Romance’s design is inspired. And it still looks amazing almost decade later. How many slots can you say that about?

One glance and you know where they’re going with this one. Dracula, Interview with a vampire, Blade, True Blood. This game pays homage to all of the fantasy horror classics, but above all to Twilight, in whose heyday Microgaming shrewdly chose to release this slot.

The dark and moody theme makes this slot the perfect choice for your next after-dark slotsplay sesh! From the gothic architecture to the stormy nights, haunted house, blood-soaked fonts and brooding looks, Immortal Romance lays it on thick.

Interestingly, we’ve got modern characters in a kind of medieval gothic era, but it prevents Immortal Romance from feeling too ‘period drama’.

Immortal Romance has such a dramatic narrative and so much depth to the characters that we sometimes forget its even a slot! Let’s start with heroes, villains and their stories.

Sarah is our game’s heroine. A 37-year old medical academic, stunning Sarah is searching for the secret to stop the ageing process and finds it in a vampire called Michael. As the tale’s star, she awards both the biggest wins (500 coins) of the 4 character symbols and the best Chamber of Spins

Michael is your run-of-the-mill 800-year old vampire heartthrob who has enabled Microgaming to be the first game studio to include molecular phylogenetics in a slot machine theme. That will never happen again. Five Michaels are worth 450 coins and he comes with a great Rolling Reels™ feature bonus.

Troy is the vampire playboy villain who clearly has the most fun, not least with his vampire bats bonus.

Amber is a witch and Sarah’s best mate. Together the quartet add another layer to the Immortal Romance video slot, even if you’re not too fussed about the ‘unseen bio-etheric energies’ and so on!

What about the other symbols? The instantly recognisable Immortal Romance logo is used for the Wild and you’ll score 1,500x your stake if you hit 5 of these.

A brass lion door knocker is used as the Scatter symbol which can net you up to 200x and also trigger the Chamber of Spins feature.

Rounding out the symbols are the usual Ace, King, Queen, Jack, 10 and 9, all styled in gothic font befitting of the theme.

This isn’t a slot - it’s Twilight The Musical! Get past the mystical background muzak and you’ll find some hidden gems.

Microgaming went so far down the Immortal Romance music rabbit hole they emerged with an industry first; a 10-track professionally recorded soundtrack including rock ballads for each character!

You’ll only hear these during their respective Chamber of Spins bonus features, so get playing (try the Immortal Romance demo for free) and crank up the vol. 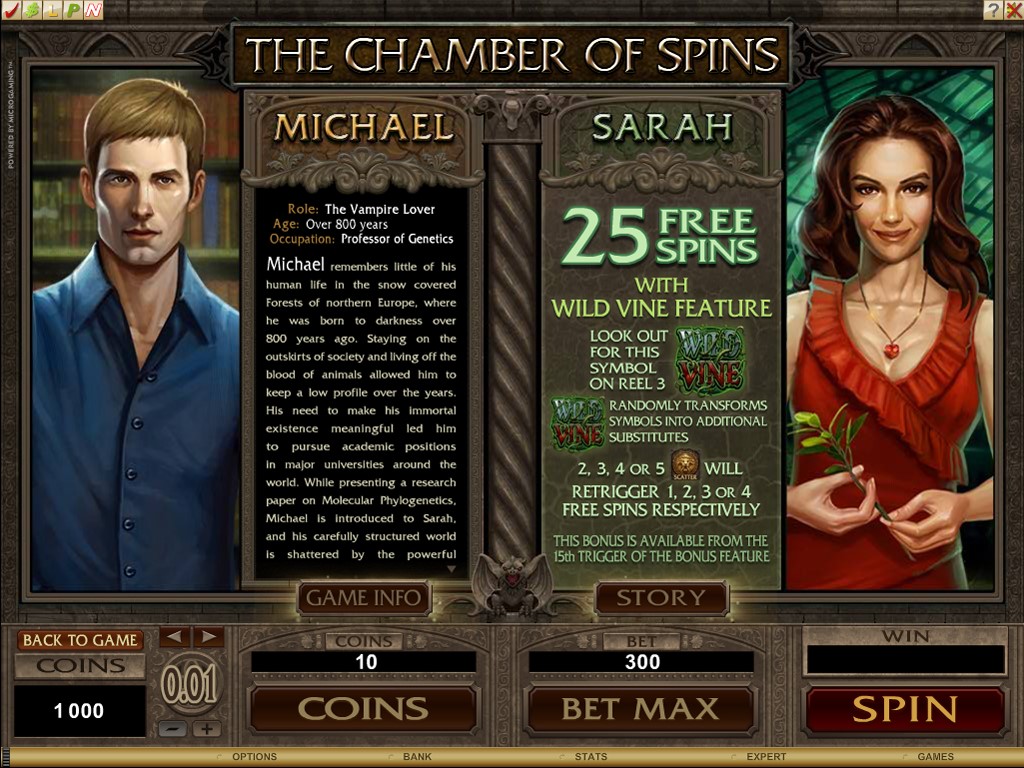 There are some serious numbers lurking beneath the cinematic façade. Immortal Romance is a 5 reel, 3 row slot with a fixed 243 ways to win. That’s achieved by enabling winning symbol combos to appear anywhere on adjacent reels rather than within 1 line in the normal way.

Despite the modest wagering limits, Immortal Romance’s 243 Ways mechanic and some repeatable bonuses enable wins of up to $7,720 (what universe did that number come from?!) in the base game and up to $72,900 in the bonus games.

The Immortal Romance RTP comes in at 96.86% which is hard to beat, especially with the money back from every spin via OJOplus!

So Immortal Romance slot machine has a fully immersive theme and some great numbers to back it up. But here come the real stars of the show….

It’s hard to believe this game has been around for years and yet still competes with the best slots to play when it comes to features. Let’s start with Wilds….

Not content with simply offering Wilds, the Immortal Romance Wild symbol, which substitutes for all symbols except Scatters, also DOUBLES any win. Scarily good! 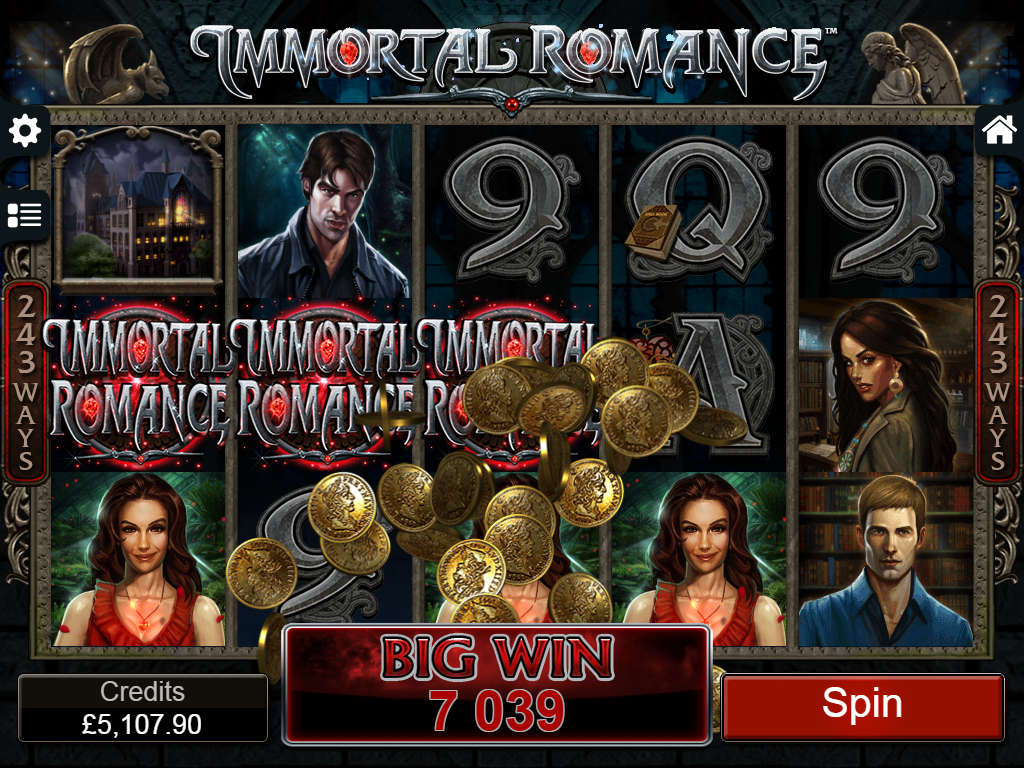 Triggered randomly during any normal spin, the Wild Desire feature can turn entire reels Wild. Land Wilds on all 5 reels and we’re in for some bone-chillingly enormous payouts. 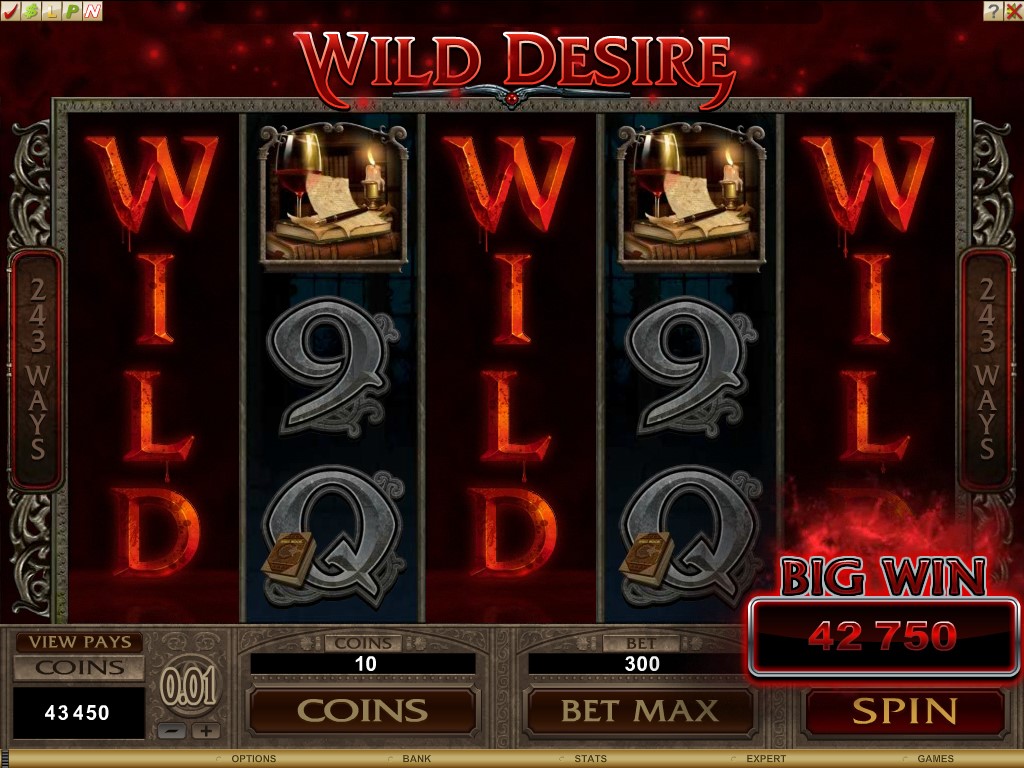 This is by far the Immortal Romance video slot’s best feature. Hit 3 or more Scatter symbols and you’ll trigger the Chamber of Spins feature where our heroes and villains lie in wait.

This feature is actually 4 different bonus games, 1 for each character. You’ll only be able to access Amber to begin with. Once you’ve triggered that bonus 5 times, you’ll unlock Troy. Five Troys later and you’ll unlock Michael’s mini game. Five of those and you’ll reach Sarah’s.

Each game offers Free Spins plus an extra bonus reward. Let’s go into each one: 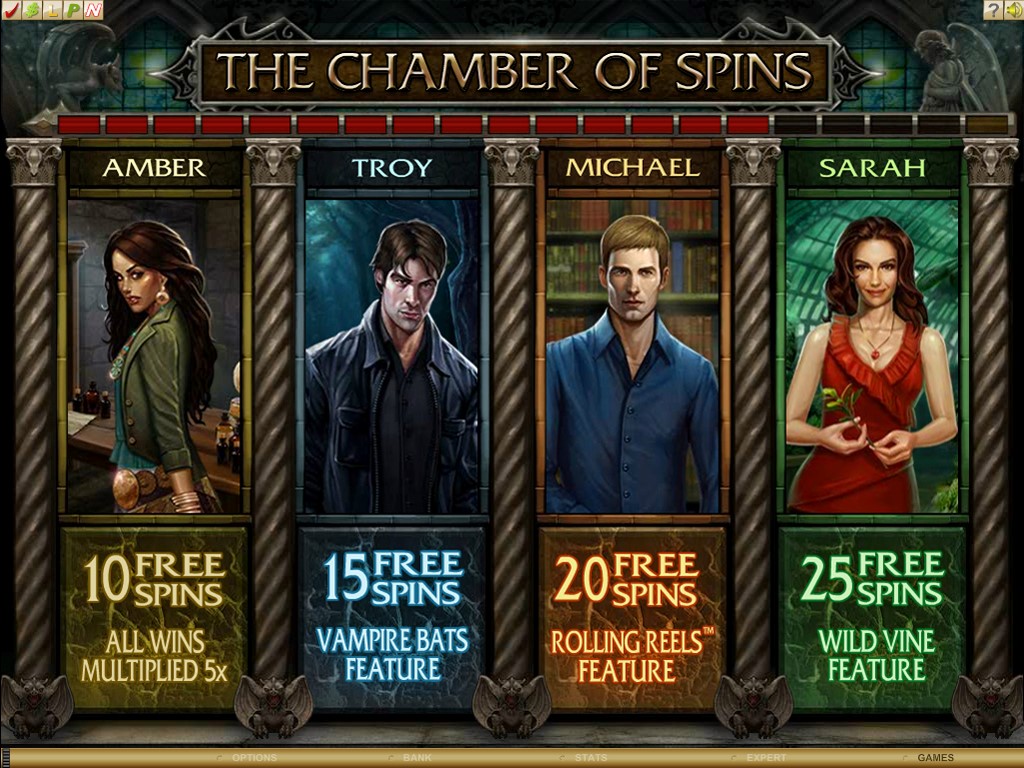 Amber: Amber’s bonus awards you 10 Free Spins with all wins multiplied by 5, and more Free Spins can be retriggered.

Troy: Here you’ll get an improved 15 Free Spins where vampire bats will drop 2x and 3x Multipliers (and even 6x if you get more than 1) on the reels. Better than a pile of guano eh? No retriggered Free Spins here though.

Michael: This time you get 20 Free Spins and the added juice of the Rolling Reels™ feature. Here, consecutive wins boost the multiplier from 2x up to 5x.

Sarah: Play your way to the last bonus and you’ll receive 25 Free Spins. On the 3rd reel, you may also get some Wild Vine symbols which turn other symbols wild and trigger up to 4 more Free Spins. Expect fireworks if you get this far! 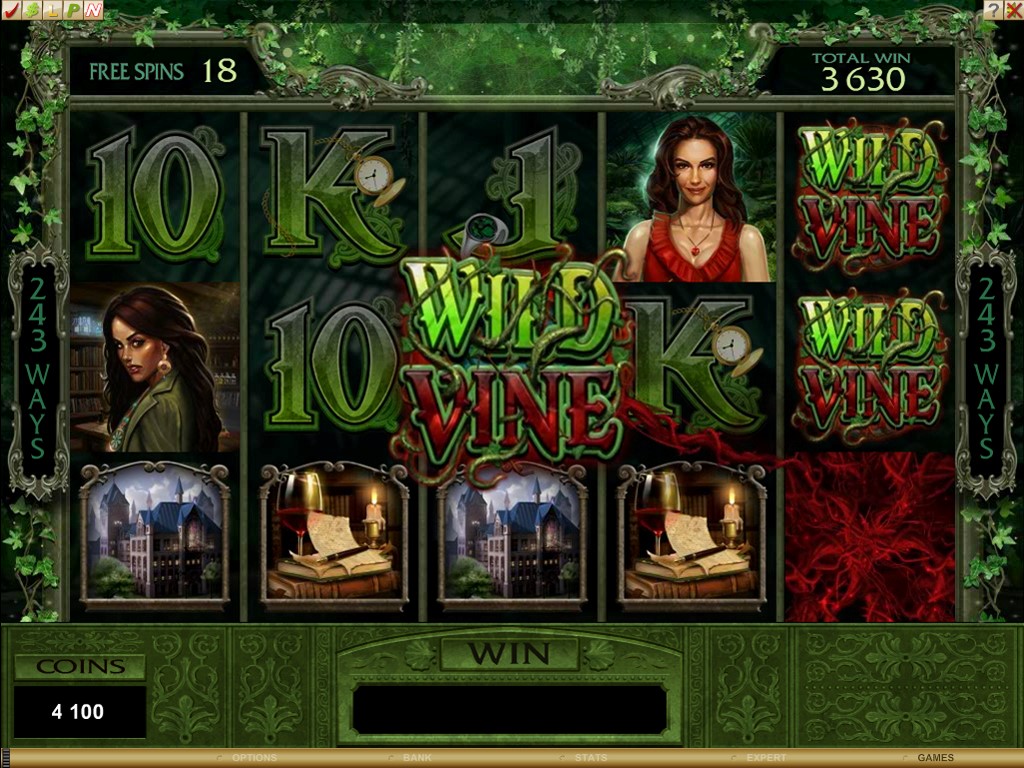 Ever heard someone banging on about ‘immersive’ UK online casino games? This is what they mean!

Immortal Romance is frighteningly good on any device, be in desktop, tablet or phone. You can try it for free right now at the fair casino or get started on the hunt for grisly wins from just 30p per spin.

Thunderstruck II – another stunning piece of fantasy slot design that also gives you 243 Ways to win. One of the most popular slots ever, it won’t leave you out in the cold. Go read about it amigo!