Greetings, OJOers! Today, we’re looking at a spinetingling slot by Quickspin that’s available here at PlayOJO. The Ghost Glyph slot is a suitably spooky casino game that’s all about trying to trap sneaky spirits. When they escape (and they always do), the mischief they make can result in some seriously spectral surprises! 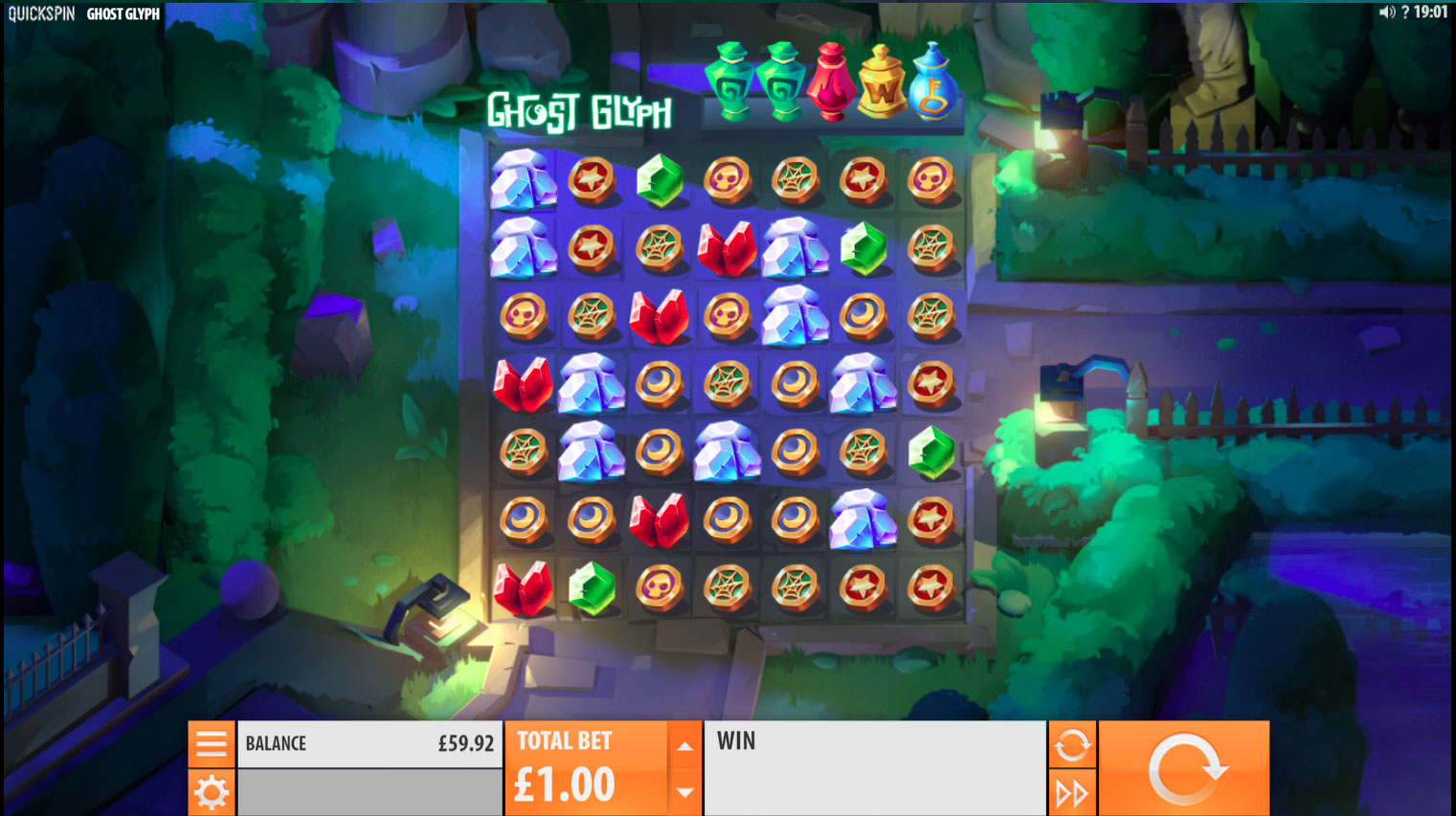 Whilst hunting for ghosts on the Ghost Glyph slot machine is pretty exhilarating, OJO’s got more up his supernatural sleeves for you all. He’s offering his newest players 50 Free Spins with no wagering when you make your first deposit. Nice one, OJO!

Although it’s all about ghosts, the game isn’t really all that scary. The artwork has a lot more in common with an RPG-style video game than it does a horror movie. The ghosts, powerful as they may be during gameplay, are actually pretty cute too!

Unlike many other online casino games, the action on the Ghost Glyph slot takes place on a seven by seven reel set. Rather than use win lines, this ghoulish game pays out when clusters of matching symbols land together. When they do, the winning symbols disappear – leading to all kinds of supernatural shenanigans!

There’s also an Auto Play function on the Ghost Glyph slot game. It’s really useful to speed up the action but be careful with it and always play responsibly!

After winning symbols disappear, those above them tumble down to potentially create more winning combinations. Whilst this is hardly a revolutionary feature (many online slots use a Tumbling Reels feature), it does have a rather special twist.

Before the symbols tumble, one of the spaces is filled with a Ghost Glyph. It’s a Wild Symbol and when it forms part of a winning cluster, the ghost flies off into one of the urns above the reels. Each of the different ghosts has its own special feature that it activates when it breaks free of its urn. Every time there’s a non-winning spin in the base game, a new trapped ghost powers up! 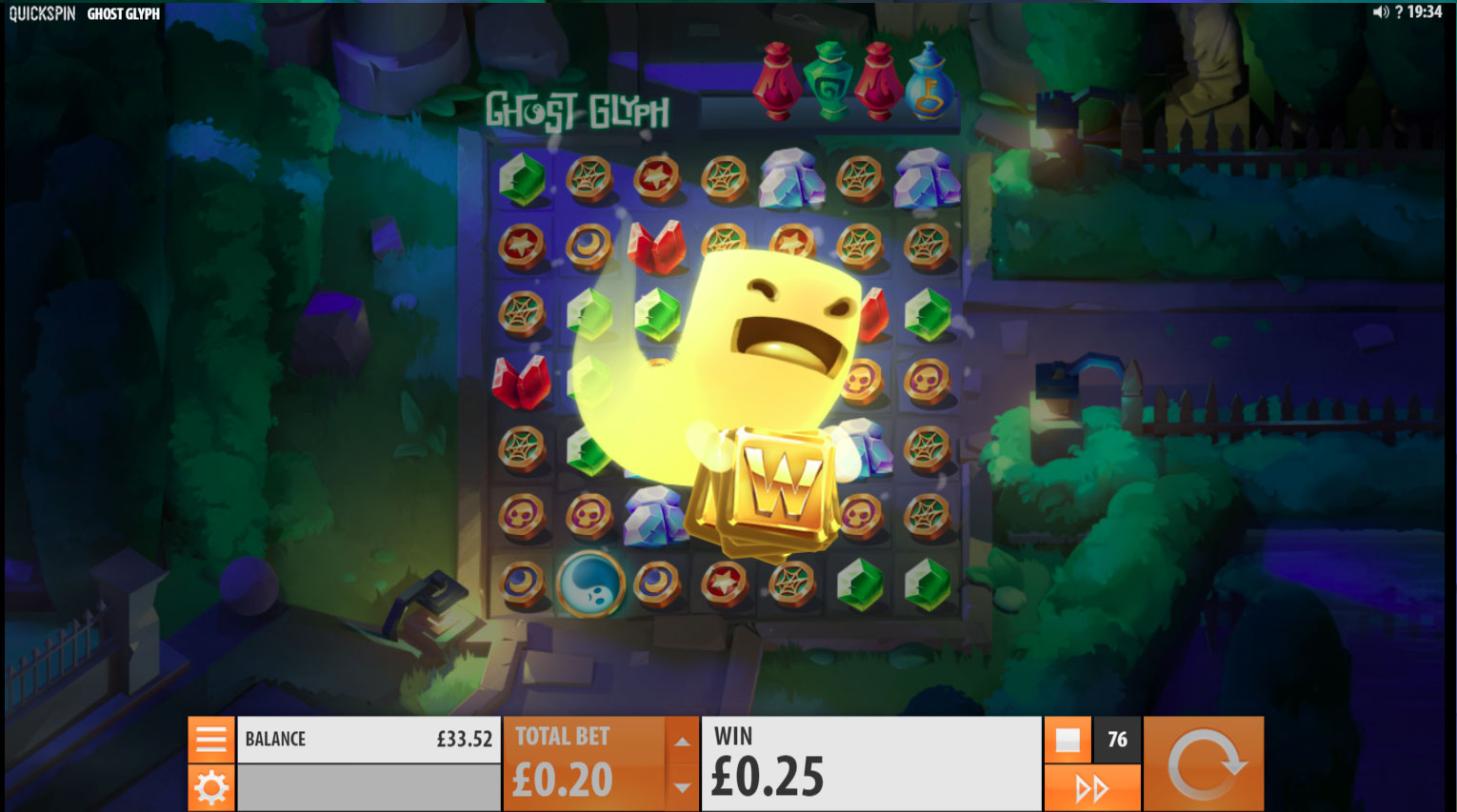 When the Red Ghost breaks free, it randomly picks one low paying symbol and takes it from the reels. The Green Ghost transforms all instances of a random low paying symbol into a different one. Upon its own release, the Yellow Ghost spawns between four and 10 Wilds and scatters them into random positions.

The final trapped ghost is blue. When it breaks free, you’ll receive eight Free Spins. You’ll get an extra three Ghost Glyph Free Spins each time the Blue Ghost escapes during the feature too!

If you manage to hit eight consecutive reel tumbles, you’ll fill the Paranormality Meter to the side of the reels. This triggers the Massive Wild feature. The first level creates a pair of two by two Haunted Wild Symbols.

To change your stake per spin on the Ghost Glyph online slot, just click the Total Bet option to the bottom of the reels. The lowest possible bet is just 20p and the highest is £100. 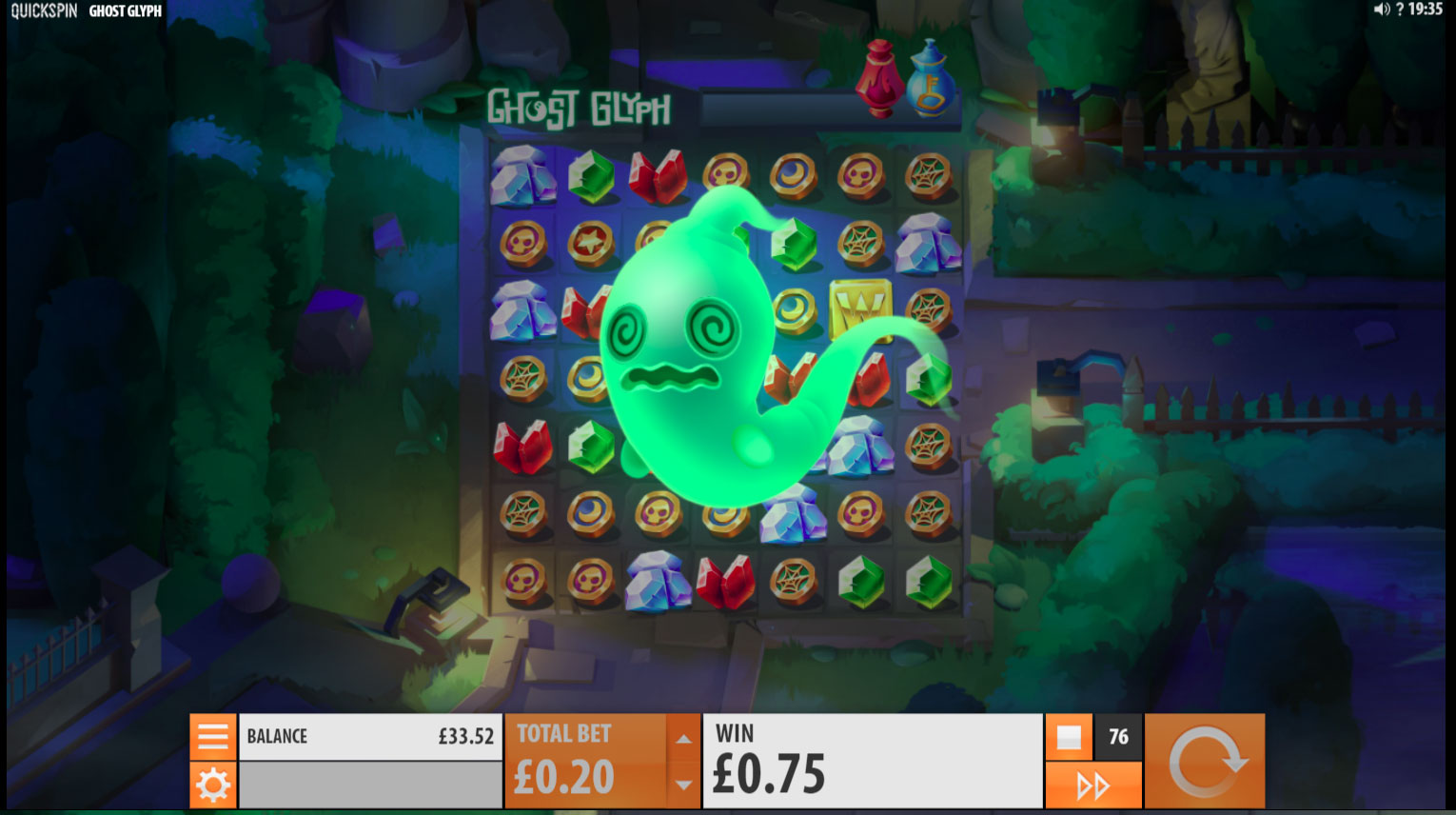 For those of you spooked by the thought of jumping right in and trying the game for real, you can play the Ghost Glyph slot demo first. OJO’s thoughtful like that, you know?

If you’re looking for a frightfully fun casino game that’s loaded with fiendish features, you can do much worse than trying the Ghost Glyph slot game. OJO particularly enjoyed the fresh take on Tumbling Symbols that QuickSpin incorporated here. If you’re interested in seeing for yourself, you can play Ghost Glyph in the UK today at PlayOJO.

Ghost Pirates by NetEnt. Another game steeped in the paranormal, this time we’re aboard a mighty vessel crewed by sneaky, seafaring spirits. Although the art style will immediately grab most players’ attentions, the real draw here is the potential to win 25 Free Spins with a 3x multiplier!