Hey there, amigos! Today, we’re preparing to do battle with some of the most fearsome warriors of the Roman Empire. Victory doesn’t just spare us from death at the whim of an almighty emperor either – it can make for jackpot wins!


What could be more thrilling than engaging in a duel to the death in front of a bloodthirsty crowd? Well, 50 Free Spins perhaps. That’s what OJO awards all his newest pals who deposit with us after creating an account. Nice!

How the Arena of Gold Slot Looks

The action on the Arena of Gold slot game takes place within an Ancient Roman coliseum as mighty gladiators prepare to do battle. 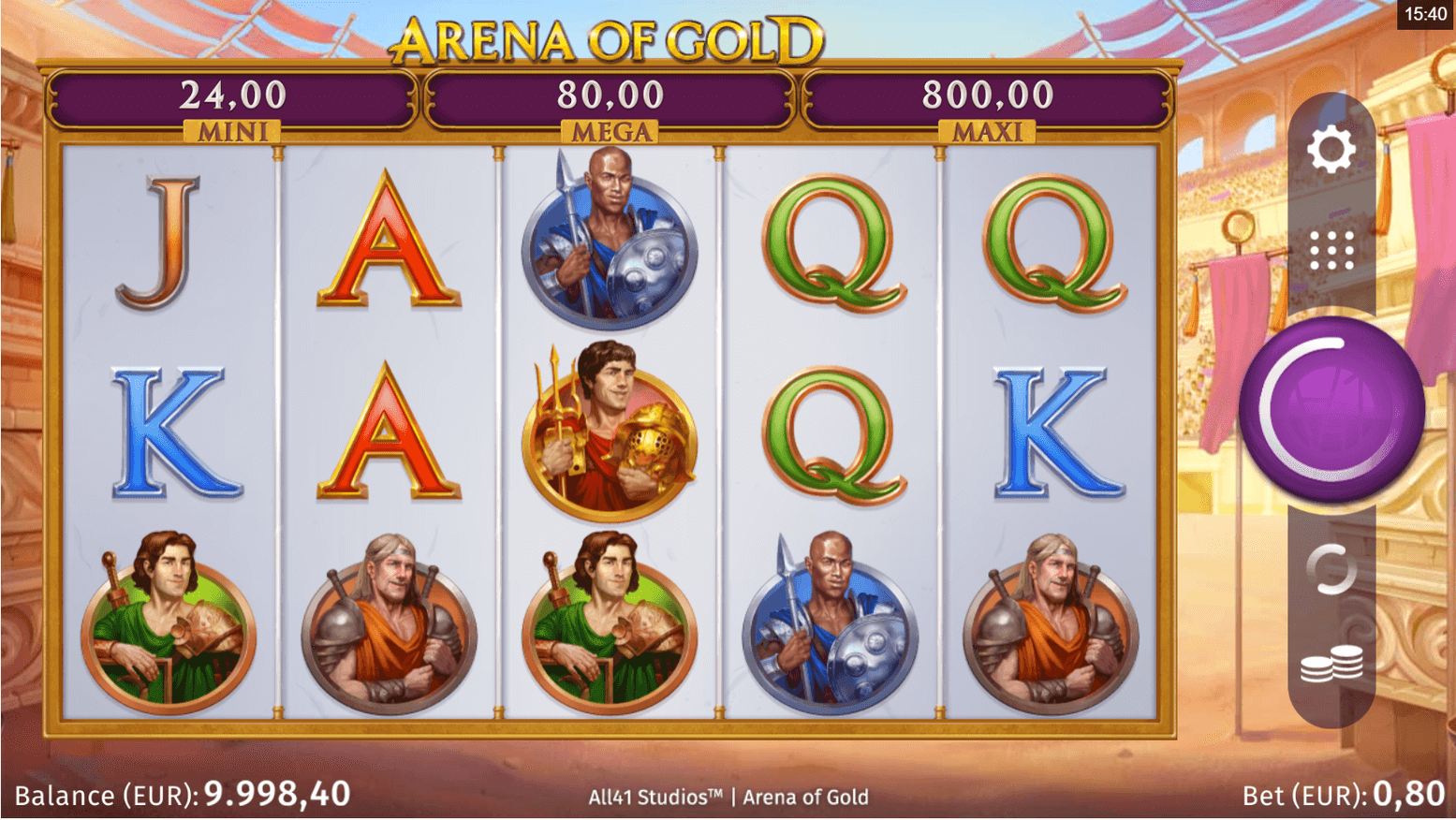 In addition to the game’s lower value symbols that are taken from the upper end of a standard deck of playing cards (a trait common on online casino games), the reels are adorned with noble warriors looking to impress the Emperor, which serves as the title’s Wild Symbol.

The Arena of Gold online slot uses a reel layout that’s typical of many online slots. Five reels and three rows of symbols create a total of 25 fixed win lines. When you match three or more symbols along one of the lines, you’ll get paid out. 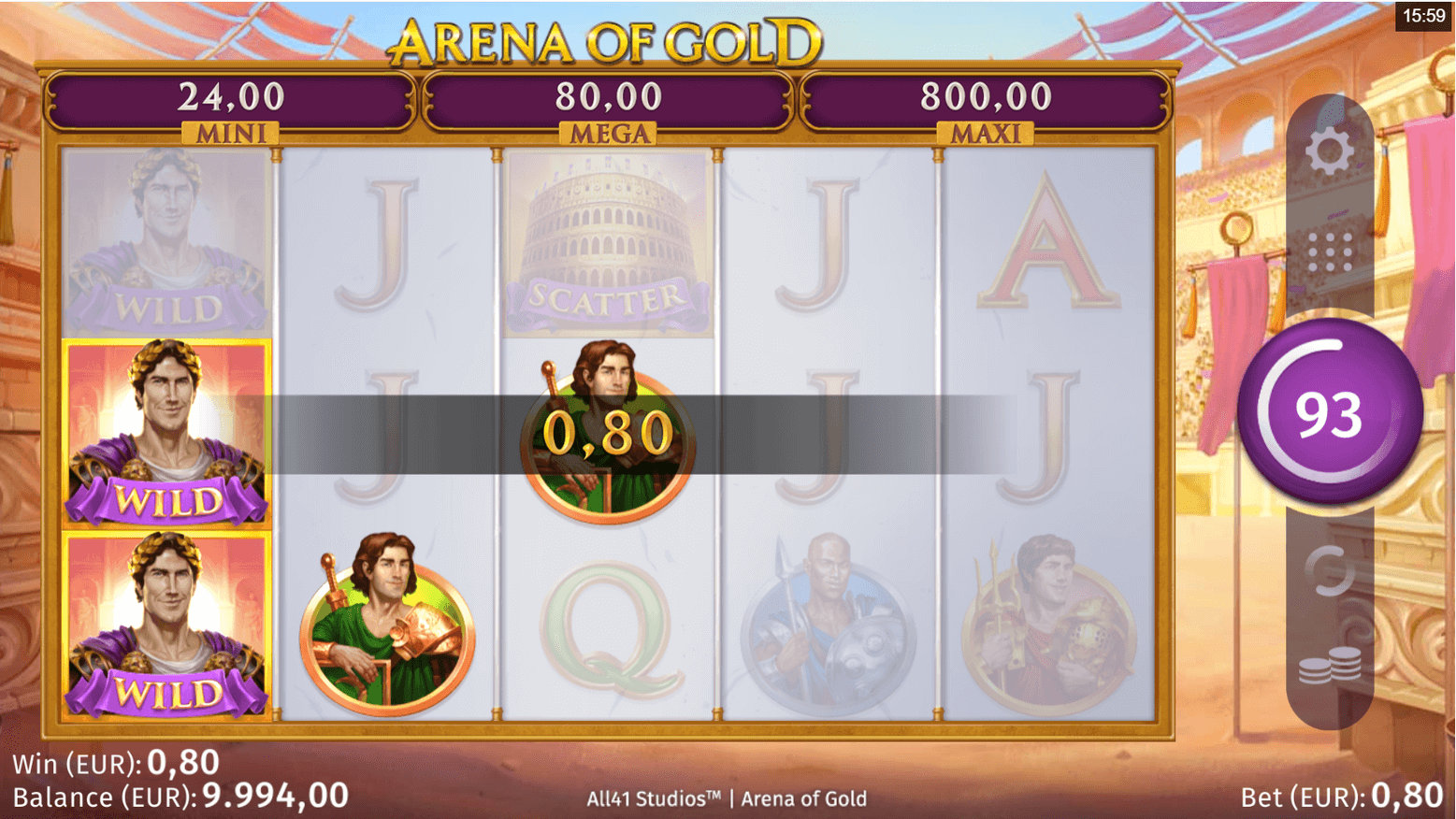 There’s also an Auto Play function on the game. It’s great for speeding up the action but use it with caution and always play responsibly.

The Scatter Symbol on Microgaming’s Arena of Gold slot is the grandiose coliseum where our combatants face off. If you manage to land three of them on reels one, three, and five at the same time, you’ll trigger the Arena of Gold Free Spins feature.

You’ll get five Free Spins. During the feature the central three reels merge into one giant reel displaying only oversized symbols.

These count as nine smaller symbols (all except the Scatter, which is only considered as one). Needless to say, with so many matching symbols guaranteed on the middle three reels, the chances of dropping a decent win increase dramatically.

The Arena of Gold Jackpot is awarded during the Golden Respin feature. If you manage to land six or more of the Golden Coin Symbols anywhere on the reels, the other symbols disappear and the bonus mode begins. 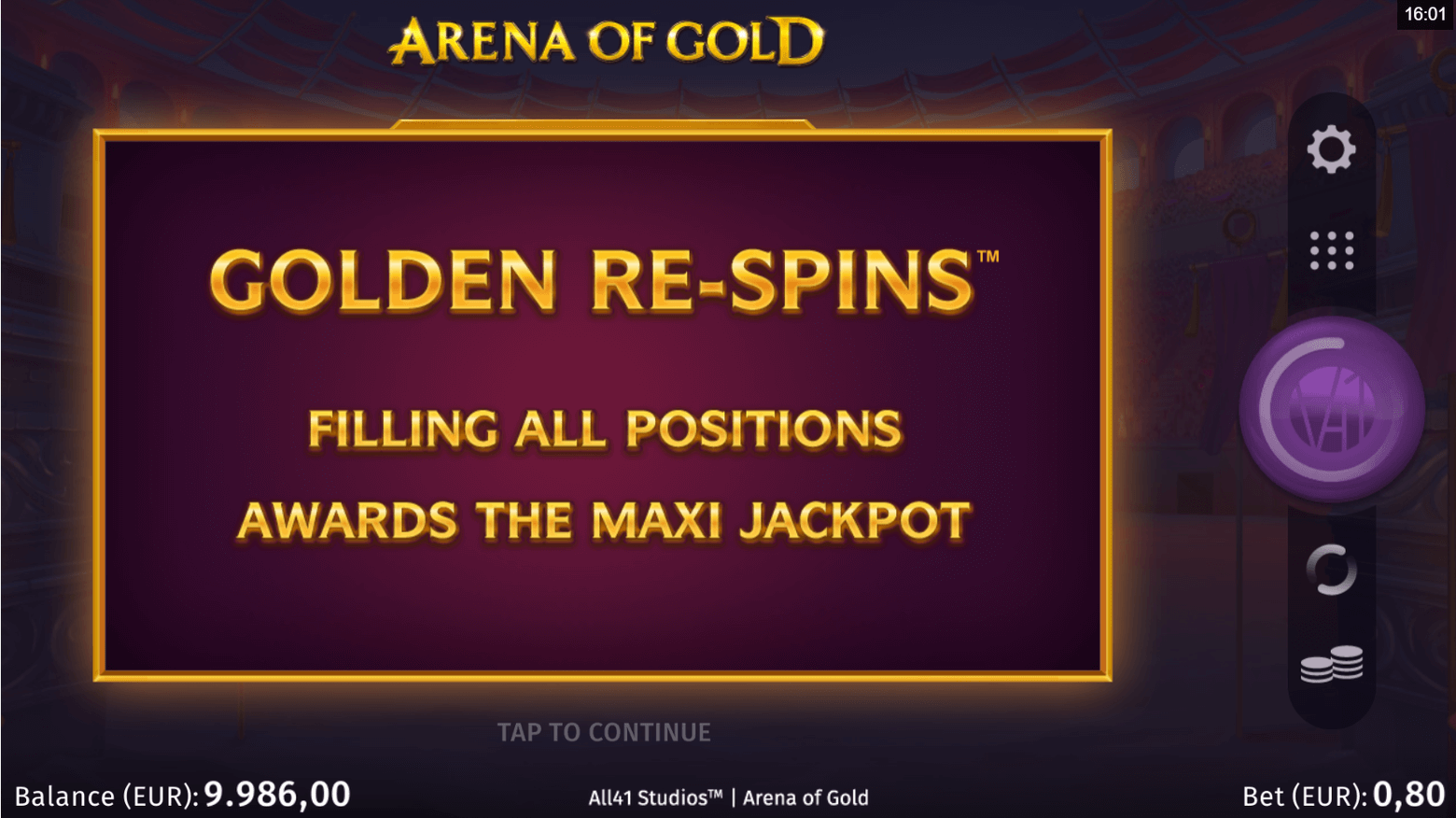 When the feature starts, you have three Respins. Each additional coin that lands on the reels resets the counter. The aim is to fill as many positions as possible with Golden Coin Symbols.

The Coin symbols each have either a Multiplier Prize, the Mini Jackpot, or the Mega Jackpot. Only by filling the reels with coins will you be awarded with the Arena of Gold Maxi Jackpot of 1,000x the total bet.

Just hit the stack of coins to the right of the reels to adjust the total amount you bet per spin on the Arena of Gold slot machine. Bet sizes range from a minimum of just 10p right up to an upper limit of £100.

Although 10p per spin means that the Arena of Gold online slot caters well to players with smaller bankrolls, not everyone is comfortable betting for real right off the bat. That’s why OJO offers you the chance to play for free first. Just load up the Arena of Gold slot demo to try it out without risking your own cash.

OJO loves jackpot slots on which you can win some serious moolah on a single spin. Microgaming’s Arena of Gold delivers just that. If historical combat sports or instant win jackpots are up your street, you can play the Arena of Gold slot in the UK at PlayOJO today.

Play ‘n’ Go’s Game of Gladiators. As the name suggests, this one’s also about the mighty warriors of the Roman Age. With innovative special features and a ferocious tiger to do battle with too, Play ‘n’ Go’s take on the gladiator slot isn’t for the faint of heart. But as they say, fortune favours the brave!