Howdy, OJOers! Are you ready for a blast from videogaming’s past? Thunderkick’s Arcader slot is just that. It’s a game that pays homage to the kind of classic titles you’d find in an old arcade and it’s loaded with special features that really keep the action fresh. 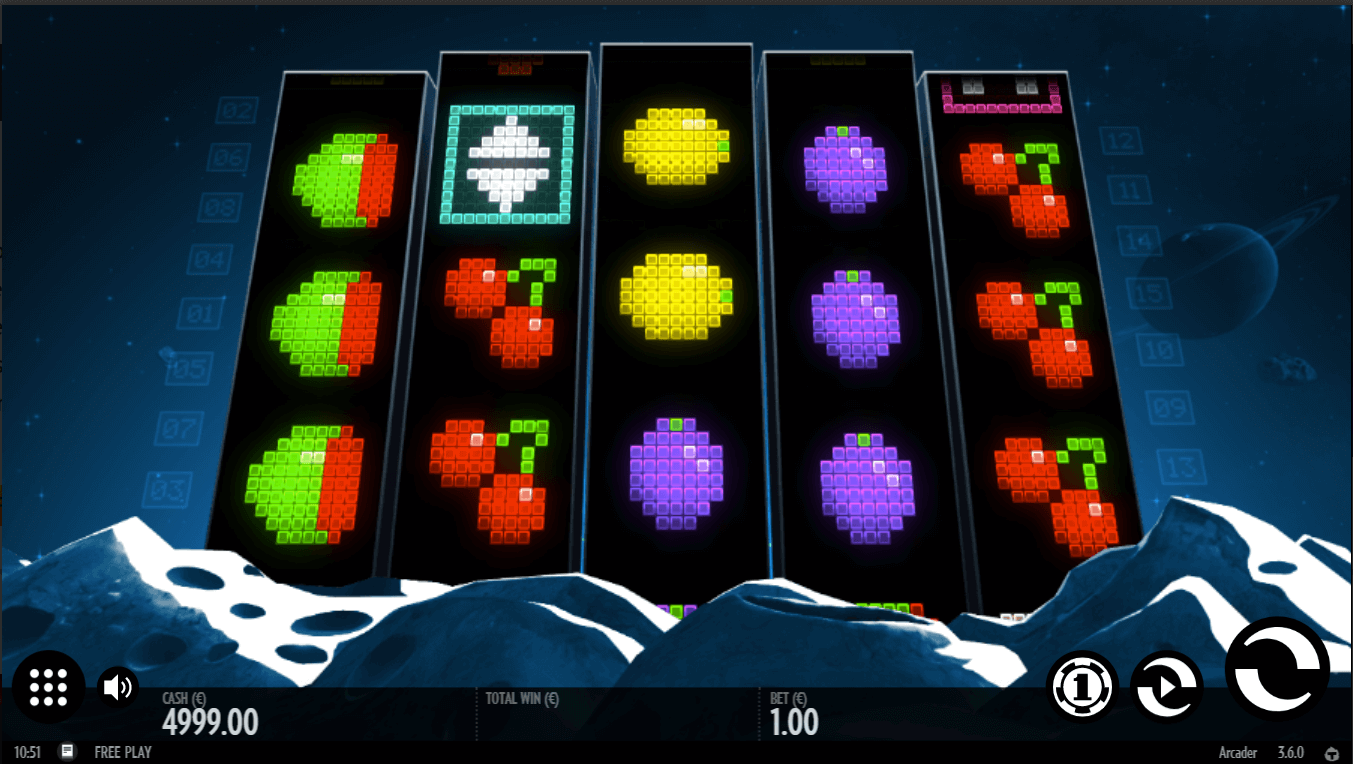 Retro videogaming is pretty popular these days and makes for a great slot theme. However, if the Arcader slot alone doesn’t excite you enough to join us at PlayOJO, 50 Free Spins with no wagering might well do. Just signup, make a deposit, and play the Arcader slot in the UK with us today.

As the name suggests, the Arcader slot machine is inspired by the kind of videogames you’d find in a real old-school arcade. Think Space Invaders, Pacman, and all those other classic titles.

The symbols used on the Arcader slot are those commonly found on a vintage real-world slot machine – pieces of fruit, BARs, Lucky Number Sevens, etc. They’re all heavily pixelated to really give the title a feel of an ‘80s video game. Complementing the theme is the soundtrack. It’s composed entirely using 8-bit sounds, which creates a strong feel of an old-timey arcade game!

The action on Thunderkick’s Arcader slot takes place across a set of reels measuring five symbols by three. This creates a total of 15-win lines to match symbols along. Land three or more matching symbols on one or more lines and you’ll win a cash prize.

Thunderkick says the Arcader slot RTP rating is 96.1%. Meanwhile, you can win up to a maximum of 1,600x your total bet. 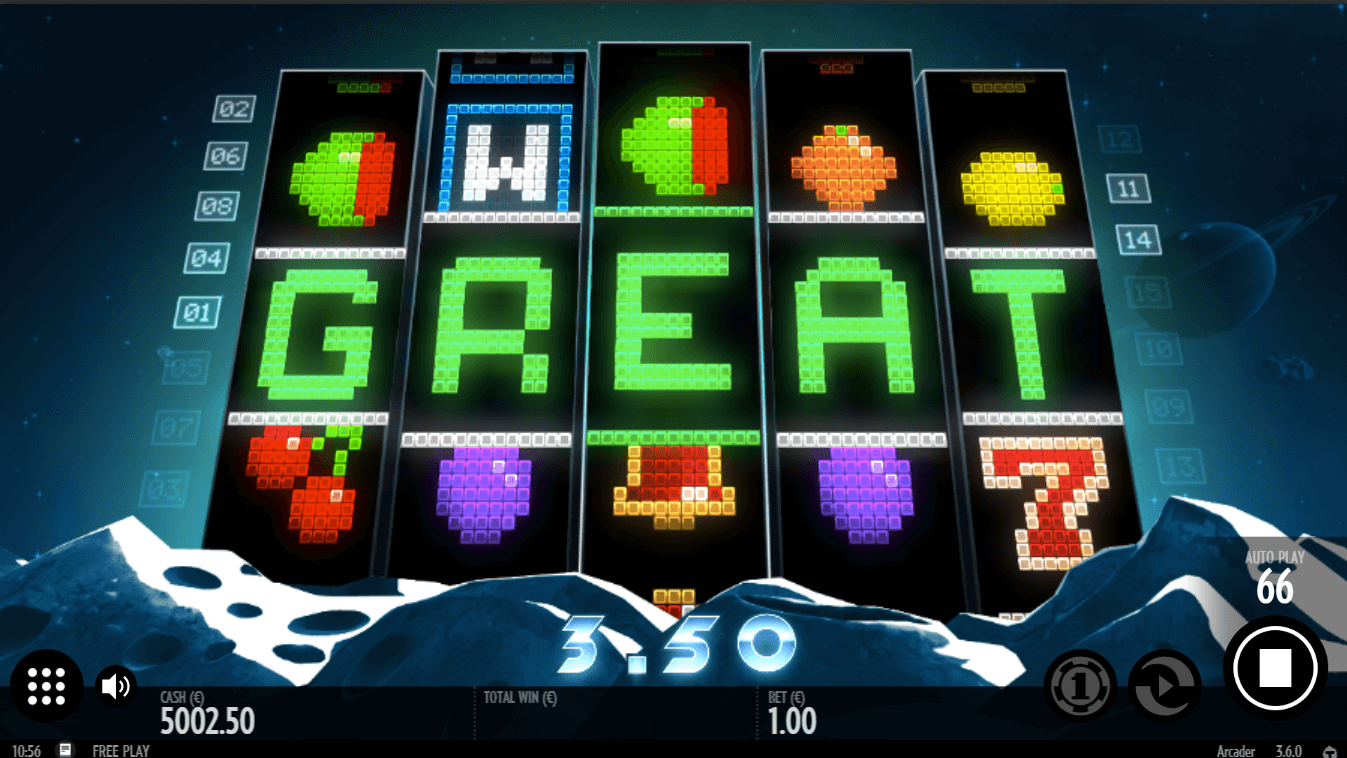 Like many other online slots, there’s also an Auto Play feature on the Arcader slot. Its inclusion really makes playing a mammoth session much easier, but we must remind you to play responsibly (you should always stay in control of your betting anyway though!)

The Expander Symbol on the Arcader slot is a pair of pixelated arrows pointing up and down. When it lands on the reels, it expands whichever symbol will create the best winning combination to cover the whole reel. This means you’ll get paid out wins along extra pay lines!

Like many of OJO’s favourite online casino games, the Arcader slot game features a Free Spins mode. You’ll trigger it if you land three or more Bonus Scatter Symbols anywhere on the win lines. 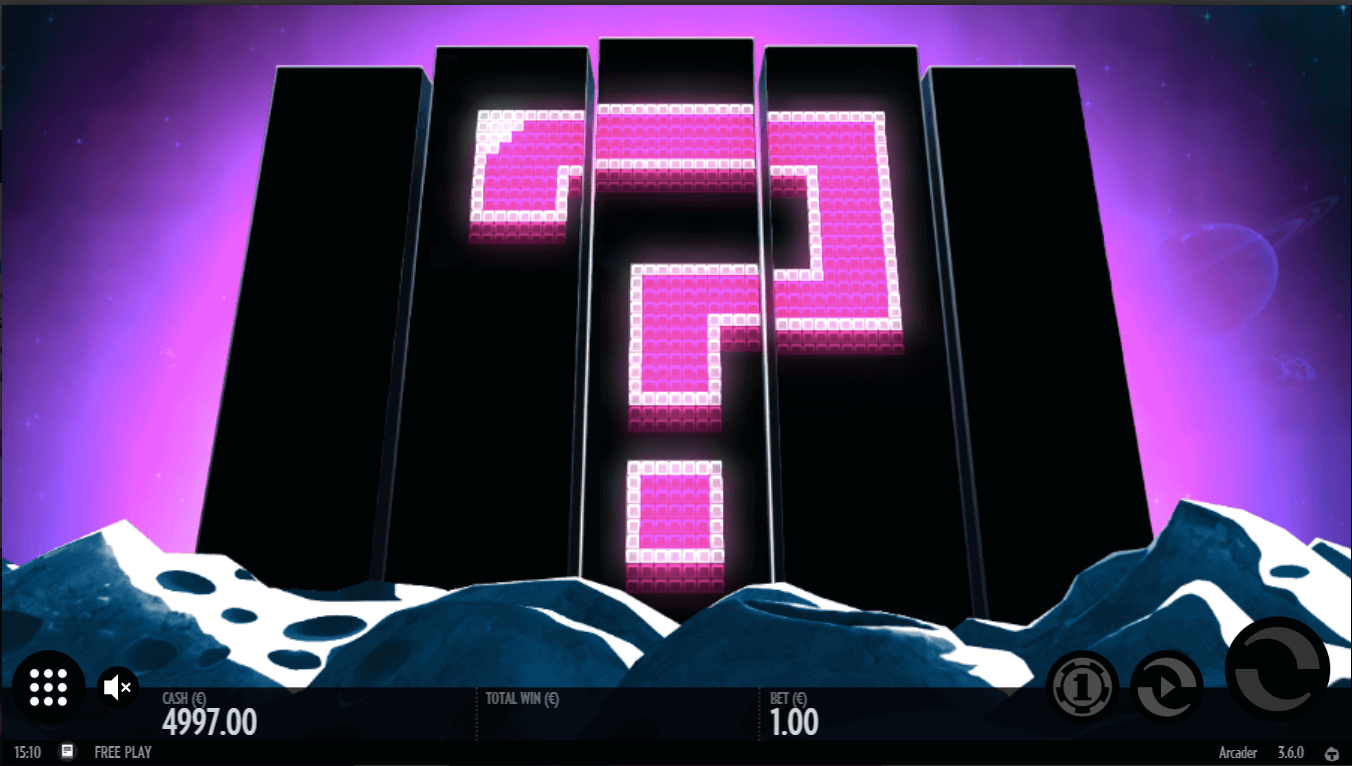 If you manage to trigger the Bonus Game, you’ll get nine Arcader Free Spins. During the feature, Sticky Wild Symbols can land on the central three reels. These will stay stuck to the reels until the feature ends.

The Arcader slot’s other special feature is the Mystery Game. You can trigger it by landing three or more of the Mystery “M” Symbols anywhere on the reels. Just like with the Arcader Free Spins, the more Mystery Symbols that trigger the bonus game, the greater the multiplier will be. This time three, four, and five Mystery Symbols will award 1x, 2x, and 6x multipliers respectively.

The Mystery Game involves picking boxes to reveal prizes. The above multiplier will be applied to the total winnings from the game. The game continues until you uncover a blank box or until there are no more boxes to open.

You can adjust your total bet using the option at the bottom of the reels. There are a total 14 different bet amounts. The lowest is just 10p and the highest is £100.

You don’t need to just take OJO’s word that the Arcader online slot is a cracker though. Here at PlayOJO, we host loads of free versions of the games we offer. Just load up the Arcader slot demo to try it for yourself for free before betting for real!

With its varied special features and a strong theme, it’s easy to see the appeal of the Arcader slot game. OJO particularly liked how true to the vintage arcade experience Thunderkick has made the title. If the game sounds like a winner to you, why not play the Arcader slot in the UK at PlayOJO today.

Arcade Bomb by Red Tiger. If the Arcader slot game has given you a taste for pixelated fruit, then this one is well worth a go. The Reel Bombs really make for some explosive action!