Annihilator Slot: Crank the Volume and be Ready to Rock

Howdy, OJOers! Are you ready to rock? Well, of course you are! Today, we’re looking at Play ‘n’ Go’s Annihilator slot – a game guaranteed to get all you metalheads moshing! 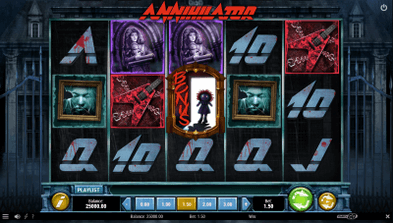 The Annihilator online slot is pretty exciting in its own right. However, it’s not the only thing OJO wants to tell you about. He’s also got some great news for any of his newest pals. If you sign up and deposit at PlayOJO today, you’ll receive 50 Free Spins with no wagering!

How Does it Look (and Sound)?


Play ‘n’ Go’s Annihilator slot machine is part heavy metal-themed, and part horror movie-themed. The action takes places in and around a suitably dark and mysterious haunted house and the higher value symbols are represented by creepy imagery from the house itself and the band.

Like on many online slots, the lower value symbols are the high value cards from a standard deck. In-keeping with the horror/rock theme, each is in the font of the band’s logo, and adorned with a splatter of blood.

Since the game is all about the Canadian thrash metal outfit, you can, of course, expect to hear some of the group’s repertoire when you play the Annihilator slot machine. You don’t just have to listen to the same track either. Hit the playlist button at the bottom of the reels to select from one of eight Annihilator tunes.

The action on the Annihilator slot takes place across five reels and three rows of symbols. These create a total of 10 fixed win lines. Wins are awarded for matching three or more symbols along them. 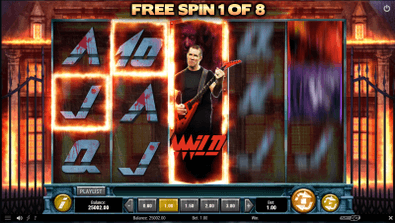 Play ‘n’ Go says the Annihilator slot RTP is 96.2% and the maximum possible win from a single spin is 5,000x the total bet. The game is considered high volatility too.

To help speed up the action, Play ‘n’ Go included both an Auto Play and a Turbo Spin function. Although these features are very common on online casino games these days, OJO still recommends using them with caution. Always play responsibly!

The In Command Feature can be triggered randomly on any spin. The Annihilator slot’s Wild symbol, represented by the band’s long-serving lead guitarist Jeff Waters, will expand to cover an entire reel.

If you win with the expanded Wild symbol, the game resumes as normal. If not, the reels spin again until you do hit a winning combination! The Wild Symbol remains in place until the Respin results in a cash prize.

If you’re lucky enough to land three of the Satan Scatter Symbols anywhere on the reels at the same time, you’ll receive eight Annihilator Free Spins. 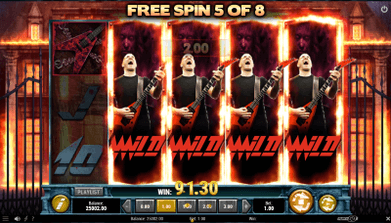 During the Set the World on Fire feature the game’s expanded Wild Symbol always lands on the reels. It shifts into a new position each spin and leaves behind a blazing trail. The symbols landing in the fiery squares will match each other. Appearing in conjunction with the game’s Stacked Wild Symbol, the feature can result in some seriously big wins!

Land three Bonus Symbols in any positions and you’ll trigger the Fun Palace Feature. You’ll be presented with a bunch of creepy looking dolls. Just pick one of them to be rewarded with either an instant cash prize or to trigger the Set the World on Fire Free Spins feature.

You choose how much to bet on the Annihilator slot game using a set of options at the bottom of the reels. The lowest possible bet per spin is just 10p. Meanwhile, the maximum is £100.

Whilst most of you lot will be happy to jump right in and start betting for real, OJO also offers his pals an Annihilator slot demo. This means you can play the Annihilator slot in the UK for free before betting any of your own money.

Annihilator is packed with exciting special features and is a great example of a modern virtual slot machine themed around heavy metal music. We know any fans of the band are going to love it but thanks to its varied gameplay, Play ‘n’ Go has created a game that’s highly playable regardless of your musical taste. See for yourself and play the Annihilator slot in the UK at PlayOJO today.

Sabaton by Play ‘n’ Go. The software company has put out loads of metal music-themed games in the last few years and this tribute to the Swedish war-metal pioneers will surely get a lot of love from fans of the genre.