Hey there, OJOers! Ever wanted to make off with the contents of a loaded bank vault but were too afraid of what the Old Bill would do if they caught you? Well the Action Bank Plus slot is a heist with absolutely no legal repercussions! 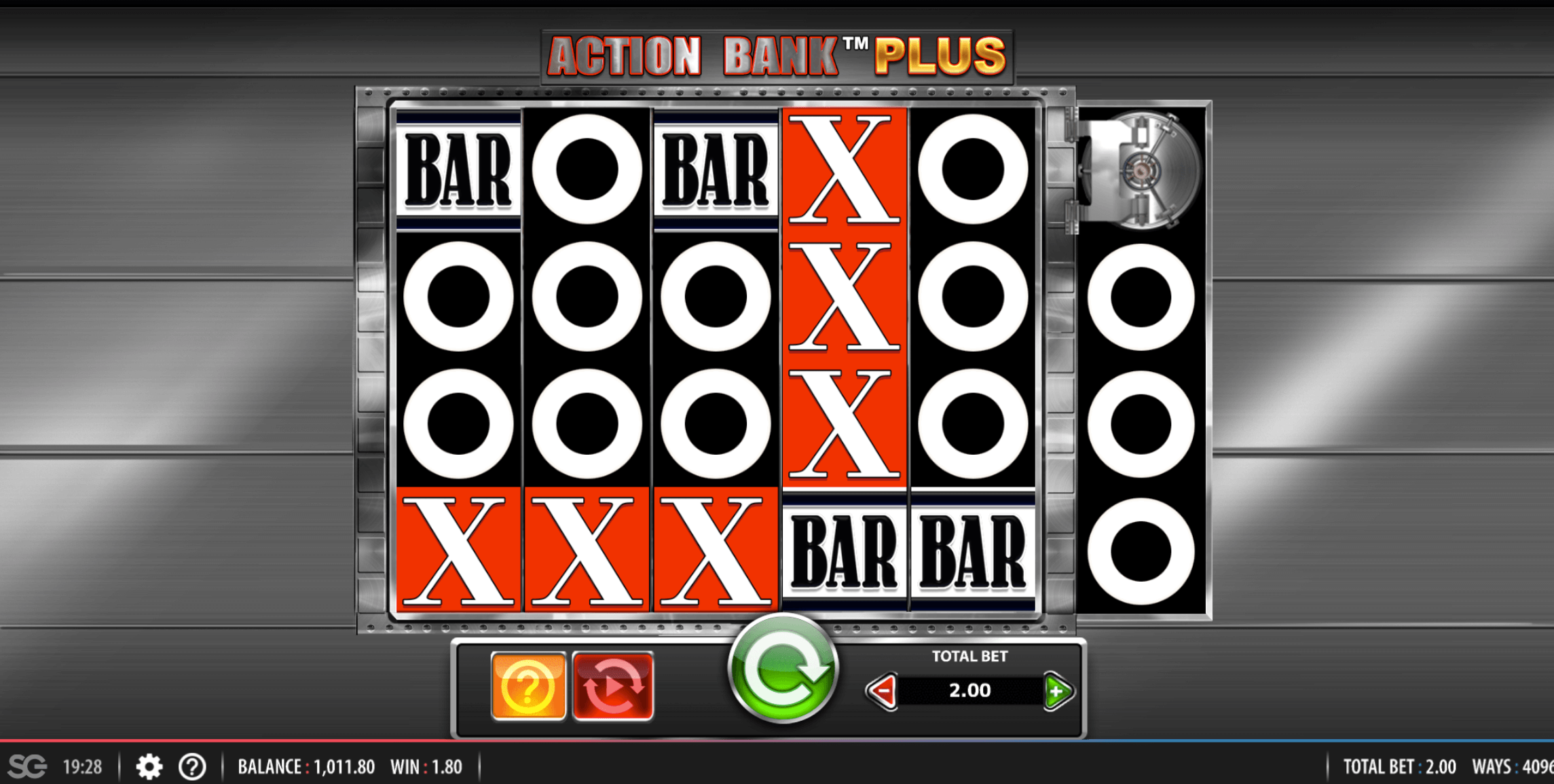 SG Digital’s Action Bank Plus slot game is certainly not the prettiest casino game OJO’s ever seen but it makes up for that in terms of its gameplay. Set against a grey background, the slot is sparse on both animation and art work but big on action.

The Action Bank Plus online slot has just three paying symbols – an X, BAR, and a Lucky 7. It also features a non-paying symbol, as well as a Wild symbol and the Vault symbol. The latter of which triggers the game’s bonus feature.

The action on the Action Bank Plus slot machine takes place across six reels and four rows. Unlike many other online slots, there are no win lines. Instead, prizes are awarded for matching symbols on consecutive reels. This creates 4,096 potential winning combinations!

SG Digital designed the Action Bank Plus slot with a 96.04% RTP rating and it’s capable of awarding 1,000x your total bet. OJO would like to take the opportunity to remind his amigos to always play responsibly when using all his online slots!

Sometimes when four of the game’s non-paying nought symbols land on the sixth reel, one or more of them will randomly transform into the game’s Vault symbol. If you manage to fill the entire reel with Vault symbols, you’ll trigger the Action Bank Plus Free Spins feature.

Before the bonus begins, you have to select one of the Vault symbols. This reveals either four, eight, 12, or 16 Free Spins. The game will then add one extra Free Spin for every nought symbol that landed on the spin that triggered the feature. Filling the sixth reel with Vault symbols a second time will retrigger the bonus too. 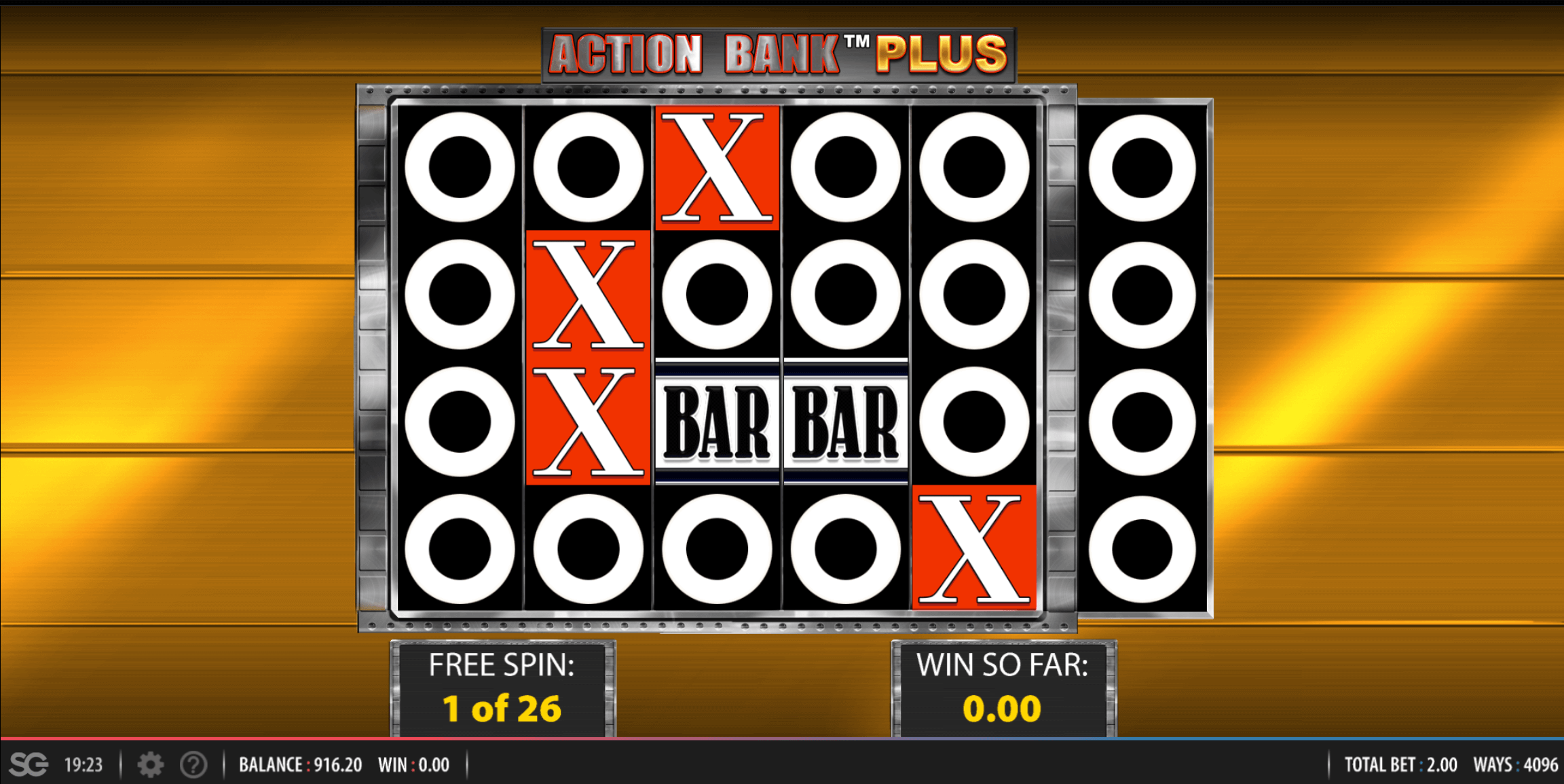 As well as the background changing into a fetching gold colour during the Action Bank Plus Free Spins feature, special double symbols are added to the first reel. These count towards two potential ways to win and obviously make for potentially bigger pay outs.

SG Digital’s Action Bank Plus slot caters to bankrolls of all sizes. The minimum total bet is just 10p and the maximum is £200.

For OJO’s amigos that aren’t ready to bet with their own cash, there’s also an Action Bank Plus slot demo. You can practice your safe-cracking skills without risking any of your bankroll before you play Action Bank Plus for real.

The Action Bank Plus slot might not be the most visually impressive casino game out there but there’s still a lot to love about it. With its pick-a-box-style Vault feature to kick it off and the addition of double symbols, the title’s Free Spins feature provides plenty of variety in the gameplay.

Bust the Bank by Microgaming. This one’s a bit more a typical online slot but it’s still themed on breaking into a vault and making off with the contents. OJO really loves the Free Spins feature, where Wilds are stacked on the first and last reels.