Ace of Spades Slot: A Reimaging of the Classic Slot

The Ace of Spades slot machine isn’t the only thing to get excited about at PlayOJO. New players can look forward to a generous 50 Free Spins with absolutely no wagering on their first deposit. Not bad at all! 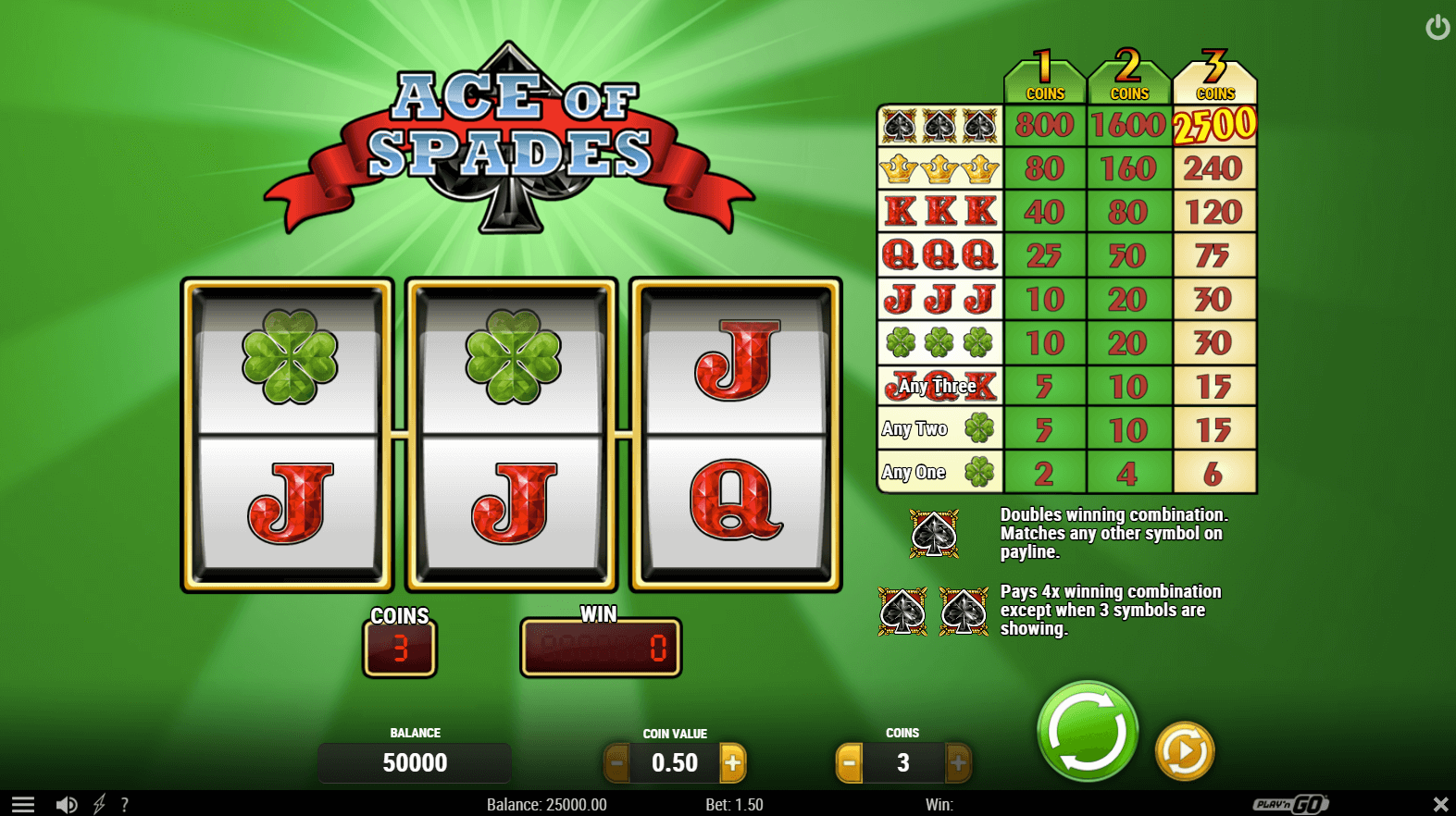 Play ‘n’ Go’s Ace of Spades slot game is a real blast from the past. There’s not much in the way of fancy animation or artwork but OJO knows that some of you lot love stripped back online slots.

The game is loaded with classic casino imagery – face cards from a standard deck, four-leaf clovers, and of course, the spade symbol itself. This, coupled with the vintage fruit machine sound effects, makes the Ace of Spades slot feel just like a real-world one-armed bandit from yesteryear!

Ace of Spades slot machine features just three reels and a single win line. Players will receive prizes for matching symbols along it. There are also prizes for landing any three face cards (excluding the Wild Ace of Spades symbol) and for hitting either one or two clovers alone.

Although it’s quite a basic game by modern standards, Play ‘n’ Go did include a couple of features to speed up the action. However, it’s important to remind you all to play responsibly – especially when using Fast Play and Auto Play functions!

As a classic casino game, Play ‘n’ Go didn’t load Ace of Spades slot machine with special features. Unfortunately, you won’t find an Ace of Spades Free Spins mode! That said, there are a couple of non-standard features worth mentioning… 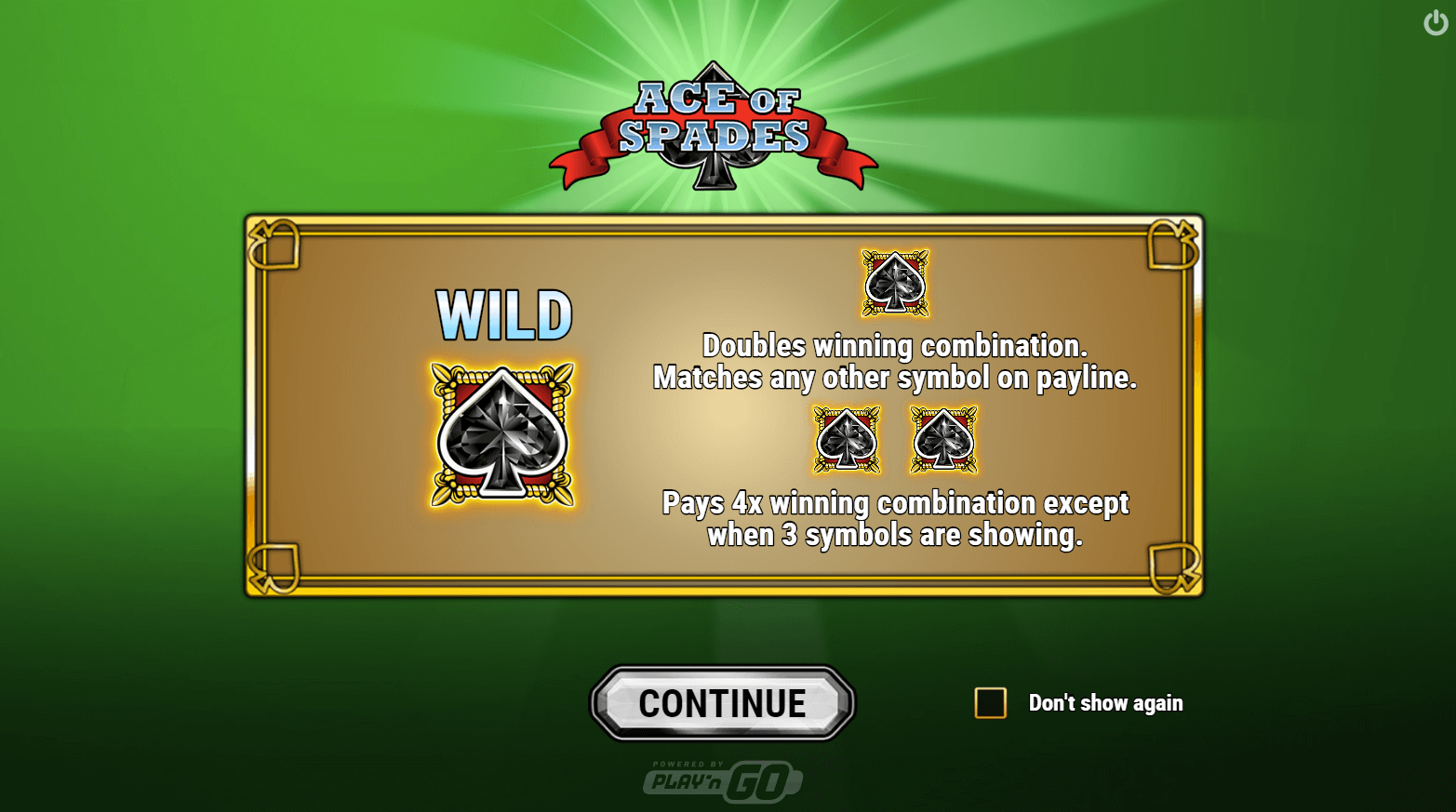 Despite clearly taking inspiration from early real-world fruit machines, Play ‘n’ Go’s Ace of Spades slot does feature a Wild Symbol. The Spade symbol will substitute for any other symbol in the game. It will also make for some bumper wins thanks to the title’s second feature.

When a single Spade Wild Symbol forms part of a winning combination, any wins awarded are automatically doubled. If you’re lucky enough to form a win with two of the Spade Wilds, you’ll receive four times the win quoted on the pay table

With just a single win line, obviously players can’t adjust how many lines are active at once on the Ace of Spades slot. However, they can choose the number of coins and the value of each one bet. With both variables set at their lowest, each spin will cost just 50p. Meanwhile, with everything maxed out, the upper betting limit is £15.

It’s worth noting that only bets using three coins can win the game’s top jackpot of 2,500 coins. This is awarded for matching three Spade Wild Symbols. The prizes for making a winning combination with three coins is 3x the prize for betting just one. However, the game’s top prize doesn’t follow this pattern. There’s an additional 100 coins up for grabs when betting with three coins!

As well as the real-money version of the game, PlayOJO also offers an Ace of Spades slot demo. OJO knows some of you like to try out new games for free first!

If you think online casino games have become too fancy these days and long for a more basic gameplay experience, the Ace of Spades online slot might be perfect for you. OJO loved the inclusion of a few simple bonus features too. They bring a bit of extra excitement to the action. Why not play Ace of Spades slot in the UK today at PlayOJO to see for yourself?

Hit it Hard by Elk Studios. Another 3-reeler, this title uses animations to represent a real-world slot machine. It’s just like sticking a few quid in a bandit at your local boozer!