DoA 2 Slot: Out with the Old, In with the New

The Bandits are on the run. It’s now up to you to save the townies

OJO doesn’t think anyone likes to be dead. So, if he’s given the option to be Dead or Alive, he’d always take alive. However, it’s not OJO who’s in the center of attention today. It’s you, the Sheriff, who’s going to catch all the bandits in Dead or Alive 2 slot!

Wild West has been a gold mine for inspiration in popular culture. From movies to TV shows to online slot games, nothing seems to quench people’s thirst to get a little more of the west. Dead or Alive 2 slot by NetEnt is just another attempt to put the theme to rest once and for all. However, you know very well it’s not going to happen.

Coming back to the game, it’s a 5-reel video game with 9 paylines. If you haven’t realized already, it’s the sequel to massive hit Dead or Alive way back in 2009. It was a bold statement for the time and was quite ahead of the technology in terms of visuals and mechanics.

Dead or Alive 2 slot is a modern take on the same theme that came out in 2019. The game offers a 5x3 layout with 96.82% RTP and high volatility. At the very least, it’s going to be a nail-biting experience for you. 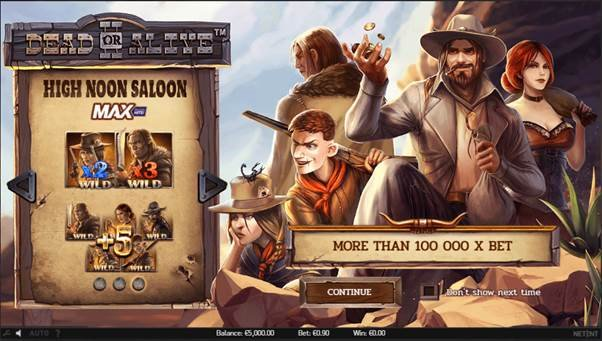 The visuals of this game are astonishing. The graphics are very modern and yet it perfectly captures the essence of that era. Ou can see the iconic Dead or Alive sign on top of the grid. The backdrop has dynamic motion where the air blows over the lantern and the clouds growl from time to time.

The soundtrack of this game is undoubtedly one of the top wild west themes. It sucks you right into the saloons where the bandits are hiding from you. One feature OJO likes very much is that all 9 paylines are marked on the screen so you have a better idea of what’s happening.

The symbols of Dead or Alive 2 slot are just what you would expect. You have the royals, meaning K, A, Q, and J. They pay between 2.77x & 11.11x if you land them on all 5 paylines. These are also the lowest paying symbols of the game.

Then, you have the higher paying symbols including whiskey bottles, cowboy boots, hats, revolvers with holsters, and sheriff stars. Basically, you get all the elements of a classic western theme as symbols. They pay between 22.22x and 111.11x for 5 on a payline.

Last but not least, you have the wild and the scatter. The wild can replace all other symbols and pays up to 166.66x. The scatter is the most powerful and the highest paying symbol with a 277.77x payout! 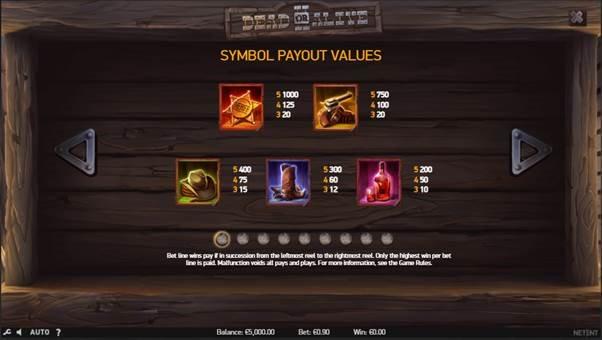 Play Dead or Alive 2 at PlayOJO

On the low volatility mode, you can trigger the Train Heist Free Spins. The Old Saloon round has been retained from the original Dead or Alive and all of your winnings are multiplied by 2 in this round. Lastly, the High Noon round is exclusive for the high volatility mode and you can win a whopping 40,500x the bet value.

If you consider yourself a fan of wild west themed slots, you should most definitely give the Dead or Alive 2 slot a try at this Canadian online casino. Why? Because it’s the most iconic slot in this genre, that’s why.